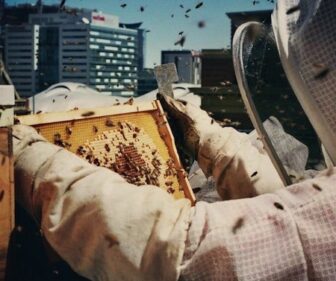 Concrete Progress is an ongoing series of columns by Peter Brewitt devoted to exploring America’s infrastructure. It is part of Orion’s Reimagining Infrastructure project. Special thanks to Melbourne City Rooftop Honey for the image above.

Let’s say we’re honeybees. Nectar is the goal as we emerge from our hive, but we haven’t seen this neighborhood before, so I wing out across the landscape, making a horseshoe pattern as we sort out where we are. Then you fly straight up, high in the sky, taking in landmarks. After a day or two, we know the territory, and you head out to find plum trees. Upon your return to the hive, you tell me where they are by doing a multi-part waggle dance, communicating the distance and direction, and off we go. By the end of the week all our friends have joined us on the plum flowers.

Robert MacKimmie’s bees have been dancing a lot lately. MacKimmie is the man behind City Bees, a San Francisco-based honey-making operation he started in 1996. Placing hives around the city, he collects the honey, performs maintenance, protects the bees from disease and parasites, and spreads the word about beekeeping far and wide. His City Bees now fly all across San Francisco—a bee can fly five miles, one way, in search of nectar—and the greater Bay Area, from San Jose to Tiburon. He’s set up what amounts to a community supported agriculture business—one of the great innovations of our nationwide revolution in local food systems—but instead of fruits and vegetables, his primary product is honey.

For many years, City Bees was MacKimmie’s side gig, separate from his photography and tech careers. In 2009, though, as the economy shifted, Robert MacKimmie looked at his life, thought about the honey he sold at farmers’ markets around the area, and decided that his best move would be to embrace beekeeping as a full-time profession. Five years later, he has 150 hives (5 million bees, give or take), most of them in the yards of people he meets at farmers’ markets and other such gatherings. He works from site to site, harvesting honey and maintaining the hives. The people hosting the hives, along with enjoying the companionable hum of the bees, receive about a case of honey (six pounds!) each year. For a little perspective, a hive’s total annual output is about fifty pounds of honey. Some neighbors object (bees do sting, occasionally), but for the most part, people welcome and even love their bees.

It doesn’t hurt that honey is perhaps the greatest food ever devised. It never goes bad—you can eat honey found in Egyptian tombs. It comes in kaleidoscopic varieties, as many honeys as there are plants for bees to pollinate. Honey provides people with long-lasting energy, without the crash of cane sugar, and people with allergies who eat local honey can feel their sinuses open up. Honey even has antibacterial properties, and has been used to bind wounds. Most importantly, of course, honey is legendarily delicious. The Israelites did not cross the wilderness to find a land of milk and Splenda, nor did the Beatles sing about a taste of molasses.

Last year, with City Bees expanding, MacKimmie faced some concerning expenses. His hope as a full-time beekeeper was to double his seventy hives—but how? The answer was local microlender (and future Concrete Progress column topic) Kiva Zip , which offers small entrepreneurs interest-free loans. Five thousand dollars was all it took, and now Robert MacKimmie and his City Bees are flying high.

Life as a beekeeper isn’t all honey, though. While it’s easy to start beekeeping—buy a hive and a queen, stick it in the yard—maintaining your buzzy little flock is tough. MacKimmie differentiates between beekeepers and bee-havers, dilettantes whose colonies dwindle away after a few cycles. It’s necessary to keep the hives spacious enough for the colony to grow and strengthen in the spring, and to be constantly vigilant against the mites that claim 30 percent of the average apiarist’s bees. MacKimmie defends his hives through an organic technique of introducing formic acid—he compares it to vinegar—into the hives, which disrupts the soft-bodied mites and prevents them from breeding, while leaving the hard-shelled bees alone.

As you might have heard, bees have been in trouble lately. In the mid 2000s, beekeepers began to find their hives mysteriously vacant, the bees vanished. The problem, which was eventually named Colony Collapse Disorder (CCD), spread across Europe and North America and threatened not only the world’s honey, but also much of our food. People depend on bees to a shocking extent—the little insects pollinate a third of our crops, and industrial quantities of bees are trucked all over farming regions according to the demands of the season and the crops. CCD has calmed down lately (no one knows, still, exactly what happened), but while CCD remains a frightening thing, it must be said that it left a surprising benefit in its wake: it made people think about bees. Robert MacKimmie talks about how, when he got into bees in the nineties, beekeepers were few and far between. But over the last decade he’s watched as more and more people, having heard about the importance of bees and the local food movement, started beekeeping themselves.

As I said, earlier, City Bees is a bit like a community supported agriculture program, with honey instead of vegetables, but there are really two CSAs in action here. There’s the one I’ve been talking about—Robert MacKimmie and his honey—and by now you know all about that. The other CSA is run by the bees. Their product is pollination.

Pollination is necessary for flowering plants, of course, and so bees are not only a particularly helpful part of an ecosystem, but an integral part of local food systems. Most cities, for many reasons, have far fewer bees than they did in the past, and the landscape has suffered accordingly. But the City Bees are bringing back San Francisco. As they commute between their hives and their nectar sources, they leave bright flowers and thriving vegetation behind them. Hive hosts find that their trees now hang heavy with apples and plums, and their gardens fill with lush flowers and vines. While people strive to preserve and promote urban green space and natural habitat, all around them the bees are doing the job on their own. As pollen travels buzzily from neighborhood to neighborhood, as honey flows from hive to market to kitchen, as more people tend their own colonies, the city, and its nature, are growing ever more verdant, all thanks to Robert MacKimmie’s bees.