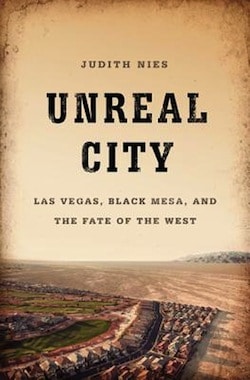 Journalist and historian Judith Nies’s story “The Black Mesa Syndrome,” about how the U.S. government coerced the Navajo and Hopi Indian tribes into relinquishing land sought by mining interests, appeared in the summer 1998 issue and remains one of the magazine’s most frequently cited pieces. Nies’s new book, Unreal City: Las Vegas, Black Mesa, and the Fate of the West, picks up where her Orion article left off; it traces the Black Mesa story to present day, wherein the coal beneath Black Mesa, a four-thousand-square mile area of Indian land in Arizona, became a fuel source for two power plants (one recently closed and the other, the Navajo Generating Station, cited as one of the ten most polluting power plants in the country) sending electricity to Phoenix, Las Vegas, and Los Angeles. Here is the author on how she became involved in the story and became the storyteller for Unreal City, published in 2014 by Perseus Books and included in Amazon’s Top 100 Books of the Year.

I learned about the so-called “Hopi-Navajo land dispute” forty years ago; sixteen years ago Orion published my article “The Black Mesa Syndrome: Indian Lands, Black Gold”; eight months ago Perseus published my book Unreal City: Las Vegas, Black Mesa, and the Fate of the West, which dives deeper into the themes of that article; and a few weeks ago I received an e-mail from the Black Mesa Indigenous Support Group telling me that history was repeating itself. SWAT teams and helicopters had arrived once again on Black Mesa, impounding Navajo livestock, imposing thousand-dollar fines, and harassing the remaining Navajo who still live there.

The reason? Peabody Energy, the largest coal company in the world, headquartered in St. Louis, is in the process of negotiating a new Black Mesa coal lease.

I first came to the story in the 1970s, when I worked in Congress as a legislative aide and speechwriter. I was there when the Hopi Land Settlement Bill was introduced under the guise of restoring lost land to the Hopi, and heard one of my colleagues, who knew that those same lands held one of the richest coal deposits in the U.S., observe: “They’re going to steal those lands fair and square.”

When the bill was turned into law in 1976—the law that became known as the Black Mesa law—I was back in Massachusetts as Assistant Secretary of Environmental Affairs, monitoring environmental legislation and acting as federal-state coordinator for the Boston Harbor Islands Park and Lowell National Park Projects. Since one of the Islands held artifacts from a 17th-century Native American settlement, it required the intervention of the state’s Indian Affairs office, and, as a result, I met the memorable and impressive John Peters-Slow Turtle, a Wampanoag tribal medicine man and executive director of the Massachusetts Commission of Indian Affairs.

Ten years later, Boston became one of the centers in the public effort to reverse the Black Mesa law that required removal of some 15,000 Navajos from their lands that lay over a coal bed—lands that had been presented to Congress as “largely uninhabited” and which were now designated Hopi Partition Lands. Remembering our earlier collaboration, John Peters asked if I could assist the lawyer for the Black Mesa resistance with legislative research.

I discovered that the law originated in 1956, when Senator Barry Goldwater of Arizona, assisted by John Boyden, a Mormon lawyer from Salt Lake City, submitted a bill to set up a special court for the sole purpose of deciding a “friendly suit” between the Hopi and Navajo. The bill directed the court to define boundaries between their reservation lands. Any doubt about the real purpose of the bill was clarified by correspondence between a vice president of Arizona’s largest bank and Stewart Udall (then a freshman congressman from Arizona who introduced Goldwater’s bill in the House), which stated that any royalties due the Indians would be deposited “in a trust account” while mining proceeded. John Boyden, appointed as the Hopi tribal counsel by the Bureau of Indian Affairs, represented Peabody Coal and its parent, Kennecott Copper, at the same time he was representing the Hopi, a clear violation of legal ethics. The Justice Department opposed the bill in both House and Senate hearings, arguing that it was an improper use of a three-judge court, that there was no legal issue for such a court to decide, and that all the boundary issues involved were political.

In short, what we see here is forty years and a billion dollars of taxpayer money expended to destroy a traditional indigenous culture through a bogus court issuing a decision based on an invented legal suit. I followed this story for four decades because it reveals a diamond-cut example of the corporate takeover of American political life along with erosion of the political will to deal with the pressing environmental issues of water, air, public lands, and climate change.

On the other hand, it also reveals how nonlinear change can happen. Orion readers should know that my frequently cited 1998 article is still distributed by the Grand Canyon Trust in Arizona and given to volunteers for the Black Mesa Indigenous Support Group. Last April, when students demonstrated at Washington University in St. Louis, a school unknown for student activism, they demanded university divestment from Peabody Energy stocks and called for the resignation of Peabody’s CEO Greg Boyce from the university’s board of trustees. The New York Times covered the demonstrations (which lasted for sixteen days) and captured in their photos hand-held signs reading “Solidarity with Black Mesa.”

Black Mesa is a story with a long tail.

Judith Nies is the award-winning author of the books The Girl I Left Behind, Nine Women, and Native American History, which won the Phi Alpha Theta prize in international history. She lives in Cambridge, Massachusetts.