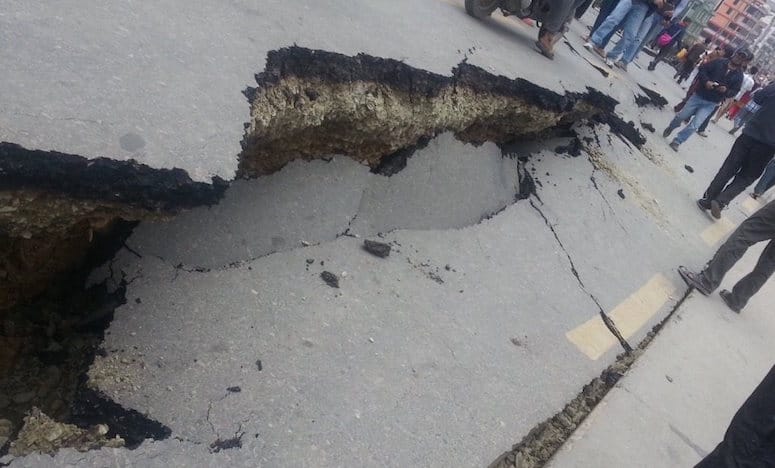 The crows of Nepal were the lucky ones. With a pump of their wings, they could vault themselves into steady air, while humans and their habitations remained fixed to the heaving earth below. The 7.8 magnitude earthquake that shook Nepal on Saturday crumbled homes and shops, reduced historic and holy sites to fields of rubble, and set off a cascade of avalanches at higher altitudes. The quake, sixteen times more powerful than the one in Haiti in 2010, was followed by dozens of aftershocks, some with a magnitude greater than 6.0. By the time night fell on Monday, the death toll had reached four thousand, and that number is expected to climb.

The epicenter of the initial quake was in the Gorkha and Lamjung Districts of central Nepal, where video footage showed slumped roofs and piles of bricks where homes once stood. In Gorkha, where 300,000 live, one aid worker reported a village “all but gone.” About fifty miles southeast is the densely packed capital of Kathmandu, where destruction was scattered but severe. There were reports of damage and deaths from as far away as Mount Everest, 150 miles away, where at least eighteen climbers died and one hundred and forty others were rescued by airlift last night, and in the neighboring countries of India and China’s Tibet Autonomous Region.

“Our history is gone,” said one truck driver, assessing the devastation in Kathmandu, where Buddhist and Hindu temples crumbled, along with the 100-hundred foot Dharahara Tower, a popular tourist attraction and UNESCO-recognized historical monument built by Nepali royalty in the nineteenth century. The Kathmandu Valley is home to seven UNESCO World Heritage Sites and the majority reported damage.

Some have said it was in a way fortunate that, across most of Nepal, the weather was fairly mild. It was neither the depths of winter nor the monsoon season. The earthquake struck on a Saturday, when children weren’t confined within the walls of poorly built schools. The initial shock happened during daylight hours, when the majority of the six million people who live in the affected region were not tucked into their beds, where they would have been even more likely to be trapped under debris.

But these hypotheticals about timing underscore the fact that this earthquake was expected. The last earthquake close to this magnitude hit Nepal in 1934, eighty-one years ago. The seismic record, which reaches back seven centuries, shows that these great releases of geological tension along the Himalayan mountain range happen every seventy to eighty years.

A little more than four months ago, Rubeena Mahato, a former journalist for the Nepali Times and public policy student at the University of Oxford, wrote a piece for CityMetric warning of the imminent disaster. Kathmandu “looks like a catastrophe waiting to happen,” Mahato wrote. Just two weeks before this series of seismic events began, the National Society for Earthquake Technology-Nepal, in Sainbu, and GeoHazards International of Menlo Park, California, updated their earthquake scenarios for the Kathmandu Valley, warning of a dire need for risk management, an action plan, improvements in public school structures, and citizen awareness.

The natural disaster script will continue to play out over the next days and weeks, as the death toll rises and the crippled country scrambles to prevent waterborne and infectious disease outbreaks from emerging in the crowded tent cities people have set up to survive. The USGS is predicting a 33 percent chance that fatalities in Nepal will grow to at least ten thousand and that economic losses will reach ten billion dollars, possibly exceeding the GDP of the entire nation.

But once the tremors subside, and those who can be saved are saved, and life settles into a skewed new normal for the transformed nation of Nepal, it will be time to rebuild. The question is how.

“Earthquake safety and sustainable development should be guiding principles for the state in the days to come,” wrote Rubeena Mahato by e-mail this morning. She did not say in the years to come, but the days to come, because the need to get a roof overhead is urgent and Nepalis cannot wait. But inexpensive solutions exist to rebuild cheaply, and with earthquake safety in mind. A feature in National Geographic after the Haiti earthquake illustrated examples of straw bale houses for regions such as Central Asia. Light and available, as well as insulative, straw bales combined with a gable-structure roof offer more give than the unreinforced masonry structures that tumbled last weekend. Rebar is ideal, but also expensive, but bamboo and even plastic mesh within a concrete wall have proven helpful.

As relief money and international aid floods into Nepal in these first moments after the disaster, it is crucial to remember Rubeena’s words once the news cycle moves on. It is the only hope for each Nepali child who has been pulled from a pile of debris over the last few days when the earth was in convulsions. It is the only way they stand a chance to live out their elderly days in a house that won’t collapse when the next big quake comes, which it invariably will.

Meera Subramanian is an independent journalist and Fulbright scholar. Her book, A River Runs Again:
India’s Natural World in Crisis, from the Barren Cliffs of Rajasthan to the Farmlands of Karnataka, is due out in August. Her most recent article for Orion, “The City and the Sea,” appeared in the March/April 2014 issue.