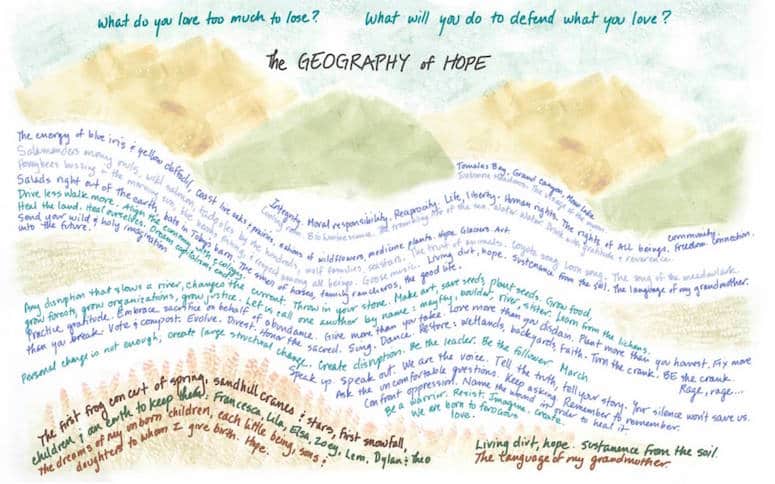 Image courtesy of Laurie Durnell and Kathy Evans of The Grove Consultants, Intl., and Sirima Sataman of Ink.Paper.Plate Studio.

Since 2008, the coastal village of Point Reyes Station has been home to one of northern California’s most exceptional literary festivals. Founded and presented by Point Reyes Books, the Geography of Hope conference is now in its fifth year; the 2015 gathering, of which Orion was a media sponsor, took place from March 13 – 15. Here’s the second of two dispatches from the festival—read the first here.

Humans constantly generate new words, and those words continually shape us. We are haunted by language. We are the stories we tell each other and ourselves. And when we fall into despair, we dip into the wellspring of literature, music, and art to be reinvigorated.

That is the value of the eco-cultural conference called The Geography of Hope: it bends our consciousness and refreshes our lexicon. My colleagues at Oregon’s H.J. Andrews Experimental Forest call it “re-story-ation.” Before we make new policies, we need new metaphors. It is the reason writers and artists play a crucial role in conservation history. Where would the movement be without the literary talents of Thoreau, Muir, Leopold, Stegner, and Carson?

Aldo Leopold inspired the 2013 Geography of Hope conference; the visage of Rachel Carson overlooked our recent gathering. The theme was Women and the Land, and our goal was to map “a new geography of hope.” On a wide strip of paper, two artists outlined a landscape on which we shared our ideas for a way forward—a braided river of words that asked, “What do you love too much to lose?” and “What will you do to defend what you love?”

The result was a collective statement of our values. In the realm of social media, this crowd-sourcing of meaning is sometimes called a folksonomy or social indexing. It is a bottom-up version of traditional taxonomy, and we read it aloud, together.

Conference co-chairs Kathleen Dean Moore and Robin Wall Kimmerer offered their own additions to our folksonomy, and their words have already begun to shape my own thinking.

Moore donated the word avulsion, which Wikipedia defines as “the rapid abandonment of a river channel and the formation of a new river channel.” We don’t need to dam the river, she said—we must re-direct it. A few well-placed rocks can shift the entire flow. Sometimes those rocks are words.

Kimmerer spoke of a “grammar of animacy.” The English language refers to the non-human world as “it,” while pronouns such as “he,” “she,” and “we” are reserved for members of our species. Western culture needs a new singular pronoun to describe the other members of our biotic community. The word she proposed is ki (pronounced “kee”). The good news, she added, is that we already have the plural pronoun: kin. To learn a new language is to change your outlook on the world.

Kimmerer also introduced us to the Thanksgiving Address of the Haudenosaunee people. These are the “words before all else,” the recitation that begins each meeting of the tribes of the Iroquois Confederacy. It is their expression of gratitude to everything in their world: plants, animals, sun, moon, and winds. Each section of the address concludes with the phrase, “now our minds are one.” As my friend Curt Meine points out, wholeness of mind can be both a communal and an individual aspiration.

The Thanksgiving Address identifies the things that we can agree upon, the values we share in the face of our obvious differences. That would seem to be a great place to begin any collective project.

Finally, I should mention the improvisatory singing of the vocalist Rhiannon, who performed several times at the conference. Her guttural utterances remind us that speech is both sign and signifier. We understand as much from pitch and tenor as from literal meaning. One song sounded vaguely like French, and she encouraged us each to sing in our own unique language. Later, with a collective hum, she led the entire audience in a series of harmonies that ultimately formed a uniform tone. All things do eventually merge into one.

For more information about the Geography of Hope conference, and to see a slide show from the event, visit the Point Reyes Books website.

Steve Dunsky is a documentary filmmaker for the U.S. Forest Service. He co-directed Green Fire: Aldo Leopold and a Land Ethic for Our Time, which sparked the 2013 Geography of Hope Conference.