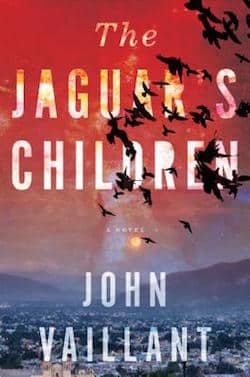 John Vaillant’s debut novel, The Jaguar’s Children, opens with a text message from Hector, a young man from Oaxaca, Mexico: “hello i am sorry to bother you but i need your assistance — ” Hector has been sealed inside the metal tank of a water truck along with a group of others, and was heading across the U.S./Mexico border when the vehicle broke down, somewhere in the desert. Hector’s only hope of rescue seems to be AnniMac, a contact in his friend’s cell phone, and to whom Hector’s long messages form the novel’s text.

The Jaguar’s Children is a harrowing and beautiful portrait of interconnection, and the vast cultural, economic, and ecological processes that can compel a person to cross a desert. Vaillant is the author of two previous books of nonfiction, The Golden Spruce and The Tiger (a finalist for the 2011 Orion Book Award); this debut novel came out in January. A review of the book appears in the May/June 2015 issue of Orion, and is written by Julia Shipley, whose profile of Paulus Berensohn was published in the November/December 2014 issue.

Julia Shipley: One of the beauties of publishing a novel is that your title is not subjected to including that go-get-’em subtitle. With The Golden Spruce there was A True Story of Myth, Madness and Greed, and with The Tiger it was A True Story of Vengeance and Survival. But with your first novel, it’s simply: The Jaguar’s Children. Did the process of writing without the “true story” subtitle feel especially disorienting or exhilarating in any way? What was different about telling a story without confirmed facts, without footnotes, or without the frame of “nonfiction”?

John Vaillant: The way I see it, The Jaguar’s Children has the best subtitle ever: A Novel. Subtitles aside, the shift to fiction has been both exhilarating and disorienting. Magazines in which I’ve published nonfiction pieces, like The New Yorker, The Atlantic, and National Geographic, all have rigorous and comprehensive fact-checking protocols, which is great. But it means you cannot deviate from the verifiable—even a little—and I brought this ethic to my nonfiction books as well. Fiction has been exhilarating because it allowed me to slip the fact checker’s leash and be free to sniff every hydrant and signpost I want, to interpret it however I like.

But it took some getting used to. My first reaction to all that freedom was like the old librarian in The Shawshank Redemption: finally a free man after fifty years in prison, he’s overcome by anxiety because he can’t handle the speed of things on the outside—all the choices he’s now “free” to make. In the end, all he wants is to return to the safety and order of the prison library.

After my initial panic, I discovered that you can lean on fictional characters almost as heavily as you can on real ones. By sticking closely to historical facts (e.g., there really was a corrupt and murderous governor of Oaxaca; there really are jaguars flanking Mary on the facade of the Basilica de la Soledad; dead migrants really have been found in parking lots and rail yards), I could put these in the way of my characters and watch what they did. There was a brief training-wheel period, when the characters were new and not well formed, and I needed to kind of help them into existence. But once they were up and running, they started calling the shots, telling me what was on their minds, and responding like themselves, instead of like me in drag.

I would not have written about GMO corn, or known about suicide seeds, if Hector’s friend, Cesar, hadn’t been working in corn genetics and found himself in a terrible moral quandary that I then had to research in order to understand. Ultimately, it was a strange and wonderful process of give and take—a guided hallucination—that went on for years.

Shipley: It’s funny that you mention The Shawshank Redemption. I just watched that movie again a few nights ago, and in addition to the paradox of the librarian’s freedom as a correlative to yours as a overwhelmingly liberated writer, both that movie and The Jaguar’s Children explore (and now I’m thinking of the movie’s lead character, Andy Dufrene) what it’s like to endure a very interior journey to freedom. What I mean by this is: in The Jaguar’s Children, your main character, Hector, is imprisoned inside an empty water tank on his way across the U.S./Mexico border to experience—we hope—a form of freedom. It’s a road trip, for sure, but unlike most road trips, this one is so interior.

Do you remember the Russian Kursk submarine disaster, which was in the news in 2000? One man took up pen and paper as he waited on the ocean floor for rescue. He began his goodbye letter with, “I am writing blind.” Stranded in a water tank but near no water at all, Hector, in a way, is kind of talking blind. Which connects to my question: What do you think about narrative as a form of salvation? Certainly, Hector’s storytelling preserves his life, spiritually-psychologically, as his water and food run out.

Vaillant: I had never thought of it as a road trip, but I suppose it is. The difference between the Kursk letter and this is that Hector isn’t saying good-bye—not until the very end. He experiences despair, for sure, along with the gamut of other emotions, but I think there’s a part of him that simply can’t accept that this is how it ends, and it’s this incredulity—aka hope—that drives him and also the novel. In other words, as one-sided as Hector’s soliloquy may be, he’s in active communication to the end, not only with the idea of AnniMac, and with posterity, but with his unconscious friend, Cesar, a guy Hector admires and envies, and who’s always been moving too fast to pay attention to him. But in the water truck, he’s right where Hector needs him to be—captive and unable to interrupt (kind of like a reader, or the wedding guest in The Rime of the Ancient Mariner).

So, yes, it’s through this—the act of speaking, of conjuring the world outside and those who matter to him most—that Hector tries to save himself. Each word is both a step away from death and a middle finger to the coyotes. In this sense, Hector’s is a mountain climber’s (or laborer’s) work ethic—one painful step, one bucket of cement, one hard-won word after the other… Until you get there, or die in the attempt. Modern veterans of Mount Everest and polar expeditions sometimes refer to their journeys as “sufferfests.” The challenge, under such relentless circumstances, is: how do you keep your spirits up, and body and soul intact? This is what we get to see Hector struggling to do, moment by moment.

As for a larger purpose beyond storytelling, I think a lot of stories smother under the weight of the agendas attached to them, and I didn’t want that to happen here. My primary obligation to readers is to offer an engaging tale that will keep them turning the pages—and that gives them a potentially transformative experience they wouldn’t have elsewhere. Second, I want to offer an authentic window into a parallel world that, while closed to most of us, is closer than we might realize. At the personal level—because it is in the act of writing—my art and craft—that I’m able to manifest the most potent devotion, this book is also an homage to a place and people who gave a lot to me and my family, and to whom I’m deeply grateful. If readers want to take this story further, along the lines of John le Carré’s invitation to engage at the end of The Constant Gardener, that would be wonderful. But at the bottom line, the novel has to hold up on its own narrative merits, independent of current events, or the need for action. The difference between this book and The Tiger is that The Tiger’s characters are real people who, figuratively speaking, gave me their lives, and that is a grave responsibility. In my view, this kind of verisimilitudinous fiction is similar, but it’s not quite as immediately or mortally personal.

Shipley: I wonder about the architectural echoes in this book: Were you aware that the reader can be reminded of the situation of the thirty-three Chilean miners who, in 2010, were trapped underground with only a three inch pipe to the outside? Or were you hoping the reader might think of the stranded water truck as a kind of landlocked slave ship?

Vaillant: I actually had the pleasure of blurbing Héctor Tobar’s great book, Deep Down Dark, about the Chilean miners, and was struck by similarities—specifically how Latino laborers refract hope and despair through the kaleidoscope of Catholicism overlaid on indigenous beliefs. No connection between the pipes though: I was dealing solely with water truck anatomy. I like the slave ship analogy a lot, but I was more caught up with a Trojan Horse/9-11 jets comparison.

Shipley: Have you read Denison, Iowa by Dale Maharidge, which opens with (the true story) of eleven bodies discovered in a sealed but otherwise empty grain car in Iowa? “When the train stopped in Kingsville, no one opened the hatch,” Maharidge writes. “The first law officer on the scene was Crawford Country Sheriff Tom Hogan. He noted their bodies were evenly spaced around the circumference… all feet pointed into the well in the center… It’s like they’re flower petals, he thought.” I think The Jaguar’s Children is like a flower. The water tank is the center of tension around which these stories loop out and come back—like petals. As I read I felt the contrast between the stench and damp and dark and each sound recording’s beautiful foray beyond it.

Vaillant: I’m aware of and was inspired by (if that’s the right word) the Iowa boxcar case. And I love the idea of petals. The structure has some similarities to Slumdog Millionaire, which centers around the police state in a flower-like way as well.

Pick up the print edition of the May/June 2015 issue of Orion to read Julia Shipley’s review of The Jaguar’s Children.