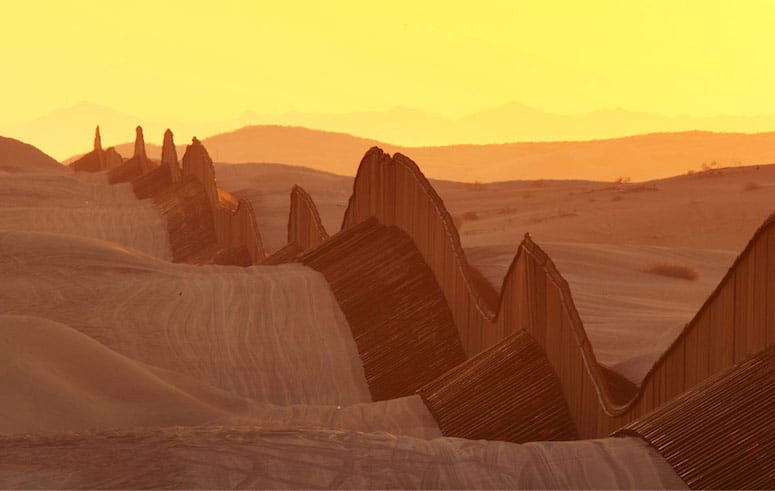 We have wild jaguars in the United States. Did you know? Right now, as you read this, powerful two-hundred-and-fifty-pound cats with dappled golden fur are cruising the canyons of southern Arizona. Jaguars are immensely strong—they can crunch turtles like an Oreo, and they carry around prey four times their weight. But, as with so many apex predators, they’re endangered: the Fish and Wildlife Service has set aside more than a thousand square miles along the Mexican border as critical habitat for jaguars. The prime threat to our American jaguars? A wall, which is a uniquely infrastructural problem.

When we think of infrastructure, it’s almost always in terms of connection and exchange: roads, bridges, pipelines, telephone lines, waste sites. But walls (and fences) are one kind of infrastructure that, obviously, does not connect people. They have, of course, been tremendously important throughout history, from China to Berlin. Usually these walls are meant to keep people out (or shut people in), but sometimes they’re for wildlife. Probably the most famous example is Australia’s Rabbit-Proof Fence (actually several fences) that was supposed to exclude invasive rabbits.

The barrier threatening southern Arizona’s jaguars is the U. S. – Mexico border fence. This is a series of barriers built along about a third of our 2,000-mile southern border at a cost of about $2.3 billion. (I need to say, before I go further, that I’m not talking about the fence in terms of immigration policy or human rights or the economy or electoral politics. All of that is important, but it’s for someone else’s column. I’m only talking about it in terms of ecology.) Animals are not aware of the border as they cross from Mexico to the United States of America, and they are not able to hire a coyote, of any kind, to get them across.

My first year in graduate school, I read a paper in which the authors laid out the state of twenty-first-century nature. There was a great map of the world’s remaining High Biodiversity Wilderness Areas. There were only five: the Amazon and Congo rainforests (aka the Usual Suspects), Papua New Guinea, a patchy swathe of southern Africa…and the arid region around the U. S. – Mexico border, covering most of the American Southwest and north-central Mexico. The area near the border is dry, but it’s mountainous, with many microclimates and hardly any people. I once spent a week in the desert where California meets Nevada, and an ecologist out there told me that it’s not unusual for a dedicated naturalist to find plants, even trees, that haven’t yet been described by science. The border fence cuts right through these kinds of places.

What does this mean for the jaguar? Jaguars, like most large predators, consume a tremendous number of calories every day and therefore require big territories, full of deer and javelinas, in which to hunt. An individual male jaguar may demand up to fifty-three square miles, and pretty much all the jaguars that have been documented in the United States have been male. The source population is in Sonora, Mexico. The fence will impede all of this: it will limit their territories and intensify competition between individuals. It’ll also make it much more difficult for jaguars to re-establish a breeding population north of the border, effectively reducing our jaguar population to a few escaped zoo animals. To ensure contiguous habitat south of the border, conservationists from Panthera (a group that advocates for wild cats) are at work on the Jaguar Corridor Initiative, which seeks to link the cats’ habitat from Argentina to Mexico. It would be a shame if such a mighty project—and a mighty cat—had to halt at the border.

Of course, jaguars are only the most charismatic predator in the border region. The area also hosts ocelots, pumas, Mexican wolves (which the Fish and Wildlife Service has been trying to reintroduce to New Mexico), and a few brown bears. The border fence will affect all of them.

Fortunately, parts of the fence line are relatively passable for wildlife; some spots are engineered to stop vehicles rather than people. But these areas are more likely to correspond with roadways than heavily-used wildlife corridors. Going forward, with border security only likely to tighten, hopefully a few of those billions of dollars will go toward ensuring that wildlife can readily cross the border where they need to. But many wildlife laws (the Endangered Species Act, the National Environmental Policy Act) are waived as the Department of Homeland Security builds out the border wall. Scientists and wildlife advocates have been pushing for a more intelligent approach—via wildlife passages, for instance. We’ve seen them work in Canada and the U. S. Perhaps they can be part of the conversation about the southern border wall, too.