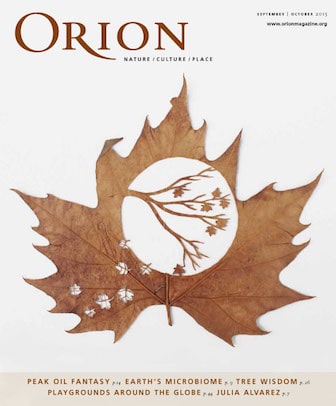 Fall in New England is glorious and quick. It seems like only days ago that katydids chattered from the green trees, and already the air is crisp and the hills ablaze with color. People from the big cities have arrived, walking the quiet roads in their wool jackets, staring up at the leaves. The season is so vivid in this corner of the world that it makes a kind of sense that it barely lasts a month—it’s unsustainably beautiful.

Fall, of course, marks the earth’s yearly transition from fecundity to rest, from birth to dormancy. It’s a season that might encourage a sort of maturity: like the earth, we, too, could learn to accept loss with grace, even gratitude. That’s one of the lessons in Julia Alvarez’s piece in the new issue of Orion, “The Practice of Gracias.” It’s about her visits with Jhonny Rivas, a Haitian man imprisoned in the Dominican Republic for attempting to organize on behalf of his fellow Haitian workers—and a man who has maintained such grace throughout his situation that, according to Alvarez, he’s “far richer than most of us.”

But one need not face such harrowing personal circumstances to cultivate a sense of gratitude for what one has. Our harrowing energy and climate circumstances will do just fine, says Charles Mann, whose essay “Peak Oil Fantasy” also appears in the issue. In it, Mann attempts to dismantle the popular idea that we’re running out of fossil fuel—because the real problem, he says, is much bigger and more dangerous: climate change.

Also in the issue are other variants on the theme of loss and grace: there’s a piece by a young woman whose relationship with amphibians helped her overcome anorexia; a dispatch from immigrant communities planting gardens in the image of their native landscapes; and a profile of a musician who’s turning the winds of New Orleans into song.

As usual, though, there’s much more in the print edition of the magazine, from J.B. MacKinnon’s short story “The Trial of Christopher Columbus,” to photographs of playgrounds around the world, to a meditation on one writer’s favorite natural object—the acorn. To read it all, pick up a copy of the September/October issue of Orion at our online store, or simply subscribe.