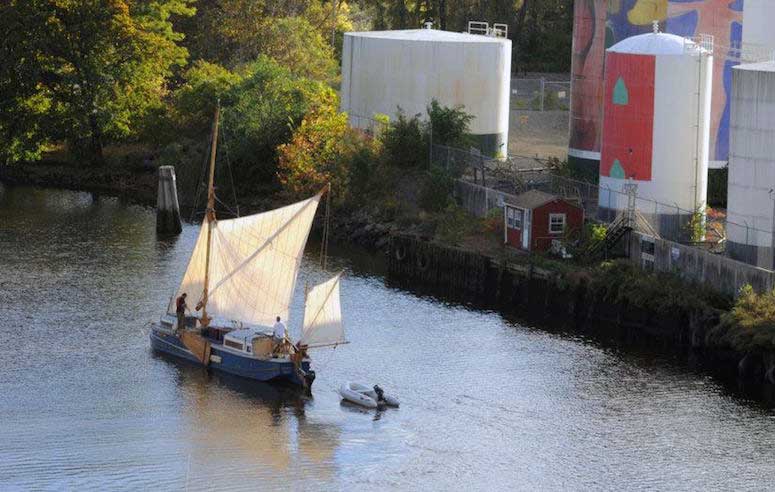 When I ran tidepooling expeditions on Orcas Island, Washington, I often looked out past the islands to the Strait of Georgia and thought of the old explorers that sailed these waters in the eighteenth and nineteenth centuries. I thought of the square-rigged frigates, gliding silently through the mist, the water only broken by a bird or orca. I thought of the captains, who must have struggled between taking in the distractingly gorgeous scenery and worrying over finding a decent anchorage to get fresh water. I thought of the natives, sitting in their canoes and watching the billowing sails—maybe from the very beach I was on—and wondering what they were about. This was usually as far as the daydream got before I had to turn my attention to my twelve-year-olds and urge them to refrain from whacking one another with bull kelp. On the way back up from the beach, I reflected, a little ruefully, that all the ships I ever saw on the Salish Sea were powered by oil.

Until now. For the last five summers, the Salish Sea Trading Cooperative has been sailing vegetables, cider, and other produce between Ballard, north of downtown Seattle, and Port Ludlow, on the Olympic Peninsula across Puget Sound. Sometimes, the ships bring Seattle products (like transcendently delicious Theo chocolate) out with them, but in this region, as in most places, the hinterland supplies the city.

The co-op takes a very progressive approach to its business. It is essentially a CSA, with twenty to thirty members, driven by wind and a belief in the future. The co-op is worker-owned and runs on a peer-sharing system, wherein its sailors use their own ships. It’s still early in the venture—the people of the co-op have other jobs as well—but they expect to make a profit some time this year.

Yet the co-op is a pragmatic organization. It was launched in the depths of the Great Recession, and since then members have married idealism and business, building up partnerships with other nonprofits, insuring their vessels for commercial use, and finding a lawyer who understands their mission. As of last year, the co-op is a USDA food stamp acceptor, allowing it to reach people not often served by CSAs. In order to strengthen the co-op’s fleet, members plan to add a small (thirty-five feet or so) cargo boat, and to fill that boat with diverse goods, not just food but bike parts, marine supplies, even malt for Seattle’s craft breweries. They’re looking to expand beyond Port Ludlow to Bainbridge Island, and perhaps one day there will be routes into the south Puget Sound and farther to the Olympic Peninsula and even the Canadian side of the sea. 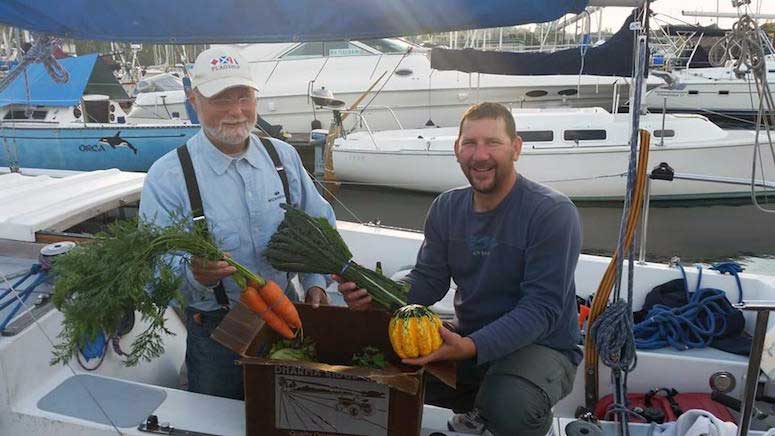 Members of the Salish Sea Trading Cooperative ship produce between Seattle and the islands of Puget Sound. Photograph by Kathy Pelish.

I expect the business to thrive. Partly because Western Washington embraces progress and is open to sustainable ideas, but also because the Salish Sea is a difficult place to serve by road. If you try to drive from Seattle to, say, Port Townsend (only about forty-five miles as the cormorant flies), you have to ride all the way down to the Tacoma Narrows Bridge and then up the narrow, winding stretch of Route 19 to the Kitsap Peninsula and across the Hood Canal. That’s 111 miles. When people cross (as they often do—many live on the islands or peninsulas and work in the city) they use the big, lumbering Washington State ferries. In my Orcas Island days, I rode those ferries many times, and I feel some ongoing affection for them, but they burn more than one thousand gallons of diesel a day. The co-op’s ships do not do away with oil use—they have motors for crew safety and port rule compliance, and to make the Coast Guard, which has been supportive in general, comfortable with the system. But about 80 percent of the ships’ run is powered by wind.

This wind is blowing well beyond the Salish Sea. In the Great Lakes, Dragonfly Sail Transport is zipping produce around northwestern Michigan. In the East, the Vermont Sail Freight Project is performing a similar trick, running maple syrup and potatoes from the Lake Champlain watershed down through the old Champlain-Hudson waterway to New York City. On the high seas, the Dutch vessel Tres Hombres is running chocolate and rum from Latin America and the Caribbean across the ocean to Europe. Columnist, inventor, and DIY rockstar Tim Anderson calls these “heirloom technologies;” we’re rediscovering the sail just as we’re rediscovering the delights of heirloom apples. But it’s not about returning to the days of the HMS Constitution; much as modern wind turbines don’t look like old Dutch windmills, twenty-first-century sailors are combining modern technology and communications with the old-fashioned know-how of our great-grandparents to build a new, old shipping economy. Look for sails on the horizon again.