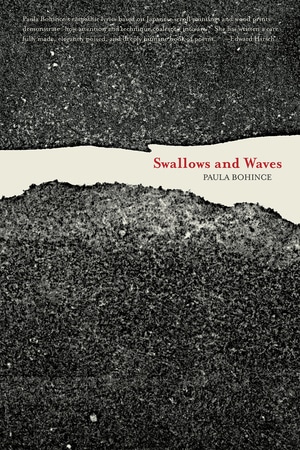 The sixty poems collected in Paula Bohince’s newest book were inspired by the scroll paintings and woodblock prints of Japan’s Edo period (1603 – 1868). One of them, “Mandarin Ducks and Snow-Covered Reeds,” which appears below, was published in the March/April 2014 issue of Orion. Swallows and Waves is out now from Sarabande Books.

The way that nature is represented by such artists as Hokusai, Hiroshige, Koryūsai, and others resonated with me so deeply, so quietly, that when I began Swallows and Waves, I found myself responding to the art as one would the company of a patient friend, by turns listening and confessing.

Their emphasis on clarity and harmony seemed to suggest an egolessness, and it made me want to try and respond with the same kind of attitude, which felt like a years-long spiritual exercise. I came away changed.

I’ve always found nature to be profound, overwhelming, almost frightening in its imperative to stand inside of life and be awed. Inside the paintings, everything had a consciousness with which to wrestle: the peonies, the sea, the wind, Mount Fuji.

A sated owl in a tree, a moonlit lotus blossom in a pond, a tiger licking its leg at dawn—all of these seemingly simple depictions provided moments to pause and consider what might be true, universal, eternal. A waterfall’s tragic trajectory: to die, over and over, and again and again be revived as ghostly foam; the heavy heads of chrysanthemum transformed into the heads of exhausted new mothers, remembering their youth.

These artworks became a great solace. Their constancy and generosity felt parental, or like stroking the mane of a horse, seeing myself reflected in its huge, patient eye. In their presence, I felt the miracle of art, how it forges new thoughts and emotions across centuries, culture, language. The hands that made them now less than dust. And yet.

When one dives, separate from her mate,

She peers through water, assuring this.

When the crippled reeds rehabilitate, begin

their constant arc toward Spring,

of-heart. From above or beneath, how

a body will twist, intuiting fear

and replacing it with here-ness, exhibit of

faithfulness. Wordlessly saying Be not afraid,

Beloved, for the present exalts us!

Paula Bohince is the author of The Children and Incident at the Edge of Bayonet Woods; her poems have appeared in The New Yorker, Granta, The New York Review of Books, and elsewhere. She lives in Pennsylvania.