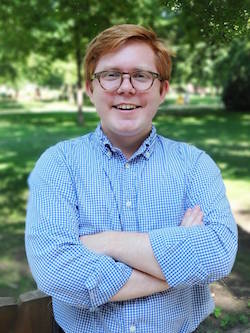 In the past decade, fracking for natural gas has brought rapid change to landscapes and communities across the country. A new anthology of writing on the subject, Fracture: Essays, Poems, and Stories on Fracking in America, investigates its nature, extent, and significance. The collection includes work from many Orion contributors, including Rick Bass, Kathleen Dean Moore, David Gessner, and others; it’s out now from Ice Cube Press. One of the book’s editors, Taylor Brorby (who’s also Reviews Editor at Orion), took our questions.

Tell us about the origins of Fracture. Why produce a collection of writing about fracking? What’s your connection to the subject, and how did your interest turn into a book-length project?

Fracture happened on a whim. I went to a book release party in Ames, Iowa, and met Steve Semken, the publisher at Ice Cube Press. We discovered that we shared a mutual love for the writer Paul Gruchow and the conversation flowed from there. Steve asked where I was from and I told him how I had just moved to Ames from the Bakken oil fields, where I spend my summers writing. I mentioned how shocked I was that no one had done an anthology of creative writing on fracking. Steve said that that was a good idea, and I took the cue—I rushed home, sent Steve a query letter the next day, and the project began.

My interest in fracking came about because my home is on fire. I come from western North Dakota, where the badlands are my backbone and the Missouri River is my main artery. It’s the land I know better than any other. I’ve climbed buttes, been chased in the badlands by a swarm of bees, sat among sweet sage to watch the sun set. But this is also a place that’s been ripped open due to fracking (and not for the first time: North Dakota has had two previous oil booms). But because fracking often happens in the middle section of the country, in states like mine, it’s not really news. Most people go to the coasts for vacation—they don’t go to rural North Dakota or Oklahoma—and so it’s easy for them to forget about what happens there. I wanted to help create a book that made people fall in love with those places; I wanted a book that helped highlight the fact that fracking isn’t just relevant in the middle of the country. Its effects are felt from coast to coast.

I took Wallace Stegner’s This is Dinosaur, Rick Bass and David James Duncan’s Heart of the Monster, and Terry Tempest Williams and Stephen Trimble’s Testimony as my examples. All of these books were produced in record time in response to a particular, urgent subject—I think we took a little longer (about a year) to assemble this brick of a book.

Fracture addresses the ongoing story of fracking in America in a variety of ways, including through nonfiction, fiction, and poetry. What do you feel literature can bring to our understanding of fracking, and what can, say, a poem or a short story do that a piece of reporting cannot?

The question I’ve been mulling over is this: Can a poem stop a pipeline? If we have art that speaks deeply to us, doesn’t it make sense that art can also move us to re-envision our place on the planet, our connection to other animals, to ecosystems? We are bombarded with journalism every day, but stories, poems, and essays have a way of staying with us. I had to memorize poems in school—can you imagine someone reciting a poem about fracking at a public hearing? I’ve seen it done; people go silent. That’s the power of what good art can do.

You’ve put me in a corner! You might as well ask me to name my favorite nephew. The entire collection is designed to be read front to back, but also with the idea that people will skip around—so we’ve organized recurring themes to help the reader however she might encounter the book. We wanted to begin with how oil forms, so Barbara Hurd’s “Fracking: A Fable” made sense to put right at the beginning, with Mary Heather Noble’s “Seduction,” on the process of how families sign over (or don’t) mineral rights, coming next. What these writers do in less than seven hundred words each is incredible! We progress from there: stories from the frontlines in New York, Oklahoma, New Mexico, Iowa, North Dakota, Colorado, Wyoming, California, Texas. The anthology ends with Alison Hawthorne Deming’s stunning poem, “Homeland Security,” which takes the reader to the orbits of space to contemplate what fracking on a cosmic scale might look like.

I have to say this work was a joy, if that is the right word. What I mean to say is that I felt like I was a part of a choir rather than a lone voice with a message. As a writer who cares about the planet, it’s easy to fall into grief or despair, and pulling together this anthology helped me know that I’m not alone. That’s partially due to some of my own favorite writers saying yes to this project—Alison Deming, Linda Hogan, Bill Roorbach, Bill McKibben, Barbara Hurd, Patricia Limerick, Rick Bass, Dick Manning, Kathleen Dean Moore. For some of our other writers, this will be their first time in print. That’s what I think the future of environmental writing can look like: making space for conversation between emerging and established environmental thinkers, which is where things get interesting.

As the anthology came together—as you began to read, consider, and order these pieces into a book manuscript—what sorts of feelings or insights did you arrive at that you hadn’t had before? Did any of them surprise you or move you?

I think I developed a new, deeper awareness about what writing that is a part of the world—rather than apart from the world—can do. We are entering a time when the ability of humans to live on the planet is at risk, and that brings us face to face with moral and ethical questions. I think of Linda Hogan’s poem in the anthology, “Greed,” or Derrick Jensen’s essay, “Insanity.” I often feel as if those of us already concerned about issues like fracking sound the alarm and no one listens. But people are listening. Just look at this anthology: fifty-one people are gathered here to bear witness in their own way to what fracking looks like, both now and in the future.

What kind of effect do you hope Fracture will have on its readers? Who is your ideal reader, and what kind of reading experience do you hope they’ll have? What sorts of questions, or ideas, do you hope to leave them with?

I really hope Fracture will get us to wake up to the reality of our dependence on oil. North Dakota alone has over 10,000 reported oil, chemical, and saltwater spills. The train derailment in Mount Carbon, West Virginia, last January set the river there ablaze. Pipelines are being slated to carry Bakken oil throughout the country. If I’m being honest, I hope the anthology will anger people—and then inspire them to take action.

The ideal readers for the book are grandparents, school teachers, plumbers, social workers, welders, farmers, grocery-store workers, chefs—by which I mean people who bring disparate perspectives and thinking to issues. This book isn’t intended only for environmentalists. It’s also full of really good literature, and I think that’s important to highlight. It is possible to write serious literature about serious environmental topics. So often we have the idea of the writer doing her or his own work, the state of the world be damned. But the writers I’m most interested in aren’t narcissists; they’re people like Kathleen Dean Moore and Carolyn Raffensperger, both of whom contributed to Fracture, who help us think about future generations. Ultimately, I hope the book will inspire others to share their stories, get active in their local communities, and, ideally, raise a little hell.