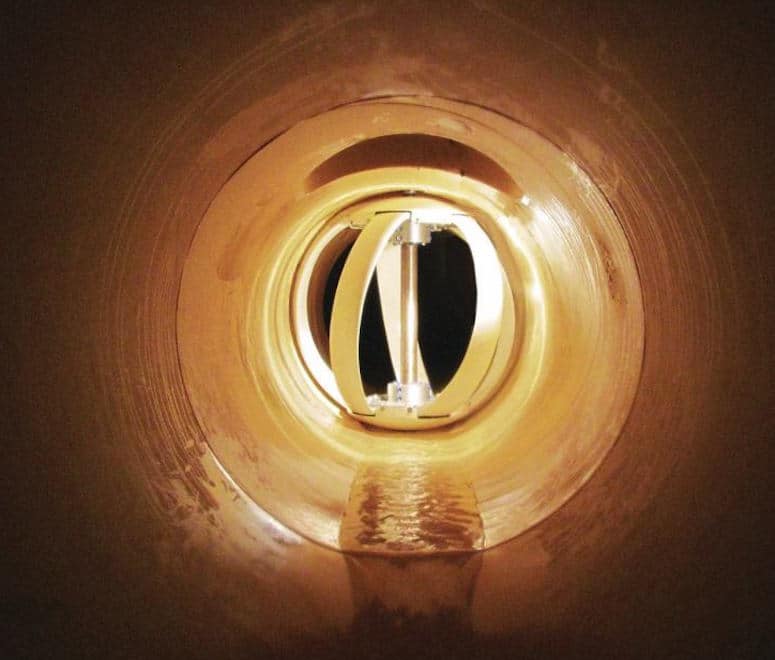 A view of the inside of a Lucid Energy pipe, with turbine visible.

The only truly clean energy I’ve ever heard of keeps the lights on in Portland, Oregon. A little energy company called Lucid Energy, melding technological innovation with forehead-slappingly obvious design, is generating power by putting turbines in municipal water pipes. Lucid Energy is showing the way to the future, but it has, at the same time, made me a liar.

You see, for years and years I’ve said, to my friends and my colleagues and my students: there’s no such thing as clean energy. While pretty much anything is better than fossil fuel, all our alternatives have their problems. Wind? Dead birds and virulent NIMBYism. Solar? Ask the Mojave Desert tortoise, and then try to dispose of the panels responsibly. Tidal? Let me know when it’s really real. Nuclear? Please. Hydro? Well, we’ll get to hydro. You might mention energy conservation, and conservation is great, but it is not, in itself, a way to produce energy.

Now, I am wholeheartedly in favor of many of these options—especially solar—but as we develop alternatives we also need to wrestle with their impacts. But the LucidPipe Power System doesn’t really have impacts.

Portland’s water starts in the Cascade Mountains, east of the city. It flows down from the hills and into the Bull Run River, spills through a series of reservoirs, gets channeled into pipes and through purification facilities and distribution centers, and then runs out the faucets of Portlandia. The whole thing, from rain to distribution center, is gravity fed; the Bull Run watershed starts almost five thousand feet above downtown Portland. The system provides Portland with (so it claims) “the best drinking water in the world.” Note: I used to live there and I can tell you that the water is indeed pretty good, just like everything else there is to eat or drink in that city.

The Bull Run system also provides a whole lot of head. Head, in terms of hydropower, is the vertical distance water drops before it passes through turbines: more height, more head, more power. This sort of power is exactly why people build hydro dams, but hydro brings landscape-scale ecological destruction. Dams block fish from swimming upstream, stop silt from traveling downstream, and flood the valley above them. As fish go downstream, they can get churned up by hydro turbines. But when you put the turbines inside pipes, all those problems go away—no fish, no silt, no nothing. Just running water and spinning turbines. 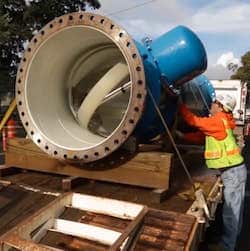 Workers in Portland, Oregon, prepare to install a Lucid Energy pipe below ground.

In 2009, Lucid Energy began, as twenty-first-century companies do, in a start-up incubator. In 2010, the company piloted its power pipes in Riverside, California, east of LA—the turbines there keep streetlights on. This is the coolest thing about Riverside. In 2015, Lucid Energy installed its turbines in Portland. Each of the four turbines produces fifty kilowatts, adequate power for about seventy-five homes. The turbines are controlled remotely; you can stop them if there’s a problem or velocities are too fast, though they work well within the bounds of normal flow rates. Right now, Portland’s pipes are on pace to produce 900 megawatt-hours per year, the sort of thing that could power a neighborhood. But this is only the beginning.

The potential market for Lucid’s clean, efficient power is enormous, because along with energy, nearly everyone needs new pipes. America’s municipal plumbing, like much of the rest of our Baby Boom Infrastructure, is in need of billions and billions of dollars of upgrades and maintenance. We lose two trillion gallons of drinking water a year because of leaky piping. So as cities replace old pipes (or as growing communities lay new ones) picking pipes that produce power seems like the obvious choice.

Now, Portland’s LucidPipe system was expensive—though Lucid notes that installation was especially tricky due to neighborhood location, and that lessons learned will reduce future costs by as much as half. Most cities do not have much public money to spare. If they did, America wouldn’t have a huge backlog of leaky pipeage. In Portland’s case, the money for Lucid’s system came from private investors, who will reap the profits from selling the power and share with the city. They expect to make $2 million over the next twenty years. This is similar to solar-panel leasing, where power companies rent your roof to put up panels. It seems like a reasonable way to transition to sustainable power, although it would be simpler if cities were able to buy the pipes and distribute the power themselves. As more and more states create Renewable Portfolio Standards—the requirement that a certain portion of each utility’s energy come from renewable sources—the demand for pipe turbines will grow as well.

This scheme should be useful literally everywhere that relies on gravity-fed municipal water systems. San Francisco, New York, Denver—any number of other cities around the country and world. San Antonio, Texas, and Johannesburg, South Africa, are in talks with Lucid right now. And beyond this current technology, the company is working on smaller turbines that might work in the pipes closer to your house. The best thing is, this source of energy will never stop as long as people use tap water. As long as snow falls on the mountains and melts into rivers that run down to the city, the turbines will spin.