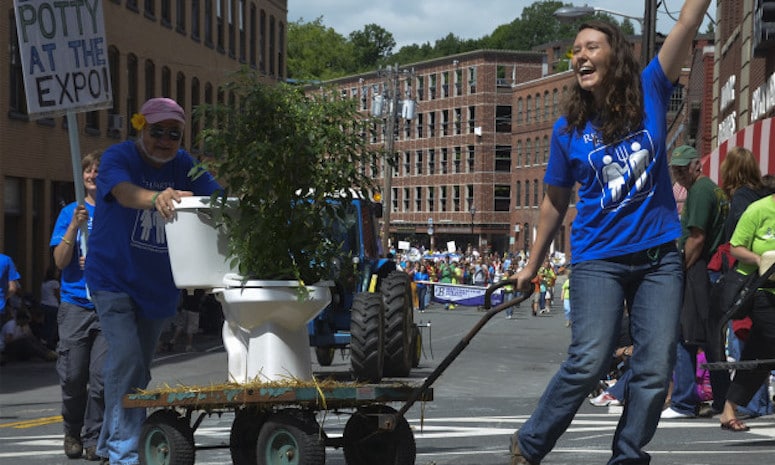 Like any nonprofit, the Rich Earth Institute solicits donations. But while the organization appreciates tax-deductible contributions, it also wants your liquid gold: urine. If you live in southern Vermont, the Institute can use your help to make the fields around Brattleboro verdant and productive.

People urinate (or ought to) about five times a day, producing a total of about one liter of fluid. In case you’re wondering, pee is yellow because of the pigment urobilin, which is produced as old blood cells break down in your liver. When we pee, nutrients escape our bodies and become waste. In a year, according to the Rich Earth website, a person pees out eight pounds of nitrogen and one pound of phosphorus. These nutrients are the very things that we manufacture artificially into fertilizer and spread on our fields, at great financial and environmental cost; excess nutrient pollution from fertilizer is one of the biggest challenges facing American waterways today, resulting in algal blooms and oxygen-starved rivers all over the country.

In 2012, the founders of the Rich Earth Institute looked at this situation, looked at the farms around Brattleboro, and put two and two together: instead of buying artificial nutrients, why not use the ones our bodies secrete every day? And why not, at the same time, keep some bodily waste out of treatment plants? The Institute calls it “closing the food-nutrient cycle.” After only three years, two hundred contributors have provided forty-five-hundred gallons of urine. Their nutrients have helped make hay at Whetstone Valley and Fairwinds Farms, two operations in Brattleboro.

It’s important to note that Rich Earth has worked with Vermont’s regulators since day one to ensure that its work is legally certified. The state recently permitted the organization to use a mobile pasteurizer, probably the first such system in America, so that the nutrients move easily from farm to farm. Word is spreading about the project all over the region as the Institute works with local and state lawmakers. While everyone at the Institute is serious about the mission, they’re not above a little toilet humor. Volunteers wear t-shirts featuring an airport-style male/female toilet symbol, but instead of a divider, there is a pitchfork.

Some readers might be wondering… Isn’t pee unsanitary? Well, not exactly. Urine is sterile. The diseases associated with human waste come from feces (which has much lower nutrient levels than urine). Of course, there is always the possibility of cross-contamination when collecting pee, so, to be sure, the Rich Earth Institute pasteurizes its liquid using solar power as well as the natural cleansing action of urine’s ammonia. If you let urine sit for six months, it will clean itself. The Institute also uses urine-diverting toilets; this is the best way to handle the problem, but not many houses have them (yet).

A tougher issue is artificial pollutants—pharmaceutical waste, for example—which are also in your pee, and which also flow into our waterways, as wastewater treatment plants typically aren’t built to handle them. With the help of scholars from the University of Michigan and the University of Buffalo, Rich Earth is attacking this problem. Research is ongoing, but it seems that artificial pollutants degrade better after being applied to active soil than after being dumped in water, another advantage of using pee for fertilizer. Until the studies finish, Rich Earth is doing the conservative thing and only fertilizing hay instead of food crops—and there’s enough hay acreage in the Northeast to keep them busy for years.

Now, urine is a funny topic—I came up with more potential titles for this entry of Concrete Progress than for any other—and you might be squeamish about it, but I think the case of the Rich Earth Institute shows how creative people can be when they’re confronted with a problem. Almost all water pollution fixes take place at the end of the pipe—cleanup or purification of already-polluted water. But Rich Earth solves the issue of excess nutrients before they get into the system. As a result, less waste flows into municipal wastewater plants, less artificial fertilizer gets dumped on fields, less nitrogen runs into rivers. Win, win, win.

Some of the things I write about in this column are pretty site specific—you can’t have a deepwater cooling system without some deep water. But Rich Earth’s model is the most replicable innovation I’ve ever seen. In the long term, I don’t see why it couldn’t scale up to meet the needs of a city. As people strive to reduce waste and conscientiously use natural resources, more of us may be diverting our pee in the future.