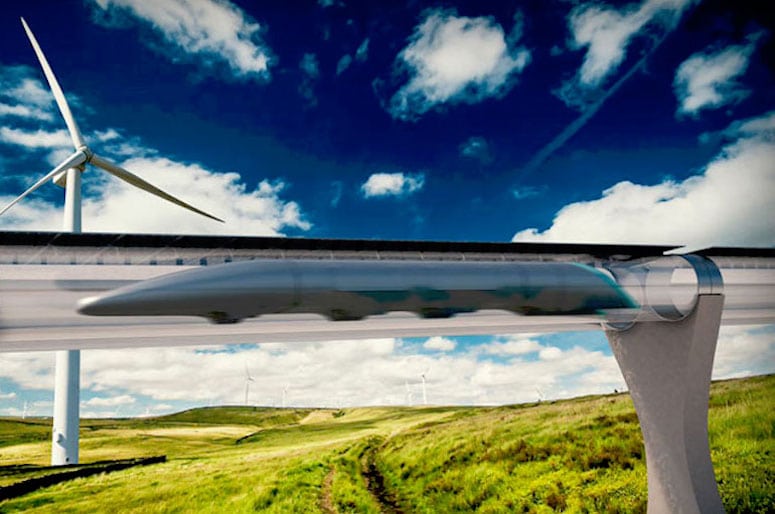 A rendering of the Hyperloop’s passenger pod and elevated track. Courtesy of Hyperloop Transportation Technologies.

When I lived in Santa Cruz, California, sometimes I’d drive to Los Angeles. It took a solid six hours. With something called the Hyperloop, I could have done it in thirty-five minutes.

I’ve been excited to share the Hyperloop with you since I started writing this column. It is, in my estimation, nothing less than the most innovative, futuristic subject in all of infrastructure. The Hyperloop will be the fifth mode of transport, after planes, trains, cars, and boats. It will be the biggest leap in transportation since the Wright Brothers. It will truly change the world. If it works.

Here is the basic idea: Think of a pair of metal tubes, about seven feet across, with the air pumped out to create near-vacuum conditions. The expected pressure in the tubes is 0.015 pounds per square inch (psi); ordinary air pressure at sea level is 14.7 psi. A pod full of people will start down a tube (one tube will take people north, the other south) and, with minimal air resistance, zip along at speeds above 750 miles per hour. The pod will ride on a cushion of air, much like a puck on an air-hockey table. The front of the pod will have a large fan that sucks in air, pushing some of it out the back, circulating some inside the pod, and using some of it to help the pod levitate. This will cut air resistance to hardly anything, so travel will demand very little energy once things start moving. (The system’s most important energetic demand will be pumping air out of the tube to maintain low pressure.) The tubes will stand on pylons, so land uses beneath and around the route won’t have to change. Solar panels on top of the tubes will produce all the energy the system needs. The pair of tubes would follow existing highways, for minimal disruption and maximum efficiency—if they have to turn a lot, the pods will only do about three hundred miles per hour, so sites along straight roadways are probably best for them.

The idea of the Hyperloop belongs to busy futurist Elon Musk, who is clearly a benevolent visitor from some more advanced planet, and who has already given us PayPal, Tesla, and SpaceX. Musk saw the plans for California’s long-debated high-speed train system and found them pitiful. In 2013, he and some colleagues put together a white paper laying out their vision for the Hyperloop. Musk estimates that the Hyperloop plan would cost a small fraction of the proposed train’s price tag and be much, much faster and more efficient. The only mode of transportation as remotely energy efficient would be—as Musk self-servingly but accurately notes—a Tesla Model S. Which would still take six hours to get from San Francisco to LA.

Now, I am not an engineer. The Hyperloop may fail due to technological problems that I cannot diagnose. But, while there are some concerns (heat in the tube, for instance), I have found no convincing argument for why the technology won’t work. The task now is to build it, and that effort is very much underway.

For several reasons, the SF–LA route is the focus of Musk’s white paper: the bullet train proposal, the fact that Musk lives in California, the ready-made customer base—six million people drive between the two cities every year. But the most compelling reason, to me, is that driving from San Francisco to Los Angeles is slow-cooked despair. At either end of the journey there is vile, crazy-making traffic, and in between you roll down a section of I-5 that contains mono-cultured farms and lung-scouring smog, with only the occasional rural slum and anti-environmental billboard to break the monotony. It always seems unbelievable that two of the world’s most dynamic cities, in one of the country’s most beautiful states, are connected through such desolation, but that is, in fact, the case.

But if the Hyperloop is not yet real, why write about it? Well, last year was a big year for the Hyperloop’s transition from an alien idea to a physical reality. A group called Hyperloop Transportation Technologies (HTT), is forging ahead and preparing to build a test track in Quay Valley, California. Its engineers do this work more or less in their spare time in exchange for future stock and glory. This past summer HTT announced a partnership with some of the most prestigious engineering firms in the world. SpaceX is running a pod-designing competition, which, if all goes to plan, will send pods zipping through a tube sometime next year. It’s important to note here that while Elon Musk got the ball rolling (or the pod going), he’s not actually involved in building the Hyperloop—he just wants to encourage it. HTT is building components of the eventual loop and pods. This is happening.

Fast forward five years. The test track works, the pod works, and the first functioning Hyperloop gets built—say, LA to San Diego in fifteen minutes. Once the line is established and people are whizzing back and forth day after day, surely every other part of the country will want one. It will change everything about the way Americans travel. You could work in Minneapolis and live in Chicago. You could live in Portland and have season tickets to Seattle Mariners’ games. You could live in Toronto and date someone from Montreal. Suddenly, we would live not so much in cities or counties as in regions. There would be far fewer cars on our highways and far less carbon in the atmosphere. The Hyperloop will allow more and more people to live where they want instead of moving reluctantly for work. It will keep families and friends connected throughout their lives.

Assuming that the technology works and tickets are not too expensive (Musk estimates twenty dollars), I think the only problem would be public acceptance. This is truly a new thing under the sun; people will not quite know what to think about it. It will change the psychology of distance, much as trains did. Once upon a time, horses and sailing ships were just as strange and revolutionary. I hope the Hyperloop works.