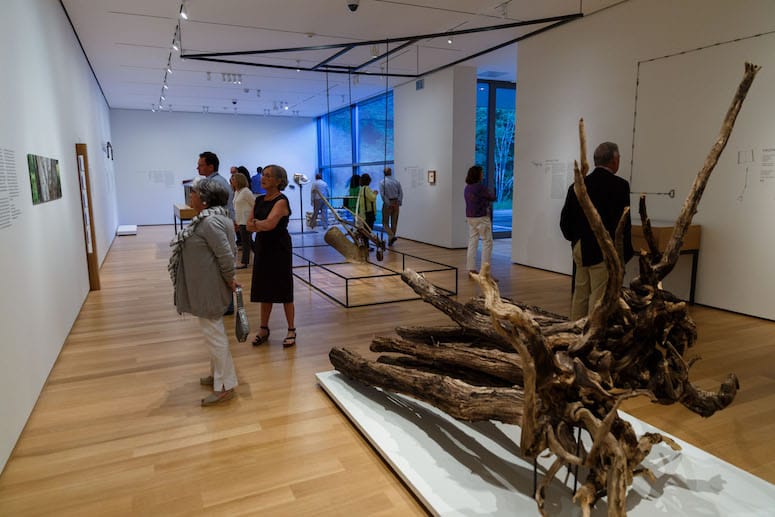 The Clark Art Institute, in Williamstown, Massachusetts, is a longtime neighbor and friend to Orion, for reasons of both location—it’s a short (and beautiful) drive north of our office in the Berkshires—and mission. For over fifty years, the Clark has been a home for visual art that explores the connections between nature, culture, and place. A new exhibition, open through October 10, investigates a landscape in flux.

A landscape is more an event than a thing, a confluence of life cycles, organic and inorganic, that overlap in time. Seasons change; living things emerge, reproduce, and die; natural and human actions reshape the topography. In an instant, what was is no longer.

As globalism and virtual technology redefine our once-fixed sense of physical and cultural order, an exhibition at the Clark asks us to consider the meaning of place and our relationship to it. “Sensing Place” takes as its focus an aggregate of pasture and woodlands called Stone Hill that rises just over 1,000 feet at the south end of the Clark campus. Both a scenic view from the museum and a point of view over the surrounding Taconic and Green mountain ranges, it is an upland nature refuge traversed by well-used hiking trails that touch upon the residential neighborhoods surrounding it.

What Stone Hill appears to be today, however, is only the present moment in a 500-million-year period of flux that is still in play. As the exhibition illustrates in maps, objects, time-lapse photos, and videos, this pastoral landscape is an arena of relentless competition among living things for space and sustenance. It is shaped by endless geological shifts and changes in climate.

Organized by Mark C. Taylor, professor of religion at Columbia University, and Henry W. Art, professor of biology and environmental studies at nearby Williams College—both of whom live on Stone Hill’s slopes—the exhibition could have simply been a display of archaeological artifacts. And to some casual viewers it will be. But it is the reflections in wall texts or audio-guide narratives by historians, naturalists, scientists, artists, and philosophers, many associated with Williams, that bring it to life with penetrating, often artful insights:

Meanwhile, Pulitzer-Prize winning writer Elizabeth Kolbert exhibits monolithic soil borings from diverse localities on Stone Hill and ponders the impact global warming may have years hence, as curator Henry Art, the biologist, envisions communities of wildflowers taking turns at life in the annual cycle of seasons. And his curatorial colleague Mark Taylor ponders a cow skull and how bones become records of our lives before vanishing to nothingness.

Whether this tapestry of processes is guided by a supreme intelligence or is mindlessly self-sustaining—and whether globalism and virtual realty are upward trends or downward spirals—are left to the viewer to decide. For Taylor, who once made a study of the final resting places of famous people and has already planned his own (near Stone Hill), the answer is: “What has no place is not.”

Charles Bonenti is a freelance art and architecture critic based in Williamstown, Massachusetts.