To celebrate the recent launch of an important and relevant new book, The Archipelago of Hope, I reached out to its author, Gleb Raygorodetsky, to learn more. 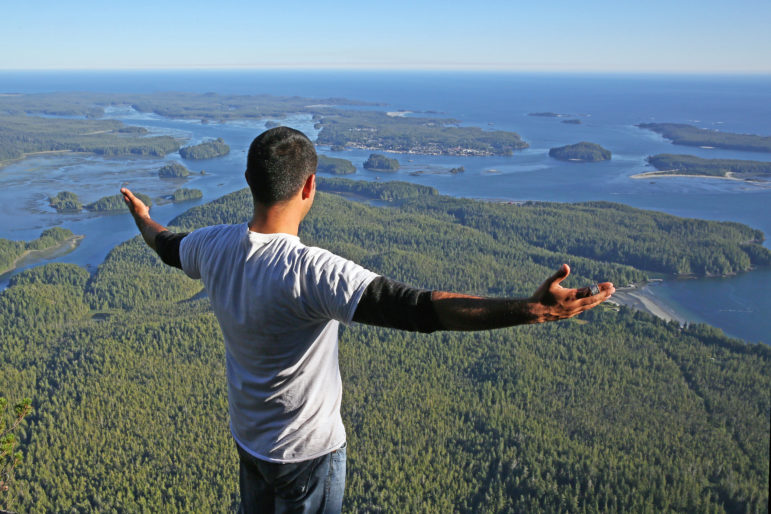 Born and raised in a small village on the Bering Sea coast of Kamchatka Peninsula, USSR, Gleb immigrated to the United States in 1988. He made his way from New York City to Fairbanks, Alaska, where he continued his studies in wildlife biology. Since then, Gleb has traversed the Americas, from Canada’s Beaufort Sea to the Brazilian Amazon, from the Andes to the shores of Lake Superior, living with Indigenous peoples as diverse as Aleut fur seal hunters, Amazonian Caboclos pirarucu fishermen, and the Gwich’in caribou hunters. 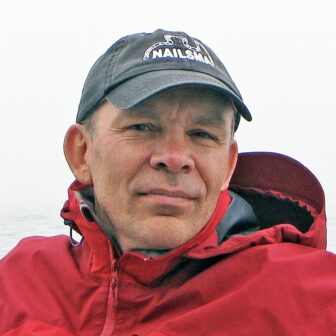 After earning his PhD in ecology, evolution and environmental biology, he continued working with Indigenous groups around the world. Gleb has written and contributed to books and scientific articles on Indigenous issues, traditional knowledge, and conservation in both English and Russian. He wrote Gwich’in Words about the Land—a book on the Indigenous ecological knowledge of Gwich’in people in the Northwest Territories. He has also written popular articles on Indigenous and environmental issues for various magazines. Gleb is a co-founder of Conversations with the Earth (CWE)—an Indigenous-led multimedia initiative that amplifies Indigenous voices in the discourse on climate change.

1) Your recent book is called The Archipelago of Hope. Can you give us a synopsis on what the book is about and how the word “archipelago” made it into the title?

The Indigenous communities and their traditional territories are the islands of biocultural diversity in the ever-rising sea of development and urbanization. The Archipelago of Hope takes readers on a journey to explore the inextricable links between Indigenous cultures and their lands, and how they form the foundation for climate change resilience around the world.

Indigenous peoples have a millennia-long track record of maintaining intimate relationships with the natural world, which has nourished their communities and sustained their cultures. This is the track record that they have maintained despite formidable odds, including multiple “izations”—colonization, Christianization, sedentarization, and globalization.

What makes Indigenous communities indispensible in the search for climate change solutions is that their ancestral territories are the “living laboratories,” where the traditional practices and understanding of nature meet modern technology and scientific insights, generating new knowledge critical for developing relevant climate change responses.

2) You are an expert in the field of “biocultural diversity” conservation. Can you define this field and tell us how you entered into this sort of work?

In recent years, a number of integrative disciplines—systems science, resilience science, ecosystem health, ethnoecology, deep ecology, Gaia Theory, and others—have sought ways to advance our understanding of the relationships between people and nature, incorporating insights from both the biological and social sciences as well as Indigenous knowledge.

Various organizations working on biodiversity conservation, cultural preservation, and sustainable development are increasingly relying on such holistic approaches in their work. Out of all these approaches, biocultural diversity has particularly resonated with me. Biocultural diversity is a product of millennia of coevolutionary relationships between humans and their surroundings, when people rely on their environment for survival while adapting to and modifying it. 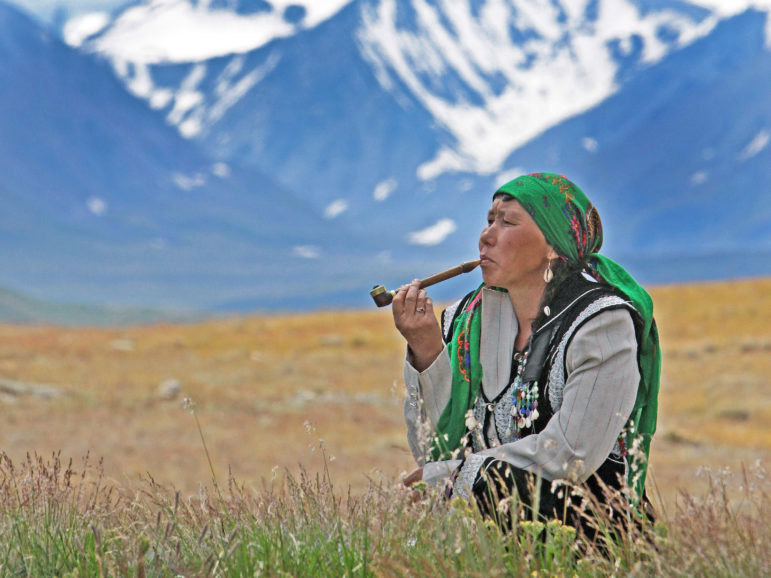 (Photo: On sacred Ukok Plateau, Maria Amanchina, a traditional Altai shaman and healer, lights a pipe to send her prayers with the smoke to the Sky, the Land, and the Spirit of Altai.)

3) Can you explain Traditional Ecological Knowledge (TEK), and how it’s being used (or not) when making important climate and environmental policy today?

TEK is the cumulative body of knowledge, practices, and beliefs about the relationships between people, other living beings, and their environment, handed down through generations through oral and hands-on transmission. It provides valid and practical information about various ecological processes including, for example, daily movements of animals, their seasonal distribution, and multi-year changes in abundance. TEK-based monitoring allows for timely detection of environmental changes, and development of appropriate community responses that help maintain the integrity of local social-ecological systems.

Until recently, TEK has been largely ignored, but increasingly it has been recognized for its important contributions to such fields as wildlife conservation, land use planning, environmental monitoring, and human wellbeing. New emerging frameworks, such as Multiple Evidence Based approach, creates a platform for an equitable knowledge co-production. By focusing on the complementarity of diverse knowledge systems based on both Indigenous and scientific knowledge systems, this leads to better decision-making on multiple scales. 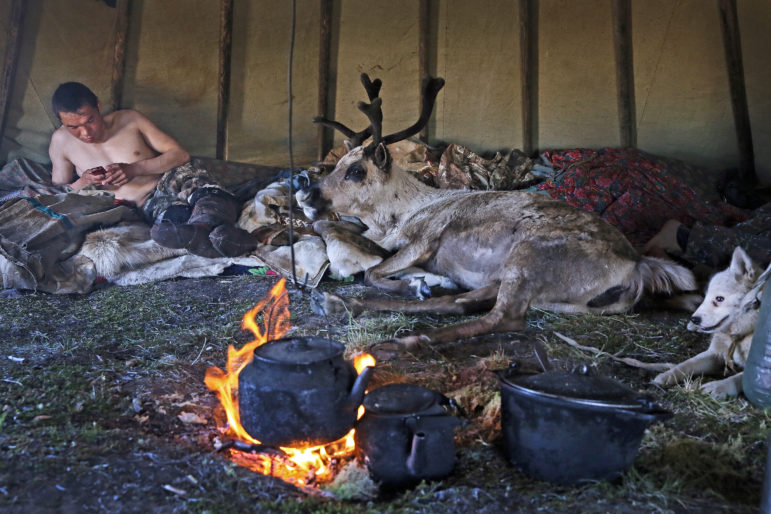 (Photo: Inside a Nenets herders’ traditional chum, Gosha Khudi is taking a break from his daily chores and checks text messages on his cell phone. A young reindeer doe, a survivor of the 2013–2014 “rain-on-snow” extreme weather event, hides from mosquitos inside the tent.)

4) What are some takeaway lessons you learned while immersed in Indigenous communities to discuss such global challenges as climate change?

All of the Indigenous peoples featured in the book are intimately aware of the web of relationships that sustains them and their traditional territories. The interdependence of animate and inanimate, spiritual and physical, past and future, rights and responsibilities, traditional knowledge and science, are fundamentally important for sustaining our planet’s biocultural diversity.

Despite everything the modern world has thrown at them, the Indigenous peoples I profiled have found ways to persevere and even thrive, by keeping their links to the land and other living beings. What makes these Indigenous communities resilient is that their stewardship of the land is based on Respect, Reciprocity, and Reverence (3Rs) to each other, their neighbors, and the Earth.

Traditional territories of Indigenous peoples continue to support the majority of the earth’s remaining biological and cultural diversity, intact forests, undammed rivers, and ecosystem services, which are fundamental for regulating the climate. Recognizing Indigenous peoples’ inherent rights to fulfill the responsibilities of looking after their traditional territories—the obligations they inherited from their ancestors—is a prerequisite for sustaining the resilience of these places. 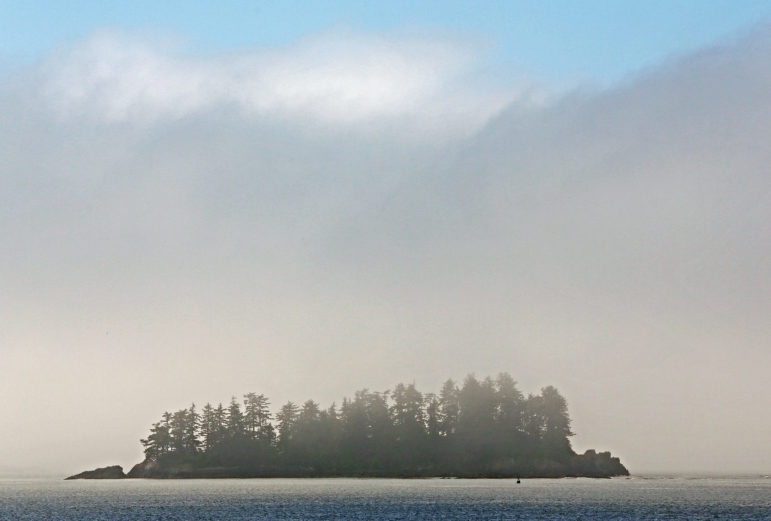 (Photo: The Islands of Clayoquot Sound (British Columbia, Canada) are reluctant to get out from under the cover of morning fog. But later in the day, the summer sun often burns through the mist, and the light throws land- and seascape into sharp, vibrant relief.)

My hope is that The Archipelago of Hope becomes more than just words on paper, that it turns into flagstones on a road to healing, reconciliation, and positive transformation. I am working with my long-term partners to create “The Archipelago of Hope” outreach program and a community-focused traveling exhibition program that would enable Indigenous community members to share their own stories with one another, their neighbors, decision-makers, and the broader global community.

We are also establishing “The Archipelago of Hope Indigenous Resilience Fund,” so that any profits earned from the book sales, as well as any donations to the projects profiled in the book, can go directly to the relevant communities, their representative organizations, or their partners. So that eventually, in the words of my friend and teacher Tero Mustonen, the “complete rebirth on the land” becomes a real option for all communities facing climate change.

Find more information on The Archipelago of Hope:
Visit the Official Website.
Explore Facebook, and Twitter.
Listen to WNYC Studios feature.
Read an excerpt from the book at Cultural Survival.