Drew Lanham’s article, “Forever Gone,” found in the Spring 2018 issue of Orion, is illustrated with images of Carolina parakeets that Orion’s editors found on Instagram. Here is a behind-the-scenes look at those twelve images, in the words of the artists themselves.

I am a woodcut artist and I often portray extinct or invasive species (the two extremes). To make art about animals that once lived alongside us is a way to pay homage to our past and a warning for the future. This piece is titled “Carolina Parakeet 1918,” because the last bird died in the Cincinnati Zoo that year. Jenny’s Instagram

My drawing was part of an art book project I did focused around extinct parrots. Whenever I create art to indulge myself, my interest tends towards a celebration of birds combined with a hint of the educational. As a lifelong bird lover with an interest in history, I’ve always felt an affinity for the Carolina Parakeet, always been captivated by the tragedy of its extinction. Over the years, selling prints of my work, I’ve met a number of others who share this with me. We want to keep the memory of this bird alive even though none of us were alive in its time—as a reminder of what we’ve lost, and of what more we could lose. Emily’s Instagram

I’m a Maine native naturalist and avid birdwatcher. In 2014, I painted a series of portraits of all the recently extinct bird species in North America for an exhibit at Maine Audubon. This painting is the watercolor sketch I did for the Carolina parakeet portrait. Jada’s Instagram

As someone who shares her life and home with two parrots (an African gray and a yellow-sided conure), I am constantly amazed by the things they do and the way they interact with my family and clients. Though I love reading about and seeing the naturalized flocks in California and Brooklyn, I am heartbroken to know that we used to have a native parrot in this country, and that humans are responsible for its extinction. I think the Carolina parakeet has a message for us—both for the necessity to protect other species as well as a message for us to look at our priorities. Who else might we be forcing out to protect our short-sighted goals? How can we make space for each other to thrive and flourish? As an art therapist, I often use drawing, painting, or other art responses to process the world around me. This image is a message to remind people that we had a parrot here, we did not protect it, and we no longer get to see it in our world today. Erin’s Instagram

I was imagining the context of Nat Turner’s life in Virginia and thinking about the credibility of his “confession,” which was allegedly given to an attorney by the name of Thomas Ruffin Gray. After falling into gambling debt, Gray went on to publish The Confessions of Nat Turner (Gray was not Nat Turner’s attorney) and there is much reasonable speculation that the book is largely a fabrication. When I made this painting, I had just read that book and was thinking about the business of making myths and the power those myths end up wielding in our lives. What is gained or lost in the process of making a human emblematic? Turner spent his entire life in Southampton County, Virginia, which was a plantation region (with corn crops that likely would have been harried by the Carolina parakeet). Opposing popular views of Nat Turner as either a delusional zealot or as a barbarous agent of resistance, I fabricated a more ambiguous and quotidian scene, so he’s there in a private moment with a Carolina parakeet he may well have kept as a pet. Cy’s Instagram

Cy Gavin’s work is currently on view at the Whitney Museum of American Art in “Between The Waters” and at MASSMoCA in its exhibition, “Lure of The Dark.”

Every piece of Rockcrest Glass Studio stained glass is an original; inspired by wildlife and natural phenomena, then designed and handmade by me. I work in the copper foil method pioneered by Louis Comfort Tiffany in the late 19th century, with each piece of glass being carefully selected for its specific color and textural qualities. The glass is hand cut and then ground to shape and remove sharp edges; then copper foil is wrapped and burnished by hand around each piece. All pieces are assembled and soldered together to create the final panel or sun catcher.

The Deadly Sins of the Carolina Parakeet is a two-panel stained glass piece specifically created for and exhibited at the Peale Center’s (Baltimore, MD) “Birdland and the Anthropocene” gallery show, curated and presented by Lynne Parks in October 2017. Both panels are available for purchase.

I am a paper-cutting artist living in New York’s Hudson Valley. I cut the Carolina parakeet for my book Brave Birds (Abrams, 2018). The parakeet was one of three extinct birds that I included in the book, alongside the ivory-billed woodpecker and the laughing owl. While cutting the Carolina parakeet, I read that one of the reasons for the bird’s extinction was the use of the colorful feathers in decoration and clothing. This made me think about our urge to possess things that are beautiful, and how difficult it can be for us to understand that beauty sometimes can’t be possessed. It’s such a hard lesson to learn—and we have to relearn it again and again. Maude’s Instagram 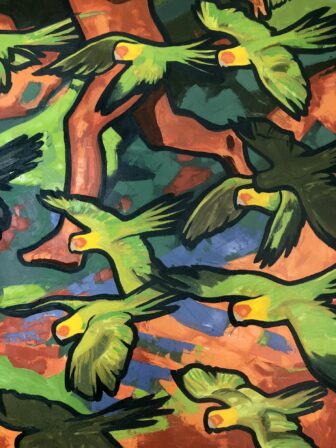 “Chickasaw kid running alongside a flock of Carolina parakeets” is a depiction of a long-gone world. The extinct birds shown in this painting, which is currently in progress, are used as a metaphor for a Golden Age that once was, a time when life was simpler and mankind lived in balance with nature. Iker’s Instagram

Note: Iker’s image found in the print edition of Orion is a detail of a larger painting that was in progress at time he posted it on Instagram; the full-size (and nearly complete) painting is shown here.

My painting representing the Carolina parakeet is part of a body of work entitled “Birds of Paradise.” The work questions the symbolism of conventional oil portraiture through a lens of eco-feminism by depicting traditionally oppressed figures of women with dignity and grace. Each painting features a bird as a symbolic element, representing the individual uniqueness of how women experience oppression in varying configurations and degrees of intensity while sharing a common struggle. Using the Carolina parakeet in this work was a means to bring them back to life, in a place where miraculously they returned from extinction to survive and thrive once again. Sarah’s Instagram

John James Audubon’s famous painting of Carolina parakeets has been a labor of love for me, as Audubon is one of my favorite naturalist illustrators. Although clearly modified to be tattooed as a sleeve with some changes to the branches and leaves, I have tried to keep the vibrant colors as close to the painting as possible.

My good friend Kate Hockstein is the wearer of this tattoo. As a native of Virginia, she decided on the parakeets as a dedication to her home state, and to the fleeting beauty of nature that we often overlook until it is gone. I cannot imagine a more perfect tribute, and I have worked my best to honor it as a tattoo artist. Dan’s Instagram

On a polished glass shelf in the Redpath Museum in Montreal: a small green bird. I noticed the Carolina parakeet at first because it seemed so visually similar to an image I had painted from a rescue-bird twitter account. The label tells us: “DISPARU/EXTINCT,” that the animal was donated before the species’ extinction in 1914, and that this specimen is over one hundred years old. For Remembrance of Lost Species Day we opened its cabinet. And I held the small stuffed body in my hand. It was heavy as the world, the lines of fading feathers tracing a map of partings without end. The painting, I suppose, is a rickety memorial lost in the thicket and din of the sixth extinction. But it provided me a moment to take breath as we step deeper into the Anthropocene. Katrine’s Instagram

There’s a certain presence that goes along with the parrot-kind. In their eyes and being there’s a knowing we can’t ever fully know. Even in stretched-out, taxidermied death, this Carolina parakeet on display at the Georgia Museum of Natural History a few years ago seemed poised to reanimate itself and give me a lecture on forever gone. And I was enraptured—fully prepared to listen. Drew’s Instagram