With the partial federal government shutdown reaching into its second month, we contacted journalist and photographer Krista Schlyer to learn more about the ecological realities along the US-Mexico border. In the current issue of Orion, Schlyer’s photo essay “Sacrificial Land” captures much of what’s at stake along the borderlands—the animate beauty, biodiversity, and shared habitat.

Krista Schlyer is a conservation photographer and writer living in the Washington D.C. area. Her work has been published by the BBC, Orion, The Nature Conservancy, High Country News, Newsweek and others. She is the author of three books: Continental Divide: Wildlife, People and the Border Wall, winner of the National Outdoor Book Award and Ansel Adams Award for Conservation Photography, Almost Anywhere, and her latest book, River of Redemption: Almanac of Life on the Anacostia, released in November 2018. Krista is currently working on a documentary film called Ay Mariposa, which tells a story of butterflies and resistance in the US-Mexico borderlands.

NT: How you were you first drawn into border policy and its intersection with wildlife?

KS:  I worked for Defenders of Wildlife in 2004. At the time, anti-immigrant forces were pushing for a US-Mexico border wall and escalating militarization, and Defenders was advocating for wildlife and ecosystems impacted by such policies.

I started working as a freelancer shortly after that, and was reporting on a herd of bison living on the border of Chihuahua, Mexico and New Mexico. I was in a small Cessna plane about five hundred feet above the Chihuahuan grasslands, searching for this bison herd with a scientist from Mexico City, Rurik List. We spotted a few members of the herd just as they were leaping over the border barrier at the time, a broken down barbed wire fence.

Later, Rurik and I went to visit the landowners on both sides of the border. In Mexico, the rancher said the bison came to his land almost every day to drink from a pond, one of the only year-round water resources in the area. On the U.S. side, the rancher said the bison came almost every day to eat in a particular pasture, where a nutritious species of grass grew. The herd’s food and water were split by the border. 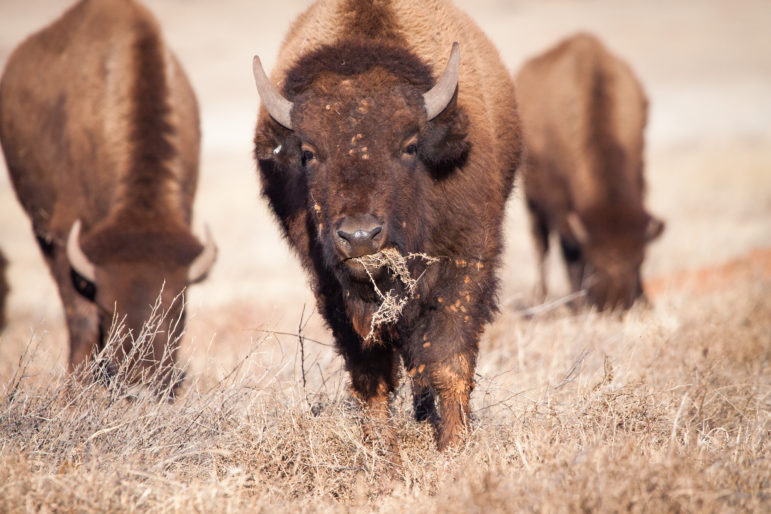 This was in 2008, shortly after the Secure Fence Act was passed, and the US government was planning to build seven hundred miles of enhanced border barrier. I was struck deeply by the enormity of this moment for wildlife and ecosystems, how thousands of species along this two-thousand-mile border were going to be facing a major (and deadly) transformation of their homeland. My world and work changed in an instant.

NT: What species are most critically affected by a US-Mexico border wall expansion?

KS: It is a long, long list. Environmental groups have stated that about one hundred threatened and endangered species are impacted by border wall. I would say the list of species that will be critically impacted is much longer. There are direct impacts to endangered species that rely on migration corridors like jaguars, ocelots, jaguarundis—three tropical cat species that can be found nowhere else in the United States. They have all been hunted to near extinction and have lost too much habitat, but they are hanging on to existence here, and that existence is tied to migration pathways to healthier populations in Mexico.

Similar threats are posed to Mexican gray wolves, bighorn sheep, Sonoran pronghorn, and others. But there is also a grave threat of direct habitat destruction and fragmentation. In the Lower Rio Grande Valley, less than five percent of the native habitat remains. The entire ecosystem along the Rio Grande is critically endangered, existing only in fragmented remnants. This remnant ecosystem is essential habitat for a mind-blowing diversity of species. Two of North America’s major avian flyways funnel through this region at the overlap of the temperate and tropical world. More than five hundred species of birds rely on this landscape, as do more than three hundred species of butterflies, imperiled reptiles like the Texas tortoise, and Texas indigo snake. 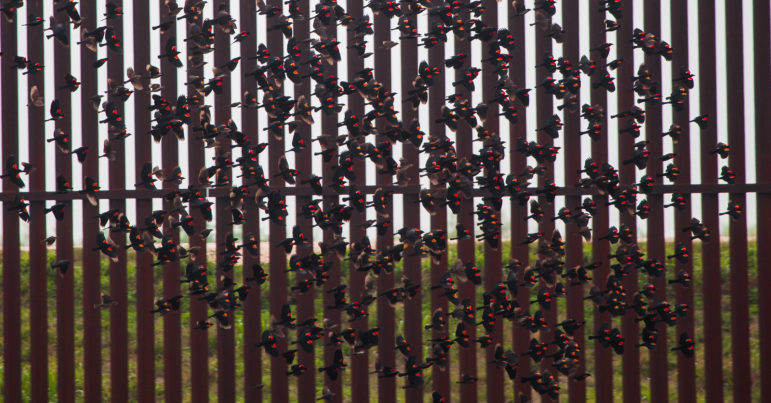 NT: Have you ever felt endangered while on assignment along the border? What are some of the main environmental challenges to your work?

KS: My fears working on the border have been few; I have always felt safe there. I have been afraid at times of the Border Patrol, because they have a long record of abuses and can be very threatening. But many in Border Patrol are kind and helpful as well. I have had encounters with human migrants, but they posed no threat. They needed my help and I was glad to be there to give it to them. As for wildlife, I’ve had encounters with bears, cats, coyotes, and venomous snakes, but I’ve studied how best to respond and afford them the distance and respect they deserve.

Only once have I ever felt afraid. I was hiking by myself in a remote place and came upon a cave formation in some rock. It smelled strongly of cat musk, what I took to be a cougar but couldn’t be sure because I never saw the animal. The hair on my arms stood up and I felt it was best to move on. I doubt I was ever in any danger, but I trusted my animal instincts. We evolved with predators like big cats. I assume that somewhere in my DNA is a prey instinct, and that’s an instinct worth listening to. 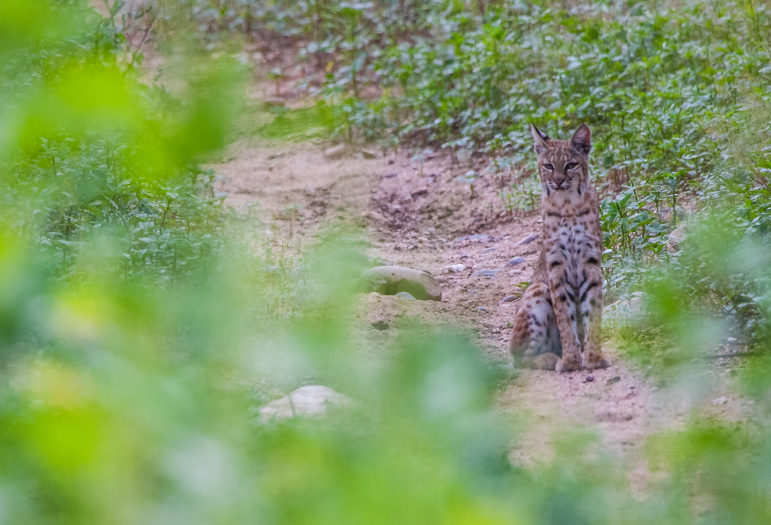 NT: Are mainstream debates on the physical barrier construction deflecting us from the more invisible walls of bureaucracy and policy already being erected behind the scenes?

KS: Absolutely. Our immigration system is broken. Has been for decades. Rather than try to fix it, politicians take the expeditious route and point to the border. They say: “look, over there, let’s do something about that,” when really there is nothing wrong with the border that couldn’t be alleviated with a realistic immigration system and more thoughtful trade policies with our international neighbors.

NT: What other specific examples around the world have borderlands impacted wildlife?

KS: In 2015 the Washington Post ran a story on border wall construction worldwide. By their count some sixty-eight walls were being built that year, more than any other time in human history. Each of these barriers will impact wild species and ecosystems, along with the people who desperately need to migrate.

In an era of changing climates, when migration is an essential survival and adaptation strategy, this will be devastating to countless species. Barriers can be long-lasting, even after the walls come down. There is a species of red deer in Europe, for example, whose migration patterns are still affected by the Iron Curtain, which came down almost three decades ago.

NT: Passage. Freedom of movement. Migration. These should be basic rights. What does a wall, at its core, symbolize to you?

KS: Fear. A need to control what we don’t understand, what we’re afraid to confront with an open mind and heart. Hubris. A cage we impose on ourselves because we don’t have courage to see that this world doesn’t belong to us. We are only creatures living within it, no more or less important than any other.

NT: You’ve been doing this work for over ten years. What keeps you coming back?

KS: Love. Responsibility. Connection. I have photos of so many faces from the borderlands. I look at them periodically—jackrabbits, foxes, butterflies, people. They are all a part of my life. The vulnerability they face at the hands of the U.S. government is my vulnerability, too. Their lives and futures are on the line, and I feel a desperate need to help them.

KS: I would like to say that we will realize what we are doing and change course. In the end, I hold out hope that this will happen. But I’ve seen too much about the way politics works, the way our power structures in Washington D.C. work, and the way our national news media works. I think it will be a long time before we truly change the course we are on.

If every person who cared about wildlife and the natural world picked up the phone and called their members of Congress every day saying no more walls and militarization of the border, we could turn this ship around in an instant. Barring that, it will take decades, and we may have walled off the entire border by then. So then it becomes a project of tearing that wall down. Whatever happens, I’m not giving up, even if I’m chipping at it with a pickaxe when I’m ninety years old.

NT: What is the most important takeaway for concerned readers from all your work?

KS: Consider the lives of those who do not have a voice in our society but depend on the land. This is not only true in the borderlands, but everywhere. I recently published a book called River of Redemption: Almanac of Life on the Anacostia. It’s about a river in the heart of Washington D.C., but fundamentally it’s about seeing all those who live in what Aldo Leopold called the “land community,” and honoring their need for home and habitat.

All my work is geared toward growing an awareness that we are not alone on the land, that everything we do to alter the world has ripples of implications—which can be negative or positive—on a vast community of other creatures.

New to Orion? First-time subscribers get an on-sale rate: One year (4 issues) for only $29.