Camille Seaman was born in 1969 to a Native American (Shinnecock tribe) father and African American mother. Her photographs have been published in National Geographic, Italian Geo, German Geo, TIME, New York Times Magazine, Newsweek, and many others. She frequently leads photography workshops, is a Senior TED Fellow, and her TED talks have over 3 million cumulative views. Seaman’s photography was previously featured in our 35th anniversary issue feature, “Women of Standing Rock” and “Conscience and Resistance,” by Scott Russell Sanders.

We caught up with Camille to learn about the Autumn 2019 cover image (above): where it took place, what it means to her, and, more generally, what role her photography plays in our current ecological moment. She responded while on assignment in Costa Rica with a series of audio dispatches. Here, we’ve provided both the unedited audio and edited text:

Describe the image on the Autumn 2019 issue cover. Any specific story there?

That picture was made in Kansas back in 2008, and it was the first storm chasing trip I had gone on. The story was basically that my daughter was watching storm chasing on TV and I was vacuuming the house. I saw this incredible light and she saw me looking at the TV sort of sideways and said: “Mom, you should do that.”

Then her dad came in and said: “Yeah, why don’t you Google it?”

So I Googled “storm chasing,” and this whole world rose. One website really stood out to me. It had lightning flashes and thunder sounds and I thought, I can recognize passion when I see it. I want to go with that guy. Unfortunately, all of his trips were sold out for the year. That was May 2008. I sent him an email saying, “I’m really interested in doing this, please let me know if anyone cancels.” Less than an hour later he emailed back. “I had one spot just come up, and can you be here in three days?”

And that’s how it happened. Three days after my daughter said, “Mom, you should do that,” I was, well, doing it. 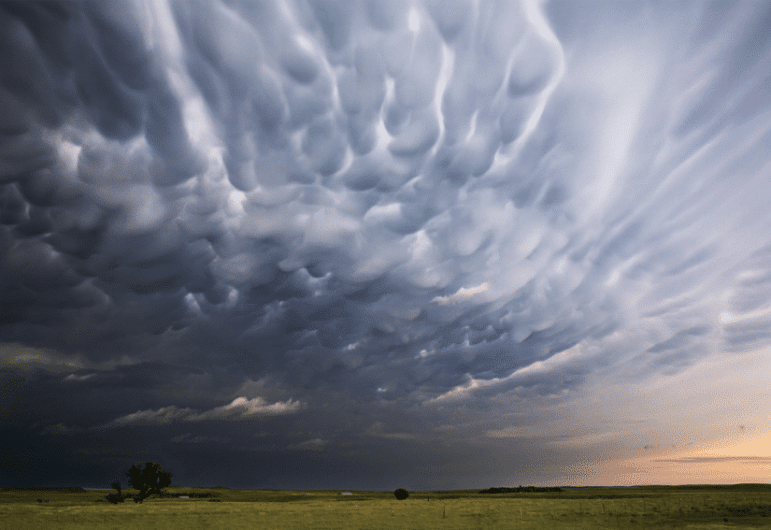 Okay, back to the cover image: This was one of those pictures from that trip. I don’t think I was prepared for what storm chasing was. It’s a sensory overload. It’s not just the visuals, it’s the smells of the charged particles, the smell of the earth, the incredible light.

It’s amazing how many roads in the United States are still unpaved, especially in the center of the country, and I’m not sure why. We just sort of forgot about the middle of our country. And here was this dusty dirt road that led onto a paved road and these power lines and the colors of the wheat fields.

“Where does this road lead to? Where are we going?”

The thing about storm chasing is that the storm can be fifty miles wide, so you have this very dark area in front of you, but then just to your west is this bright shining sun that somehow makes its way under the curtain of clouds. You get this western light and it can be just remarkable. Usually, by the time these storms are really initiating, it’s later in the day so you get this golden light, so here was this picture of this road.

I think I wondered: where does this road lead to? Where are we going? And that’s the story of that picture.

Do you remember the very first photo you ever took? In what ways does your Shinnecock heritage inform your photography?

Well, I’m not sure how old your readers are (laughing) but I do remember being a very small child and my family saying: “Give the camera to Camille. She doesn’t cut off people’s heads!”

The camera was this Kodak 110, this little rectangular camera where you put this cartridge of tiny film. The resolution of these images was horrible, but for some reason, even then, it felt fine in my hands.

I don’t think I ever considered myself to be a photographer until I was in my 30s, but it was something that was always with me. I had a camera at all times.

But that was my first image, I’m pretty sure, of my family standing together on Long Island. I don’t know if it was a special event or just people grouped together or what. Of course, that means I’m not in a lot of family photos, because I was making them. 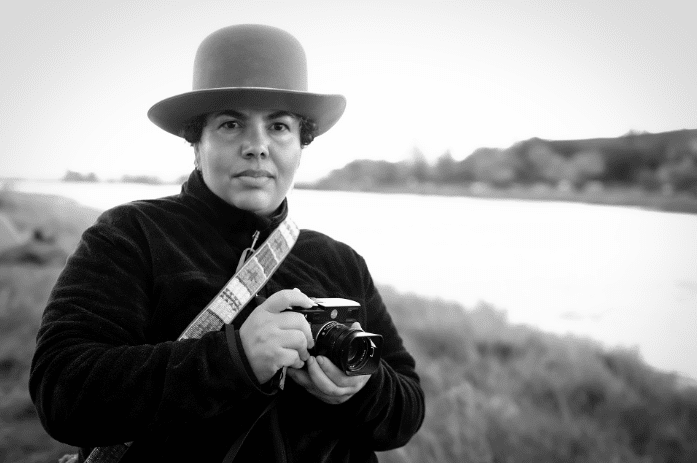 But you wanted to know about Shinnecock origins and how that informed my imagery. Well, I would like to think that intention is very powerful and, you know. For example, whether it’s a storm or person or an iceberg, when I photograph it I’m not photographing a thing, I’m not photographing an inanimate object. I’m photographing my relative. I’m photographing some aspect of my connectedness to everything, not just other humans. Trying to break out of this human-centric kind of thinking. It’s so important that we remember, that we relearn that we are not separate from nature, that we cannot do whatever we want to the planet or plant or river or fish or the land itself, and to think that it has no consequence.

We are interconnected and interrelated with everything and everyone. All are our relatives, so when I photograph, I’m trying to do it with the intention that these are my relatives, that there is no separation, and hopefully some form of that emotional connection is revealed or carried through.

In the cover image, of this road, with these poles and this light and this storm, I’d like to think that we are the storm. That is our sweat, that’s our water that makes that cloud. And so, everything that occurs to us, we have created for ourselves.

You’ve had several images published in Orion in the past. What does it mean for you to share your work in a time of tumult, uncertainty, and loss?

“We are the storm. That is our sweat, that’s our water that makes that cloud. Everything that occurs to us, we have created for ourselves.”

I think my job as an artist is to do exactly the same thing that the universe does: evolve, create, and expand consciousness. On top of that, if I can create compassion and empathy for some subject, that someone might not have had awareness or exposure to before, then it’s worthwhile. If somehow I can affect someone enough to trigger them to be a little bit more awake or aware of something that I saw or felt, then it’s worthwhile.

But I’ll be honest: I still really don’t know.