In the Autumn 2019 issue, Suzette Marie Martin creates anachronistic nature deities to confront environmental degradation in the Anthropocene age. Her ink drawings of river nymphs on reproductions of North American colonial maps mark the passage from millennia of “uncharted territory” to the disappearance of countless indigenous cultures, and extensive environmental changes that began during the European exploration and settlement of the New World. In classical mythology, Naiads were known to protect freshwater sources. Here, the nymphs’ bodies passively incorporate waterways renamed by the colonizing peoples.

We asked the artist some questions about the power and violence of maps, and what might happen to her counter-mapping nymphs in a time of rising sea levels and political instability. 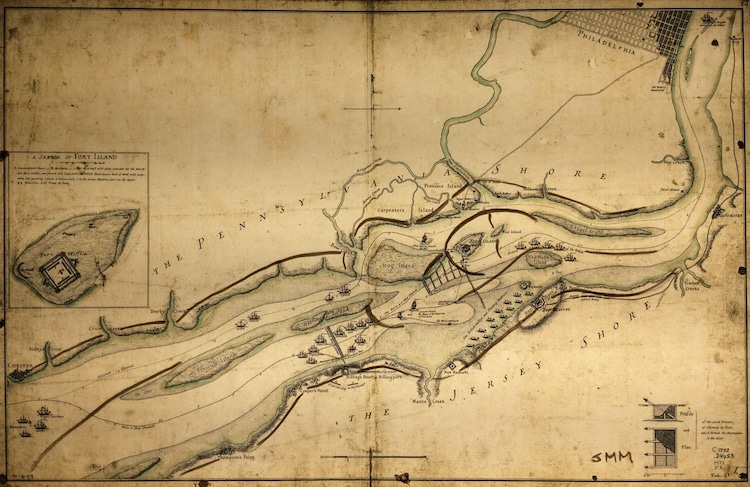 “Naiad of the Delaware River, 1777.” Faden, William. The course of Delaware River from Philadelphia to Chester, exhibiting the several works erected by the rebels to defend its passage, with the attacks made upon them by His Majesty’s land & sea forces. [1777] Map. Retrieved from the Library of Congress.

From the earliest human records and across many cultures, Nature has often been embodied by the Goddess. Indigenous peoples of the New World may or may not have represented their rivers with female deities, but knowledge of Greek mythology was embedded in elitist and patriarchal education systems of Europe, from the Renaissance forward, and carried on to the colonies by the upper classes.

Okay, let us in on your process for visualizing these nymphs.

The earliest maps of the New World were hand drawn in ink and sent back to Europe for etching and publication. I draw in ink directly onto the paper in order to connect myself to the original process. Because ink on paper is unforgiving, I prepare for the drawing with preliminary sketches on tracing paper laid directly over a print of the map, or sometimes using a digital tablet and software to draw on an image file. I try to use a minimal amount of lines, allowing the topographical features of the map and the surrounding terrain to determine the body of the Naiad. I practice my brush drawing on scrap paper, and then hope I can draw the final version without an error or a blotch. I have ruined more than one print of these maps! 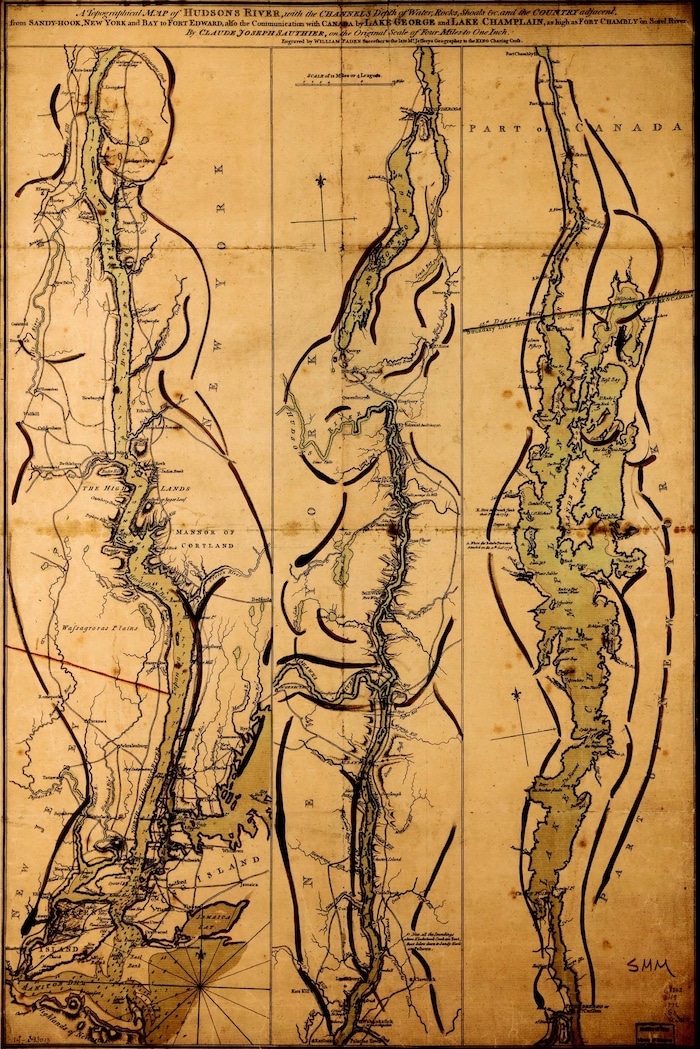 “Naiads of the Lower, Mid and Upper Hudson River, 1777” Sauthier, Claude Joseph, and William Faden. A topographical map of Hudsons River, with the channels depth of water, rocks, shoals &c. and the country adjacent, from Sandy-Hook, New York and bay to Fort Edward, also the communication with Canada by Lake George and Lake Champlain, as high as Fort Chambly on Sorel River. [London, Wm. Faden, 1777] Map. Retrieved from the Library of Congress.

Would this be considered “counter-mapping?”

Counter-mapping is a practice used to make land claims, identify areas of desired access, or convey cultural values that diverge from the dominant paradigm. I’ve known several artists who frequently repurpose old maps in collage as a base for painting, drawing, or sculptural material, but I was largely unaware of the concept of counter-mapping for social justice purposes when I began this series.

When I began this series, I was thinking about water pollution. I had been developing several series of re-imagined nature goddesses for the Anthropocene over the past several years. I wondered: How I could incorporate Naiads—benevolent nymphs associated with sources of fresh water—within this theme?

I currently live in New York’s Lower Hudson River Valley and am constantly crossing the river on its many bridges. The Hudson River is filled with toxic pollutants from urban run-off and the numerous factories that dumped centuries of industrial waste directly into its waters. I began thinking about the pre-industrial river before highways and cities and factories, and my research led me to a treasure trove of colonial era maps at the United States Library of Congress.

Looking at these simplified charts, I began to visualize the Hudson itself as a goddess, as the circulatory or digestive or nervous system. It was a way for me to depict the Nature/Human dichotomy by layering a Western mythological spirit over a navigational map, a way to depict root causes of anthropogenic problems running far deeper than twentieth century’s Great Acceleration.

With today’s climate crisis comes sea level rise and widespread political unrest. How do you see these nymphs responding to mapped territory in an age of rising uncertainty?

This is a very interesting question and one that I hadn’t considered before. My focus has primarily been on early North American navigational charts and maps of “discovery”—documents from the initial claiming and renaming of the New World by European colonial powers. So when I look at maps that depict future sea level rise, it’s hard for me to imagine a living spirit within these waters.

The river banks change with each storm, with each drought, with each degree of atmospheric heat, with each foot of sea level rise. They are becoming disconnected from the rhythms of formerly predictable seasonal changes. The fresh, healing waters the Naiads embody are becoming filled with salt surging from the seas and the remains of flooded cities, towns, and monoculture farms, toxic industrial run-off, agricultural chemicals, sewage, and garbage. I think that political unrest or dissolution, occupation, and climate migration maps may not be appropriate for Nature deities at all: this is more the realm for the Gods of Destruction. Or perhaps this makes the case that Naiads are more necessary today than ever before. O 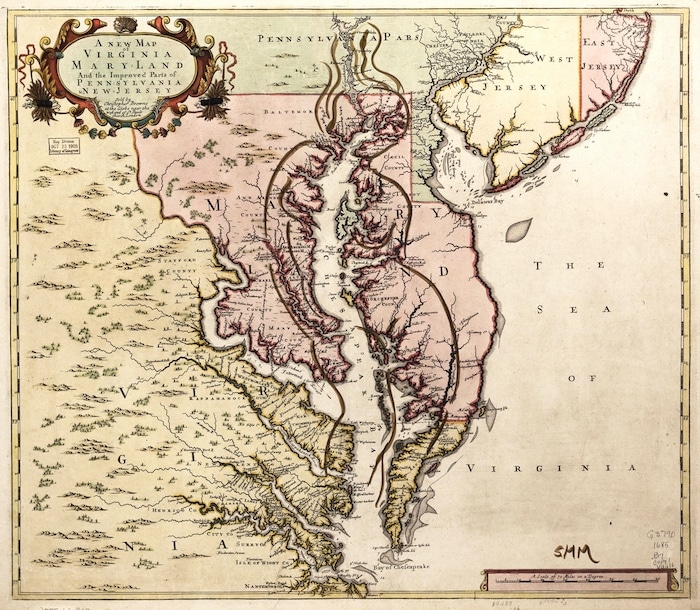 “Naiad of the Chesapeak Bay, 1685” Browne, Christopher, Active. A new map of Virginia, Maryland, and the improved parts of Pennsylvania & New Jersey. [London: Sold by Christopher Browne at the Globe near west end of St. Pauls Church, 1685] Map.Retrieved from the Library of Congress.

About the Artist: Suzette Martin’s artistic practice is informed by observational studies, goddess mythology, and inquiry into environmental issues, with references to academic art traditions and twentieth century expressionist mark making. She currently lives in a 1906 farmhouse engulfed by the suburbs of the New York City metropolitan area.