The first time I saw bioluminescence I was sure my eyes were playing a trick on me. Eleven years old, I walked beside my father on a beach in Southern California. It was a warm, dark night, and the churn of the nearby waves seemed inordinately bright, and inexplicably blue.

Is the water glowing? I thought to myself, as another wave rumbled towards us, and again, the water appeared lit from within, as if pool lights had been embedded in the sandy bottom, casting a glacial blue among the skittering stingrays and slowly scooting sand dollars.

“Do you see that?” I asked my dad, a marine biologist.

“Bioluminescence,” responded my favorite voice in the world, as if he had been waiting for me to ask the question. And though I couldn’t see his face, I knew he was smiling.

Another invisible wave peeled in the dark, sending a line of electric blue rolling right down the beach with a roar, and we both cried out with that sublime astonishment reserved for the likes of shooting stars, breaching whales, and now, water that gallops with light. In those days, all I cared about was Michael Jordan, but in that moment, I was abloom with wonder, because the water really was glowing, and my hero knew the six-syllable word that gave it its name.

It would be fifteen years before I saw bioluminescence again, and, like so many precious things that slip from our reach, I had forgotten about it. It was a few years after my dad had died suddenly that I returned to the sea. I was twenty-six, and some deep place in me knew that I needed to be surrounded by that much blue. That maybe, somehow, I’d find him out there in that never-ending waterscape.

It was a moonless night in the Red Sea. I walked to the bow to check the sails and glanced down at the water below me. I froze. In what should have been total darkness, nacreous braids of light shimmered and quaked off either side of the bow. I stared at the rivery light, like water within water, and once again found myself wondering if my eyes were playing a trick on me. Then his voice rang in my mind as if he were standing right beside me again.

A few nights later I lay in bed trying to sleep before my pre-dawn watch. We were somewhere off the coast of Sudan, and it was stifling hot belowdecks. I was flat on my back, wishing for some wind to blow in through the hatch. Staring into the dark, I thought of the first place I had learned about the sea—Duxberry Reef in Bolinas, California, where my dad would take me whenever the tide was out. I pictured him there, standing in his faded, red raincoat surrounded by little pools of water that all catch the sky, the sea pulled back like a curtain behind him leaving fields of kelp exposed to the light of a cool, clear morning. Poking out between the reptile-green and translucent-yellow ropes of kelp are shining rocks, furry with life, covered in mussels, barnacles, limpets, chitons, sea cucumbers, and gardens of anemones that resemble fluorescent green flowers made of gelatin and nerve endings. He’s holding a thermos of coffee in one hand and a twenty-armed sunflower star the size of a dinner plate in the other, laughing as he tries to help me pronounce the scientific name of the sea star.

“Pycnopodia helianthoides,” he repeats slowly, smiling more brightly each time I stumble over the twenty-armed pronunciation. He knows all the names of the creatures that surround us, both the scientific and the common, and why each animal is as important as the next in this crawling, oozing web of intertidal life. 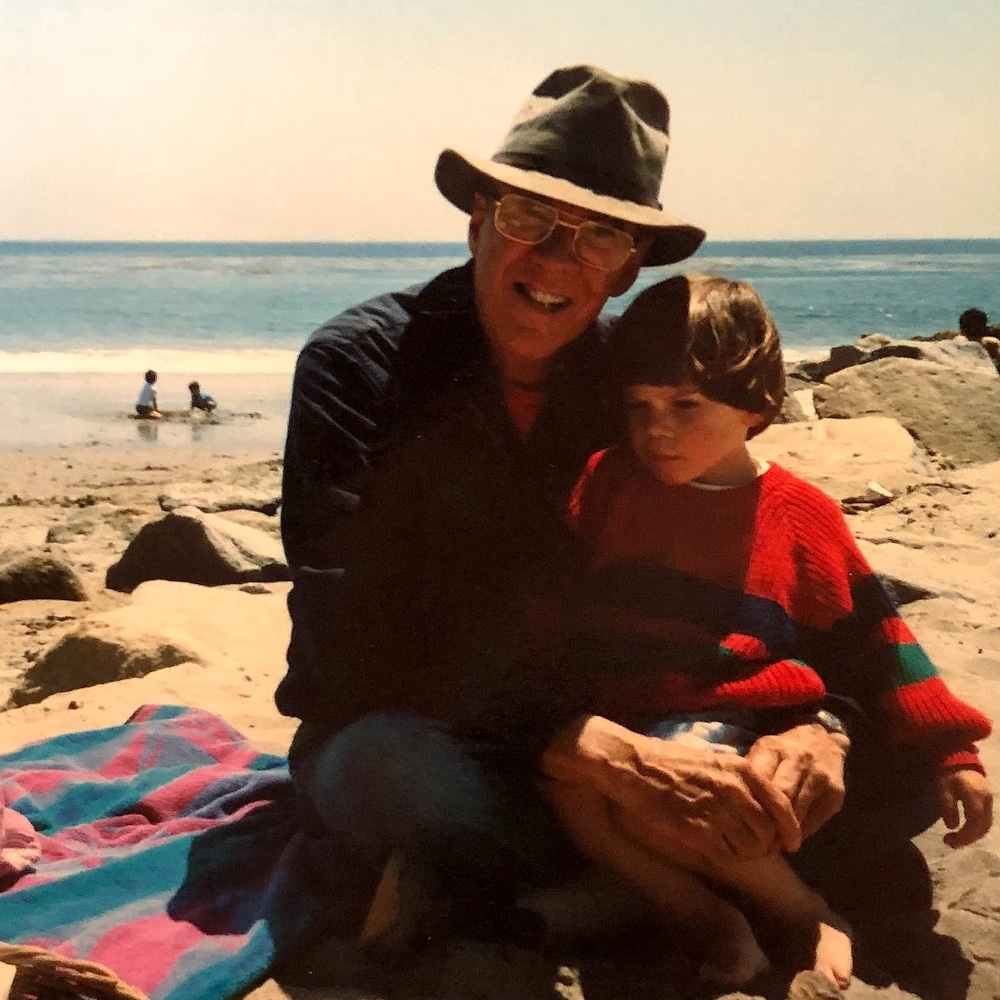 The author with his father, Henry Scott. California, 1987

I rolled onto my side in my bunk, facing the thin steel hull that was all that separated me from the rest of the ocean. It was then that I heard them.

Sitting up fast, I pressed my ear to the side of the ship—listening as the creaking clicks and high-pitched squeals grew louder and louder. I jumped out of bed and ran up on deck to peer over the bow. And there they were, the torpedo-shaped bodies of fifteen bottlenose dolphins, completely encapsulated in crystalline-blue bioluminescence as they zipped and darted and played in front of our ship. Baby dolphins no larger than sleek piglets zoomed along, never straying more than a yard from their parents, all of them wearing full suits of light as their every motion caused the dinoflagellates to detonate like unicellular fireworks by the millions all around them.

It began with those gleaming dolphins, and built from there. Surrounded by saltwater in every direction but sky, I finally stopped being angry at a world that had snatched away my favorite person with its metastasized cells, and instead fell more deeply in love with this planet than I had ever been before. 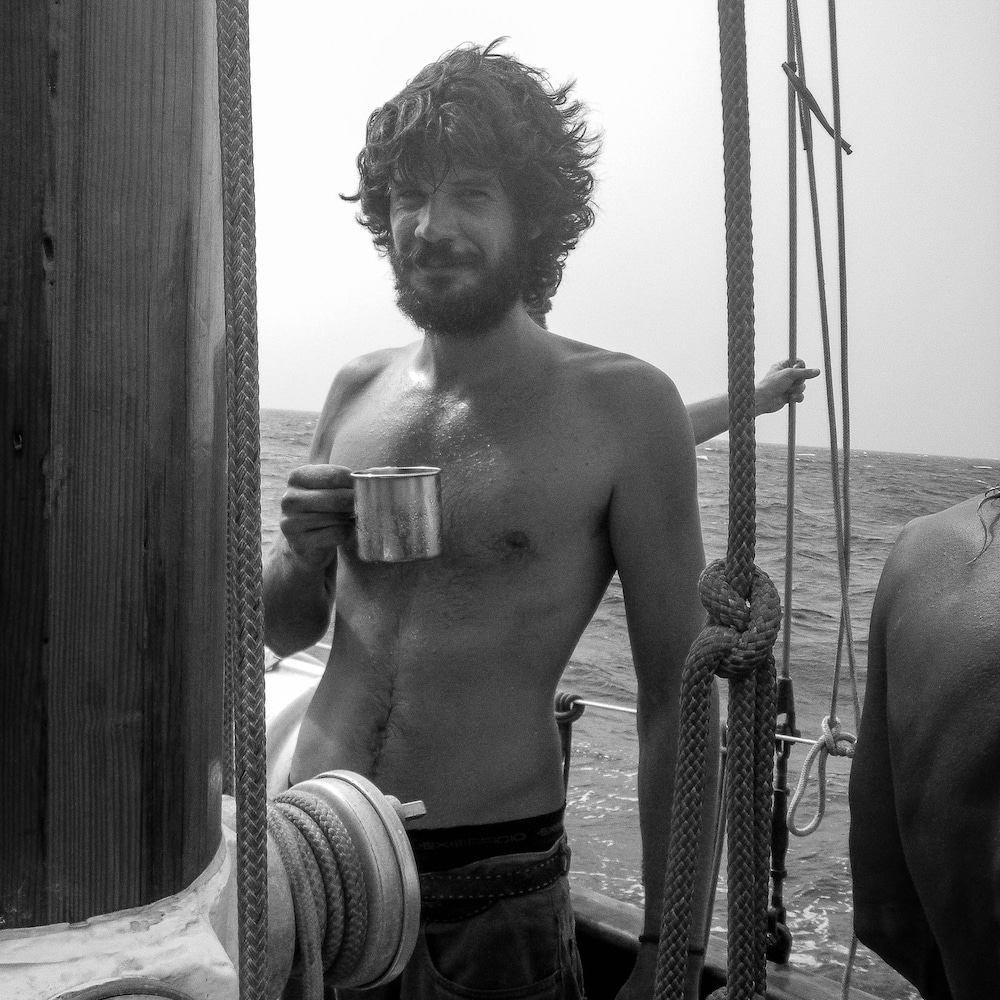 As we spilled from the Red Sea into the Gulf of Aden, and then out across the Indian Ocean, I sat at the bow every night, watching as the tightly knit darkness unspooled into long, twisting runnels of pearlescence beneath me. I finally understood why he had taken me to the tidepools all those mornings as a boy, why he had brought me to the edge of the sea. Those tidepools were a nest woven of kelp and shell, perched on the edge of a water planet, blue and briny, and without my knowing it, he was teaching me to look toward the horizon—preparing me to one day fledge the shore. And now here I was, flying out over the ocean, so far from home. It’s precisely what he would have wanted, whether he was there to fly by my side or not. As I sat with my legs dangling off the wooden bowsprit watching the water sparkle below as if a pouch of starlight were being poured into it, I could feel him sitting there beside me. And though I couldn’t see his face, I knew he was smiling.