Young Readers Ask is an Orion web series where young readers interview authors about books. This is our third installment.

From the publisher: “At the age of nineteen, Lara Prior-Palmer discovered a website devoted to the ‘world’s longest, toughest horse race’ — an annual competition of endurance and skill that involves dozens of riders racing a series of twenty-five wild ponies across 1,000 kilometers of Mongolian grassland. On a whim, she decided to enter the race.” As she boarded a plane to East Asia, she was utterly unprepared for what awaited her. Rough Magic: Riding the World’s Loneliest Horse Race (Catapult) is Prior-Palmer’s tale not just about the race, but about her journey there and back.

Isa Guerrero: Okay, what did your parents say when you told them that you were entering the world’s toughest horse race, on the other side of the world, on a whim?

Lara Prior-Palmer: My mother seemed quietly joyful and my father shouted at her for encouraging me. Neither of them was able to influence me, though. I followed my heart.

What did you wear during the Derby?

The really stretchy blue Lyrca jodhpurs, plus padded shorts, knickers, long socks, two pairs of chaps, a helmet, a t-shirt, a denim vest from eBay, and a rain jacket in my backpack. That’s it.

What is the least amount of time anyone has ever taken to complete the Mongol Derby?

It’s hard to measure because the course length is different every year, and the race isn’t taken so seriously that people are keeping track of such statistics. I do remember Richard Dunwoody, the photographer, commenting on how quickly I was going, as though he hadn’t seen that in past years.

You seemed to eat mutton a lot at the gers (read: yurts). What did it taste like? Was it good?

Hard to say. It had a deep, rich taste. I’m a vegan now, but I think I would eat it again if I returned to Mongolia, out of courtesy to anyone kind enough to offer me food. I stopped eating meat when I came to California for college in 2014. It just didn’t seem necessary, and it seemed weird that my relationship with horses had run alongside my willingness to eat farmed meat before that.

After I’d been treated for cancer, I realized I was coughing up phlegm in reaction to dairy. I was also learning more about the large-scale chicken and milk industries, and I just decided that, unless I were to kill the animal, or milk it with my own hands, I was not going to eat it. We don’t tend to think about where our meat or dairy comes from, or how exactly the animal is living, or what day it died. We watch documentaries, perhaps, but then we forget about them. On the Mongolian steppe, however, people tended to have a closer relationship with the animals they were eating.

Were you ever nervous about sleeping in these random gers?

I wasn’t nervous. I was clueless. I thought there would be no one around to stay with and that I’d have to sleep tied to my pony. Which I was more excited than nervous about. But I found a fine line between these two emotions. I think they might be the same thing. 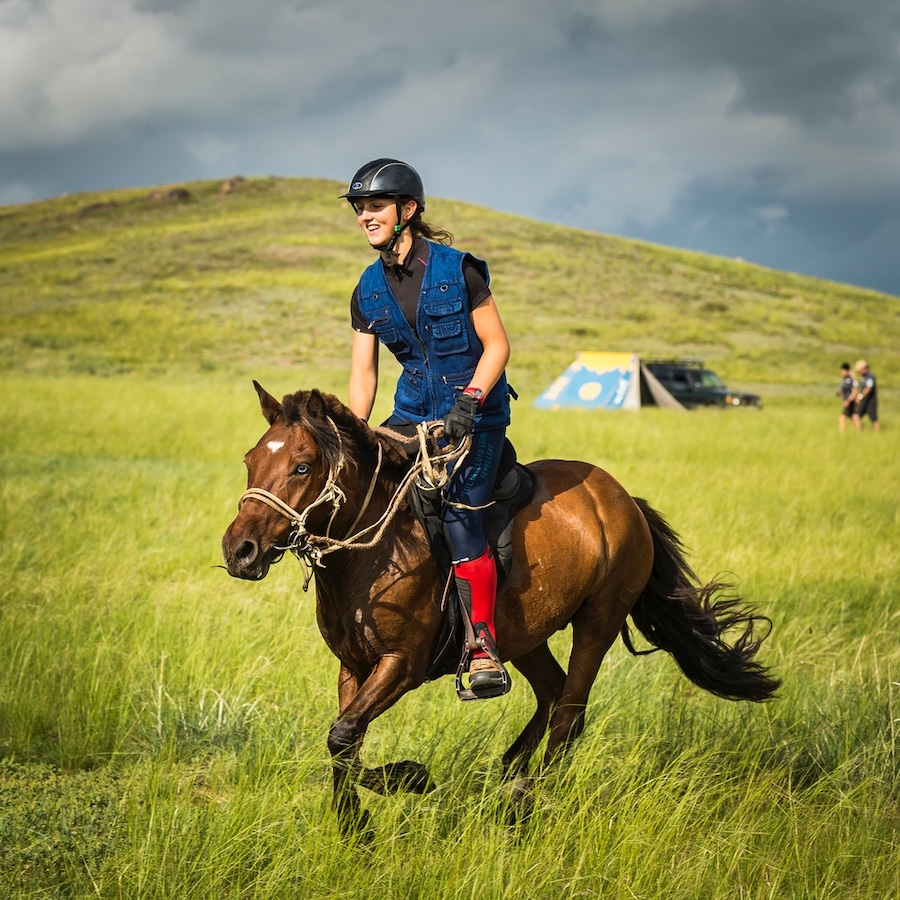 Was your first animal a donkey or a pony?

Actually it was a hamster! I had begged for years for a hamster. My mother was not keen, even though she had hamsters growing up. Eventually she surprised me — she never did surprises — by getting me one for my birthday. Hammy. Hammy escaped once and was found a week later in the chimney place with a blackened nose. She died two-and-a-half years later, buried in the long grass with many tears in her memory.

What’s with the Winnie-the-Pooh thing in the book? Was that just the only notebook you had on hand or do you have a special feeling for Pooh?

Oh, that’s a brilliant question. You made me sigh! So my mother has a special feeling for Pooh. I remember, growing up, her narrating Pooh and the other characters with such precise tones. I used to like Tigger a lot, but I don’t think I was that enamored with Pooh—I didn’t really get his existential honey-eating crisis when I was younger.

Tigger had boundless energy and I loved that — the way he could keep on bouncing. It gave me energy just to watch. I guess I was also very sporty, and Tigger represented the energy sports both asks for and cultivates more of (the more sport I did, the more energy I felt I had access to).

Did you find a new voice in yourself when writing this book ?

Yes! What a question. That’s one of the things the book gave me. Not just a new voice but the chance to discover many new voices, and realize I was not a single, fixed personality. For example, there’s that nineteen-year-old voice of energy and naïveté, and then the slightly wiser voice that questions, or slows, the charge of the nineteen-year-old, and the more lyrical, poetic voices that like to bask in the beauty of sentences themselves. There’s also the emotionally frank and bald voice (e.g. the bit about Aunt Lucinda’s boob getting bitten — “she was cross. I felt bad.” — not a way I’d ever have written as a teenager, when I was too shy). And I bet you can find more voices in the book which I haven’t mentioned.

Did you choose to jump around in time in the book, or did it just come out that way?

It sort of evolved to be like that. Originally, it was written totally chronologically, from the beginning of the race to the end. Then I tried to summon other threads into the narrative — from childhood, philosophy, etc.

You seem to mention Genghis Khan a lot, but was he good or bad?

My brother Harold has had this quote on his Instagram for years: There is nothing either good or bad, but thinking makes it so. It’s Hamlet. I hope that answers your question?

I think so, yeah. So would you ever do the Derby again?

If I could afford to enter! I managed to get a rather large discount when I entered in 2013.

How has your life changed since the Derby? Has it changed?

Yes, it has changed, as life is always changing, but the Derby hasn’t necessarily caused any change. Certainly there was a release of energy after it, of a certain faith in being alive in this world, knowing that space and time — of the race and my experience of it — now existed.

What is one thing about you that would surprise people to know?

Hmm. It might be possibly surprising that I am more scared of bicycles than horses. Not very hard because I’m not scared of horses.

What’s the best story that you had to leave out of the book?
Haha. Well, I left it out for a reason, didn’t I…