TO BETTER UNDERSTAND what makes a perfect Orion cover, we recently conducted a survey. After 1,200 readers weighed in, this is what we learned: There is no perfect Orion cover. Sure, the ten most beloved covers had some similar themes, but each one exuded its own genius, its own idiosyncratic tone and character, its own resonance. Every Orion cover has its own unique story to tell.

Our Behind the Cover series attempts to tell these stories. We reach out to the artists behind the images to learn more. For the Autumn 2020 issue, we called western Massachusetts-based visual artist and naturalist Shelley Lawrence Kirkwood, to learn more about the pear, the bite, and the patterned perforations.

Okay, everyone wants to know: How many pears did you go through to get this shot?

I went through so many pears it was tragic. Orion’s editorial team had given me a painting of a pear they were particularly drawn to, so I worked off that as my guide. I was obsessed with getting the perfect bite—it’s not as easy as you might think! Also, pears are definitely not cooperative as subjects; they oxidize and turn brown almost immediately and love to tip over at the last minute. By the end, I had a pear graveyard. My kids got a lot of the runoff from that shoot, and my chickens were definitely happy to polish off the rest. 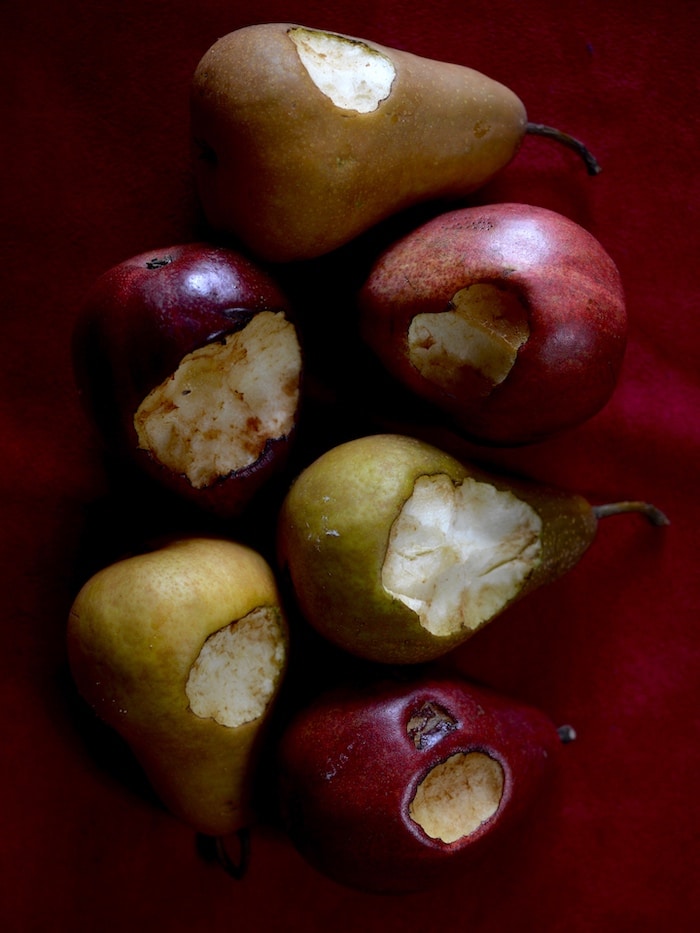 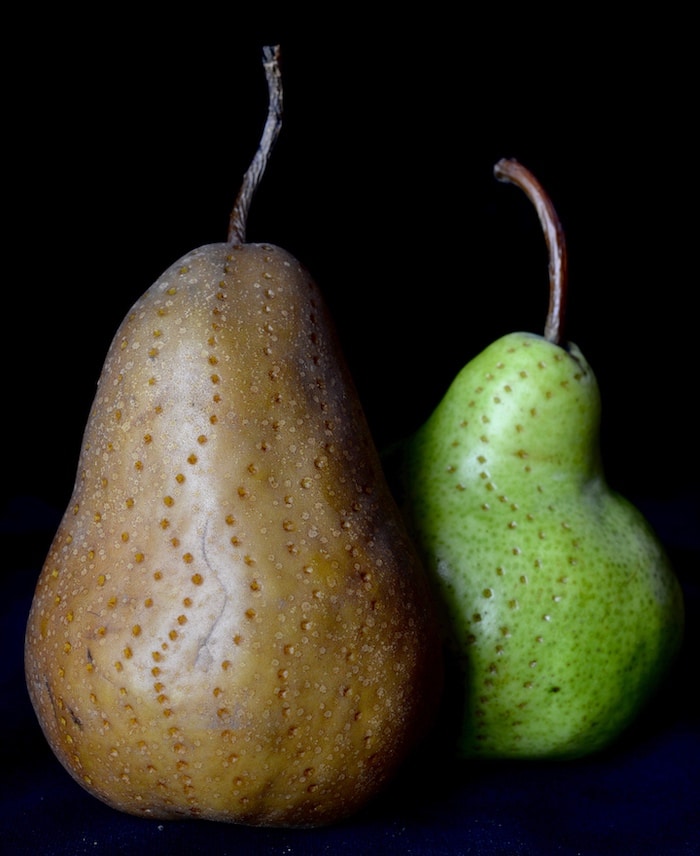 Tell us about the perforated patterns on the pear? (Also, try and say that five times fast.)

So initially I did produce a number of straightforward pear images, but I wanted to go even deeper. I was thinking about making an image that would ride the line between reverence and destruction, which so often defines our relationship with the natural world. Sometimes that tension becomes quite literal and visible.

For example, there is this incredible tree at the top of a clearing where I live, and one day I noticed that someone had carved their initials into its trunk. It was at once both a nostalgic remembrance of relationship and a selfish act of destruction. I spontaneously recalled that tree while working on this cover and immediately grabbed a carving tool. My first carving was the classic arrow piercing a heart. It replicated that conflicted sentiment for me, so I continued to experiment with a number of other techniques, which is what you see on the cover. 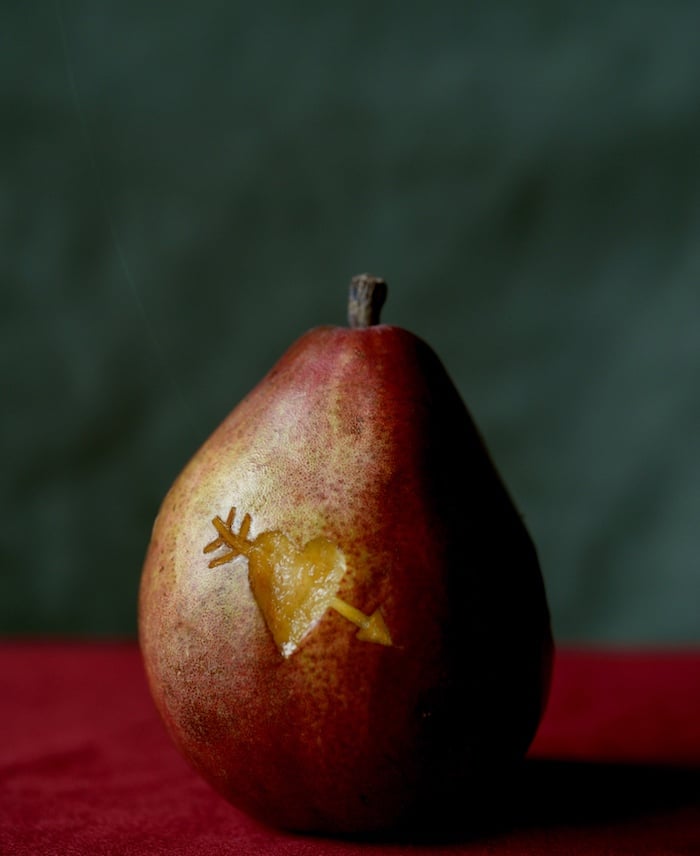 Do you often use fruit and food as subjects for your work?

I’ve been working in food photography for many years. I actually started as a food columnist straight out of college—before it was a big thing—and then did it professionally for several years before returning to graduate school. I resumed many years later, and it’s definitely a passion of mine. My personal work is based in the landscape and in botanical still lives, so the assignment dovetailed these two aspects of my professional and creative life perfectly.

You say on your website that you are interested in viewing nature at close range, “removed from its original context.” What draws you to that sort of intentional, ecological displacement?

My work has always been more about the practice than the result. It comes with foraging on an almost daily basis. It involves a lot of time, a slowness that’s just not replicated anywhere else in my life. It allows me to consider my environment, my sense of awareness in a given time. It helps me process what otherwise becomes a jumbled mass of memories and feelings, to truly examine the landscape that constitutes my notion of home.

In recent years, I’ve found that paring down objects from the landscape takes that experience a step further. It’s not a political statement, but almost like a meditation, where you focus on one object as a means of bringing certain truths forward.

I also became interested in looking at objects that were dying or otherwise imperfect. Wabi-sabi. I didn’t use this as an ideological approach to my work, but I did stumble upon it after having made a shift in my practice.  It was a real aha! moment when everything made sense. That was one of the bigger breakthroughs I have had in recent years. 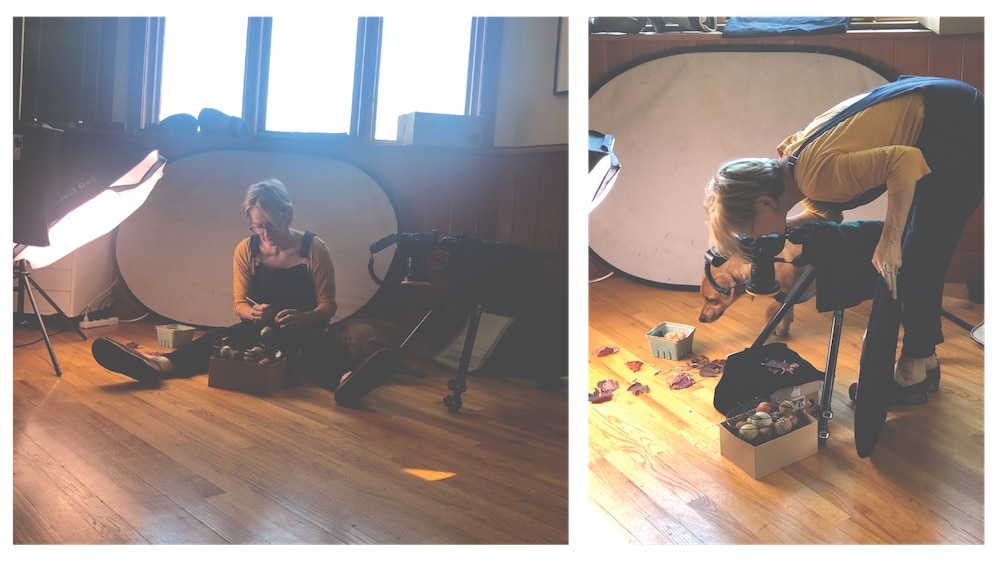 Your cover image evokes so much more than words rarely do about abundance, about fecundity and its passing, a taste of the ephemeral, a life savored then composted and offered back to the land with open arms.

It was a gift to be offered such creative latitude with this project. The work was made in the middle of summer, at the height of the growing season here, when you can find the most exquisite produce. And the fact that I was able to go through that whole growth and decomposition process in real time as I worked on the cover and photo essay (included in the print issue) was quite immersive. Although the fruit fly problem was out of control! I do a lot of work with mushrooms in particular, so my family has grown accustomed to having piles around the house of organic objects in various states of decomposition. 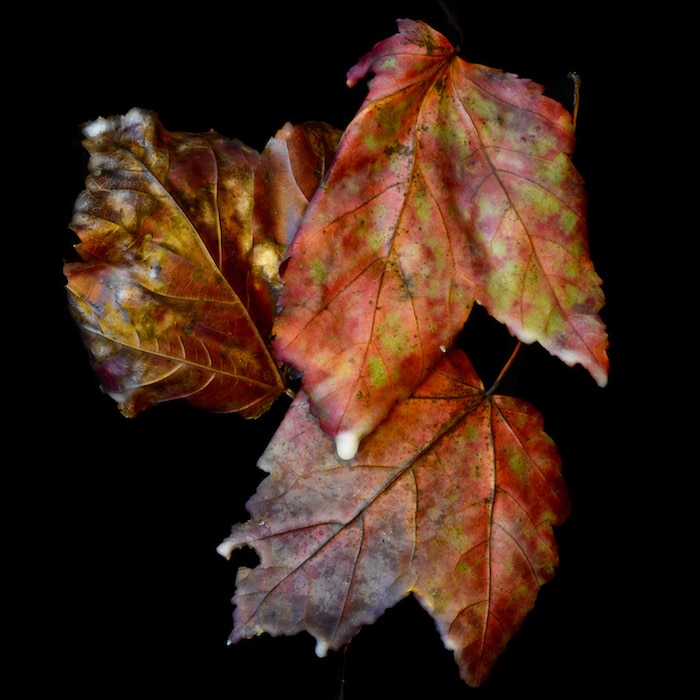 What are you currently working on?

I’ve been collecting flowers and plants from my garden and the meadows near my house. I’m making dyes with these plants and using them to color eggs I gather from my flock. I’m also waxing fall leaves as a means of preserving a moment in time. I’ve been obsessed with the idea of freezing time beyond the act of photography itself. The wax seems to freeze the leaves as if they were suspended in midair, mid-flight. It’s so much fun and I’m totally compelled by all the texture, color, and fragrance. I’m homeschooling my two kids, which probably explains why I’m doing a lot of DIY craft-type processes. Maybe I should do a kid crafts book for adults next!