Orion’s Autumn 2020 issue includes a booklet of spells written by Robert Macfarlane and illustrated by Jackie Morris, as part of The Lost Spells, recently published as a follow-up to their previous collaborative sensation, The Lost Words.

Our readers were so enthralled by the illustrations that we decided to offer a select group of subscribers a sneak peek of The Lost Spells, then asked them to send us their questions. Here are five of our favorites, answered by Jackie Morris. 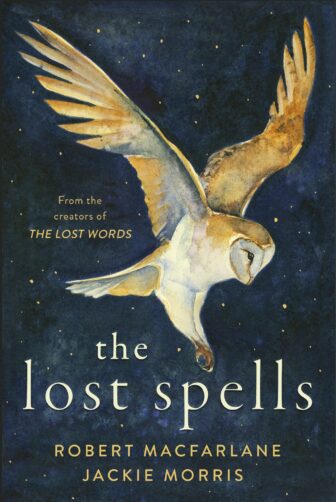 “Even more so than in The Lost Words, this new book seems intent on asking us to imagine the real loss of many of these marvelous creatures and beings—most explicitly in ‘Goldfinch’ and ‘Heartwood.’ I wonder why you chose to conjure this so much more directly in this work of spells?”

For me there was an urgent need for this loss to be taken seriously. Imagination is a curious thing. We imagine monsters. We scare ourselves. People love horror movies, but it is hard to really imagine real loss. It’s hard to see those flocks diminishing year after year. When I was a child, this time of year thrilled me with the dancing flap of lapwing flocks. My father’s eyes would feast on flocks of hundreds. Now sometimes I see twenty. Sometimes only one.

For me, this loss is the true horror story. And yet I don’t wish to terrify people. Rather, I seek to inspire in them the wonder of nearby wilds, to put into the hands of children a tool they might use to reawaken that childlike wonder in their parents. Because everything begins with the imagination. We cannot continue to pretend that everything will be okay. We need to imagine better ways to live, to put life before economics, to see the problem and make a change—more so now than ever. 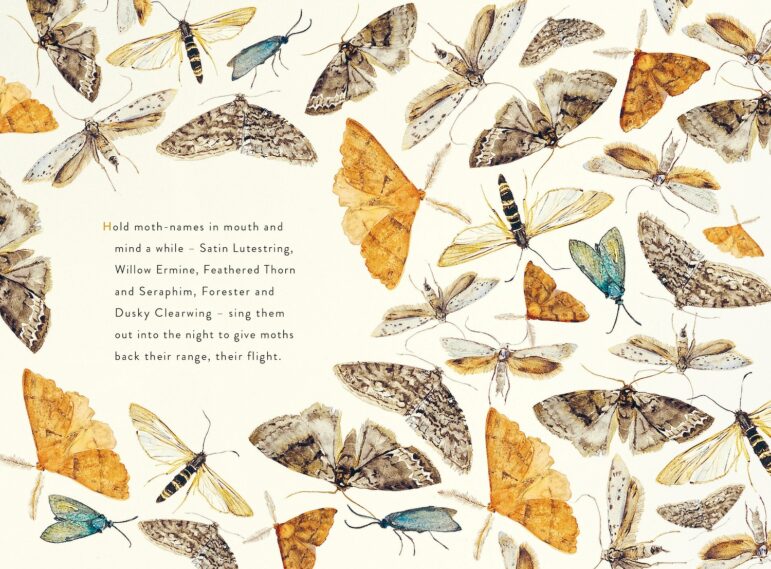 “I was interested in the inclusion of ‘Moths’ and would be interested in learning more about why you two chose them. How did you come to appreciate them? Was it as a child or did it come later in life? I had never thought about (or said) their names before. How did you come to appreciate the mystery in their names and texture? Was it through a scientific study or more organically?”

When I was a child I would read in bed with the lights on, and the room would fill with moths. I loved the brush of their wings against my face. I was fascinated by how the light drew them in, even as their shape drew me in.

I grew up in the Vale of Evesham, and there was a big moth called a Bobowler. These names, to me, read like poetry. They were often given names by artists. Years ago, artists and scientists were the same creatures; there was no separation. Scientists drew their own images or employed artists to draw them. So it was artists, writers, and poets who traveled the land picking up the names, making them up when they couldn’t find them.

I love the scales of their wings, the way they communicate through scent, how they play a long game of evolution with bats, how they dance in the night. And like Rob, I wanted children to understand that, as with the word bird, the word moth is not enough to encapsulate the utter wonder of the moth world.

Moth numbers are falling. Some may look at the world and wonder why they should worry about such loss. How will it harm us? We are all connected in this world. We all need a healthy environment, free from pollutants in order to thrive. I do not wish for a world without that soft wing brush, that flit of twilight movement, that beautiful sense of otherness that loves the night. 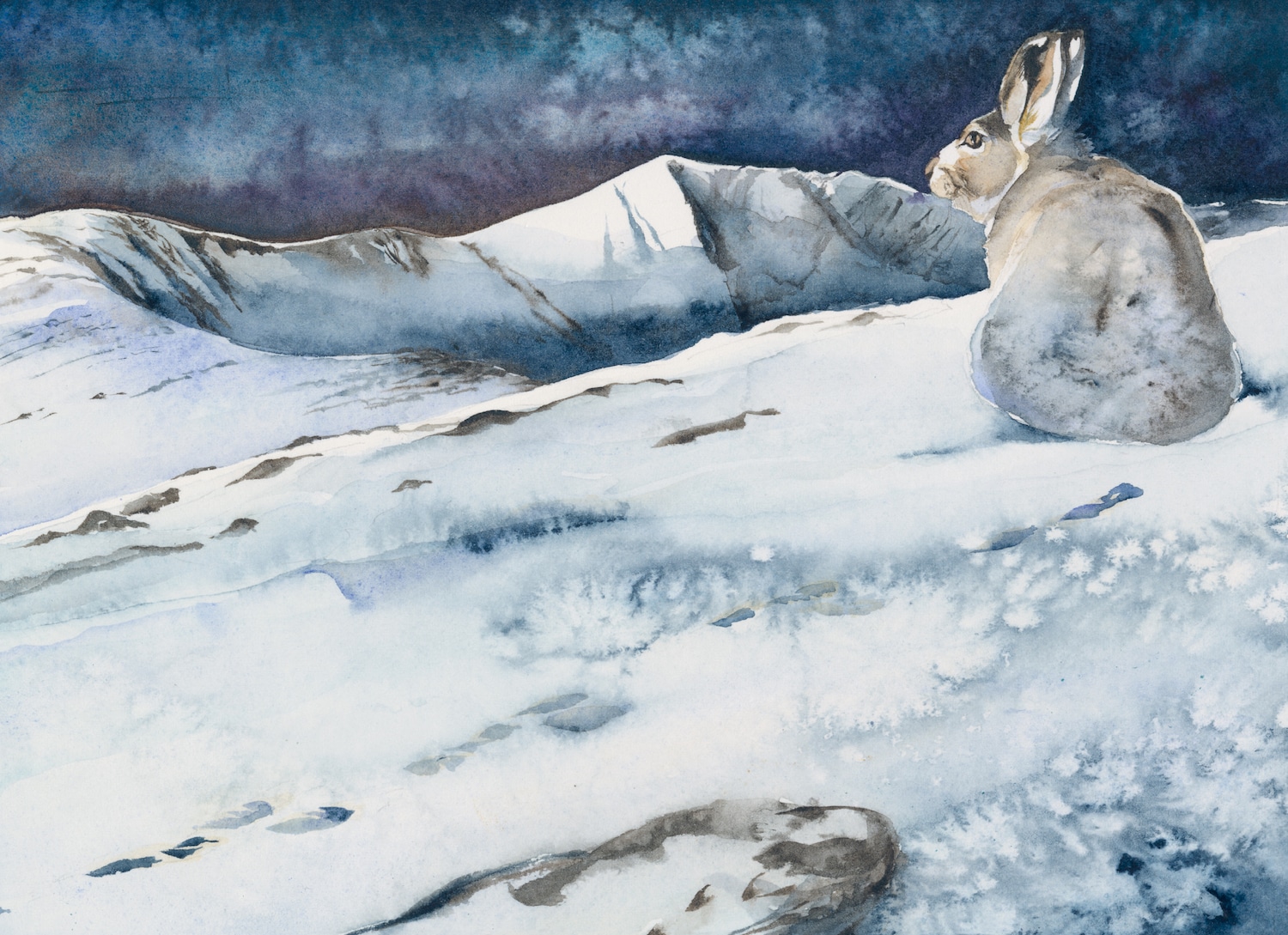 “I was immediately drawn to your exquisite illustrations, Jackie, as they evoke so much more than words ever could for me (though Macfarlane was so masterful with every spell!). Might you speak to the relationship between the two—image versus words?”

“Image versus words” suggests something adversarial. Indeed, in some illustrated books the images fight with words, but I hope they don’t in our books. Part of this is because we have an amazing designer in Alison O’Toole. Robert and I worked closely together in shaping the book. Words complement images. Images complement words. But the strength I think is partly bound up in our growing friendship.

We met in The Lost Words as strangers, and I knew Robert through his words. He had read a couple of my books too. Robert lives in Cambridge, and, even though I live two countries away, across England and the width of Wales, we work closely, throwing ideas through the internet. Now and again we meet to talk and learn from each other. 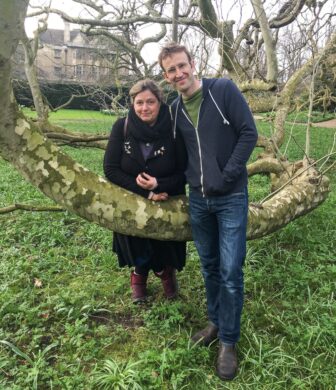 There is power in both words and images, and if you can get it right, the combined power can cast a spell. Words are just images to represent sounds. Read aloud, or in your head—it’s all the same. I think the strength of our books lies in the respect we have for each other, for words, and for images.

One of the accidental consequences of our book can be told in this story:

A woman returned to the U.K. from Australia to visit her ninety-six-year-old father, living in a care home with dementia. She brought with her a copy of The Lost Words for him. He’d not spoken for maybe a year, and it was thought that he was in the stage of dementia, where his language and memory were gone. He turned the pages and, when he arrived at the “Bramble” page, he pointed to the blackbird and said, “Blackbird. They would sing in early spring. Then we would know summer was coming.”

Words and images bringing to mind an almost lost memory. In fact, the book has been used widely with dementia sufferers, as well as reluctant readers. Words, images, design. Together.

“I am an expat in London and enjoy seeing windbreak lines of Lombardy poplar in north London. I’ve always thought that it was a tree that gets no credit, so I was glad to see it in the glossary with a nice illustration. I wonder if you two considered it for an entry, because it’s a tree that doesn’t get a lot of appreciation, as far as I know, but is very common to urbanites seeing nature around them.”

Yes, I remember lines of poplars in the landscape of Worcestershire where I grew up. Poplar is in the “oak” spell, which is how it earned its place in the glossary. And the glossary came late in the design of the book, when I realized I had threaded so many species into the images that weren’t actually in the words, and that it would add a curious “puzzle” element to the book.

I’m falling in love with trees at the moment, in particular, the aspen. Birch and silver birch were promised spells begun early in the year, but the words eluded Robert. He knew how I loved to paint them, but somehow it didn’t sit right. Then, right at the end, the words came, and with them, a lullaby for our times—shelter from the storm. 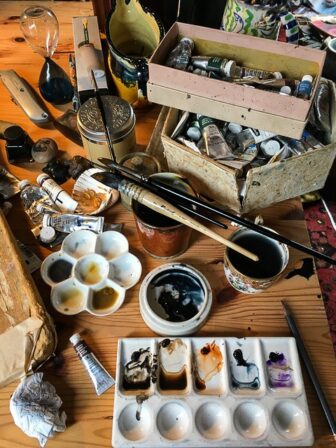 “I thought ‘Heartwood’ was a different sort of entry, a sort of nonliving one, and was curious why you both felt strongly enough about heartwood to include it along with all the ‘living’ species?”

“Heartwood” was one of the first spells written after The Lost Words was published. Not an acrostic, but a charm against harm for the trees and the people of Sheffield. Sheffield is a city in England, known for its industry, but astonishingly, when seen from the crags above, it looks like a forest with a city built inside it. Everywhere, mature trees. These trees were being felled because of an inexplicable contract between the council and a private company.

People were out on the streets and up in the trees, doing their best to prevent this vandalism. Brave people who, in many cases, had not stood against the law before. They weren’t diseased trees being felled. This is why Robert wrote “Heartwood,” which became a charm hung on the trees, then sung around the trees, then a charm translated into many languages and sung by people who saw their trees and landscapes threatened by logging. It earned its place in the book.

The thing that perplexes me about this question is the statement that “heartwood” is a “nonliving” entity. Even a tree cut down is a place that abounds with life. Even the stump of a tree will regenerate if left to do so.

The world made no sense to me growing up in the U.K. until I discovered myths, stories, beliefs of First Nations people: Australian Aboriginal people, hill tribes, those who believe in the life and spirit of all things, that the land, river, mountain, and rock are all sacred, that decisions made on governance should consider seven generations to come.

These days I grieve when I see trees cut down to make way for roads. In the U.K., ancient woodlands and orchards have been swept aside for the folly of HS2, a behemoth railway to shave minutes of one’s journey but that will damage ecosystems for centuries. For me, the value of life is far more precious than the value of money. A goldfinch is far much more precious than gold, and heaven help us when all their gold is gone. O