JETSONORAMA is a photographer, public artist, activist, and physician who has been working between Monument Valley and the Grand Canyon on the Navajo (Diné) Nation since 1987. He coordinates the Painted Desert Project, a community building project that manifests as a constellation of murals across the Navajo Nation, aimed at reflecting the love and appreciation of the rich history shared by the Navajo people.

Chip is a member of the Justseeds Artists Cooperative, a 2018 recipient of a Kindle Project gift, and, in 2020, was one of a handful of artists chosen by the United Nations to recognize the seventy-fifth anniversary of the United Nations’ founding. Thomas still practices family medicine at the Inscription House Health Center, a clinic outside the village of Shonto.

We reached out to Chip, to learn more about the story behind the cover. 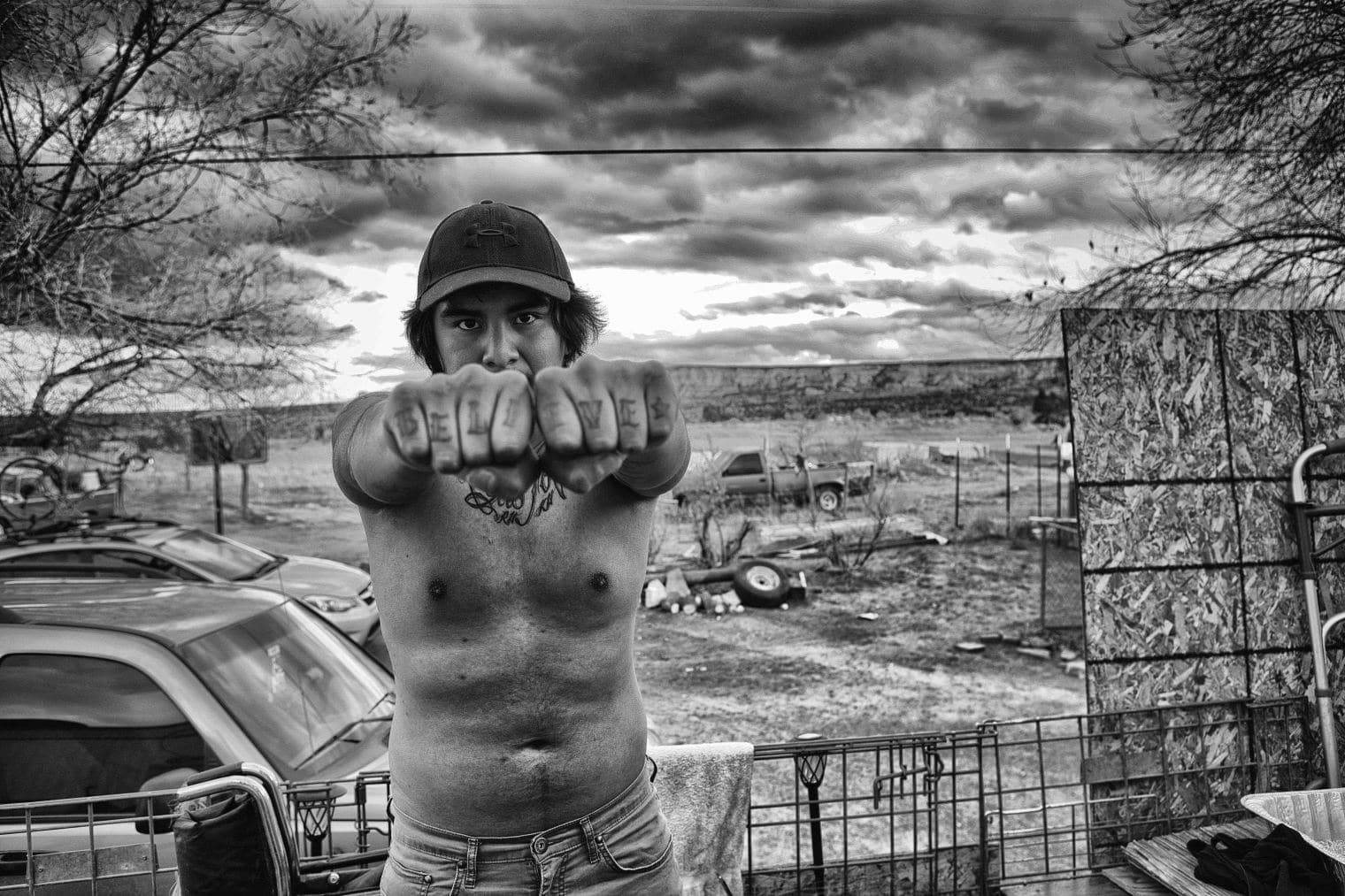 BELIEVE. Can you tell us a bit of the backstory behind the Winter 2020 cover image?

I was curious about the subject’s—Jordan Nez’s—tattoos and asked him to share with me his story. Here’s an audio interview with Jordan, where he shares the story behind his BELIEVE tattoo at 00:12:00:

“Believe. That has basically been my motto when times get tough. When things get hard I have to look at my fingers enough to tell myself, this is it, Jordan, you gotta believe in yourself. Don’t fall. Things may get hard on you. People may die around you but believe in yourself. Be proud of who you are because God gave us all the shoes to fit ourselves, so all we can basically do is just put them on and wear them.”

Meanwhile, in early April 2020, shortly after lockdown started, I was approached by the editor of Art Journal Open about doing a project around the uniqueness of this moment. I approached five poets and two other visual artists to collaborate on an online zine and physical book to express our feelings about the pandemic. I bring this up because there was a Navajo poet named Esther Belin who also chose this same cover photo image to write a poem about, a poem that imagines a time post-pandemic when we’re all able to breathe deeply and freely: 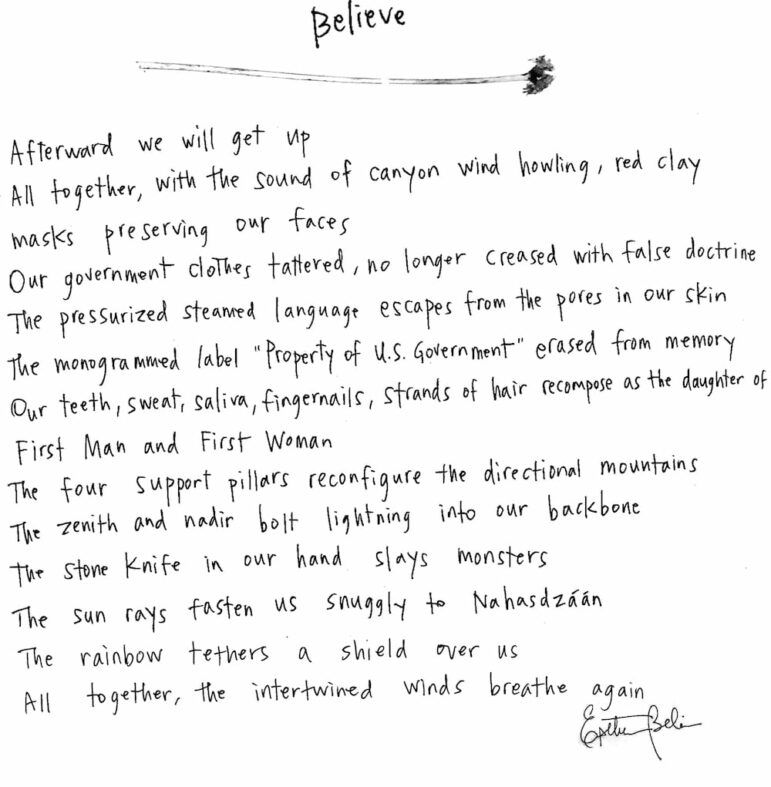 What would you say lives at the deepest core, the bones, of your creative practice?

I’d say a time investment in getting to know the people I’m photographing, and attempting to use compelling imagery to tell an engaging story. My work is influenced by photographers like W. Eugene Smith, who was considered a humanist photographer and storyteller.

I was interviewed in 1995 and was asked a similar question. At that time I was going out into the community where I live on the Navajo Nation, spending time with people and photographing in black and white, then developing and printing the film in my home darkroom. I told the interviewer that my work has a bias as I attempt to challenge negative stereotypes of people of color in the media.

Now I hear from viewers that my large-scale public art of Diné people gives visibility to people often forgotten, often overlooked, or thought to have been exterminated—preserving the shared humanity element I was pursuing thirty years ago. 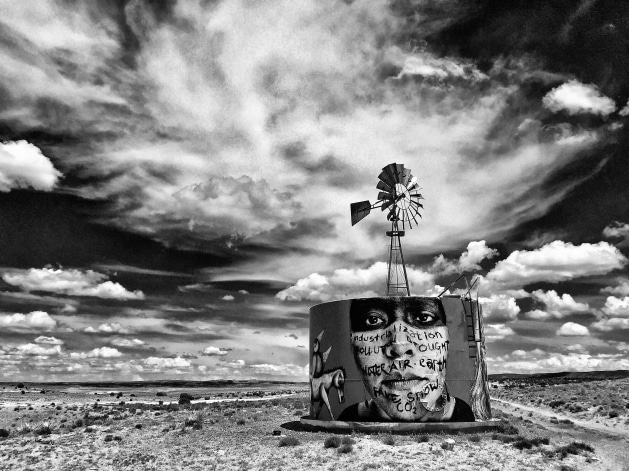 Is there a specific physical structure or surface that haunts you, or some ultimate canvas upon which to display your work? And is the art piece set in your mind first, or does the structure inform what work you choose for it?

On the Navajo Nation there are lots of Quonset huts and roadside stands made of oriented strand boards (OSB). Those surfaces are tedious and frustrating to work with. Invariably, the OSB panels have gone through many cycles of getting wet and drying such that the particles protrude off the surface of the boards. In trying to install on Quonset huts, one has to try and get the paper into all the grooves to enhance the life of the piece.

In terms of the ultimate canvas upon which to display my work? I like walls that have doors and other obstacles to make the installation difficult, because once the installation is finished the viewer gets to see how architectural elements have been incorporated into the piece, to complement the work rather than it being something to be avoided.

Place. Belonging. Creation. Creativity. Justice. Celebration. Joy. These all come up in response to your work. What’s missing? 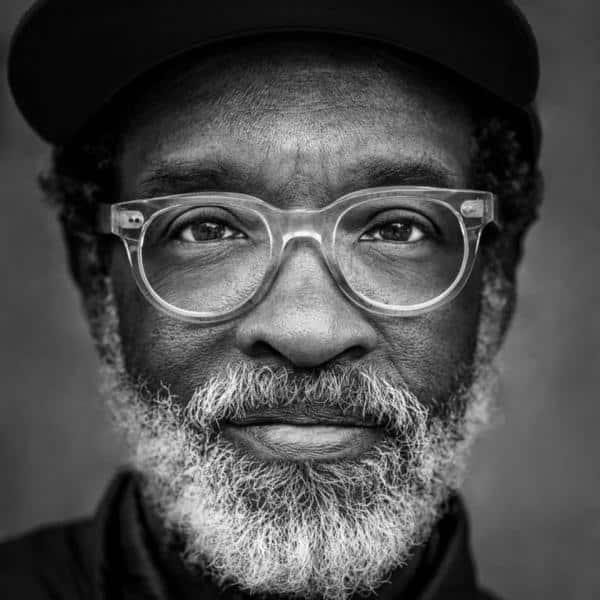