LAST MONTH, we posted a list of poetry recommendations for National Poetry Month, and the response was so positive we’ve decided to offer up more recommendations, this time in honor of Asian American and Pacific Islander Heritage Month. Orion’s poetry editor Camille Dungy and her community of writers are back with essential collections for your nightstand. 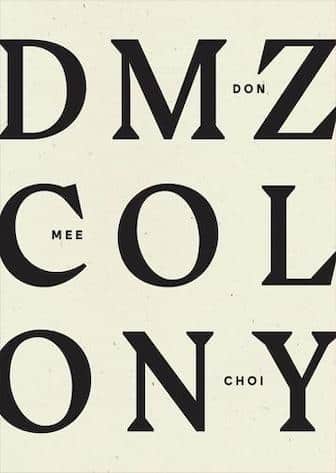 A bricolage of poetry, prose, real and imagined translations, photographs, memories, and hand-drawn overlapping circles, Don Mee Choi’s excavation of the lasting legacy of decades of war and occupation on the Korean peninsula is shot through with birds. I write of the landmass rather than the countries’ political designations because the line that differentiates the experiences of the people of North and South Korea is often muddy in Choi’s DMZ Colony (Wave Books). While she is walking in Missouri, a migration of snow geese passing overhead sets off the author’s vertigo and triggers her return to Seoul. We learn the circumstances that caused her family to have to flee—to have to, as her mother says, live “like birds”—and we read about people who could not escape, those who “had no place to land.” Choi’s 2020 National Book Award-winning DMZ Colony might not be the most obvious choice of books to recommend to Orion readers, given the fact that so much of the book is focused on very human concerns, but questions of migration, safety, and the impossibility of return are universal. Choi dedicates this book to “all the birds and children in flight,” and her work is a stirring and necessary witness to the realities of this inextricably connected world. 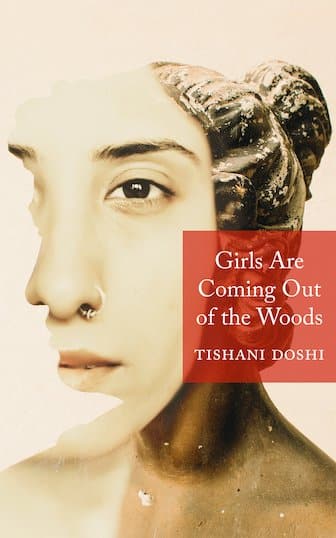 Girls Are Coming Out of the Woods by Tishani Doshi

Tishani Doshi’s Girls Are Coming Out of the Woods (Copper Canyon Press) is a haunted and haunting collection full of richly woven narratives of loss and grief and beauty and yearning. The landscapes of Doshi’s poems are so brightly imagined that I can smell their trees and see their flowers. I can hear birds calling, though I wonder, always, whether her birds are leading me to safety or to danger. These poems’ waves spit up Styrofoam and fishing lines and “orphaned slippers” as frequently as food. Their parties offer “rustling table clothes” and wine glasses and puppies and crowds of dead girls. There is humor here, a great deal of it, and horror, too. The poems are packed with the things of this world—and, I will add, they are set in many places. They can’t ignore the realities of the peril so many on this planet face, but these poems are charged by the planet’s life force. They insist on survival. (Note: Read Doshi’s Spring 2021 Orion essay, “Out of Breath.”) 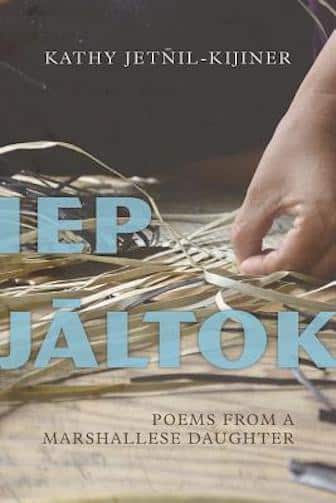 Iep Jāltok: Poems from a Marshallese Daughter by Kathy Jetn̄il-Kijner

Between 1946 and 1958, the United States detonated twenty-three nuclear weapons on Bikini Atoll in the Marshall Islands, including a hydrogen bomb called Bravo that was 1,000 times more powerful than the bomb dropped on Hiroshima. (Did you know that’s how the swimsuit got its name? When the two-piece style made its initial appearance, one fashion designer hoped the style would explode onto the scene and linked its name to the recent explosions on Bikini.) And Bikini wasn’t the only atoll used for weapons testing. During that time, sixty-seven nuclear bombs were detonated in the area, and other munitions testing was conducted as well. A 3,000-year-old culture, the Marshallese now have some of the highest rates of cancer, miscarriage, thyroid conditions, and other acute and chronic health concerns in the world. The Marshall Islands are a sovereign state, but many Marshallese, including poet and activist Kathy Jetn̄il-Kijner, live in U.S. states like Oregon, Arkansas, and Hawaii. Jetn̄il-Kijner’s Iep Jāltok: Poems from a Marshallese Daughter (University of Arizona Press) tells of growing up Marshallese in the United States and her eventual return to the islands of her lineage. The book details the ways the fallout from military occupations, mid-century weapons testing, and modern-day climate change have shaped the lives and the landscapes of the Marshallese people. The breadfruit trees and the coconuts and the reefs and the fish and the reeds and the language and songs of the Marshall Islands are at the center of these poems. Even the stones are gods. 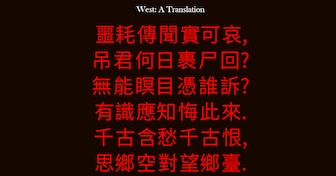 West: A Translation by Paisley Rekdal

West: A Translation is a multimedia wonder—poetry, translations, music, video, archival photographs, history lessons, facts about redwood trees, letters about the soil, and the story of building the transcontinental railroad are all here. Paisley Rekdal centers this monumental project on a poem that was written on the walls of Angel Island Immigration Station. The project links the history of the 150-year-old railroad and stories of the Central Pacific Railroad president Leland Stanford to the Chinese, Mormon, Black, and European immigrants who built it, as well as the Native people whose lives were irreparably altered by the access the railroad granted settlers who stormed the West, as Brigham Young says, “like locusts.” You can enter the website via the introductory video and hear a reading of the Angel Island elegy in Cantonese. Then click on each character in the original poem to discover a “translation” that will take you to a fresh page and experience. With each new poem, written and often read by Rekdal, discover more and more about the railroad, landscapes, and people who made the American West. 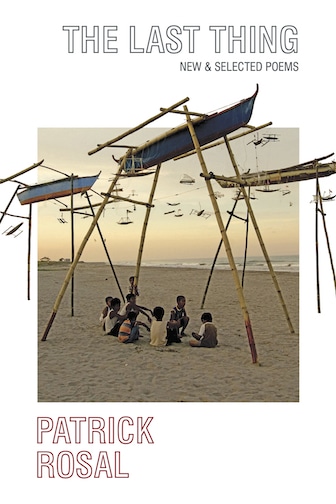 You’ll have to wait a bit for this one, but you can always place your preorder now. Poet Patrick Rosal’s The Last Thing: New & Selected Poems (Persea Books) will be published in September 2021. I had a sneak peek at this phenomenal collection, and I can promise you it’s everything I’ve been waiting for. Collecting work from Rosal’s previous four books, including the Lenore Marshall Poetry Prize-winning Brooklyn Antediluvian, this new collection contains page after page of heart-hitting (pun intended), syntax-bending, break-open poems. These pages have in them English and Spanish and Tagalog and the language of math and gardening and cooking and loving and losing and dreaming and more. Rosal’s poems are rich with the produce of hard toil and care for the land and its people. There are fields and canebreaks, hatchets and hope. These poems flood their pages with typhoons and levee breaks and, at the same time, they build bridges to help carry us safely across rough waters. It is as much of a delight to revisit the old work as it is to read the new. I hope this won’t be the last thing from Patrick. 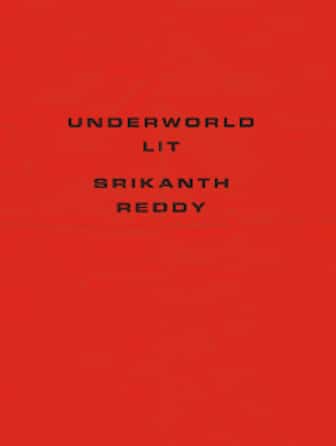 
Framed as notes for a fictitious course in the humanities, Underworld Lit (Wave Books) presents a remarkable journey into the underworld that draws on Chinese, Egyptian, and Maya sources to confront issues of corruption, colonialism, justice, and redemption in our contemporary world above. 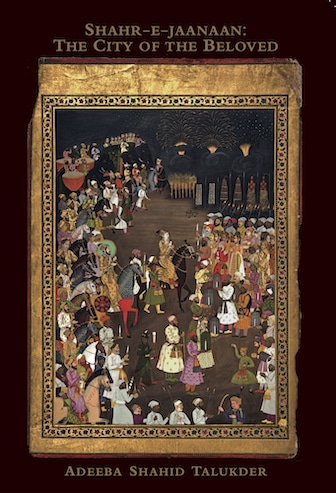 Rajiv Mohabir recommends Shahr-E-Jaanaan: The City of the Beloved by Adeeba Shahid Talukder

When I have questions about association, influence, and how to write poems that ask after the divine, I find myself returning to Shahr-E-Jaanaan: The City of the Beloved by Adeeba Shahid Talukder (Tupelo Press). The poems spiral between music and translation, rewriting a holy play between divine and human that, although rooted in Urdu literary traditions—poets like Ghalib and Faiz Ahmed Faiz feature heavily, as do stories of Laila and Majnoon—what emerges is a new environment for the speaker, haunted by the profundity of the sacred in the mundane. Translation and transformation “gleam like wine” in these poems-turned-map to “where the Beloved waits.” While grappling with traditions of two continents, these poems erupt with a new, hard-won intricacy. With each complication of identity and couplet, the speaker poses a new question: What is the distance between original and response? How can we be transformed by those who have gone before when we are looking for simple answers? “Who holds this sky today, / then tomorrow?” 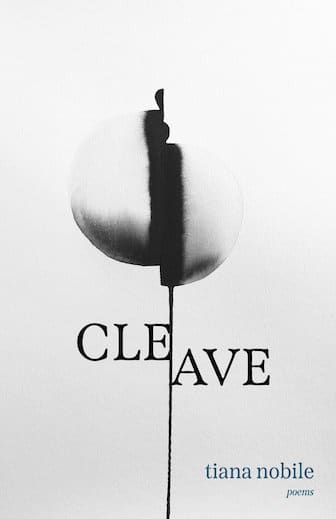 Cleave is not only the story of a transnational adoption. Because of Tiana Nobile’s compassionate imagination and lucid discernment, Cleave (Hub City Press) becomes the story of all our lost selves, of the mothers we long for and the languages we struggle to speak. Writing with what Audre Lorde calls the “intimacy of scrutiny,” Nobile uncovers in the mysteries of her origins our most difficult truths, observing “How we feed on each other for ourselves. / How we keep ourselves alive through each other.” This is an accomplished debut by a powerfully precise poet. 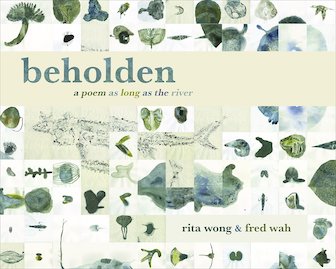 Kazim Ali recommends beholden: a poem as long as the river by Rita Wong and Fred Wah

In this epic collaboration from Talonnooks, water defender and activist Rita Wong teams up with the legendary Fred Wah to create a book-length text that engages with the endangered Columbia River watershed. Originally exhibited as a 114-foot banner of the entire Columbia River as part of the gallery exhibit River Relations: A Beholder’s Share of the Columbia River, Wong and Wah’s book reproduces both the textual and graphic elements in traditional codex format. The poets’ separate single lines of text run the length of the book (and the river) conversing with one another and the water, from source to spill. There is a concluding dialogue between the two poets. As they say, “Listen to the river and find ways to be a better relative to the river, to each other.” 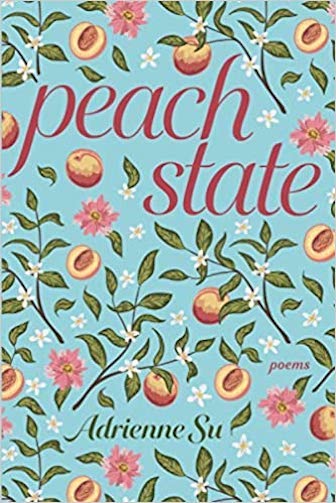 A book that crisscrosses the complicated terrains of growing up Chinese American in Atlanta, and the discovery and negotiations of what it means to find home in Asian grocery stores and restaurants. A dazzling array of forms: sestinas, ghazals, villanelles. I am teaching this one the first chance I get. No other poetry book in recent memory has made me more hungry than Peach State (University of Pittsburgh Press).