ALOVER TAKES NOTHING FOR GRANTED. A lover explores, wanders, takes delight in nuance. Says, viva la difference. A lover listens, savors, is patient. Janisse Ray is a writer in love with place and places. I see this in her newest book, her eighth, Wild Spectacle: Seeking Wonders in a World Beyond Humans (Trinity University Press, October 2021). These essays roam from Montana’s Yaak River Valley to the Nicoya Peninsula, Vermilion Cliffs to the Blue Hole, Bryce Canyon to Apalachicola Bay, with Ray as the readers’ ever-present guide.

The risk in approaching the world this way, right now, is that you keep getting your heart broken. Eastern hemlocks, killed by hemlock woolly adelgids, lay fallen in the river beside my campsite last night. Smoke from forest fires in California, three thousand miles away, darkened the Appalachian sky.

Some years ago, I hiked through a mixed hardwood forest alongside Little Brier Brook, to reach the cabin of the Walker sisters, in what people used to call Seven Sisters Cove. It’s now part of Tennessee’s Great Smoky Mountains National Park. These sisters were born in that cabin and lived there until they died, the last one, Louisa, in 1964. They were rooted there.

One day in April, I stood in the Walker cabin, dim light gloaming in through the windows, and I read the walls. They would use the pages of Successful Farming magazine to paper the walls afresh every springtime. One fragment spoke of “Your Own Particular Soil.” It had to do with planting seeds you knew would prosper in your plot of land, given your sun exposure and typical rainfall, heat and cold.

If you approach the world from a dwelling place of love, if you carry, as Ray does, a little of your own particular soil with you wherever you go, then you will see your home everywhere. This isn’t always a good thing. It will make you more homesick. It will open your heart to more grief. But you will also know, in a deep way, that every place is someone’s beloved. Bright bald of granite. Copse of chestnut oak. Moss and liverwort greening a boulder in the Middle Saluda River. I give myself away.

One summer evening, Ray and I met to talk about food, music, and love: life’s whole wild spectacle.

We start with one of my favorite topics: Which South Carolina tree are you? I’ll find out Janisse’s in three questions . . .

Joni: First, tell me about a song you love.

Janisse: “Harvest Moon,” by Neil Young. I love its moody flavor, dark and pensive. And I just love the sound of the broom sweeping back and forth.

Joni: Okay, second, tell me about a cherished possession.

Janisse: A worktable my grandfather built out of cypress wood.

Joni: And third—this one is simple, but not easy—sun or shade?

Joni: Your tree, dear Janisse, is the bald cypress. One of our two native deciduous gymnosperms, and a tree of light green needles (later rusty) that loves places of dark water. When it drops its needles, it lets in the light. 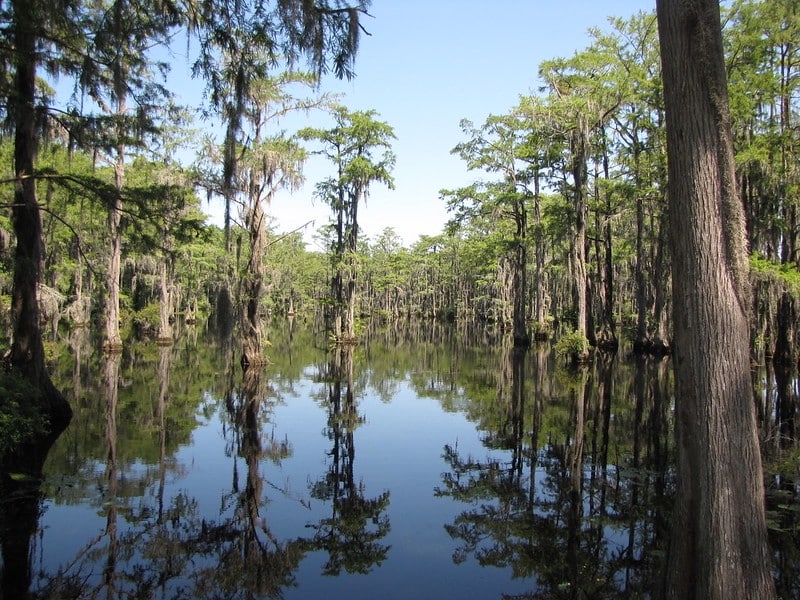 Joni: Tell me about kilometer zero in Wild Spectacle. What I mean is, point me to the place where the book began for you, its spark, its germination.

Janisse: It began with a hike Raven, my husband, and I took in the Bob Marshall Wilderness in Montana. Somehow we managed to get very close to an entire herd of elk, or actually they got close to us.

Joni: I love that moment in the book: “We were so invisible we were two spirits, crouched by a stream.” And the way in which you describe the elk is so vivid:

“An elk has a shape unlike most ungulates. It has no tail to speak of. Its head and neck are like that of a small horse, its body like a zebra’s. It has a long head and a dark neck. Its hide is a richness of browns and reds and tans, moving like prairie grass in wind. Elk hair looks not like watercolors mingled, but like oils. An elk’s body has the wet richness of an oil painting.”

Janisse: I realized how often I write about those moments, when you get to the edge of this great big wildness and you get to peep in, but you can’t enter it, not yet. There’s a borderland between this world and that world. Almost everything I write is running that borderland.

Janisse: Right away manatee leaped into my head. Then cypress. Then soil. Earth itself. But if this is a stranded-on-a-desert-island kind of question, I’ll choose a horse.

Joni: Tell me about a particularly memorable drink of water you have had.

Janisse: We’ve lost so many things with industrialization, and one of them is a good, safe, quenching drink of water right out of the bowels of the earth. Finding this is getting  harder and harder. I know a spring-fed fountain beside a mountain road in Vermont—someone built a gorgeous stone basin for it. And I know an artesian well (one of the last) on a Georgia beach. Other than those, I don’t dare drink from creeks or springs. So anything that bubbles out of the earth that I can drink, I remember.

Janisse: I’m going to say desert, because I’m in swamp all the time. And when I’m not in swamp, I’m swamped.

Joni: I love the way you write about the Okefenokee in this book. It’s the literal place, and it is also mythic. When you must save your son’s friend Zack from being poisoned, you paddle him out of the swamp as he lies in the back of his boat between life and death, and you write:

“I became something more than I’d ever been as I rowed Zack out of the primordial gunk. As I fought, I also birthed. I birthed Zack and I birthed myself. I birthed too the power of any woman to not be afraid, to not let the fear of death stop her from doing what was needed, to fight for life.

We women forget that most of the time we are warriors fighting for life—to birth it, to protect it, to care for it, to honor it, to continue it. As humans, as women, that’s the biggest job we do.”

I love that passage. It’s one of many that shimmers in my mind when I think about the book.

Janisse: This is a lot coming from someone local to the subtropics, but summer.

Joni: I get that. I would always rather be hot than cold. What is the best time of day?

Janisse: Six a.m. And it’s especially good if the sky is blowing up with pink and gold.

Joni: Something you lost that you miss.

Janisse: A chance to live on a hippie commune.

Joni: Tell me about a surprising item in your fanny pack.

Janisse: Lipstick. I know all the arguments against makeup—feminism and health and piety (the one my dad used)—but I do love it.

Joni: Tasty! Okay. You get one writer to read for the rest of your life. Who is it?

Janisse: You ask such tough questions. Is it unfair to ask for Shakespeare to be mine? (Mostly because I have avoided reading him, because I’m always reading everybody else. So Shakespeare, for better or worse.)

Joni: You’re going to a “meat and three.” For readers unfamiliar with the term, a meat and three is a genre of restaurant popular in the South, usually with a changing list of options: a couple of featured mains (e.g., fried chicken, meatloaf) and a series of sides (macaroni and cheese, pinto beans, tossed salad, banana pudding). What do you order?

Janisse: You have presented a daily quandary. What do I eat? I’ve been vegetarian, vegan raw foodist, paleo, GAPS.

Janisse: Gut and Psychology Syndrome. It’s a kind of ultra-paleo diet that utilizes a lot of bone broth, fermented foods, and vegetables. It is meant to heal the gut–brain connection and has been found to be effective in the treatment of some mental health disorders.

I think I’m finally at a happy place with food. At your diner, I’m probably not going to be able to order a meat, because I try not to eat industrial meat. We grow at least half our own food, maybe more, including meat. So let me put in an order at home. I’ll take tenderloin, rosemary mashed potatoes, sautéed garlic scapes, and a salad with whatever’s in the garden. Salad snobs think there’s a certain way to do a salad, but I believe you take a bowl to the garden and you throw in it whatever you can find, the more variety the better. Joni, can I order dessert, too?

Joni: Of course you can.

Janisse: Pavlova, with raspberries and strawberries.

“If we eat from a place, don’t we become the place? Isn’t eating a direct way of filling ourselves with a place we love, of making it a part of us, of becoming it? If we eat wild food, can’t we become wild? Can’t wild food get us closer to the heart of wildness?”

There is hope in that, too, in the food given and shared with community. You write, “After that, I trusted the world more. I had seen what I had seen. If wild plenitude still existed somewhere, then it was not a myth, and it could exist anywhere, again.”

Do you still believe that?

Janisse: I believe that there are places that still offer greater nourishment than others, and this is a factor of wildness or wholeness, meaning less fragmentation. I also know that atmospheric threats like glyphosate, climate disasters, and nitrogen from fertilizers are ubiquitous, and that no corner of the earth is left untouched by them.

Joni: One of my favorite moments in the book involves your description of a compelling, complex man, and the place in which your lives intersect—the wild Pacific coast of Costa Rica:

“‘My god,’ he yelled into the heavens. ‘My god.’ He whirled toward me. ‘This is my god.’ Suddenly he went down onto his bare knees in the brown sand, kneeling in frothing surf, long hair clinging to him like bark. ‘This is my religion,’ he said.”

Is it too much to ask you about what you see as your connection to the spiritual world?

Janisse: I believe that another world exists inside the one in which we live, and it is mostly invisible to us. But it’s there. And I no longer think that death is a dead end.

Joni: I’m thinking now about your manatee essay, and about your Okefenokee essay, too. If you love something, whether manatee or boy or little spiders in a Mississippi cemetery, you fight to protect it. It gets back to love.

Last question: What do you want people to remember about you as a writer (in five words)?

Janisse: I am not joking around.