Photographer: Jasper Doest. During a blizzard in Joshin’etsukogen National Park, on the island of Honshu, a Japanese macaque shakes off snow and water drops while resting on a rock that’s poking out of a hot spring. “For a year I obsessed about the wind swirling over the famous hot springs within the park. It resulted in this photo of a Japanese macaque that seems to fly through the galaxy on a magic carpet.”

ONE HUNDRED TOP PHOTOGRAPHERS have come together to offer an extraordinary selection of 200 fine art prints, including over fifty highly sought-after limited edition prints, to raise awareness and much needed funding for conservation efforts around the world. The initiative is called Vital Impacts and its mission is to support organizations working to protect endangered habitats for humans and wildlife and the storytellers who amplify these critical stories. 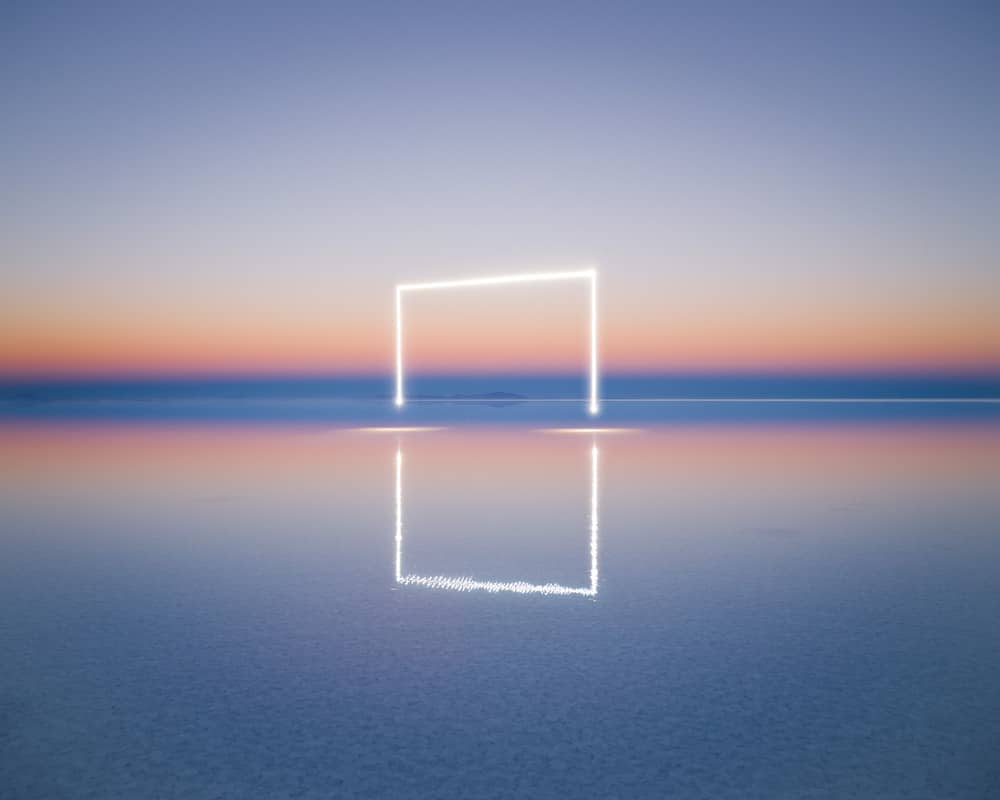 Photographer: Reuben Wu. “Field of Infinity XT2011.” A continuation of his Lux Noctis and Aeroglyphs series, Reuben explored the landscapes of Bolivia on a weeklong road trip, photographing in remote and extreme locations, in combination with his modified drone to illuminate the landscapes at night. Reuben Wu is a visual artist and music producer. He is also a co-founder of Ladytron and an official ambassador for Phase One Photography. 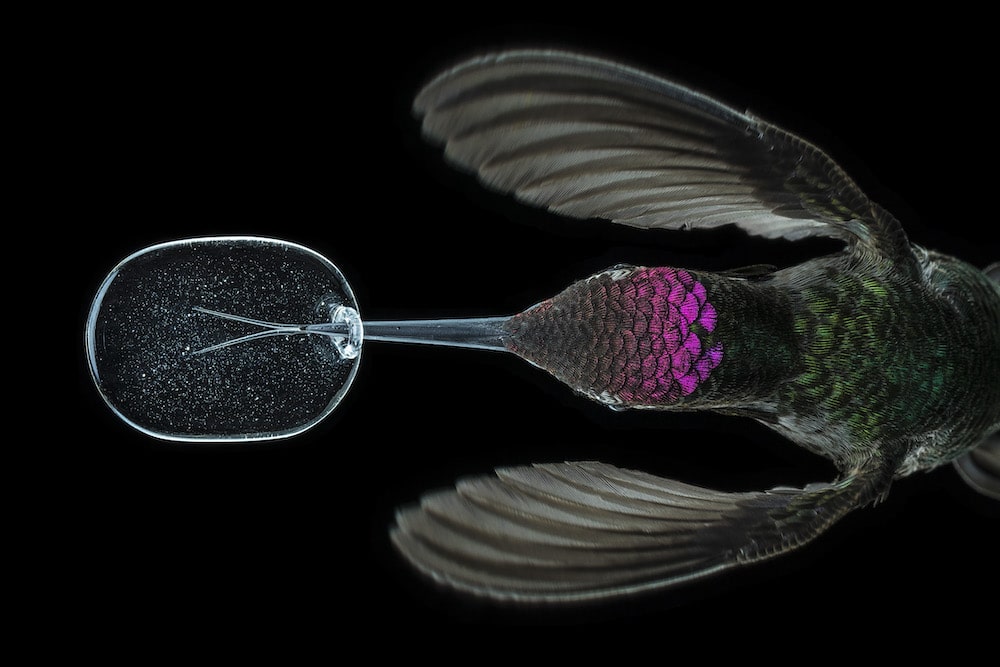 Photographer: Anand Varma. The forked tongue of this Anna’s hummingbird can be seen through the glass vessel from which it’s drinking artificial nectar. To fuel their energetic flight, hummingbirds may consume more than the equivalent of their body weight in nectar each day, via a tongue that makes a sipping motion up to fifteen times a second. To keep the birds healthy in captivity, the artificial nectar they’re fed contains protein powder and other nutrients, seen here as white specks. Anand Varma is a National Geographic Explorer and award-winning photographer based in Berkeley, California. 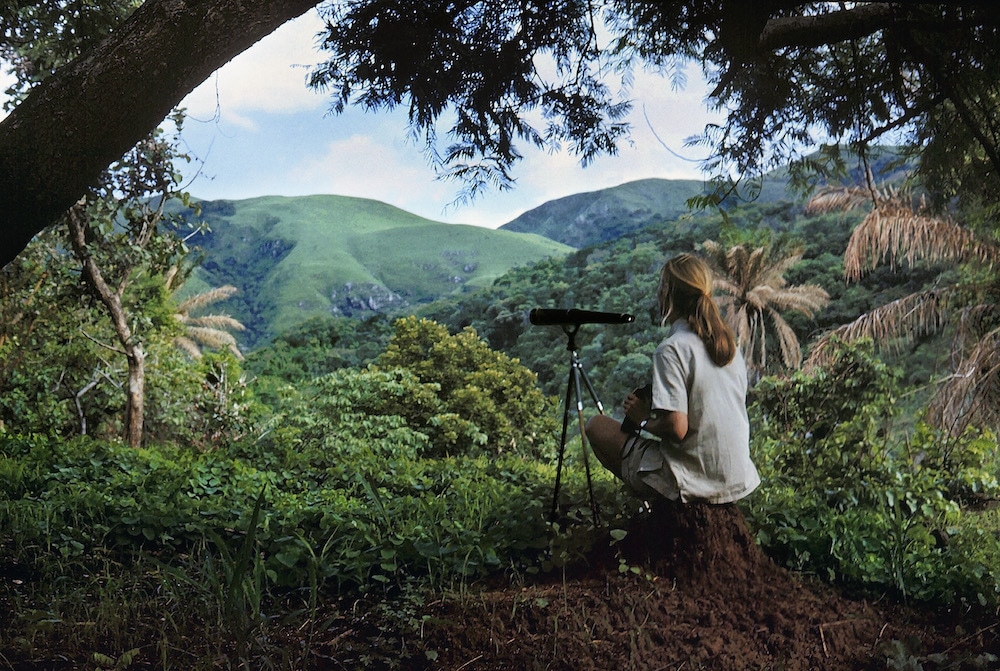 Photographer: Jane Goodall. In her early days at Gombe, Dr. Jane Goodall spent many hours sitting on a high peak with binoculars or a telescope, searching the forest below for chimpanzees. She took this photo of herself with a camera fastened to a tree branch. “I was really excited to see that that photo of me looking out at the valley at Gombe with my trusty lightweight telescope was chosen. It was taken in, I think, 1962. I was on my own, very high up in the hills and I thought what a great photo this would make.”

“I had to find a place where there was a tree that was just right for balancing the camera. I had to set up the tripod and fiddle about until I had the tripod and the imagined image of me framed just right. That was in the days before digital so I had to wait a long time before I got the results back from National Geographic. I was pretty proud of myself. I love that picture.”

The photographers who have been selected for this collection are renowned for their dedication to the planet. They have demonstrated a deep commitment to conservation efforts around the globe and are donating to support the grassroots conservation campaigns: Big Life Foundation, Jane Goodall Institute’s Roots and Shoots program, Great Plains Conservation Project Ranger and SeaLegacy.

Dr. Jane Goodall DBE, the world’s foremost expert on chimpanzees and conservation hero to many, has contributed exclusive, signed prints from her time working in Gombe, Tanzania, sixty years ago. These newly available images include a self-portrait, as well as two other images showing the remarkable lives of chimpanzees she has been working to protect for sixty years. 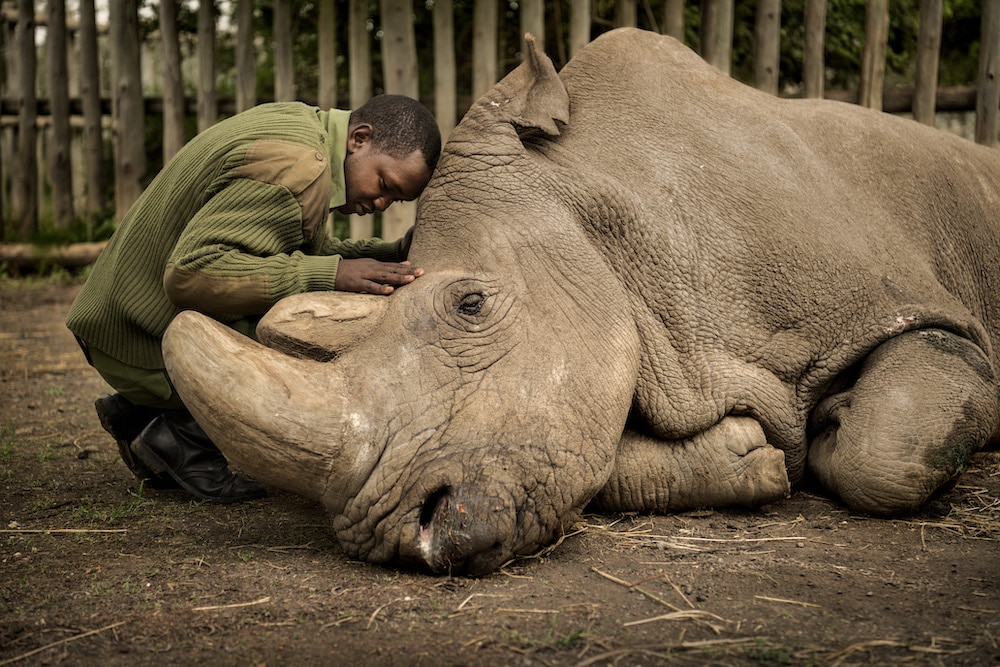 Photographer: Ami Vitale. Edition: 5 of 50. Joseph Wachira comforts Sudan, the last living northern white rhino on the planet, moments before his death on March 19, 2018 at Ol Pejeta Conservancy in northern Kenya. He died surrounded by love, together with the people who committed their lives to protecting him. From the moment I heard about the bold plan to airlift four of the last northern white rhinos from Safari Park Dvör Karlove Zoo in the Czech Republic back to Africa in 2009, until today, when Najin and Fatu, his daughter and granddaughter, are the last two remaining of their kind, this story has shaped the lives of countless dedicated keepers, scientists, and conservationists.

“I believe this moment can be a catalyst to awaken humanity to the reality of the losses we face and inspire action. In a hopeful twist, scientists from The Biorescue Project have already created twelve pure northern white rhino embryos which are awaiting implantation in a southern white rhino surrogate.”

For the past twenty-five years, I have been reporting on stories about humanity’s impacts on the planet for publications like National Geographic, among many others. Human activity has placed one million plant and animal species in immediate danger of extinction, causing what scientists have identified as the sixth major extinction event on this planet. This extinction event is different—not only is it driven by humans but it is happening at an incredibly fast and accelerating rate. Removal of a keystone species has a huge effect on the ecosystem and impacts all of us. These giants are part of a complex world created over millions of years, and their survival is intertwined with our own survival. Without wildlife, we suffer more than just the loss of ecosystem health. We suffer a loss of imagination, a loss of wonder, a loss of beautiful possibilities.

What happens next is in all of our hands. Nature is resilient if we give it a chance—if we give it our time. We all have the capacity to get engaged and use our voices to make a difference. Each of us will be a much more powerful voice when speaking to the people in our lives. I believe we must first fall in love with the world around us. Love gives us the courage to make a difference. But I know it’s not just about loving this planet. In fact, that’s not going to save us.

What’s going to save us is believing in the wonder of this world. Wonder allows us to get beyond routine ways of thinking and to reimagine our future together. Wonder shows us how deeply connected we are to one another and that our choices are profound in their impact. We all want to be on the right side of history, and that can only happen when we realize that history is our story and our story is the story of every living thing on this planet. We must not fall into the trap of thinking that this issue is too big to deal with or that someone else will take care of it. It is up to you. It is up to me. It is up to us. 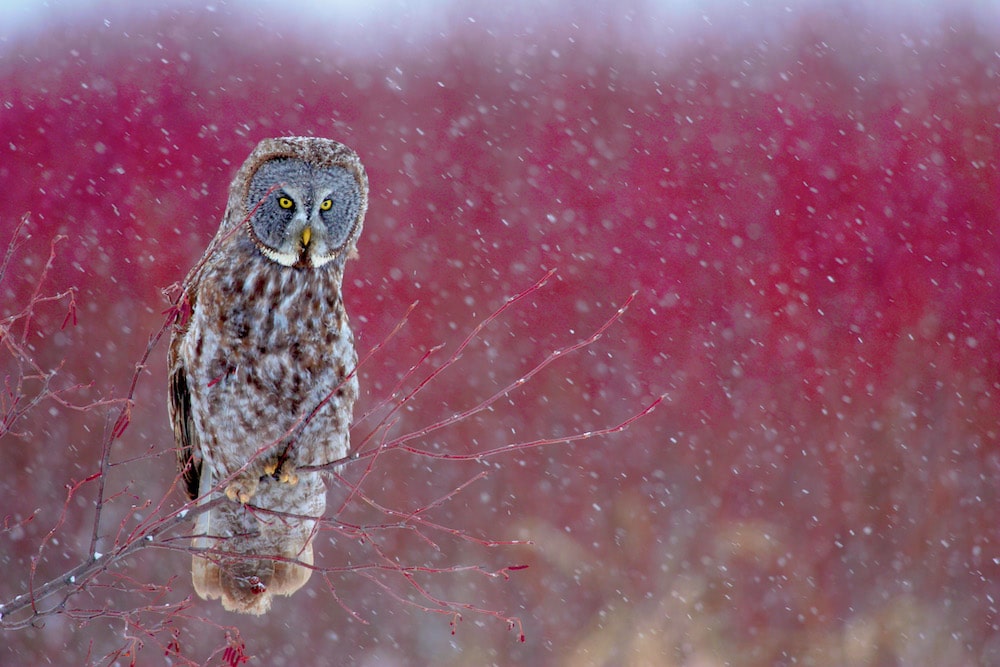 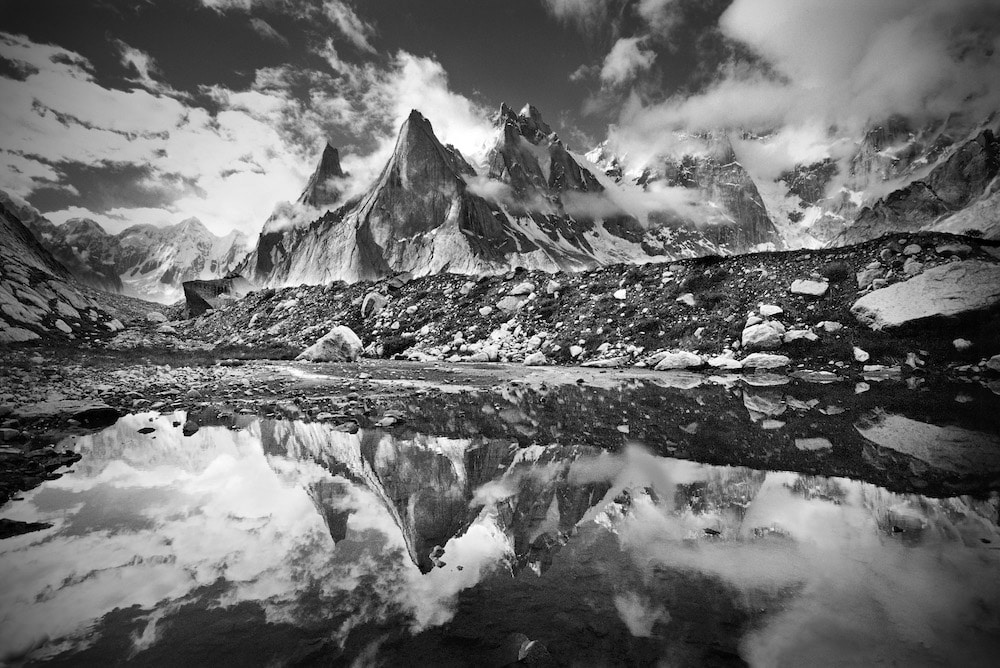 Photography has the unique ability to transcend all languages and help us understand our deep connections to one another and to all of life on this planet. It is the ultimate tool for creating empathy, awareness, and understanding across cultures, a tool for making sense of our commonalities in the world we share.

The genesis of this initiative is to use photography and powerful storytelling images to support organizations working to protect endangered habitats and amplify these critical stories. This is a moment to reimagine our relationship with nature and to one another. We all need to do all we can to care for the plants and critters that inhabit Earth. They are fellow travelers in this universe. Our future happiness depends on them. 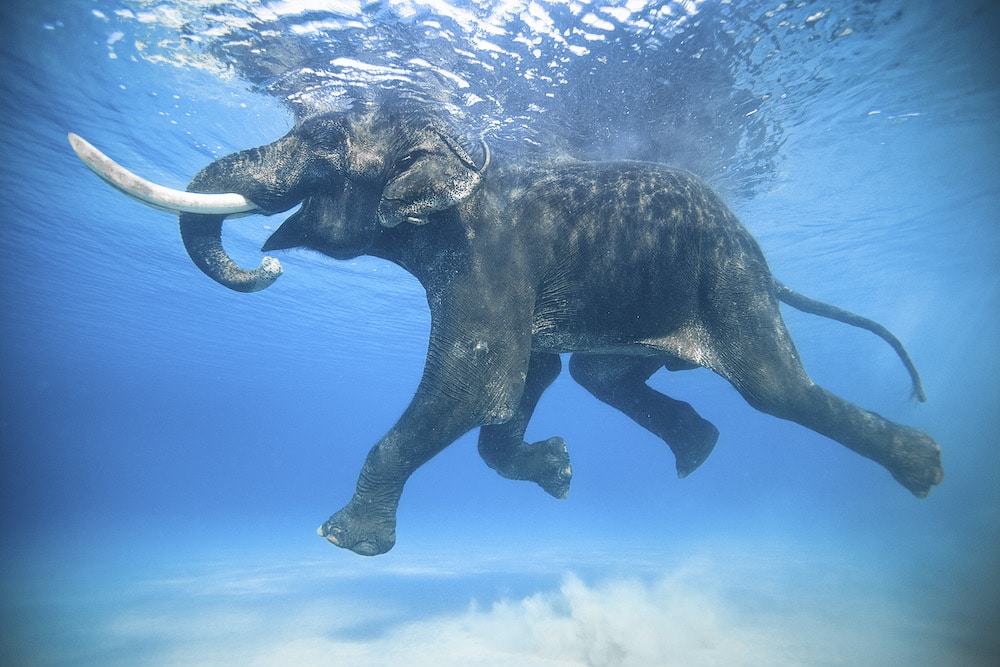 Photographer: Jody MacDonald. “This is Rajan. He is a sixty-six-year-old Asian elephant brought to the Andaman Islands for logging in the 1950s. He and a small group of ten elephants were forced to learn how to swim in the ocean to help bring the logged trees to nearby barges and then eventually swim onto the next island. When logging was banned in 2002, Rajan was out of a job. He spent the rest of his days living out an idyllic elephant retirement on one of the islands he helped log. I photographed him and his Majout (caretaker) named Nazroo, who had been with him for thirty years, and documented Rajan spending time sunbathing on the beach, swimming in the ocean and foraging in the forest. Rajan was the last of the group to survive until his death in 2016. He was truly the last of his kind. This image is from the artist series ‘The Last of His Kind.'” An award-winning photographer, Jody MacDonald is no stranger to adventure and exploration in the last untamed corners of the planet. 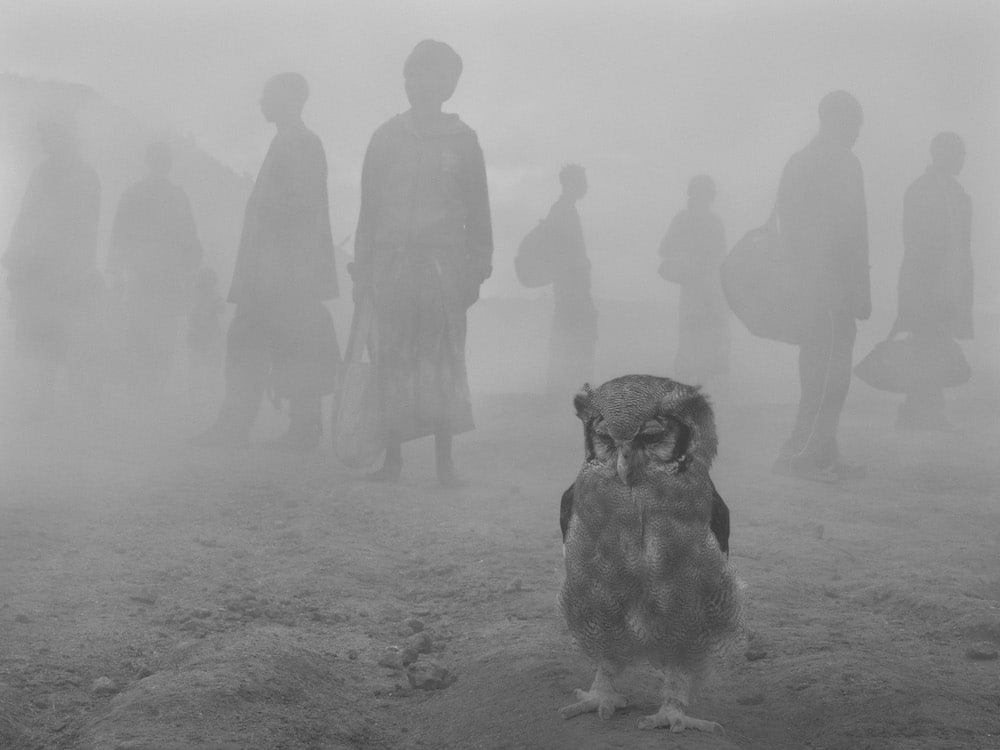 Photographer: Nick Brandt. Harriet, a giant eagle owl, has lived at Kuimba Shiri Bird Sanctuary for thirty-five years, rescued when she was a chick as a result of deforestation. This image is the first part of a global series, The Day May Break, portraying people and animals that have been impacted by environmental degradation and destruction. The people in the photos have all been badly affected by climate change—some displaced by cyclones that destroyed their homes, others such as farmers displaced and impoverished by years-long severe droughts. The fog is the unifying visual. We increasingly find ourselves in a kind of limbo, a natural world now fading from view. Created by fog machines on location, the fog is also an echo of the suffocating smoke from wildfires, intensified by climate change, devastating so much of the planet. However, in spite of their loss, these people and animals are the survivors. And therein lies possibility and hope. These animals can never be released back into the wild. As a result, they are habituated. So the animals and people were photographed together in the same frame. 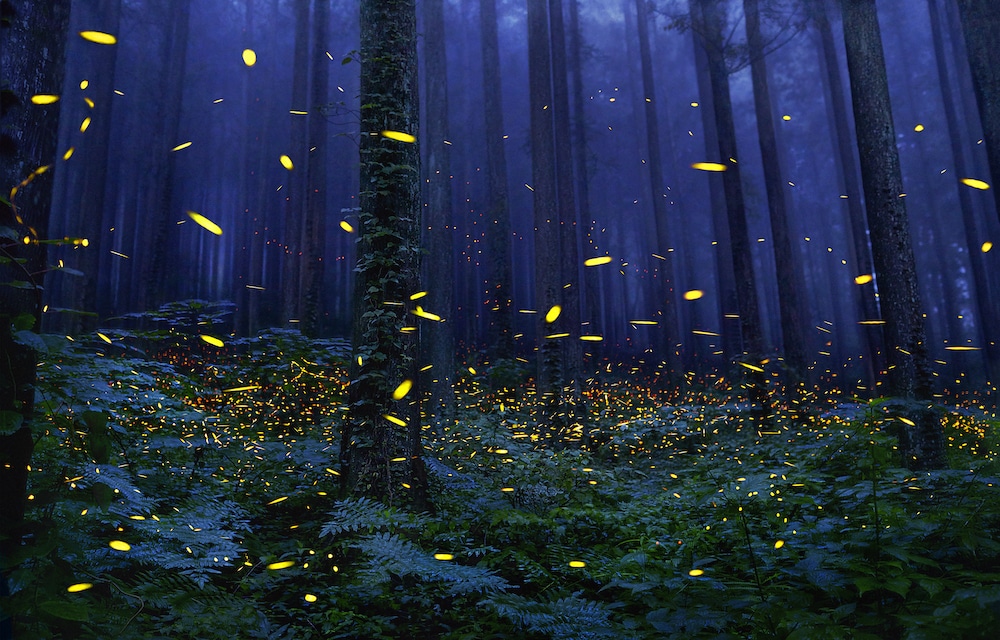 Photographer: Tim Flach. Best known for his stylized portraits of animals, Tim Flach is known for the originality he brings to capturing animal behavior and characteristics.

Vital Impacts is minimizing environmental impact by offsetting emissions. The printing, shipping, ordering system, and web platform for the sale are all carbon neutral. Click here to learn more.