I HAD TO GO INTO THE OLD FOREST seventy times before I heard it speak, and then it was only one word, urgency. Each time, I had been listening, hoping I’d hear something, as I walked carefully across the rotting spines of fallen giants, which lay in dizzying geometries atop older fallen giants, which lay upon other now buried giants—still holding their carbon, deep down into the earth, deep down into history, and yet still in service to the living—a sarcophagus of the ancient forest. No place for bulldozers.

Emerald mosses bejewel the old wood carcasses, and when you step even lightly upon them, clean water oozes out. The forest is continuously sinking in on itself, continuously lifting itself up, giant old trees rising from it and then falling like towering waves far out at sea, seen by no one, but absorbing, here on the Canada–Montana border. 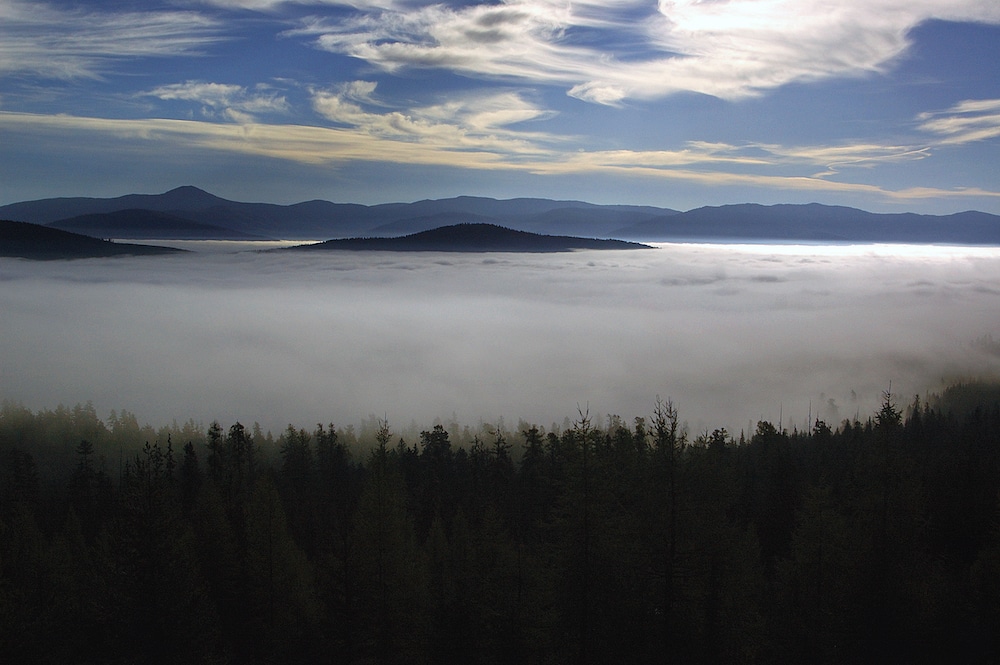 In the manner of a researcher who eventually becomes accepted, or at least tolerated, by her subjects (imagine gorillas, or bears) to the point where they go about their daily business, paying her no mind—I began to fall asleep in this old forest. It took me a long time to get to that point. I’m a geologist, wildlife biologist, and a continuing student of conservation biology, but here I will step back from science, for that has been largely, if puzzlingly, ineffective.

When the life of a loved one is on the line, who among us does not pray? As Merwin says in his poem “Berryman”—

So, I kneel, then lie on my back, looking up. I do not dream. Instead, I merely sink into the sarcophagus of all that ever was, in this cold frost pocket of a valley. I fall, tumbling through the centuries, caught and supported by the arms of hemlock, fronds of cedars. I become, in my ten-minute nap, one of the rotting bodies myself.

When I sleep, I am not aware of the threat of doom. The thousand-year-old forest that well may not live to be 1,001. All of it, obliterated, shattered, bombed.

The fuse has been lit. The fuse is burning. The government, under the previous administration, but abetted yet by the current one, says it’s time for this thousand-year-old forest to become “resilient.” Says that logging it down to dust—effectively, a thousand-acre clearcut—is the way to teach it resilience. They’ve named this proposed project, this fever dream, a remnant zombie from the previous reign, “Black Ram.”

I fall, tumbling through the centuries, caught and supported by the arms of hemlock, fronds of cedars. I become, in my ten-minute nap, one of the rotting bodies myself.

When a forest gets to be this old and untouched, it becomes something more than a forest. It becomes what we would think of as a mind, with history, knowledge, memory, and foresight. It has a pulse, and a spirit incomprehensible to us—but we can feel it when we’re in its presence. There aren’t many like this one left. Maybe none in Montana. Regional minor timber barons and public servants in the Forest Service’s timber shop will scoff at such an idea, but when you step into this ancient garden, you feel not just all that is above, but also so much of what lies below. It’s humbling, recognizing that, though we may be in the middle, we are not the center. Through the phenomenon of gap creation, the forest is in perfect balance, growing and rotting. Never burning. Though rot, of course, is but a slow gentle fire of its own. The circular amid the linear rot, the ancient geometry of the disassembly building a nest that is, before our eyes and all the other senses, a miracle of reassembly. Life, lived slowly; life, lived so large.

I will not tell you that the old and mature forests store 70 percent more carbon than do the monoculture plantations planned for these public lands. I will tell you instead that I can no longer go into this old forest without falling asleep. Maybe in that fashion the universe is, even now, seeking to balance itself, as it used to do once upon a time, before we broke so very many things. Maybe my sleeping creates a space for someone else to wake up. Please, God, let that person be the current president, himself but a grain of sand and gnat-blink to this forest, and to time. 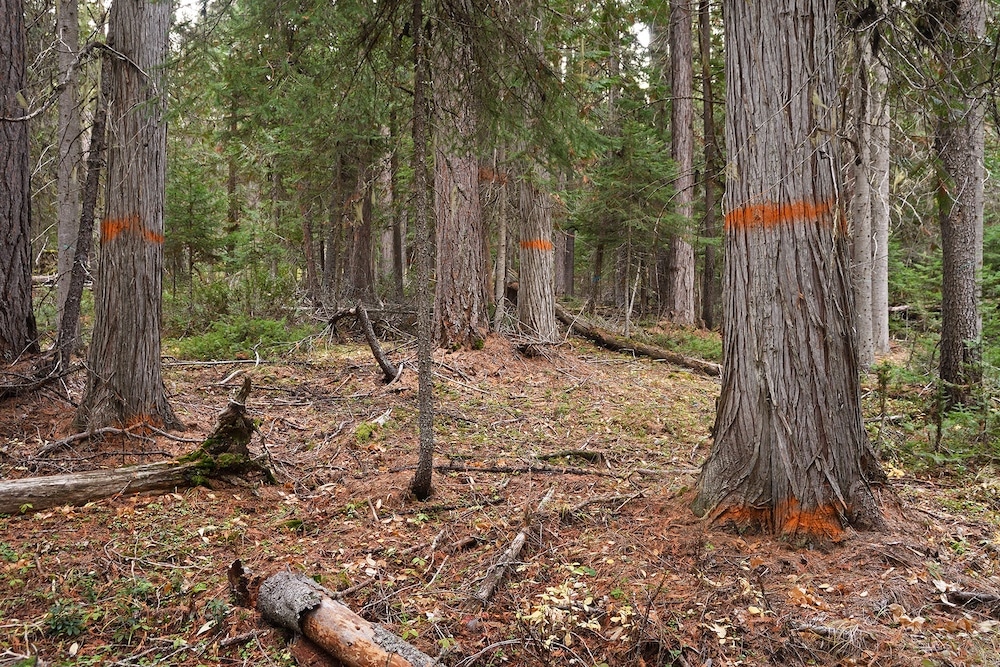 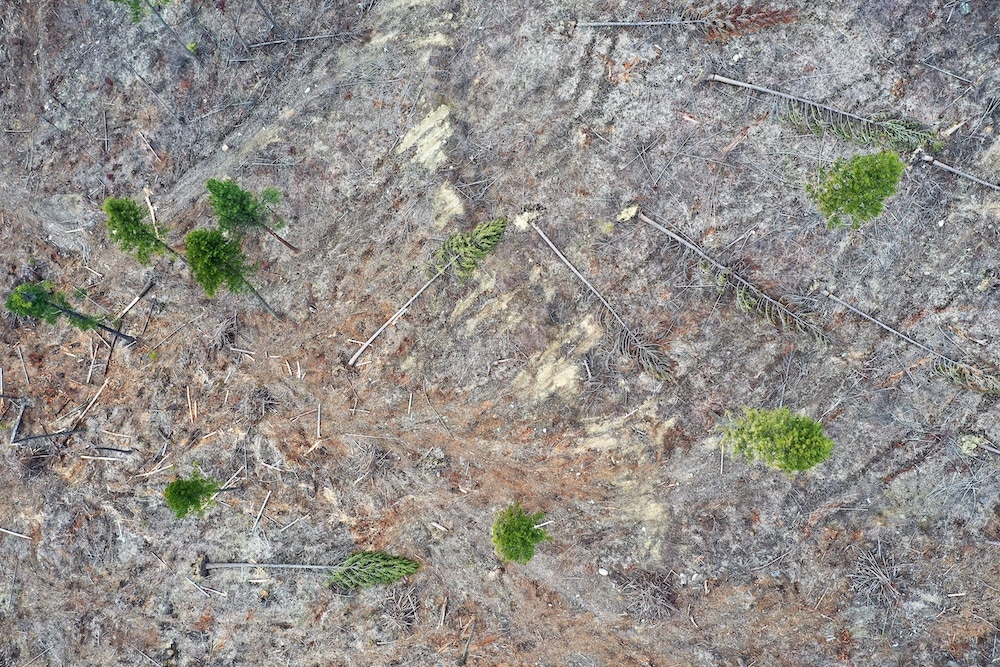 The previous administration, in the summer of 2018, built a 200-foot-wide road they called a “fire line,” the year after they first proposed the massacre, hidden on the Canadian border. There was a little four-thousand-acre fire up high, in the rocks, some miles distant and moving away. Climbing, as fires do, and moving slowly north and west, as they do. Creeping into Canada’s swamps, where it quickly petered out.

But all summer, the United States Forest Service bladed this road into the ancient forest that was the target of Black Ram. I think of it as Montana’s first forest; it’s a primary forest—never burned and never logged. If science were still revered in this country, it would possess what scientists call baseline data. But we are not going to talk about science here. Science went away in the previous administration, and we are waiting to see to what extent the current one will bring it back. We’re still waiting.

The USFS logged many of the old trees in the way of the fire line, gashed artesian springs, and drove bulldozers through blackwater ponds seething with frogs and boreal toad tadpoles and salamanders. A straight line of bright light and heat and wind delivered straight to the edge of the old forest.

A fuse was lit. How ironic that they said they were worried about a fire.

When a forest gets to be this old and untouched, it becomes something more than a forest. It becomes what we would think of as a mind, with history, knowledge, memory, and foresight.

Before such annihilation, I will not present here the science of ancient life and complex, sophisticated systems we don’t yet completely understand. The billions of miles of mycelium snaking underground a primary forest like this one, completely unmarred: the terrestrial world’s most powerful and mysterious communications system.

To lie on a bed of ancient carcasses that are thrumming, communicating, while you sleep, is to know a different world than the one you were told existed. Were told did not exist.

Know that we will fight for this forest with everything we have. 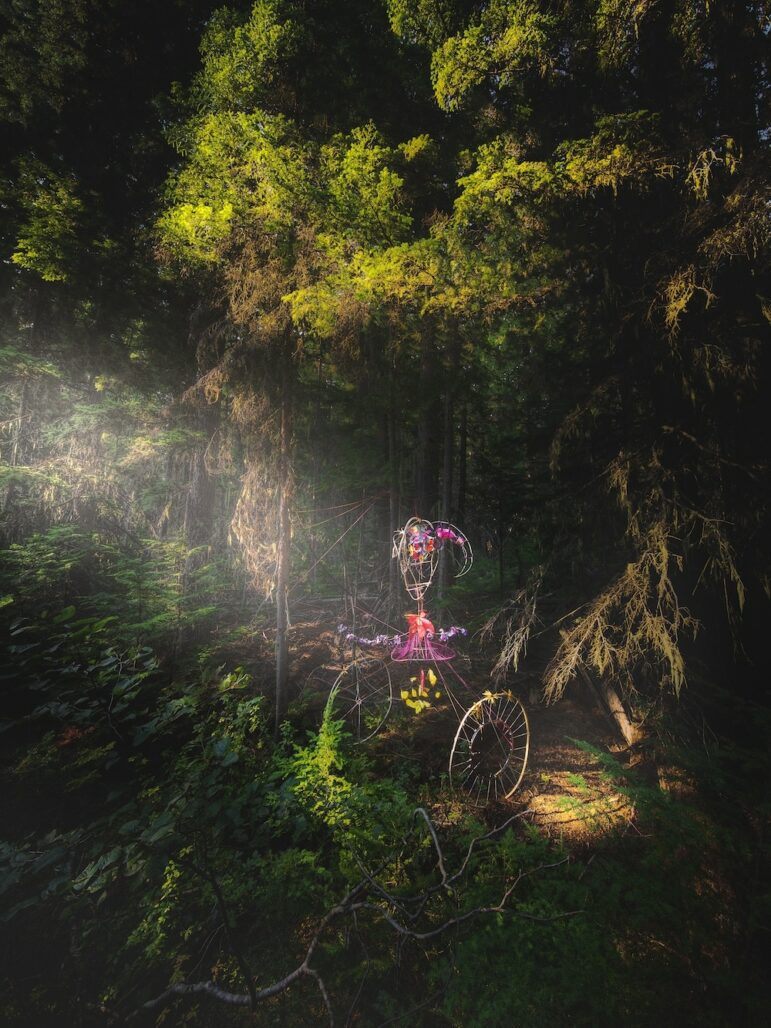 What I will tell you is that a poet began dreaming a puppet, part human, part ram. She began weaving it in a garden in New York City, brought it all the way to Montana—an offering—a flash of time amid ancient beauty. She carried a creation made by members of New York’s disability and arts community, who sent it on its voyage with hope and strength, to hang for a day and be photographed, sung to, slept beneath, before disassembling it. As if the puppet itself was a thousand-year-old creation destined to live in the forest but a single day.

More artists are coming. They are as numerous as the trees in this old forest. More poets, more sculptors, dancers, writers, bookbinders; musicians, too; a puppet-maker. More dreamers. And scientists. They will come. They will be drawn to its mystery—if only we can hold on to it a bit longer.

In these possibly last days, or possibly first days, I will not tell you how many tons of carbon per acre the old and mature forests absorb. Know that it is a lot. That data and science are out there.

What I will tell you is that finally there came a day when I went into the old forest, despite it being a place of strife, conflict, beauty, and war for me, that I, and everyone else, lay down and fell asleep and knew peace. And a thousand years rushed by, as if in a single breath, single thought.