Camille Dungy and poet friends are back with another list of stellar recommended reading. From new titles to seminal classics, you’ll want to check out these environmentally-engaged poetry collections by Black poets today, and every day. 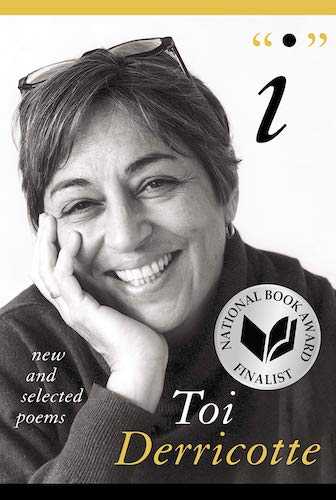 “i”: new and selected poems by Toi Derricotte

Reading “i” is like sitting next to a woman I’ve known for years, have loved for years, and love even more in this moment. I am ever grateful she trusts me enough to whisper secrets she’s never told anyone, sometimes not even herself. Everyone seems familiar to the “i” of these poems. Even the palmetto bug, who terrifies her but who she will not kill, and who returns with a larger brood, not to terrorize the poem’s speaker, but to sing her a song. In this new and selected collection, Derricotte writes with her characteristic candor and grace. And Telly! Telly! Telly the goldfish, “his swishy tail a magisterial emblem/ of the Living God.” The “i” of these poems is not afraid to love a goldfish, not afraid to write that love into poems full of trusting sincerity and deep connection. She knocks me out every time. (Pitt Poetry Series) 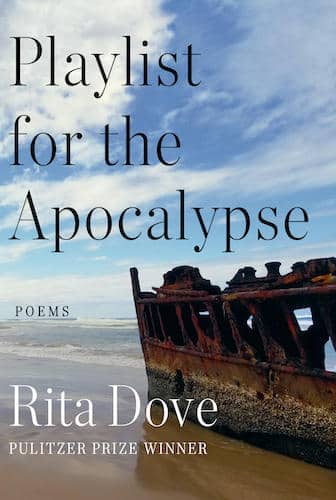 Playlist for the Apocalypse by Rita Dove


Rita Dove’s first book of new poems in over a decade, Playlist for the Apocalypse is as beautiful and insistent as a cricket song. She writes of the Venetian island covered in foundry slag and made the first ghetto. A cloud of yellow butterflies a girl who will never return thinks of when she recalls home. A river. A blue sky. Chronic illness. Everyday horrors and everyday hope. Her formal dexterity and wide-ranging historical knowledge always dazzle, yet Dove writes in such a way that even the most rigid forms and difficult stories feel plain-spoken, down to earth. (W.W. Norton) 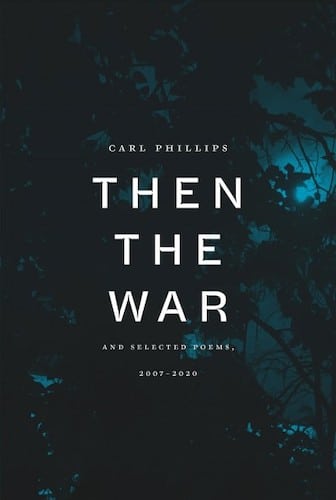 I think of the word “incandescent” when I think of poetry by Carl Phillips. Something that gives off light via its own heat. As if the intensity of passion in his language lights the page. The eye Phillips casts on the human- and greater-than-human-world is brightly alert. An eye that seems directly connected to his ear. His language is vibrant, reverent, and sonically rich. Sometimes it’s playful, sometimes it’s reverent. It’s always wholly alive. What a wonderful thing to have so many new poems from Carl Phillips. As well as many of my favorites from the last decades, arranged in tighter, bolder constellations so they appear hot and bright. (Farrar, Straus, and Giroux) 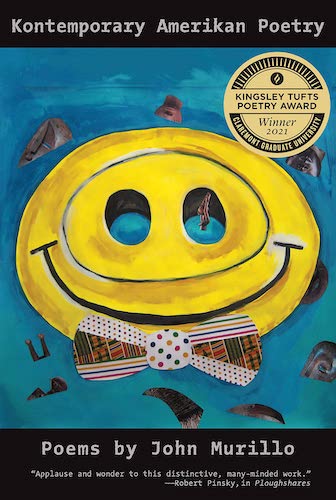 Sometimes, in the midst of one of his intense, politically charged, compelling narratives, John Murillo stops. Not to smell the roses. That would be too simple, too expected, and there is nothing simple or easy to anticipate in Kontemporary Amerikan Poetry. But there are birds sometimes, swooping down in a way that cannot be ignored. Swarming off a page scrawled in grief. And there are broken-necked flowers and well-tended ones, too. Beauty and hurt Murillo carries into his poems, like flowers meant for a lover. Or for a grave. (Four Way Books) 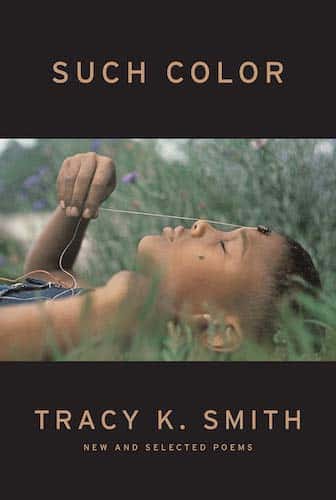 Such Color: New and Selected Poems by Tracy K. Smith

Smith’s work has long been steeped in concern for the environment. Poems from her first 2003 collection, such as “Drought,” “Mangoes” and “Wintering,” were already conscious of the interplay between the human and non-human worlds, and by the time she published her 2007 collection, Smith’s “Words/ whittled and stretched into meaning.” Her 2018 book centers the toxicity of our environmental catastrophe at its core. And new poems in Such Color clarify that, for Smith, who has always attended to interplays between history, the present, and our threatened environments, “The Wave after Wave is One Wave Never Tiring.” (Graywolf) 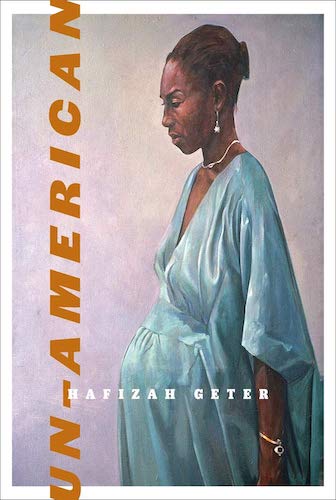 In this stunning debut collection, Hafizah Geter “demonstrates how/ what’s uprooted can return/ to solid ground.” But what’s found in the soil is just as likely to be grief as relief. Even before the mother at the center of this book dies, she is already gone, and so we pass through these pages mourning alongside the family Geter describes. “In the Ohio dark,” Geter writes, “coyotes nuzzled the neck of a swan,” as if horror and beauty are always this closely aligned. (Wesleyan University Press) 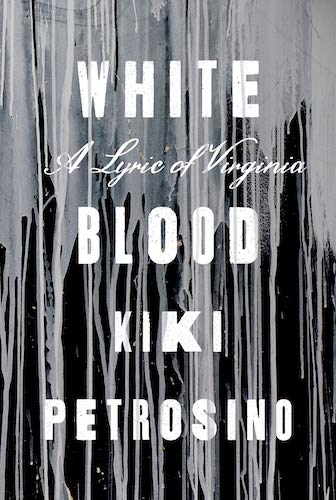 White Blood: A Lyric of Virginia by Kiki Petrosino

It would be folly to overlook Kiki Petrosino’s White Blood: A Lyric of Virginia on a list of environmentally-focused books. I can’t read about the landscape of Virginia and the Upper South (which Petrosino vividly describes) and not think about the blood and sweat soaked into that soil. Petrosino’s exacting eye challenges reductive and redacted narratives of her native place. In this wondrously innovative collection, she renews understandings about what has grown up from that land. (Sarabande) 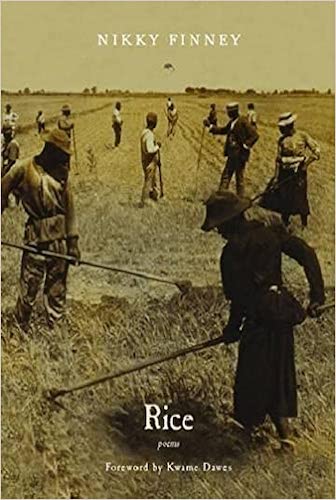 One of the important environmental books of poetry that needs further study and discussion is Nikky Finney’s Rice. Through poems and family photographs, Finney brings to the fore the important contributions of enslaved Africans to the coastal region of South Carolina. The tradition of planting and harvesting rice becomes allegory and lens by which to explore the cultivation of Carolina’s gold crop, but also the emergence of the Gullah culture of the Sea Islands and the spirit of resistance as embodied by her ancestors. (Triquarterly Books) 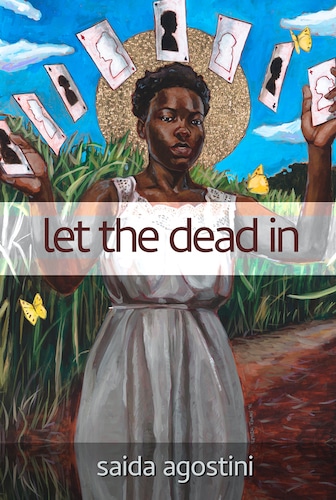 Guyana becomes a presence, its landscape a character, in Saida Agostini’s Let the Dead In.  These poems explore the murky mermaid-infested waters of the Pomeroon River, the abundant lilies, and other flora that blossom in its wake. To read this mythologically-driven poetry is to step into a lush environment and come out soaked to the skin. A good science-fiction book succeeds because of firm world-building and in this collection, Agostini crafts a world where the dead talk and we listen. (Alan Squire Press) 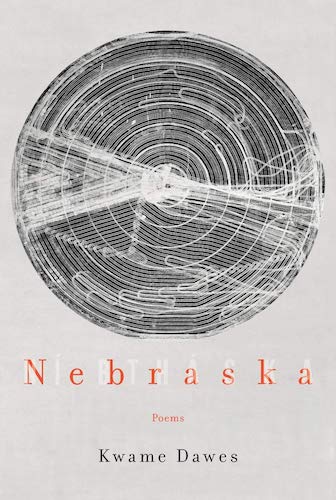 “I limp out just after the delicate chaos / of flurries covers the driveway and I shovel…” Kwame Dawes writes in Nebraska: Poems, his 21st collection, which often features the Ghanaian poet, inhabiting midwestern spaces and sensibilities. He shovels his driveway, walks his dog among geese, and draws his hand over a lavender plant, all while taking in the people who move among him. The verses here have a meditative charm that is wistful at times but straightforward like the landscape Dawes now calls home. “…There is a heaviness / that comes with being a stranger…” he notes in “The Messiness of Place,” eventually arriving at an attunement that could only result from an intimate connection to the land — not land as a place, land as a practice. The skills Dawes has acquired in a lifetime of noticing and being present seem so endemic to who he is that they travel with him wherever he goes. “I read the sky, the chase and swirl, the deep / hues and light filigree of wispy clouds, and soon / I could predict the arrival of storm…” And he was right, a storm has come to America. In Nebraska, Dawes takes it all in as though he’s seeing it for the first time, but he is too wise and self-aware, too knowledgeable of history to claim he’s witnessing in new ways or through a different lens, though he knows it may be perceived that way by some. His efforts allow us to observe his setting plainly and directly, for what it is, for what it might have been, for what it can be. (University of Nebraska Press) 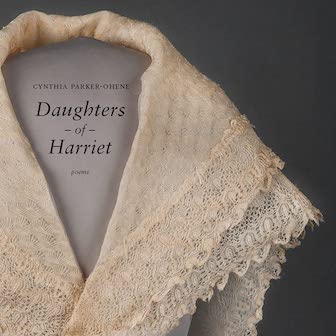 Daughters of Harriet is an ecstatic debut, and I’m ecstatic about it. In poems full of oracular fire, Cynthia Parker-Ohene proclaims the beauty of Black life across complex terrains of time and space. These intimate, yet wide-ranging lyrics move with virtuosity from the remembered “sheen of buttercups” in a beloved grandparent’s garden to the “disturbed wavelets” of the Middle Passage still resonating, as collective memory, in the Black body. This a work of deep remembrance and song-craft, drawing innovative poetic language from the luminous, multidimensional network of Black consciousness. I find something new to cherish whenever I turn these pages. Richly textured and keenly observed, this is poetry to keep close. (Center for Literary Publishing) 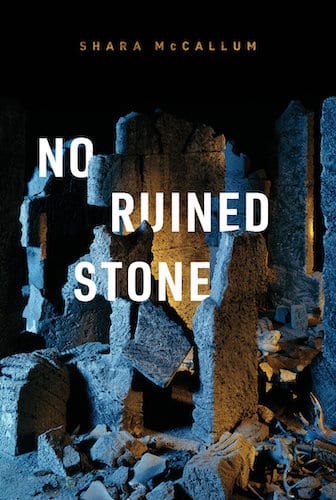 Shara McCallum writes letters to the past and to the present in No Ruined Stone, making the epistolary poem a reliquary of what-could-have-beens. Within these lines is a sure and graceful voice, and with a handy timeline in the appendix, I hungrily skipped between Scotland and Jamaica, fingers greedy for the next page. This is a collection I eagerly return to, it’s freshness so enveloping and jolting. I love how it makes me question why we let history lie. (Alice James Books)