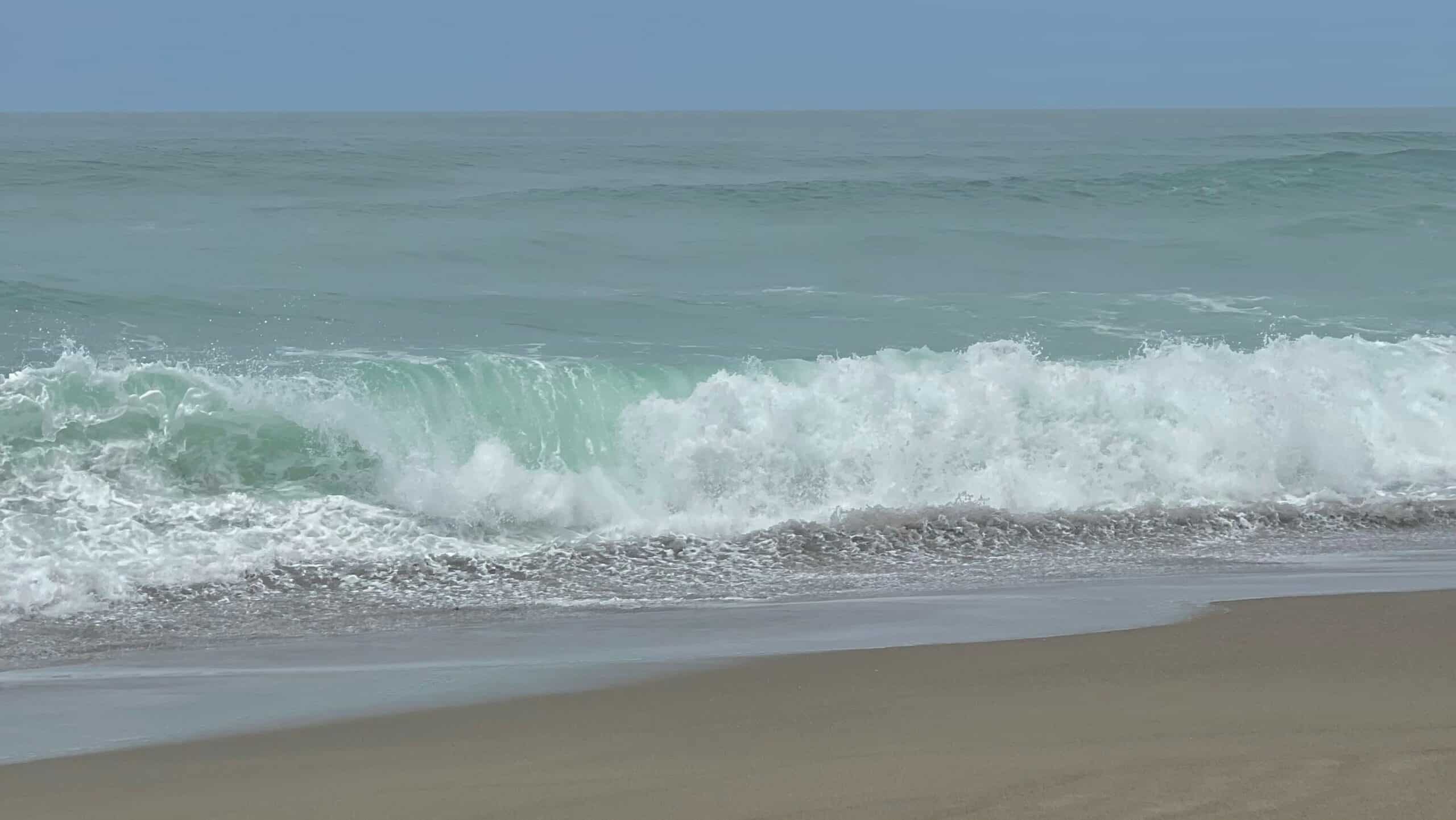 Imagine a wave. In your mind’s eye.

We like to imagine—in our humanness—waves as traveling water bodies. But that isn’t quite accurate. Waves are kinetic energy from vibrating water particles interacting through seawater. The particles move perpendicularly back and forth to create energy, the water forms a circular motion in relation to the seafloor and wind, an orbital rotation is born. The water itself doesn’t travel very far at all. The wave is not a body of water. Waves bear energy, not water, across the sea. When we look out at waves coming toward us on the shore, we imagine they are coming to us. We long for it, I think. Sometimes I wonder if our longing is memory. A desire to return to that breathable aquamarine past. As a child, I used to run into waves with all my clothes on, without stopping—alarming my parents, alarming other human coastal visitors. On the Oregon coast, waves can be formidable and seals and whales are quite easy to see. Sometimes I wonder what the waves, the seals, the whales thought about all that small human energy running to meet them. I wonder what sediments collect and redistribute through water to become sand, rocks. I think about life sediments too—particles of the past, present. I ended up being a competitive swimmer for twenty years. My father drowned in the ocean when I was twenty-six. I resuscitated him, but he lost his memory. He no longer remembered abusing his wife and daughters, though he remembered our names. My daughter’s ashes live near Heceta Head Lighthouse in Oregon. When I see children at the beach now, or adults who wade into the waves without care, or even dogs, I have a mother’s eye. I am ready to run in again. Like energy waiting to be born, or energy waiting to be called home. It helps me to stare at the ocean and remember that she is a carrier of all things living, all things dead, in perpetual motion, revolutions or swells, crests, crashings, dissipations. 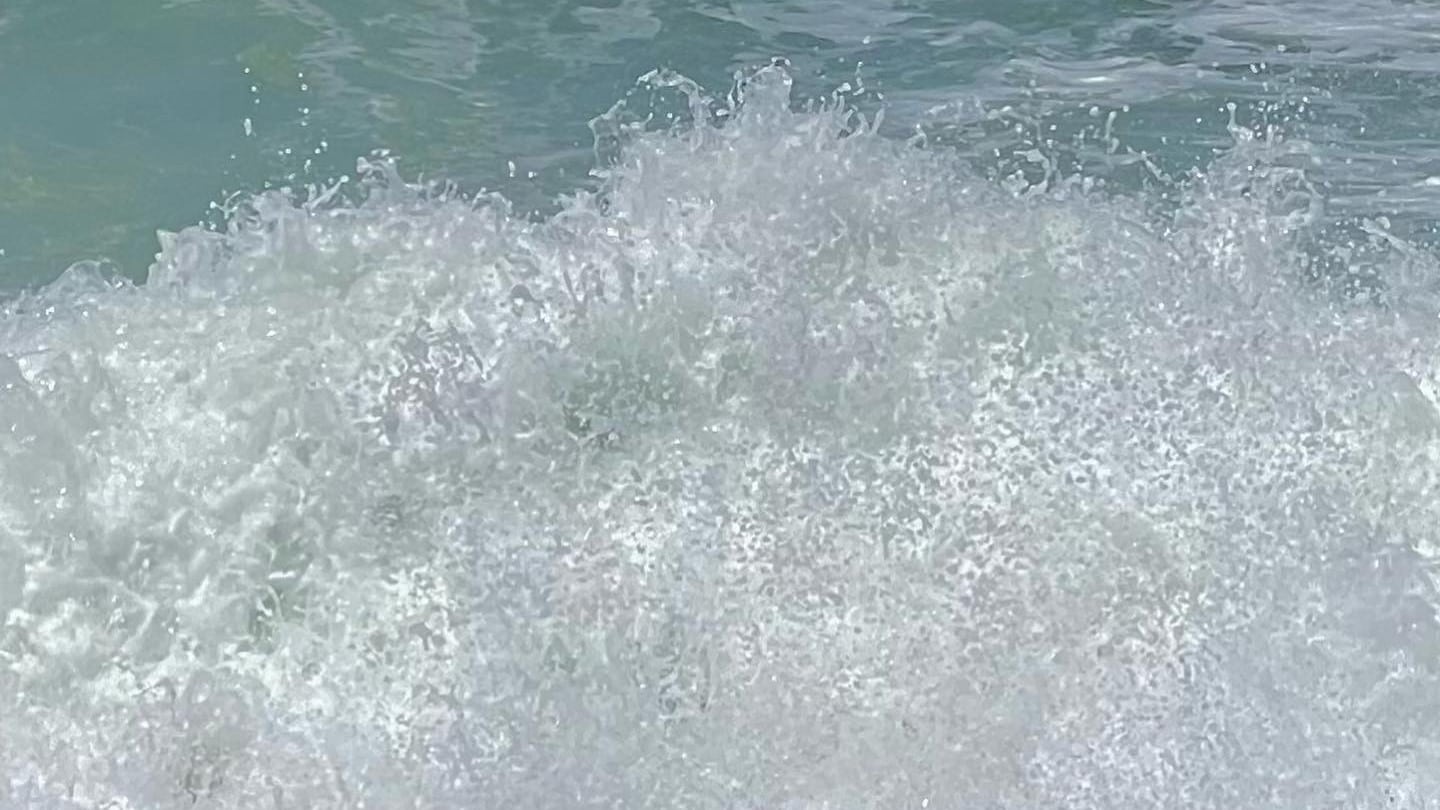 A wave crashing onto the shore in Oregon carries a unique dramatic flair compared to waves from some other ocean waters. I’d like to say the entire Northwest coast is simply more dramatic than the East Coast, but having lived in Massachusetts and New York, I know that isn’t true. About crashing waves or crashing people. When a wave crashes onto a shore, it is the outcome of the wave’s orbital motion being rearranged by the seafloor and sandbars. When a wave moves through water, the surface water is not the only element that follows an orbital motion. A column of water underneath it echoes the same motion. You could say an imbalance occurs. In shallows, near shore, the sand floor slows down and shortens the lower part of the wave. The wave’s crest then reaches higher in your line of sight. In that rolling motion, the imbalance in the wave—which is not water in motion, but energy—comes to a breaking point. The crest rises and falls, then crashes. The energy is dissipated. You are left with white frothy foam maybe tickling your feet. Or perhaps you run from the end of the wave so you do not get wet. Some people perceive a wave as crisis, others as calm. Before a wave is born, before you witness the crest and imagine the underwater trough, there exists a resting energy of particles or electromagnetic fields. I live near the ocean in the Pacific Northwest. I stare at waves more than most people, I suspect. I look for resting energies. I watch for—or imagine—energy welling up, like watching for an event horizon. I study crashing crests. In oceans. In people. In myself. It helps me not give up on myself or others. The ocean is so much bigger than a puny human, is why. You can release everything you are holding that is too much. 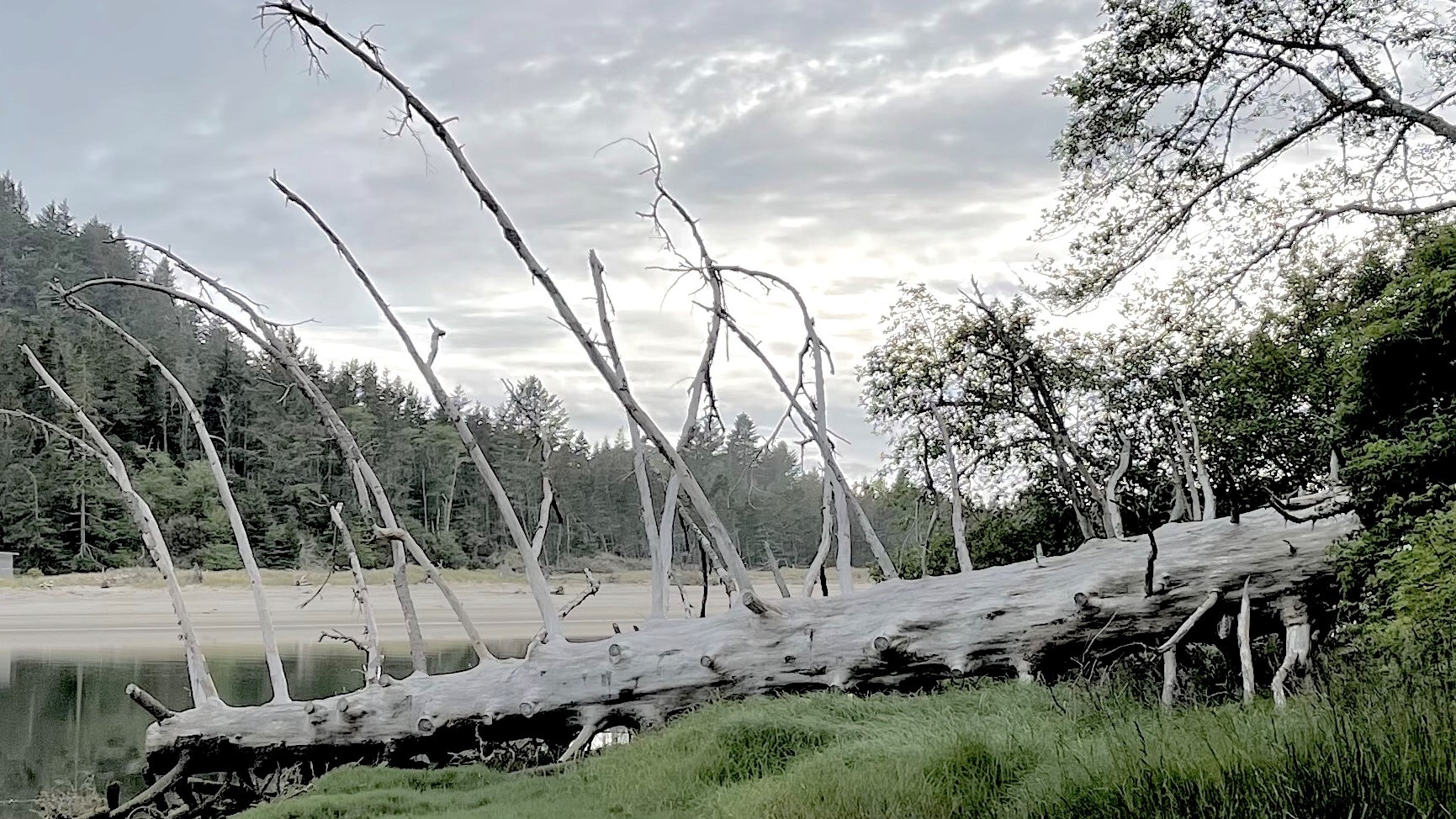 Wave power is not the same as tidal power or ocean currents. Tidal power is created by the gravitational pull of the sun and moon, those orbiting orbs we’ve created entire epochs and mythologies around, with and without science. I can’t help it, I often think of science and myths as swirling around each other like a DNA helix. I think of spirits and gods of the sea: Yam and Olokun, Chicamassichinuinji, Nammu, Bangpūtys, Morskoy, Lir, Ægir and his nine daughters, Poseidon and Nerites. All those stories and figures associated with the power of the sea. Ocean currents are born of the Coriolis effect, temperature, the degree of salinity, and cabbeling—the process that occurs when two masses of water with different temperatures and saline content mix to form a third with a higher density than either. The third entity sinks. I think about that third entity a lot, like my daughter’s body going from growing in my belly, to lifeless in birth, to fire, and then to ashes, eventually gently sinking or dissolving in the sea. Everything in life is a matter of the motion of energy. Surface waves are mainly created from wind passing over the surface of the sea. An energy transfer happens from wind to waves when wave energy is slower than the wind speed just above it. Another way to say that would be the water goes into “shear stress,” and waves are born. There are also what I have come to imagine as death-driven waves. Rageful waves. I mean, not really, but in my imagination, when I stare at a stormy sea. Like the ocean is tired of our blunders and disrespect, even though I know that is not true. Severe weather and storms can create a long dangerous wave. Storm surge. Underwater earthquakes or landslides can create tsunamis. Storm surges and tsunamis create a colossal rise in sea level; when they hit shore, they can cause death and destruction on a massive scale. But in the natural world, and possibly every other where, death leads to new life. Maybe that is the language of oceans.

Imagine a whale fall, a dead whale body sinking slowly to the ocean floor. Now imagine an entire ecosystem forming around the carcass—brilliant vesicomyid clams, polynoids, galatheid crabs, sea cucumbers, lobsters, giant isopods. Or imagine a mighty Sitka spruce making its way from along a river to the sea, the sea carrying it over time, then bringing her body back to shore. Sometimes the bodies of ancient dead Sitka spruce trees look to me like whale carcasses delivered to shore by water, their bleached gray-white branches reaching outward like giant ribs. And in between the ribs, under the spine, salamanders and insects and arthropods thrive. On their massive driftwood bodies, seagulls and snowy plovers, osprey and sandpipers, wood ducks and pelagic cormorants, eagles and turkey vultures rest, feast, leave feathers like stories we might tell if we could imagine our place in the story differently.

If we could imagine ourselves as small particle parts of a larger wave, instead of the center of the universe.

Lidia Yuknavitch is the nationally bestselling author of the novels The Book of Joan, The Small Backs of Children, and Dora: A Headcase, short story collection Verge, and of the memoir The Chronology of Water. She is the recipient of two Oregon Book Awards and has been a finalist for the Brooklyn Public Library Literary Prize and the PEN Center USA Creative Nonfiction Award. She lives in Portland, Oregon. Her new novel Thrust is out this month from Riverhead Books.