Read an interview about this excerpt here.

WHAT MAKES AN ORCHARD? Nothing more than apple seeds and dank, dark earth, plus the labors and hopes of men: every seed the brothers plant is a dream of a tree grown, every completed nursery a belief in a more productive future. Upon their chosen plot, they drag the horizontal blade of their two-man saw through an oak’s stubborn heart, the steel passing from faun to man and back again. They make the cut close to the ground, aiming to leave as little stump as possible, even though the brothers will abandon the stumps to rot, their roots softening until more permanent settlers arrive to pull them. Whenever he pauses to wipe sweat from his sunburned brow, Nathaniel resumes again his endlessly repeated cant, the ever-evolving speech Chapman has heard beginning to end countless times. “The wilderness must be pushed back,” he says, before decrying the unruly contours of the Territory’s fish-rich lakes and malaria-ridden swamps, its many waterways waiting to be straightened and smoothed. He details the surveyor’s grid being laid down over the future shape of each of this new country’s settlements, each plot platted out, the first footholds for future states to be divided into holdings fit to be owned by new American men, each a kingdom exactly equal to the quality of the man’s efforts. Everywhere there will be newly productive farms and innovative industries, new concerns for timbering and the mining of coal and copper amid pastures cut from the forests, fruiting orchards replacing uninhabitable swamplands.

“It’s by our ingenuity that our civilization is produced,” Nathaniel says. “Other men have lived here for a thousand years, but wasn’t the country we found nearly as wild as the day they first strode it? Where was their imagination for right uses? Where are their fences, their domesticated herds, their smart households making useful goods, ready for market? Why did they lack brick and mortar, steel saw and iron axe, the long reach of the musket? Could these first men not hear the voice of God here, as we do? We followed them to this Territory less than two hundred years ago, and already we have named it better, this America; already we’ve set out to properly parcel and sell its splendor, to make ready the state to be.”

Chapman doesn’t drop his end of the saw, he needs neither his brother’s break nor his brother’s nation-building tall tale, this aspirational mythologizing, its many erasures of war and disease. “You wish to be like a god,” he says quietly, letting slip only this bland objection. He knows better than to argue his brother’s points more voraciously, when the only reward for doing so will be a day of Nathaniel’s stubborn anger in the fields or else his sullenness around the night’s cookfire.

“If we are all made in God’s image, why not act like Him as well?” Nathaniel asks, and Chapman lifts his horned head to object, Not all, not me— but before he can speak his brother says, “Now pull, and let us put this ground to right.”

Their clear-cutting is slow, the centuries-old trees terribly dense from bark to bark: it takes an hour to cut an oak, another to limb it, a third to saw the trunk into logs ready to be rolled and stacked at the river’s edge. Finally the oak crashes, half its branches breaking beneath its bouncing weight; afterward each brother works his tomahawk methodically up the tree’s length, hacking the rest of the branches free. Soon their hands and forearms are slick with fresh sap, soon the sap is riddled with flies and bees and other hungry insects; their labors litter the ground with bright tan sawdust, with cut wood ready to be dried for kindling. Chapman aims to hurt no other creature, but every fallen tree spills birds’ nests, squirrel hovels, spiderwebs, and wasps’ nests. Everywhere the brothers make a home for an apple tree is somewhere something else no longer lives, and surely it’s not only the saw that diminishes the world. What about every booted or hooved footprint stomping a stand of moss? Or the sparkling trout taken out of the river rapids by Nathaniel’s fishhook, its belly filled with roe? Or every honeycomb broken and licked clean, every handful of berries Chapman snacks on whose absence deprives a bright bird, a nosing doe, a lost cub—

“Yes, brother, yes, a tree must die so a man might heat his house,” Nathaniel says, “but surely there will never be any shortage of trees.”

It’s impossible to do no harm, but how much harm is permitted? Chapman has asked this question since he was old enough to wonder after his mother, to hear how in the birthing of his hooved body she met her end. Nathaniel tells him it wasn’t his fault, but if not his, then whose?

Chapman works through the afternoon rain, he does a settler’s work while settling nothing. He cuts and clears and hoes, he takes his turn dragging their makeshift plow through the rock-pitted ground until the brothers have turned this narrow plot of earth alongside the bright-sparkling river into quick-carved furrows of blackest dirt, their rows as straight as the stump-ridden earth will allow. After the rain trickles off, Chapman begins moving down each row, leaving behind cloven footprints in the soft turn of the soil. Unlike his faunish feet, his hands are human enough: fingers clawed, yes, backs furred, but all the rest commonly dull. He takes a handful of seeds from his leathern bag, he presses the seeds one by one into the black soil. Each seed is a bitter pill of wax and wood and cyanide-laced prophecy, leafed future: a tree in embryo, its nature impossible to know before it grows. It’ll be ten years before these trees bear fruit, but as he plants Chapman imagines them already past their flowering, each tree’s apples offering fresh wonders of touch and scent, texture and flavor: the skins might be red or yellow or green, dark-mottled matte or shined clear as glaze; the flesh moon pale, jaundiced, browned as if rotten. Only a few seed-grown apples are ever sweet; the others are destined to be peppery spicy or puckeringly sour, some repulsively bitter spitters.

Chapman plants another apple seed. By day’s end, he will have planted two hundred seeds in neat rows, each stringy with pulp and pomace, each given its own hole, each hole mounded over by a scooped handful of black dirt. It’s such a simple act, producing such a complex being, sprout and root, trunk and branch, leaf and flower and fruit unfolding. An apple seed becoming an apple tree is as much a function of time as of space, the years to come as necessary as rich soil and plentiful rainfall across the thousands of days it takes to make a tree fruit, for a tree to make fruit containing seeds of its own.

For the next stretch of nursery, Nathaniel hacks down more pines and maples while Chapman lifts moss-covered rocks from where glaciers let them lie, carrying them into the remaining forest or casting them into the sparkling river, where their accumulation forces free water into swirling rapids. From many a fallen tree there spills a nest of eggs or hatchlings, beneath every rock there is a wealth of worms. Chapman studies the riverbed hemming his nursery, how its new rapids also form a nearby pool of calm water that trout might find fit for spawning. When a bird’s nest falls to the ground he stops his work to carry it intact to a stretch of trees past the bounds of his planned nursery, despite Nathaniel’s scoffing, his entreaties for efficiency and haste, productivity above all else.

Wherever Chapman does not plant or plow, native abundance persists. Hundreds of miles of virgin forest lie in every direction— surely enough free woods will always exist for every displaced creature to find a new home. Surely the world Nathaniel aims to build can coexist alongside the world given and grown. Or so Chapman hopes. From these seeds will grow enough seedlings for Nathaniel to supply six families, six ruddy husbands and their brave wives and whatever squalling children are already born, the first of the many each man and woman might wish to have, the multitudes necessary to settle the continent. Thirty trees for each family, bought from enterprising Nathaniel and used to better secure their legal claim to whatever plot of cleared land each family has chosen to build a cabin, over whose door they might hang an oil lamp to light the unbearable dark of the Ohioan woods.

To plant an orchard takes a certain amount of time; hours pass, the sun flings itself high in the sky before falling fast. The temperature drops, the humidity becomes more bearable, a different hum of insects asserts itself. Chapman plants a seed, and whatever tree grows from it will create no exact copies, not without the art of grafting, unpracticed by the brothers. No matter how many trees they plant, they might produce any particular tree only once, and its uniqueness might easily be lost to weather or predation, to human whim. As the day at last dims, Chapman dreams again of re-creating one such unique specimen, the one he believes is the oldest fruit of the species, lost long ago but still hidden in the potential within each new apple tree, possible to grow from any particular payload of seeds.

This is the story he tells himself, his way of making sense of his years of labor.

But still, sometimes Chapman reflects on the backbreak of a day’s work and thinks, All this for an apple. All this for the only apple I want to eat. And what else might his apple cost? 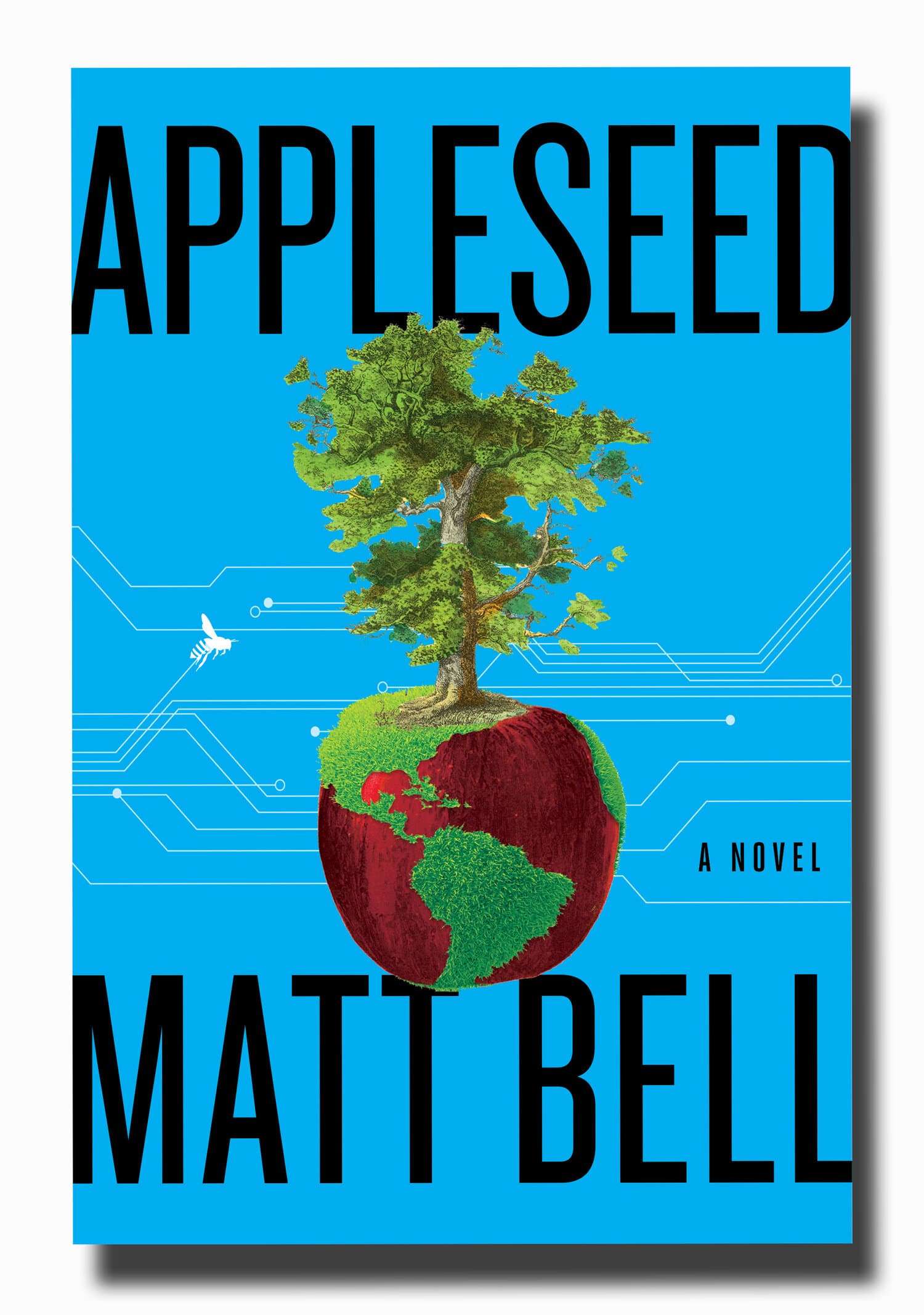