Drained stone pond. Where is your water? Where are the koi?

After being closed for nearly a year for the COVID pandemic, the conservatory has re-opened, but with restrictions. We come according to the time on the reservation; we walk the path in one direction. Hello, garden. Chime, chime—Hi, Dad. My father, a solitary person who never used to phone, is lonely now.

Probably the koi are in a tank in a back room somewhere. I miss them and their quivering huddle near the edge whenever they saw a person, their hunger and hope that they might be fed.

Hello, boulders partly buried in the earth. Hello, four hundred tons of rock. Do you miss your quarry in Apple Valley, your stone brothers and sisters? The Japanese refer to rocks as the bones of the earth. As dragon bones. As skeleton that holds the world together.

In my first pandemic, the AIDS years, when I visited friends near death, I thought that our last moments together would be luminous, like in the movies. Really, we waded through the muck of survival. We might spend the whole time helping them find a comfortable position. Or we would sit in bleak silence, because my dying friend had reached a place I could not follow. Today in the garden I feel as if I’m visiting a sick person. As if the whole world has gotten sick and is leaving, and nothing is left to care any longer about rocks or sun.

I picture the koi in a shallow water-filled box, glinting in the dark, a child’s idea of treasure. Their glint-glint-glint and undulation, their shimmy and flick. Hello, orange lanterns bobbling underwater, little koi, wherever you are.

Here is what I know: Death is not scary if you spend enough time around it. (Hello, yellow CAUTION tape blocking entry points to the bridges.) The path toward death is different each time, but the markers grow predictable. Also, the effects of death on a living body—say, mine—are cumulative, and each death calls back and piles upon all the earlier ones.

After so many people I loved died of AIDS in my twenties, for a while I had planned to spend my life doing hospice work. Massage therapy. Easier to stay among the bones of the earth, I thought then, than to always be moving out and in. Hello, gray sky.

Master Gardener Masami Matsuda, wherever you are: thank you for designing this garden. When this garden was first built, a few decades ago, the American workers did not understand how to place stones in the Japanese way. The whole crew stood around for hours with their shovels and cranes, disbelieving, while Matsuda and his assistant stared at a single stone, waiting for it to speak and reveal its face. Each stone a small drama was how one of them later described it.

Matsuda-san, I want to learn how to be like you

the man whose city Nagasaki

was bombed, who then designed

a garden for the people who bombed it. 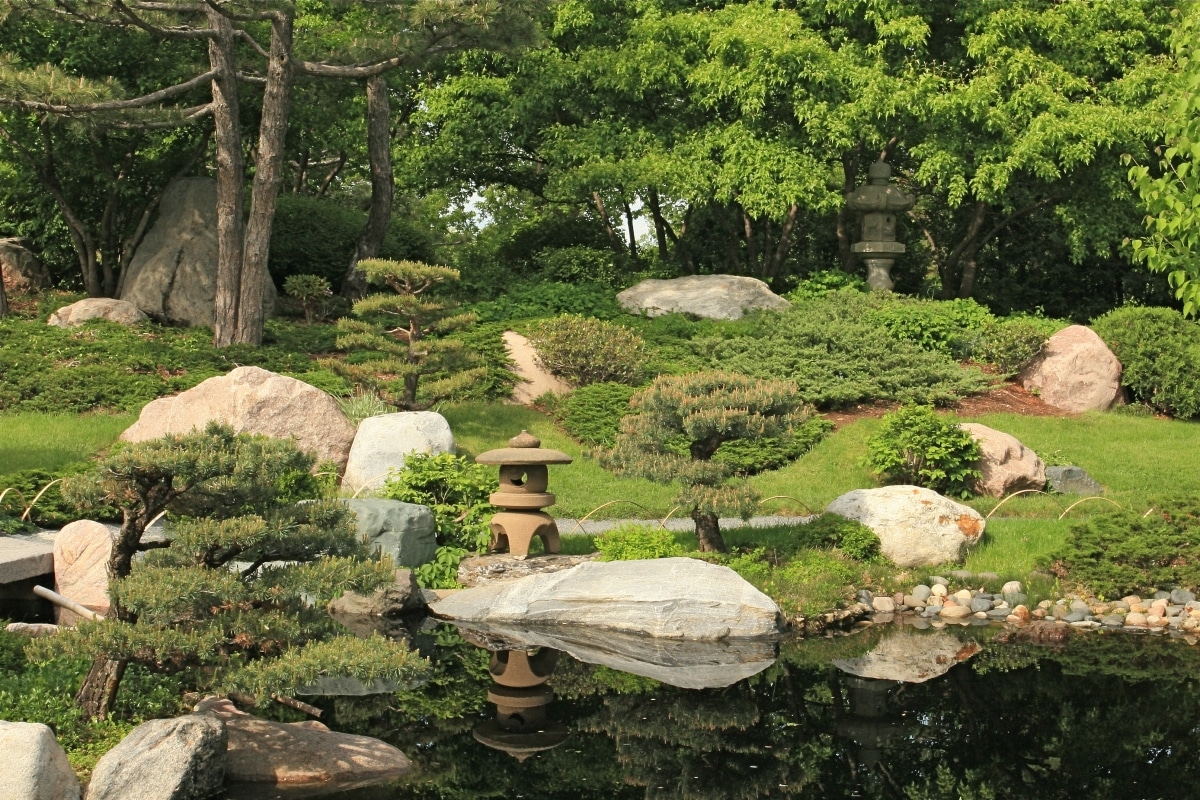 It is a long operation to get my mother to sit up straight in her chair, stand, then squeeze the hand brakes on her walker to release them, never mind the walk to the bathroom. Taking the first step is always the hardest, says my nurse-sister. But not that long ago, my mother and father regularly drove hundreds of miles in a single day, to visit me. Sometimes my mother flew, alone.

My mother loved teenagers and young people, and she was game for a lot. When I was in my twenties, she went with me to concerts put on by groups she did not know, ate foods she’d never heard of, drank coffee with my writer friends, attended poetry readings. Once, in Boston, she slept with me in a loft in the living room of the headquarters for Bikes Not Bombs, back when it was still only a few steps up from being a squatter house near Jackson Square, and for breakfast ate leftover molé the roommates had learned to make in Nicaragua.

It is hard to remember that she came to the conservatory with me and at least once we walked in these gardens. The main stone bridge here zig zags, I was once told, because the Japanese believe evil spirits can only travel in straight lines. This is a myth. My mother is not an evil spirit. The Japanese built bridges that zig zag because they are aesthetically pleasing, and keep the walker attentive to the view and the moment.

It turned out that in the moment my mother was terrified she would fall. She got halfway across the bridge and stopped. For all my mother’s independence and zippy one-liners, she feared not being held. She feared staircases, if the stairs didn’t have backs on them and she could see through to the floor below. She feared amusement park rides. She was halfway across the zig-zag bridge, and a crowd was developing behind her, visitors who couldn’t keep moving along the garden path until she moved. I tried logic, Mom, you’re not going to fall but it wasn’t working, and because I was kinder than I was when I was a teenager, because by then I had been wanting for a long time to become a parent myself, I went back out onto the bridge, took her hand, and talked softly until

one foot forward. I coaxed her

the rest of the way across. 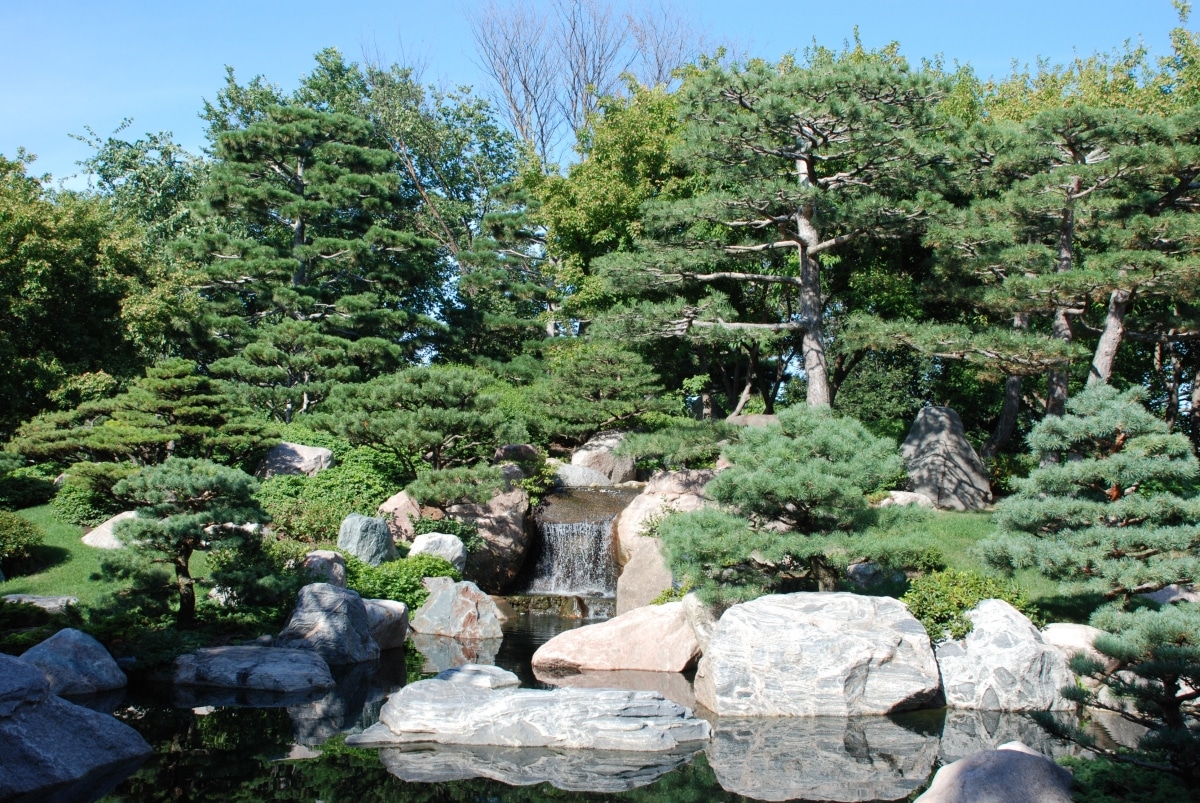 I have so many dead now! Not just pets and grandparents, but childhood neighbors and hemophiliacs and friends and most of my teachers. One day before too long, my mother and my father and my dear poetry teacher Pattiann will join them. My dead remind me of the lanterns lit at the end of the Obon festival held here every August. Obon is to Japan what Day of the Dead is to Mexico. Obon is a three-day holiday to remember the ancestors and welcome them back to earth. Lanterns are set outside doors to guide the ancestors home.

In Japan, at the end of Obon, lanterns are floated out with the tides to guide the dead into the sea, where it is believed that all life begins, and back to the land of the dead. At dusk during the festival at the conservatory, lanterns crowd and bobble through the tiny stream that runs through the garden. Volunteers working the festival stand on the shore and use long sticks to push along the lanterns, in order to prevent them from getting moored among the rocks.

When I was young, I thought it would be sad to carry so many dead people with me. Instead, their heaviness makes me feel abundant. I can wish for so many things! My pockets are heavy with coin. Suddenly I own a wealth of stories about people who were loved and here, but now are not. I don’t mean to bore you, but I must get them out of my head and let them float away. And if I am honest, I do want you to see

their flickering lights and

my great exhale, blowing out

their sparkling whoosh onto the dark water.

Read more of Katrina’s thoughts on memory,  lavender, and earthworms.