A TRAPPED TURBULENCE — as if wind had solidified. Then noise: timpani and a hard crack, the glacier’s internal heat spilling out as an ice stream far below. I’ve come on a bus from El Calafate, Argentina, to visit the World Heritage glacier Perito Moreno, to see its bowls, lips, wombs, fenders, gravelly elbows, ponds, and ice streams, and to learn whatever lessons a glacier has to teach.

Some glaciers retreat, some surge, some do both, advancing and retreating even as the climate warms. Perito Moreno is 257 square kilometers across. It advances two meters a day at the center. From where I’m standing, I can look directly down on the glacier’s snout. Two spires tilt forward, their tips touching. They meet head to head, but their bodies are hollow. Sun scours them as they twist toward light.

I walk down stairs to a platform that gives me a more intimate view. A row of ice teeth is bent sideways, indicating basal movement. Out of the corner of my eye I see something fall. A spectator gasps. An icy cheekbone crumbles. People come here to see only the falling and failings, not the power it takes for the glacier to stay unified.

A GLACIER IS NOT STATIC. Snow falls, accretes, and settles until finally its own weight presses it down. The flakes become deformed. They lose coherence and pattern, become something crystalline called firn which then turns to ice. As an ice mountain grows, its weight displaces its bulk and it spreads outward, filling whole valleys, hanging off mountains, running toward seas.

There are warm glaciers and cold glaciers, depending on latitude and altitude. Cold glaciers don’t slide easily; they’re fixed and frozen to rock. They move like men on stilts — all awkwardness, broken bones of sheared rock. Internal deformation affects flow patterns; melting occurs faster at the margins than in the center. Warm glaciers have internal melt-streams at every level and torrents of water flow out from under the ice at the glacier’s foot. The “sole” of the glacier is close to the melting point and slides easily over rock. Friction creates heat, heat increases sole-melt, slipperiness, and speed. The quasi-liquid surface that results is a disordered layer, a complicated boundary where heat and cold, melting and freezing, play off each other and are inextricably bound, the way madness and sanity, cacophony and stillness, are.

Because ice melts as it moves and moves as it melts, a glacier is always undermining itself. It lives by giving itself away.

A glacier balances its gains and losses like a banker. Accumulation has to exceed ablation for a glacier to grow. At the top, snow stacks up and does not melt. Midway down, the area of “mass balance” is where the profits and losses of snow can go either way. Surface melting can mean that water percolates down, refreezes, melts, and freezes again, creating a lens of ice. Below this region of equilibrium, ablation occurs. Profits are lost when the rate of melting exceeds the rate of accumulation. But a glacier will still advance if enough snow falls at the top and stays.

A glacier can give away more than it takes in. Is this compassion or self-loathing? What makes it act this way? For a glacier, the first law of impermanence is: Something has to give. Everything is always becoming something else. In Japan’s snow country, people say that ice and water are yin, female, and that snow is yang, male; that a glacier starts out masculine, but quickly becomes a moving giant of femininity.

A glacier is an archivist and historian. It registers every fluctuation of weather. It saves everything no matter how small or big, including pollen, dust, heavy metals, bugs, and minerals. As snow becomes firn and then ice, oxygen bubbles are trapped in the glacier, providing samples of ancient atmosphere: carbon dioxide and methane. Records of temperatures and levels of atmospheric gases from before industrialization can be compared with those after — a mere 150 years. We can now see that the steady gains in greenhouse gases and air and water temperatures have occurred only since the rise of our smokestack and tailpipe society.

A glacier is time incarnate. When we lose a glacier — and we are losing most of them — we lose history, an eye into the past; we lose stories of how living beings evolved, how weather vacillated, why plants and animals died. The retreat and disappearance of glaciers — there are only 160,000 left — means we’re burning libraries and damaging the planet, possibly beyond repair. Bit by bit, glacier by glacier, rib by rib, we’re living the Fall.

FROM INSIDE PERITO MORENO, there’s a deep rumbling. Internal warfare, someone says. In some places the ice has warmed enough to undulate, as if trying to look like open sea, its roof all crenulations, a whole ocean of ice. Other, smaller glaciers ride distant mountains to join the mass. Right here, a snow squall dissipates and sun touches our shoulders. Thunder emanates from behind a million blue spires. So much in a glacier is hidden, like a brain. We don’t know what a mass of ice is saying.

A sign tells me that an internal stream is running at a depth of 180 meters and is called the Canal de los Tempanos. More drums sound. Water pours from the portal at the glacier’s foot. Sun shines. White whiskers snap. A piece of wall breaks and drops, and waves radiate outward carrying the shards. The wind shifts and bits of ice curl back on water and are shunted into a cove. Up top, the snow squall advances. Below, an azure turret tears away, revealing what looks like a ruptured spleen. For now, Perito Moreno still advances and almost nothing is lost.

I walk to a different level. A blue dome made of bent spires collapses into itself. Ice falls down the front of the portal, starting a riptide, causing the river to swallow itself. Timpani sounds again. Or is it a hammer tapping glass, a gunshot? A whole leaf of ice spills forward. What is the final straw that makes ice break? A moment, that’s all it will take in geological time for the sun to torch this glacier. 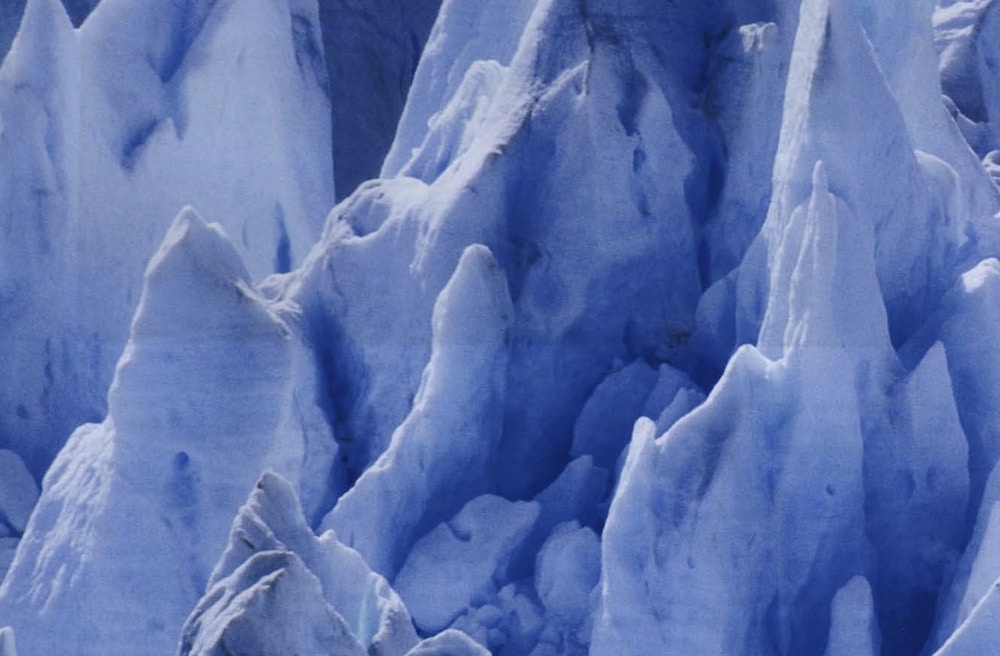 TWENTY THOUSAND YEARS AGO temperatures plummeted and ice grew from the top of the world like vines and ground covers. Glaciers sprouted and surged, covering 10 million square miles — more than thirteen times what they cover now. As a result of their worldwide retreat and a global decrease in winter snow cover, the albedo effect — the ability of ice and snow to deflect heat back into space — is quickly diminishing. Snow and ice are the Earth’s built-in air conditioner — crucial to the health of the planet. Without winter’s white mantle, Earth will become a heat sponge. As heat escalates, all our sources of fresh water will disappear.

Already, warmer temperatures are causing meltwater to stream into oceans, changing temperature and salinity; sea ice and permafrost are thawing, pulsing methane into the air; seawater is expanding, causing floods and intrusions. Islands are disappearing, and vast human populations in places like Bangladesh are in grave danger. The high-mountain peoples of Peru, Chile, and Bolivia who depend on meltwater from snowpack are at risk; the Inuit cultures in Alaska, Arctic Canada, Siberia, and Greenland that depend on ice for transportation, and live on a diet of marine mammals, could disappear.

In temperate climates everywhere, the early onset of spring and the late arrival of winter are creating ecosystem pandemonium. It is not unreasonable to think that a whole season can become extinct, at least for a time. Winter might last only one day — minor punctuation in a long sentence of heat. Mirages rising from shimmering heat waves would be the only storms.

I START CLIMBING STAIRS. There are a thousand of them — as high as the ice. “Andale!” the bus driver calls out. It’s 9:00 p.m. but still light and I don’t want to leave. Can it be that human life, animal life, and the life of this glacier are coming to an end because we didn’t care enough to stop the destruction?

The sun starts to drop and the ice goes purple. Life ends like this every night and revs up again in the morning. Climbing the stairs is like climbing a waterfall — the violet foliage of ice melting and rushing over my feet.

The bus takes me back to town. I get out near a grove of trees where loose horses wander. It’s good to be in a place where there are such freedoms. All over the world the life of rocks, ice, mountains, snow, oceans, islands, albatross, sooty gulls, whales, crabs, limpets, and guanaco once flowed up into the bodies of the people who lived in small hunting groups and villages, and out came killer-whale prayers, condor chants, crab feasts, and guanaco songs. Life went where there was food. Food occurred in places of great beauty, and the act of living directly fueled people’s movements, thoughts, and lives.

Everything spoke. Everything made a sound — birds, ghosts, animals, oceans, bogs, rocks, humans, trees, flowers, and rivers — and when they passed each other a third sound occurred. That’s why weather, mountains, and each passing season were so noisy. Song and dance, sex and gratitude, were the season-sensitive ceremonies linking the human psyche to the larger, wild, weather-ridden world.

Now, the enterprise we human beings in the “developed world” have engaged in is almost too darkly insane to contemplate. Our bent has been to “improve” on nature and local culture, which has meant that we’ve reduced the parallel worlds of spirit, imagination, and daily life to a single secularized pile. The process of empire-building is a kind of denigration. Nothing that’s not nuts and bolts and money-making is allowed in. Our can-do optimism and our head-in-the-sand approach to economics — one that takes only profit, and not the biological health of our planet, into account — has left us one-sided.

When did we begin thinking that weather was something to be rescued from? Why did we trade in our ceremonial lives for the workplace? Is this a natural progression or a hiccup in human civilization that we’ll soon renounce?

I eat at a rustic bar with other travelers. It’s late when night comes, maybe 10:30. In the darkness, Perito Moreno is still calving and moving, grabbing snowflakes, stirring weather, spitting out ice water, and it makes me smile. O