Inspired by her love of forests, environmental activism, and the medieval Ogham alphabet which used characters called feda, “trees,” or nin, “forking branches,” due to their shape, artist Katie Holten created a Tree Alphabet by translating letters from the Latin alphabet into twenty-six distinct tree characters. The result is a stunning, whimsical, and living new language—a language of trees.

Her forthcoming book, The Language of Trees: A Rewilding of Literature and Landscape invites readers to discover this unexpected and imaginative language to better read and write the natural world around us and reclaim our relationship with it. In this gorgeously illustrated collection, Holten uses her Tree Language alphabet to translate and illuminate beloved lost and new original writing in praise of the natural world.

Orion is delighted to share an exclusive first look at the book’s cover and included Tree Language translations of writings by Richard Powers and Ross Gay. 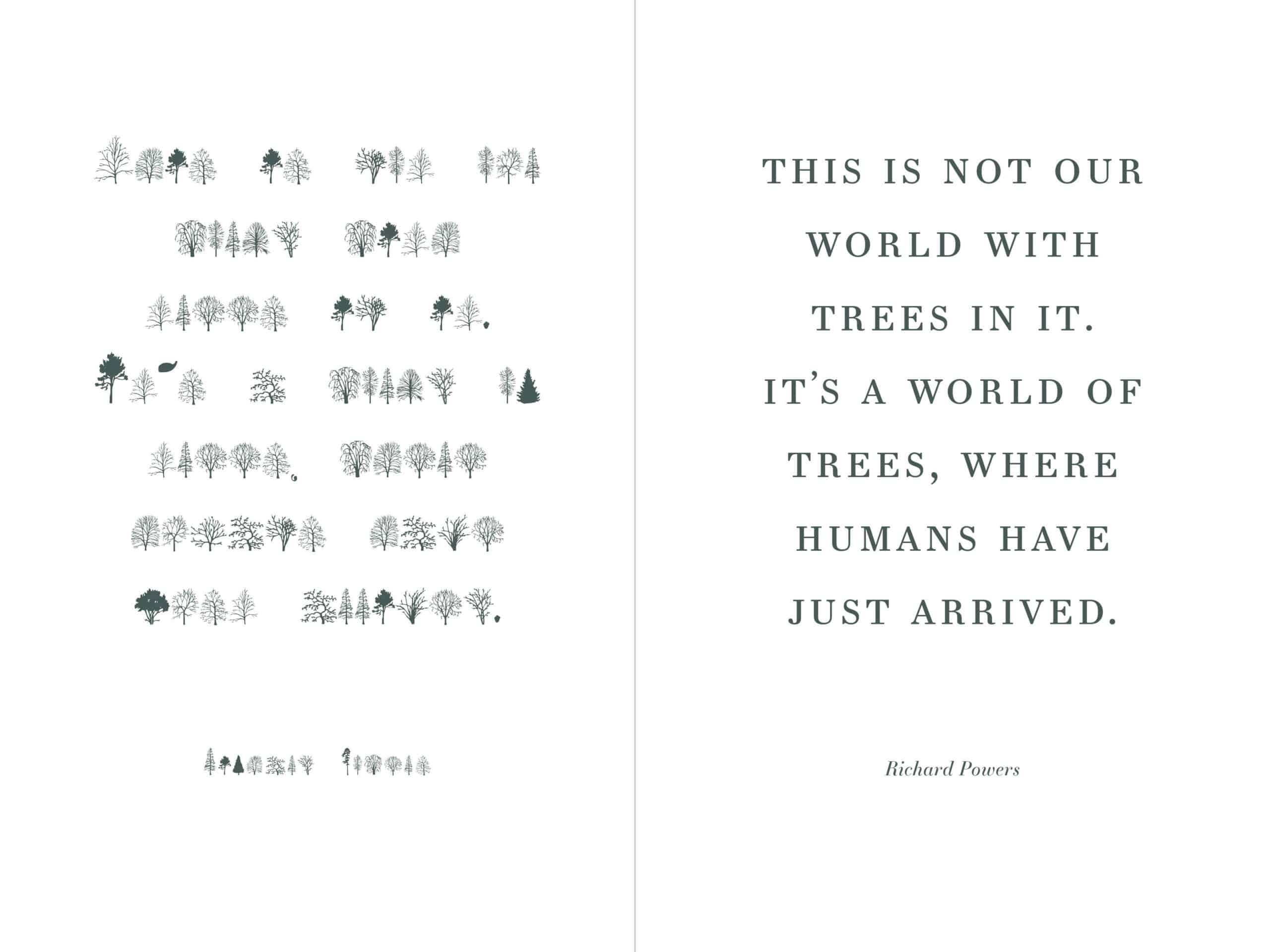 Featuring an Introduction by Ross Gay and writings from over fifty contributors including Ursula K. Le Guin, Ada Limón, Robert Macfarlane, Zadie Smith, Radiohead, Suzanne Simard, Aimee Nezhukumatathil, James Gleick, Amitav Ghosh, Camille Dungy, Elizabeth Kolbert, Winona LaDuke, and Robin Wall Kimmerer, Holten illustrates each selection with an abiding love and reverence for the magic of trees. She takes readers on a journey from creation myths and cave paintings to the demise of a 3,500-year-old cypress tree, from Tree Clocks in Mongolia and forest fragments in the Amazon to the language of fossil poetry, unearthing a new way to see the natural beauty all around us and providing an urgent reminder of what could happen if we allow it to slip away. 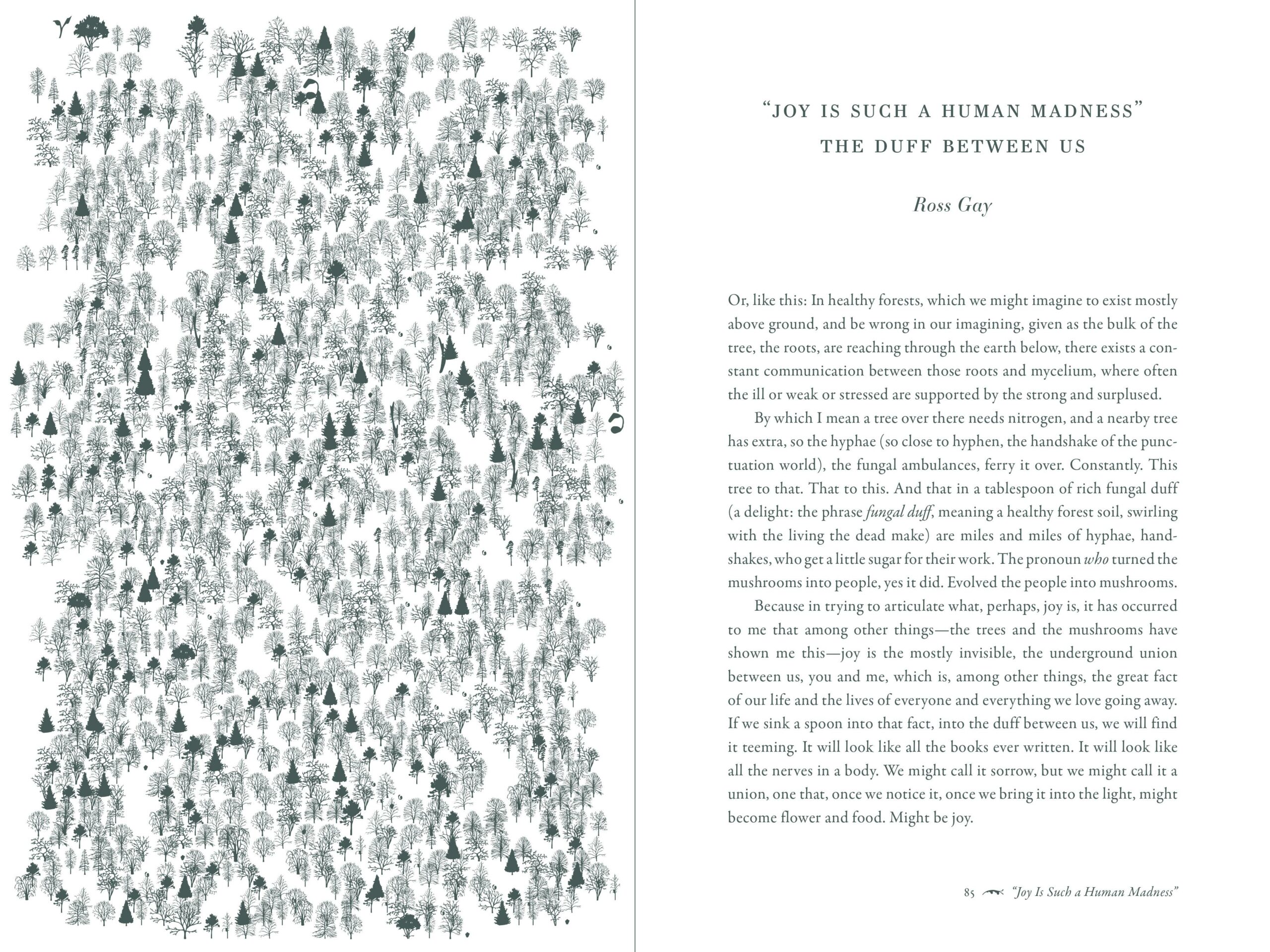 Joy Is Such a Human Madness: The Duff Between Us

Or, like this: In healthy forests, which we might imagine to exist mostly above ground, and be wrong in our imagining, given as the bulk of the tree, the roots, are reaching through the earth below, there exists a constant communication between those roots and mycelium, where often the ill or weak or stressed are supported by the strong and surplused.

By which I mean a tree over there needs nitrogen, and a nearby tree has extra, so the hyphae (so close to hyphen, the handshake of the punctuation world), the fungal ambulances, ferry it over. Constantly. This tree to that. That to this. And that in a tablespoon of rich fungal duff (a delight: the phrase fungal duff, meaning a healthy forest soil, swirling with the living the dead make) are miles and miles of hyphae, handshakes, who get a little sugar for their work. The pronoun who turned the mushrooms into people, yes it did. Evolved the people into mushrooms.

Because in trying to articulate what, perhaps, joy is, it has occurred to me that among other things—the trees and the mushrooms have shown me this—joy is the mostly invisible, the underground union between us, you and me, which is, among other things, the great fact of our life and the lives of everyone and everything we love going away. If we sink a spoon into that fact, into the duff between us, we will find it teeming. It will look like all the books ever written. It will look like all the nerves in a body. We might call it sorrow, but we might call it a union, one that, once we notice it, once we bring it into the light, might become flower and food. Might be joy.

The Language of Trees will be out on April 4, 2023. Pre-order your copy today.

Excerpted from The Language of Trees: A Rewilding of Literature and Landscape by Katie Holten, introduction by Ross Gay. Published with permission of Tin House. Copyright © 2023 by Katie Holten.

Katie Holten is a visual artist and environmental activist based in New York City, and Ardee, Ireland. She is the recipient of numerous grants and fellowships, including a Fulbright, Pollock Krasner Award, and a MacDowell Fellowship. Follow her on Twitter.