The following is an excerpt from The Open-Air Life by Linda Åkeson McGurk.

Friluftsliv is intimately connected with the Nordic culture, landscape, history, and mindset, but our craving for nature is universal. Even the concept of friluftsliv was internationally inspired from the get-go, not the least by North American environmentalists like Henry David Thoreau, John Muir, and Aldo Leopold. It was the founding of Yellowstone National Park in 1872 that inspired the protection of wilderness areas in the Nordic countries, not the other way around. (In fact, it wasn’t until 1909 that Sweden became the first country in Europe to catch up, by founding nine national parks in one go.) Nor was the Nordic form of outdoor recreation unique when it first came about—around the same time that friluftsliv began to gain momentum in the Nordic countries, a sizable back-to-nature movement flourished in North America, popularizing outdoor activities like birding, fishing, camping, and simple cabin life. Early American settlers even enjoyed the right to roam—and hunt—on private, unenclosed land, but this tradition fell by the wayside as states began to enact trespassing laws at the end of the nineteenth century. Since then, a series of Supreme Court decisions have strengthened landowners’ rights to exclude others from their property even further.

Today, access to public green spaces is unevenly distributed in the United States. Even though an impressive 40 percent of the country consists of public land that is managed by federal, state, or local governments, the vast majority of it is located in remote areas out West, where it’s effectively inaccessible to many Americans.

Open-air life hinges on the public being able to use green spaces close to home, and, without a Nordic-style right to roam, the United States needs other strategies to improve access to nature and provide safe places to walk, especially in underserved communities. As more and more people are clamoring for a life connected with nature and the future of all of us depends on our ability to combat global climate change, cities and states that have done their homework will have an upper hand. Take the twin cities of Minneapolis and St. Paul, for example. They were among the first to sign up for an initiative spearheaded by the Children and Nature Network and the National League of Cities to help cities increase equitable access to nature. And when the Trust for Public Land ranks metropolitan areas based on the availability of good parks and opportunities for outdoor recreation, Minneapolis and St. Paul have taken turns claiming the top two spots almost every year since 2015. There, almost everybody lives within a ten-minute walk of a public park and, as one New York Times article somewhat astoundingly noted, the residents seem to enjoy their green spaces, even during the unforgiving Minnesota winters. Considering Minnesota’s history, this should come as no surprise. The state has the most descendants from the Nordic countries in the United States, with as much as one-third of the population claiming Scandinavian heritage. For an American take on open-air life, Minnesota may very well offer some clues.

Just like the concept of hygge has taken on a life of its own since it became popularized outside Denmark, friluftsliv will likely generate a plethora of local variations. This adaption is expected and necessary, since other countries have different climates, histories, geographies, and land availability than the Nordics. But whatever version of friluftsliv you run into, don’t be fooled into thinking that friluftsliv is something that you can buy. Rather, it is, as Norwegian author Nils Faarlund so beautifully put it, a feeling of “ ‘belonging’ to the land” and a “living tradition for recreating nature-consonant lifestyles.”

August Casson, the American teacher who spent fifteen years living and working in Norway, is doing his part to emulate the Nordic outdoor culture that he became so attached to during his time overseas. Living north of Springfield, Illinois, is obviously a lot different, as he’s no longer able to walk out his door and hike up a mountain, then ski down, like he used to in northern Norway. But he’s embracing the idea of friluftsliv as something that can be localized. “People think that because it’s flat in Illinois, there’s nothing to do, but I can drive for thirty minutes and go hiking, paddleboarding, or riding on bike trails. I think there’s stuff to do everywhere,” Casson said. “Americans tend to think that bigger is always better, but it doesn’t have to be Norway or the Colorado mountains or the Michigan Upper Peninsula. It could just be going to a local lake and renting a canoe.”

Next, Casson is planning to gather a group from the community that will meet up once or twice per month to do things outdoors together and maybe try activities they haven’t done before, like iceskating and snowshoeing. Personally, he tries to get outside as much as possible with his two kids, mixing bike rides and walks with trail running, bouldering, and some gardening.

“When I realized what the concept of friluftsliv was, I wanted to instill it in my family,” Casson said. “To me, friluftsliv is so much more than a word, it’s a way of doing things, a way of living, and a part of the culture. It’s not something you can touch—it’s something you feel in your soul.”

For Casson, the inspiration for open-air living came from direct experience with the culture in Norway, but for Tacy Quinn of suburban New Jersey, the turning point was the outbreak of COVID-19. Suddenly, she and her husband found themselves juggling working their full-time jobs from home and making sure their two tween boys keep up remote school. No longer able to travel to see family in Idaho and California like she used to, Quinn was struggling to stay positive in the day-to-day. Then came the lockdown in the summer of 2020. “Kids are resilient, but we needed something that we could do on a daily basis to just be in the moment. Since it was considered safer to be outside, we started doing more of that, and it was such a reprieve. It just felt great to be outside,” she said.

Americans tend to think that bigger is always better, but it doesn’t have to be… It could just be going to a local lake and renting a canoe.

That fall, Quinn came across an article about friluftsliv in National Geographic and had a proverbial aha moment. Quinn’s ancestors emigrated from Norway to Iowa in the 1870s, and the idea of embracing open-air living all year round appealed to her on several levels, not the least because it gave her a way to honor her family heritage at a time when she was unable to see her parents in real life. “I started asking myself why I was dreading winter and thinking that I couldn’t be outside in the cold. I really wanted to create some joy for my family during this heavy time and felt like this could be the answer.”

Quinn knew going hiking every week would not fly with her kids, so instead she created what she called “15 Weeks of Friluftsliv,” a weekly outdoor activity to do with her family and sometimes friends as well. Some weeks, it was as simple as having a picnic or creating nature art, other times they would go glamping or visit farmers markets. Among the most memorable moments was an outdoor progressive dinner that Quinn and her neighbors put on in the middle of winter, as well as a full-moon hike.

What started as a way to stave off cabin fever during a pandemic has left a permanent mark, not just on Quinn’s family but on her local community and online followers as well. “I was surprised at how many families were interested in the ideas at first, but then again, I think we’re all craving to reconnect with something powerful. Even before COVID, life was a little out of balance, and we were constantly on the move, without getting enough quality time together. That’s what we needed.”

Meanwhile in suburban Detroit, mother-of-five Ginny Yurich discovered open-air life when she felt like she was drowning in the day-to-day demands of parenting young children. After being invited on a picnic by a friend and seeing firsthand the positive effect that four hours of nature play had on the entire family, Yurich began to rearrange their schedule so they would be able to spend more time outside. She read up on the benefits of outdoor play for children and eventually came across the concept of friluftsliv. The Nordic ethos of going outside in any weather helped her reframe her mindset and enjoy being outside even in the dead of winter, something she used to dread. “What appealed to me about friluftsliv was also that it allows you to be outside without pressure to achieve. It’s a simple concept that aims to fill your life with more outside moments. It really solved the puzzle for me.”

Today, most people know Yurich as the founder of 1,000 Hours Outside, now a global movement that aims to roughly match the amount of time children spend in front of screens every year (a whopping 1,200 hours by some accounts) with outdoor time. While spending nearly three hours outside every day may seem like an impossible feat, Yurich believes having a goal can be a powerful motivator. “If you can’t do one thousand hours, make your own numbers. But be intentional about it, and model it to your kids,” she said. “Nature will exceed your expectations. Once you try it, you’re hooked.”

Ibsen, the Norwegian poet who coined the term friluftsliv, escaped to the mountains when he thought the hoopla of society was too much to bear. Thoreau built a simple cabin in the woods to get away from what he regarded as over-civilization. As human activity has intensified exponentially since the nineteenth century, when Ibsen and Thoreau walked the earth, finding areas that are untouched by humans is increasingly difficult. At the same time, our need to take a break from the stressors of modern civilization is stronger than ever. Through open-air living, we can. Friluftsliv helps us to live happier, healthier lives right where we are, by being closely tuned into our local landscape and building the kinds of communities that we want to live in, not the kinds that we need to escape from. Cities with bike lanes and sidewalks, community gardens and neighborhood parks, urban woods and wildlife corridors, green roofs and clean waterways. Towns where there is room both for trees to grow old and for humans to flourish.

Just as the introduction of hygge made people swoon over candles, board games, and cozy family nights in front of the fireplace, my hope is that friluftsliv will trigger a similar craving for morning walks and fika in the forest. Because the journey toward an openair life starts within ourselves, we just need to open the door for it. Literally.

When being in nature feels like coming home, you know you’re living life the friluftsliv way. To get there, just keep this mantra as your guiding light:

Be kind to the earth. 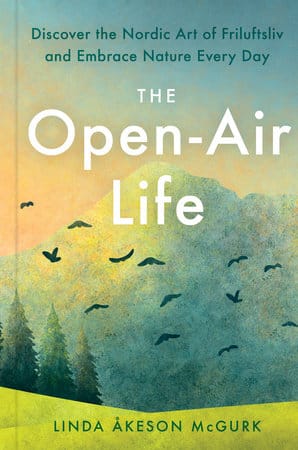