Fungi are very special organisms. Scientists don’t really know how to classify them, so they have divided the world of living things into plants, animals, and fungi. Like animals, fungi cannot manufacture their own food, which makes them dependent on organic matter from other sources. Like insects, they have chitin in their cell walls, but they lack a central nervous system. Many of them are important tree allies. They help trees find food and water by growing around the trees’ delicate root tips—sometimes even growing right into them. With their wide distribution and fluffy, cottony texture, the fungal threads greatly increase the roots’ functional surface area so that significantly larger quantities of important nutrients reach the tree.

You could think of a fungal thread as a sort of inside-out digestive system. We break food down inside our guts. In fungi, this deconstruction of organic matter into the phosphorus, potassium, and nitrogen plants need to grow takes place on the outside of the fungal threads. If you look at the bags of fertilizer you can buy at your local store to feed the vegetables in your garden, you’ll see numbers representing the nitrogen, phosphorus, and potassium they contain. The fungi provide a home-delivery service of these essential foods for trees. But, as the advertisements on television say, that is not all. The tips of fungal threads contain acid, which liquefies rock to release minerals such as copper and zinc that the trees need to stay healthy and grow strong. Tree-friendly fungi also prevent toxic substances like heavy metals from getting into their green partners and form an effective barrier against other fungi that might want to attack their trees.

Beyond food and protection, fungi provide trees with one more essential service that helps connect the forest ecosystem. Trees communicate through their root systems and warn each other about such things as insect attacks or imminent drought. As trees can’t reach every corner of the forest with their roots, the interwoven fungal threads help relay the messages. Scientists talk of a forest internet or “wood wide web.” Don’t worry about breaking these threads as you dig. There are so many of them that if you break one, another thread will relay the messages and nutrients instead.

“The tips of fungal threads contain acid, which liquefies rock to release minerals such as copper and zinc that the trees need to stay healthy and grow strong.”

The fungi exact a high price for their services. A tree hands over up to one-third of its total food production to its hidden helpers, mostly in the form of sugar. One-third roughly equals the amount contained in the wood of the tree’s trunk (the rest goes to growing branches, leaves, and fruit). Fungi use this concentrated form of energy not only for living day to day but also for growing their fruiting bodies.

The mushrooms you gather in the woods are like the apples on an apple tree. The fungus itself is composed of the delicate white threads growing through the ground, making connections with many plants. It can cover immense areas. The largest fungus found so far is a honey fungus in the Malheur National Forest in Oregon. Spread over three and- a-half square miles (nearly one thousand hectares) and weighing somewhere between 7,500 and 35,000 tons, it is the largest known living organism on Earth, estimated to be many thousands of years old. This particular fungus is not very considerate when it comes to trees, however. It kills them so it can feed off them.

Mushrooms are the preferred food of the banana slug, a denizen of and important decomposer in the moist forests of the Pacific Northwest and along the California coast. Banana slugs grow up to ten inches (twenty-five centimeters) long, making them the second-largest slug in the world. The longest is a three-foot (ninety-centimeter sea slug), so, technically, banana slugs are the longest terrestrial slugs in the world. Banana slugs work their way methodically through dead vegetable matter in forests where earthworms no longer ply their trade. They have a raspy tongue instead of teeth, which these yellow trash compactors use to scoop up everything from piles of scat to blackberries.

One of the most fascinating aspects of banana slugs is their slime. This liquid crystal (part liquid, part solid) is a multifunctional tool. The slime from banana slugs numbs the mouths of predators while also sticking their jaws together. Predators, reasonably enough, don’t enjoy this and so tend to avoid eating the slugs. Crafty raccoons neutralize the slime effect by rolling their slugs in dirt before eating them. Native Americans popped banana slugs into their mouths to numb toothache. Jane won’t do this because she thinks the mere idea of putting a slug into her mouth would probably be enough to stop her tooth from aching.

You shouldn’t try this either, because slug slime can transmit disease and, also, that wouldn’t be a very nice experience for the slug.

Banana slugs use their slime as a lubricant so they can glide over pokey twigs and sharp rocks on the forest floor, and as an adhesive so they can climb up the rough bark of trees. They use the scent in slime trails to find a mate. Slugs have both male and female organs so any banana slug will do. The slime also traps pine needles and other debris that gather at the back end of the slug as it slides through the forest. And so, the slug transports its own lunch box around, convenient for snacking at any time. And, as a bonus, slime is recyclable, so the banana slug can eat its own slime (or the slime of another banana slug) and reuse it.

“One of the most fascinating aspects of banana slugs is their slime. This liquid crystal (part liquid, part solid) is a multifunctional tool. The slime from banana slugs numbs the mouths of predators while also sticking their jaws together.”

Even if you don’t see the banana slugs themselves on your hike (which you might not, as slugs like to keep cool and so will be hiding in dark places during the day), the sun glinting off their silvery trails betrays their presence. You might also see slime sparkling on the smooth trunks of trees such as beeches, where slugs like to graze on algae growing on the bark.

On your search for fungal threads and into the territory of slime trails, you might find some small clumps of low-growing plants that take advantage of the brisk trade going on between trees and their fungal partners: waxy silvery-white or pinkish stalks with a single hanging flower head that looks like a shaggy extension of the stem. These plants do not contain green chlorophyll to manufacture food, so they tap into the sugars the trees are delivering to their fungal associates.

The sugar stick is a particularly striking combination of ivory with vertical pink stripes. Apart from the sugar stick, this group includes the ghost plant, which is so white it almost glows, pinkish pinedrops, the yellowish to reddish Dutchman’s pipe, also known as false beechdrops or pine sap, and a number of coralroot orchids. The presence of these plants indicate that the forest is in good health. Although they siphon off some of the sugar being traded, they do not damage the trees or the fungi, both of which seem happy to share.

And, of course, there are the fungi that are actively breaking dead and dying trees down, returning the nutrients contained in their wood to the ground to be taken up by the next generation of trees. You can spot some of the fungi that promote decay on standing trunks and on nurse logs. Their fruiting bodies are called conks. Delicate, frilly turkey tails have circles of varying colors radiating out over their surface. (If you see green ones, this is a sign algae are growing on them.) Sturdier shelf-like conks often come in shades of white, brown, and black. You may see beads of moisture on the surface of shelf fungi, particularly when they are having a growth spurt, which makes them look like they are sweating. The technical term is guttation, should you wish to impress your friends.

I can’t leave this subject without mentioning slime molds. Slime molds used to be considered fungi but are now grouped in the catch-all kingdom of protists. Fascinating organisms, slime molds change shape and direction as they actively search out their food. On your travels you might encounter the bright yellow dog vomit slime mold, a particularly unappetizing-looking example that seeks out deciduous logs. Raspberry slime mold, to Jane at least, looks a bit like crimson caviar.

Like lichens, slime molds and fungi come in incredible forms and colors. And they have fascinatingly descriptive names: candlesnuff fungus, parrot whitecap, old man of the woods, dryad’s saddle. Once you start looking for any of these, I promise you will find that your forest hikes are taking you much longer.

“You may see beads of moisture on the surface of shelf fungi, particularly when they are having a growth spurt, which makes them look like they are sweating. The technical term is guttation, should you wish to impress your friends.”

And all the while, the array of decomposers—large and small, animal, vegetable, and other—are reducing wood and leaves to particles tiny enough to be sifted underground, where temperatures are cooler, oxygen levels are lower, and the pace of decomposition slows. The first responders hand over the clean-up job to micro-organisms in the soil, including bacteria. These critters continue the work of eating and excreting begun by the above-ground decomposers. As the particles get ever-more minute, the next team takes over. Finally, the bodies of the decomposers themselves become part of the cycle.

Nutrients are released for the next generation of trees and carbon is buried deeper and deeper under the earth. For as long as the forest stays dark and cool, the carbon is heading for storage. If the forest is cleared and sunlight lands on the forest floor, the top-dwelling decomposers that work in a warm, oxygen-rich atmosphere reassert control and the carbon released in the decomposition process combines with oxygen to form the greenhouse gas carbon dioxide— just as it does when fossil forests are burned. Old, intact forests left to live their lives in peace do their part to ensure this does not happen.

Adapted with permission of the publisher from the book Forest Walking: Discovering the Trees and Woodlands of North America written by Peter Wohlleben and Jane Billinghurst, published by Greystone Books in April 2022. Available wherever books are sold. 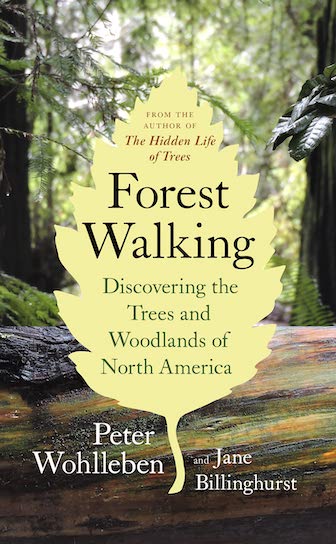 Called a “veritable tree whisperer” by the Wall Street Journal, Peter Wohlleben is one of the world’s most notable foresters and a passionate advocate for tree conservation. Wohlleben lives in Germany, where he manages an ecologically conscious forest and runs a Forest Academy for education and advocacy. His books are bestsellers in countries around the world.

Jane Billinghurst is a nature lover, master gardener, editor, translator, and author of six books. She has translated and edited several books by Peter Wohlleben, including the New York Times bestseller The Hidden Life of Trees. She lives in Anacortes, Washington, next to 2,800 acres of community forest lands.