Editor’s Note: Filmmaker Jessica Plumb spent 10 days aboard a steel-hulled schooner in June of 2022. From the deck, she and her family explored Western Greenland, witnessing the effects of climate change from land, sea, and ice. These are her journal entries.

At quarter past midnight, I’m alone in the deckhouse, watching a parade of icebergs slip stealthily down Ata Sund when the sun slides briefly behind a ridge to the west. It seems odd to delineate journal entries by date, when the Arctic summer is one long day. The rest of the crew has turned in, covering portholes to create a semblance of darkness. I can’t bring myself to descend to a bunk. Not as the midnight sun begins to brighten again, making a subtle shift from sunset to sunrise, weaving the most beautiful hours of the day together. To the east, the Greenland ice sheet exhales, sending puffs of cold wind down the sound.

When we weigh anchor and head north, we are startled by how quickly ice engulfs us. As the wind subsides, I hear a symphony of frozen tinkling all around the schooner. Each freshwater iceberg, born from the ice cap, is a small island with waves splashing at the edges. Between bergs are stretches of sea ice: frozen saltwater sheets that buckle and crunch with a soundtrack of their own. The boat slows to a crawl, and the captain decides to “test the sea ice.” This means steaming straight into it to see if we can break a path to the shimmering blue line of open water across the sound.

SkyDancer is a seventy-three-foot steel-hulled schooner, owned by a Danish and Norwegian couple, Nick and Estella. They have welcomed three generations of my family aboard, including my father, whose dreams of the Arctic brought us here, and my daughter, who shares his love of the sea. Although Greenland is new to all of us, Nick has spent decades sailing in Norway’s Svalbard Islands. Watching him navigate the ice is a master class in Arctic seafaring. The schooner grinds up onto a floe with a disorienting uphill tilt. The ice is thick, so we hunt for leads, nudging small bergs out of the way. Crunching and screeching, we emerge at last in open water, chastened by the challenge. After an attempt to continue north, we concede that the route we envisioned around Alluttoq Island is impossibly dense with ice. 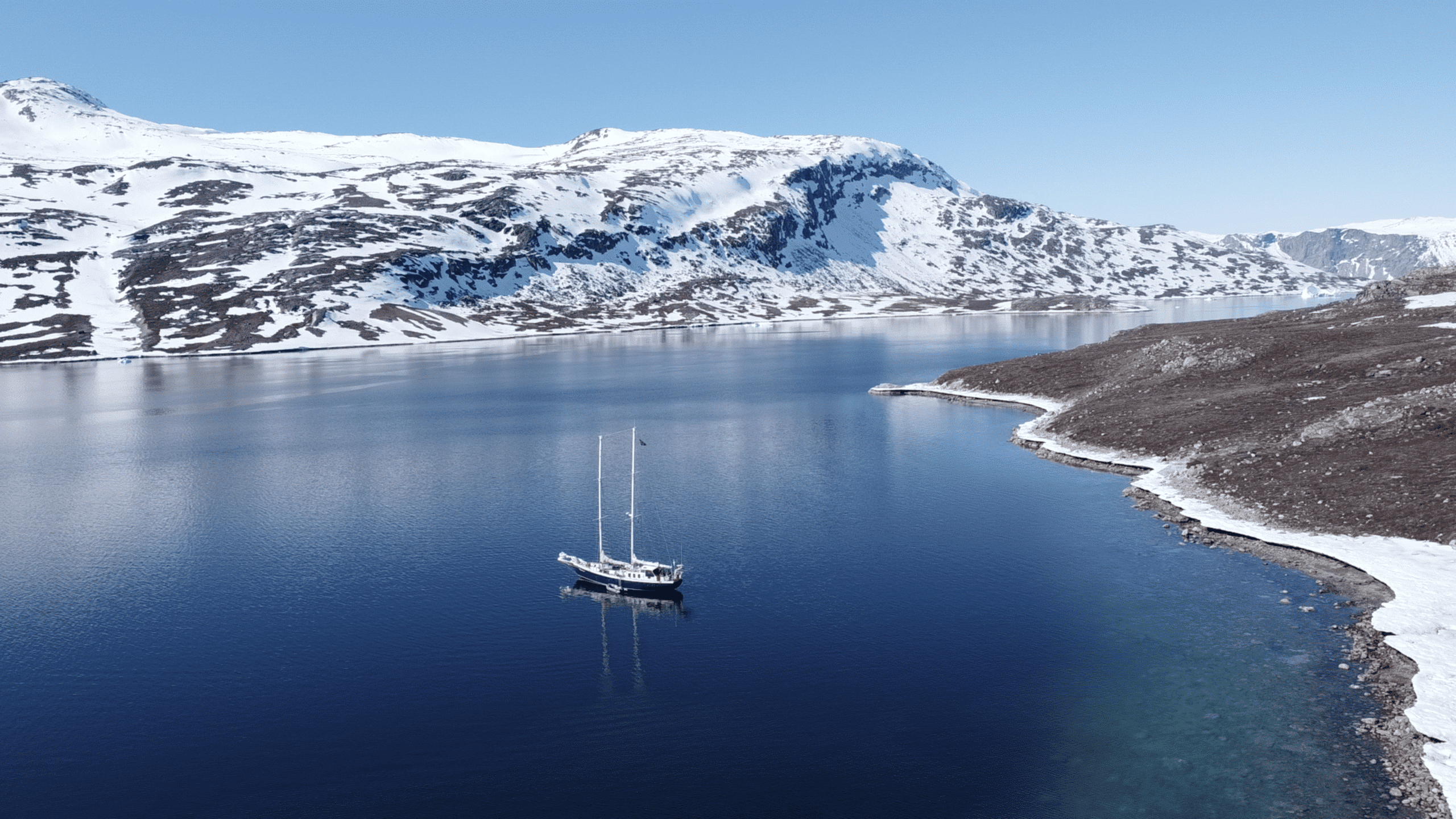 Last night we took refuge in an uncharted sound, with towering cliffs and a thin filament of waterfall. We are surprised by how often charts of this region go blank. Sometimes we rely on topography maps that offer more information about land than water. The topo maps show dashed lines along the rugged shore, which I initially pictured as hiking trails—until the dashes veered off into water, across lakes and inlets. These invisible trails mark dogsled routes, the lifeline of Greenland transportation in winter. Though the chart offered no depth soundings, we found an island with a small cove, shallow enough to set anchor.

The overwhelming majority of Greenland’s inhabitants are people of Inuit descent, experts on reading ice. Summer is late to arrive this year, though the ice has become unpredictable year-round, stranding communities that rely on sled trails. For now, the temperature hovers a few degrees above freezing, under a brilliant clear sky. The only green is moss, yet the sound of melting water envelopes us ashore. Rivulets in every swale deliver snow and ice to the sea, bubbling under crowberries and snow. Although we are surrounded by meltwater, it is surprisingly hard to find a settlement equipped to fill the schooner’s water tanks. 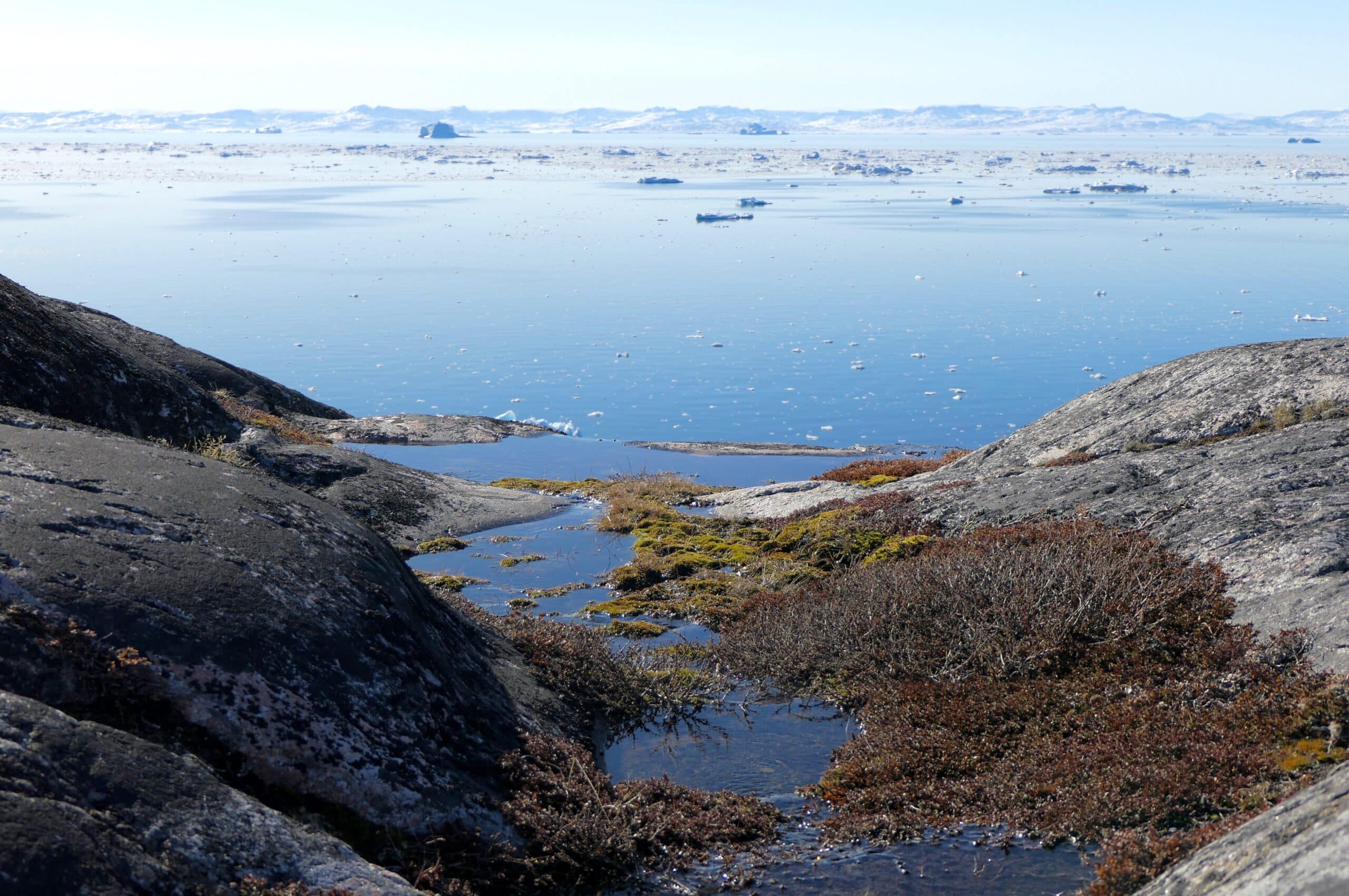 The search for potable water sends us to the town of Ilulissat, an appealing and busy little port. After filling the tanks with a fire hose, we decide to head south to Ilimanaq, traveling a route around the mouth of Ilulissat Icefjord. The fjord is a UNESCO World Heritage site, home to the well-studied Jakobshavn Glacier. As the glacier made a rapid retreat up a deep fjord, it left shallower sediment near the entrance, which now acts as a catcher’s mitt for enormous icebergs creeping toward the sea. Mountains of ice stall at the mouth of the fjord, until they melt just enough to clear the bar and drift into Disko Bay, sometimes generating tsunamis when ice fractures. The fjord is among the largest sources of icebergs in the North Atlantic. 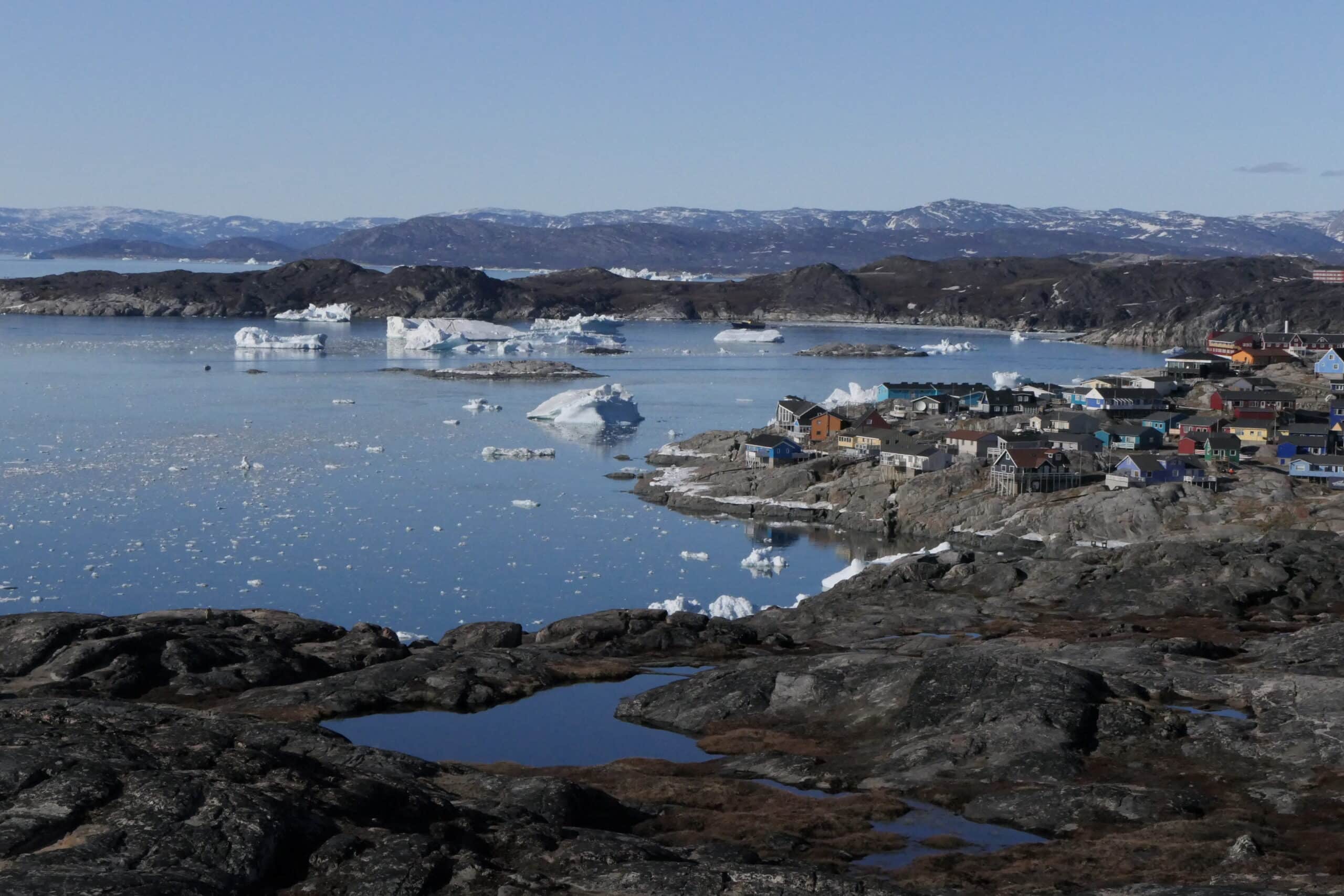 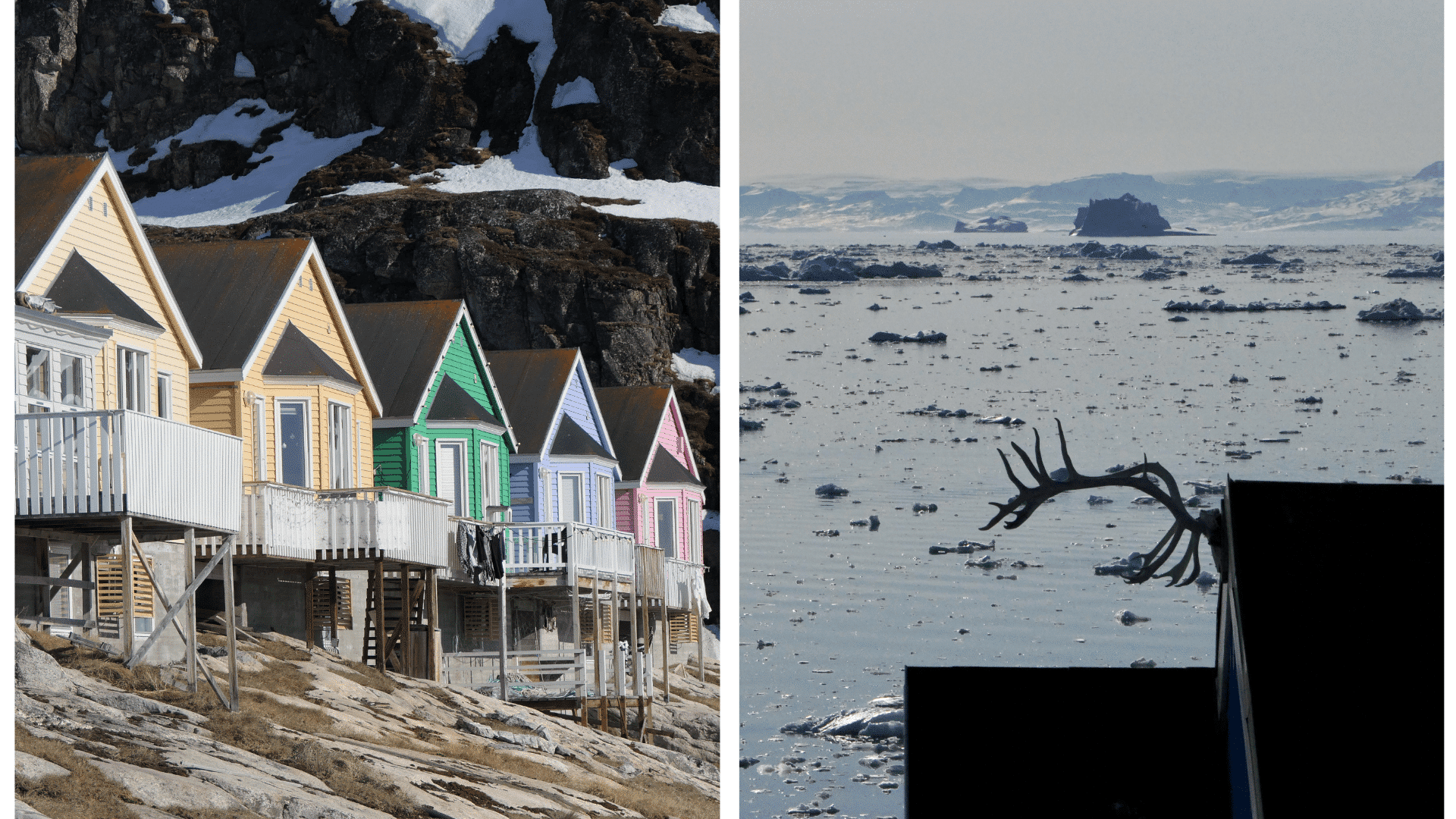 We give the fjord a wide berth as we circle to the south, but our route passes through hundreds of icebergs on the move. Reflections gaze back at us as we glide through frozen sculpture on an exceptionally still evening. Some icebergs teeter precariously, ready to roll, while others have the smooth, pillowy sheen of ice that has been turned and softened by the sea. The largest iceberg looms like a steep Pacific Island, frozen solid, complete with coves and an aquamarine lagoon. The beauty and diversity of these traveling icebergs enthrall us. Yet every one of these glittering sculptures will disappear eventually in the Atlantic, joining king tides that flood St. Mark’s Square in Venice, or the streets of Miami. 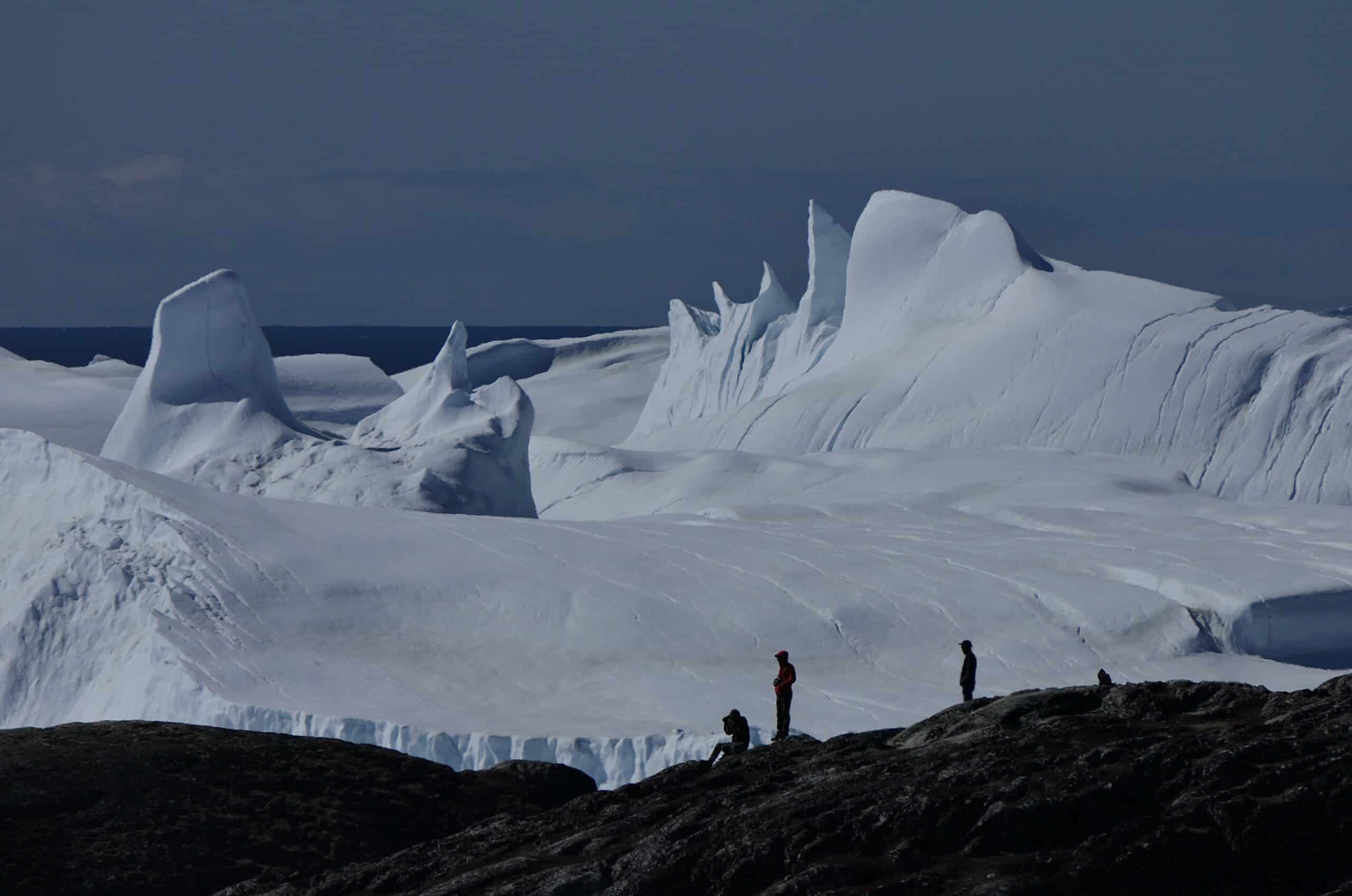 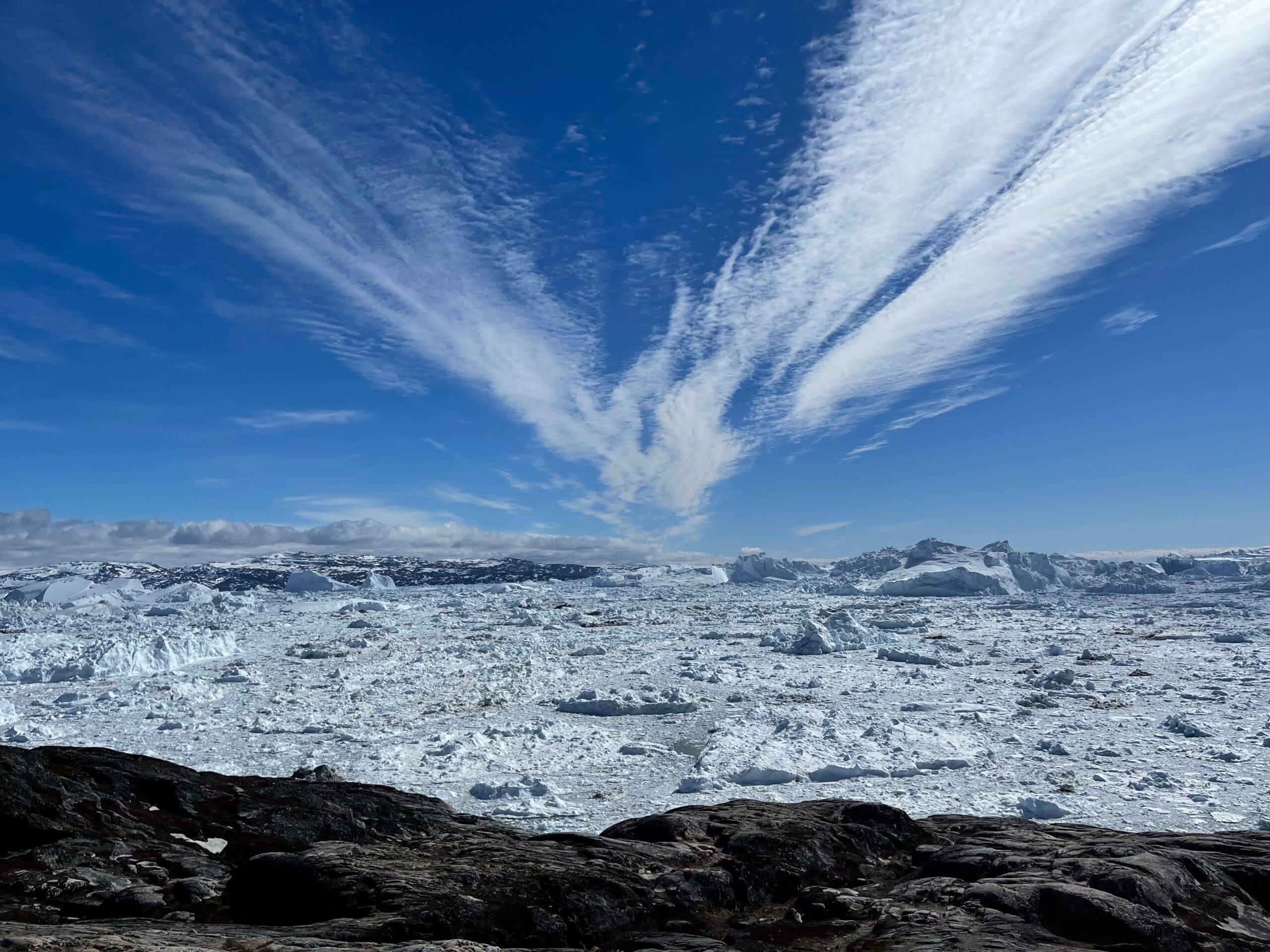 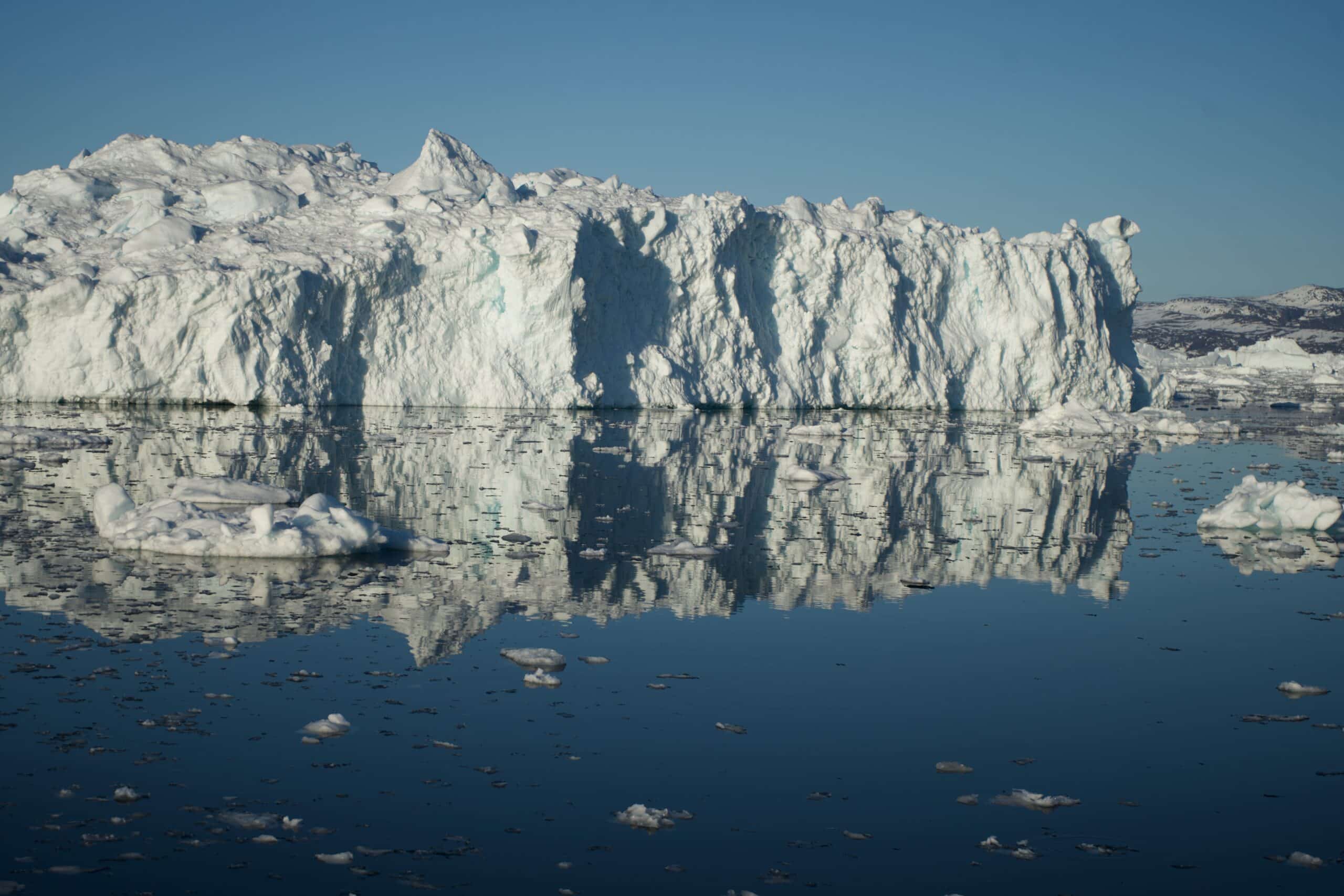 By late evening we arrive at Ilimanaq, a tiny, picturesque town with waterfalls framing the dock. Despite the long shadows, we discover a group of Danes working busily ashore. In an incongruous scene, they are unwrapping high-end kitchen gear, destined for a restaurant, soon to open in one of the waterfront’s historic homes. A row of new cabins awaits incoming summer tourists. For now, the cabins are empty, and we hike past them on our way up the wild coast. The only sign of others on the trail is a soft, brown clump of musk ox fur.

Disko Bay is served by a handful of prop planes each week. Small towns are accessible by boat for a few summer months, and by helicopter or dog-sled routes in winter. We have yet to see another sailboat in these waters, although we’ve heard a few are headed north. A brand-new airport is in the works for Ilulissat, with jet service planned to begin in a few years, which will transform these remote communities. 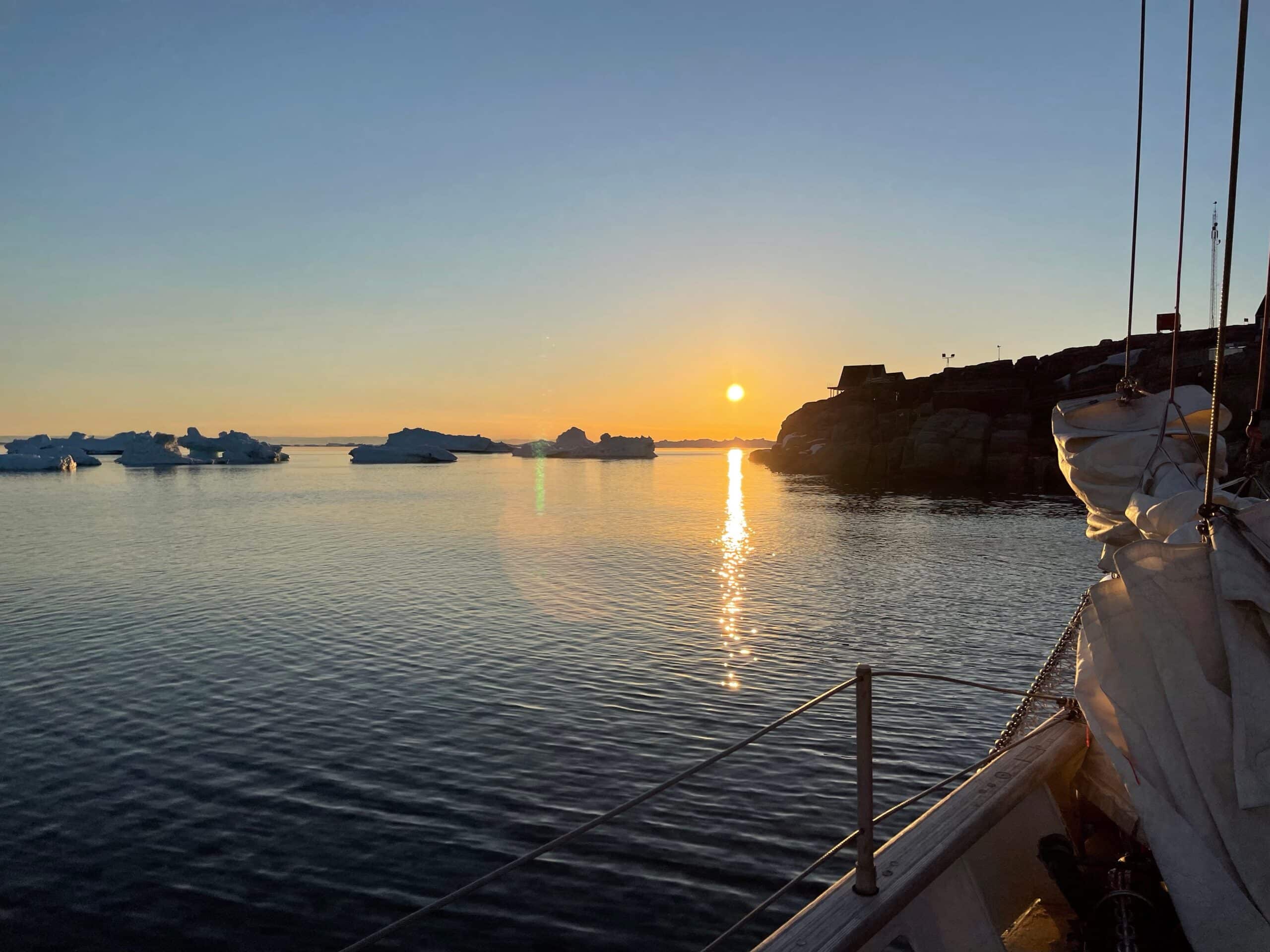 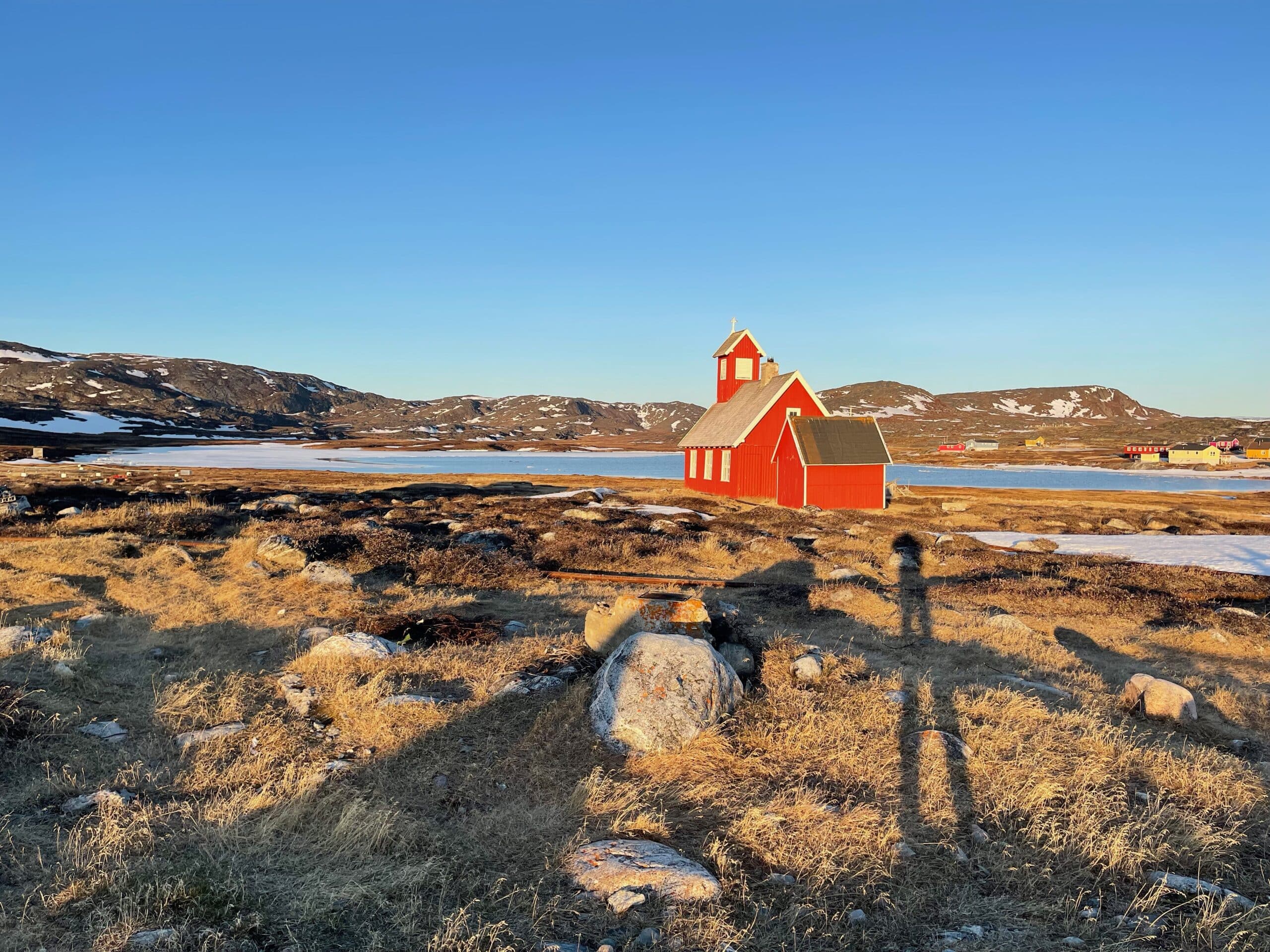 The midnight sun and the long shadows it casts at Ilimanaq.

Clouds came in for the first time this morning, after a ring appeared around the sun. Now the sea is slate gray, a relief after nonstop sunlight. We’ve been sailing across the south end of Disko Bay, following humpback whales. Last night we anchored at Akunnaaq, a tidy town of brightly painted homes perched on a steep rocky peninsula, with just over forty residents. 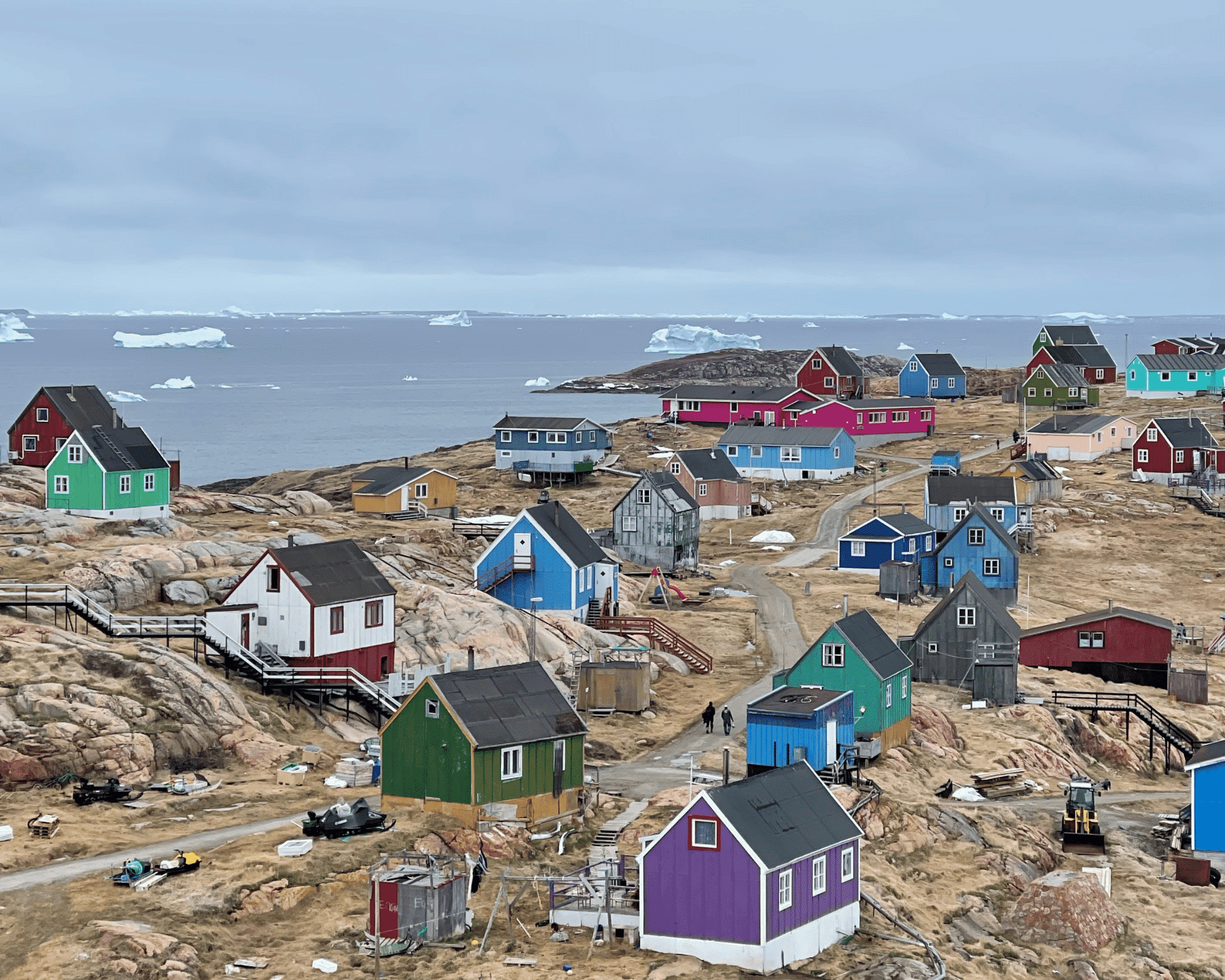 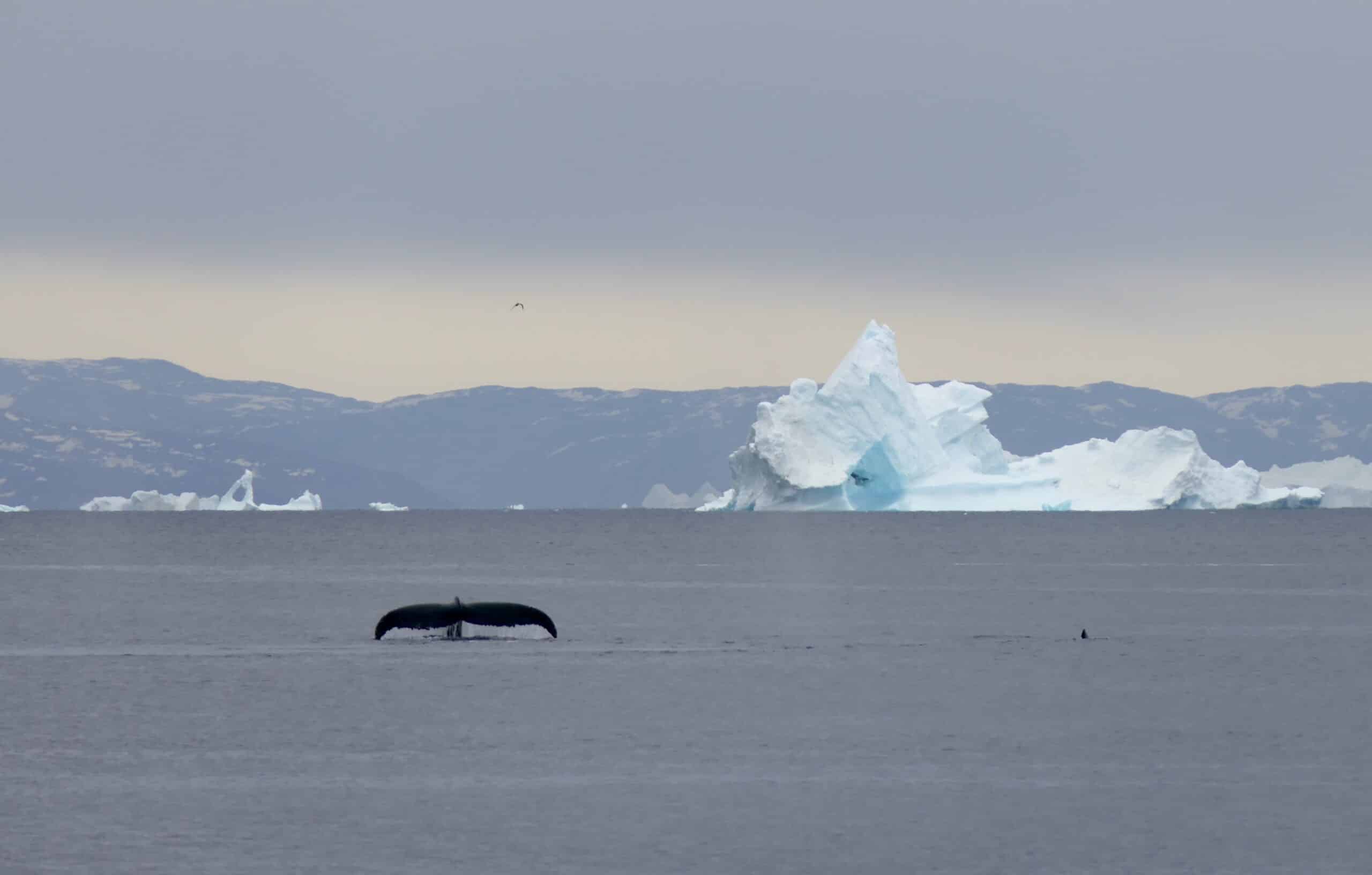 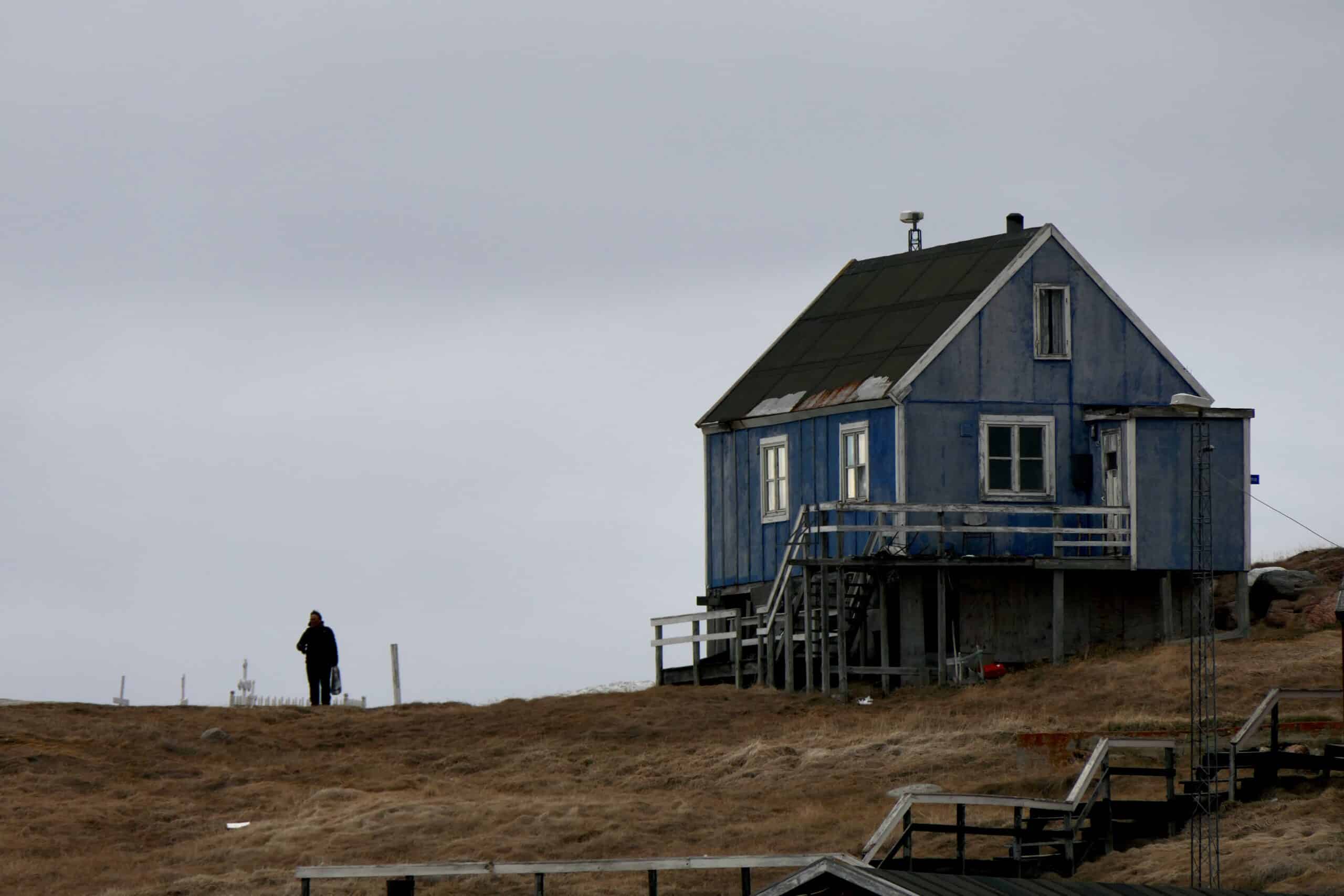 Nick and Estella met a man who serves as the town’s teacher, nurse, and clergyman. The number of sled dogs appears more robust than year-round residents, and they tug restlessly at chains as they wait for their season to return. We’ve learned that Greenland’s brightly colored houses are not entirely random: some colors correspond to professions and businesses, a system imported by Scandinavians. Red is for stores, and curiously also for churches. Hospitals are yellow, as are the homes of doctors and nurses. Fish plants and their employees typically reside in blue. Akunnaaq has just one house painted bright purple, and I wonder who claims that one. 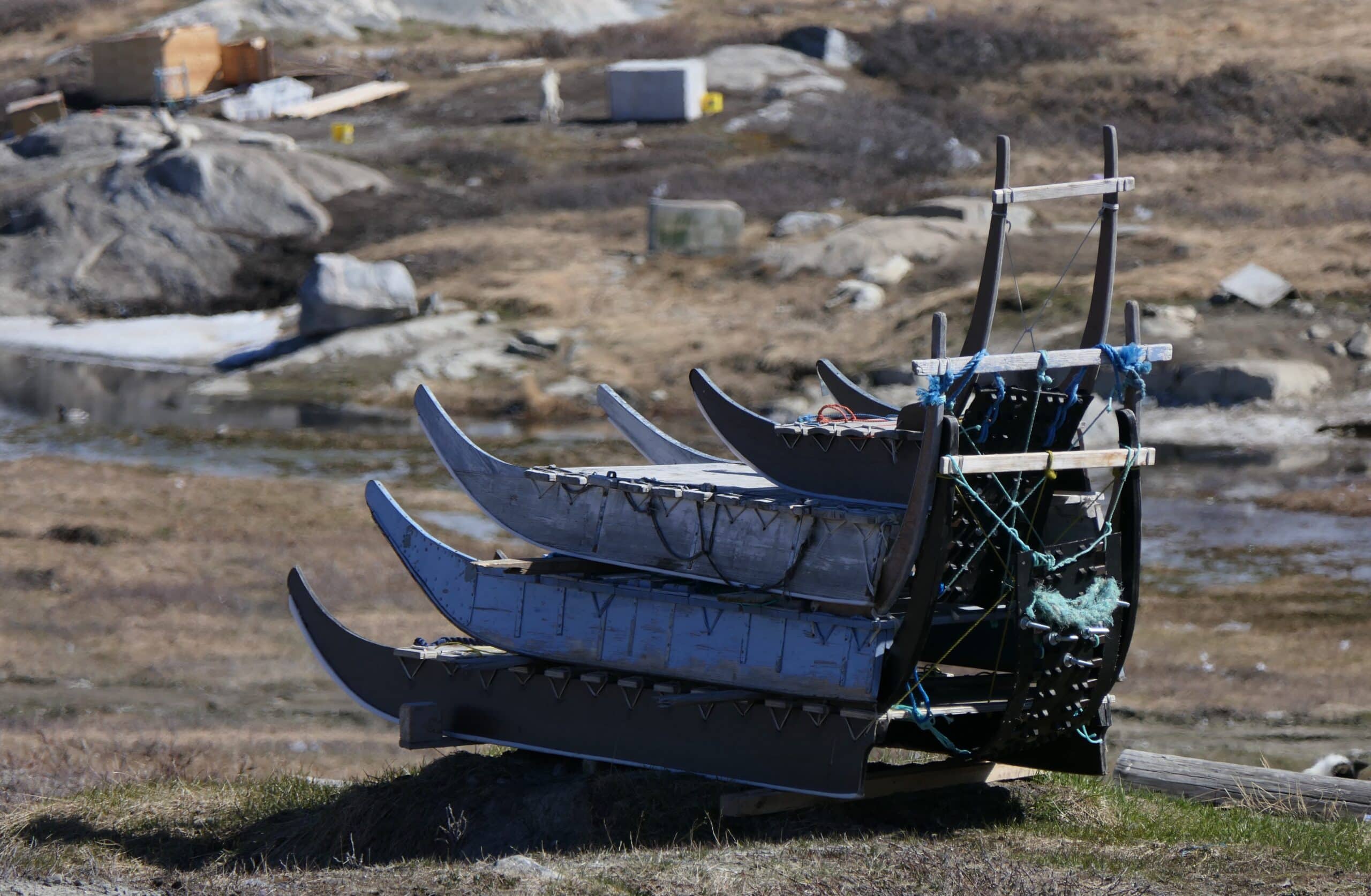 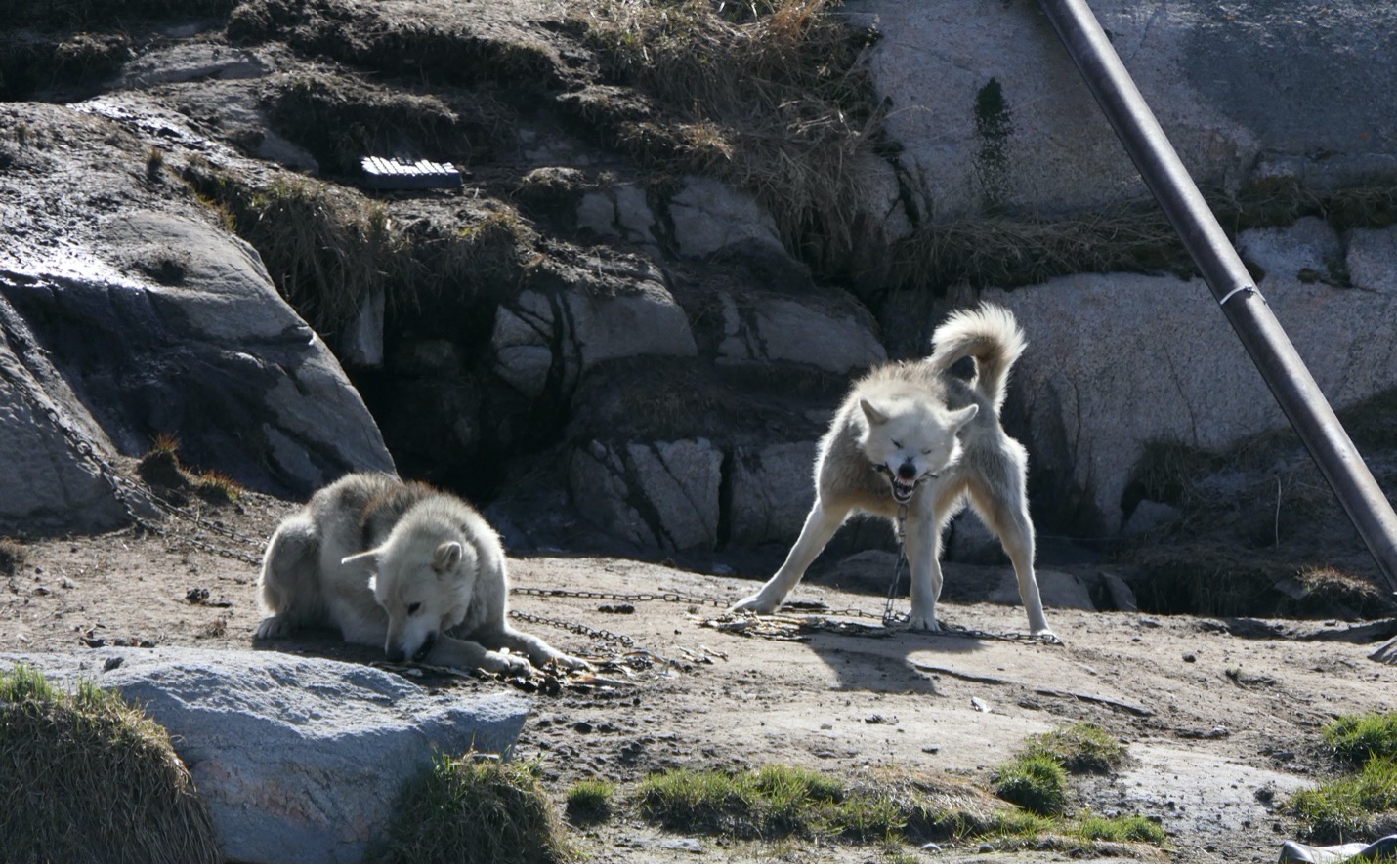 A stack of family dogsleds and the family sled dogs.

I curled up in a rolling bunk to rest during a cold passage across Disko Bay, watching the world pass by through a porthole. I stared for so long that when my eyes close I see it still: a circle of light split by the horizon, sprinkled with a roving herd of icebergs. Sometimes a shaft of sunlight illuminates a single iceberg on the horizon, a moment of grace. 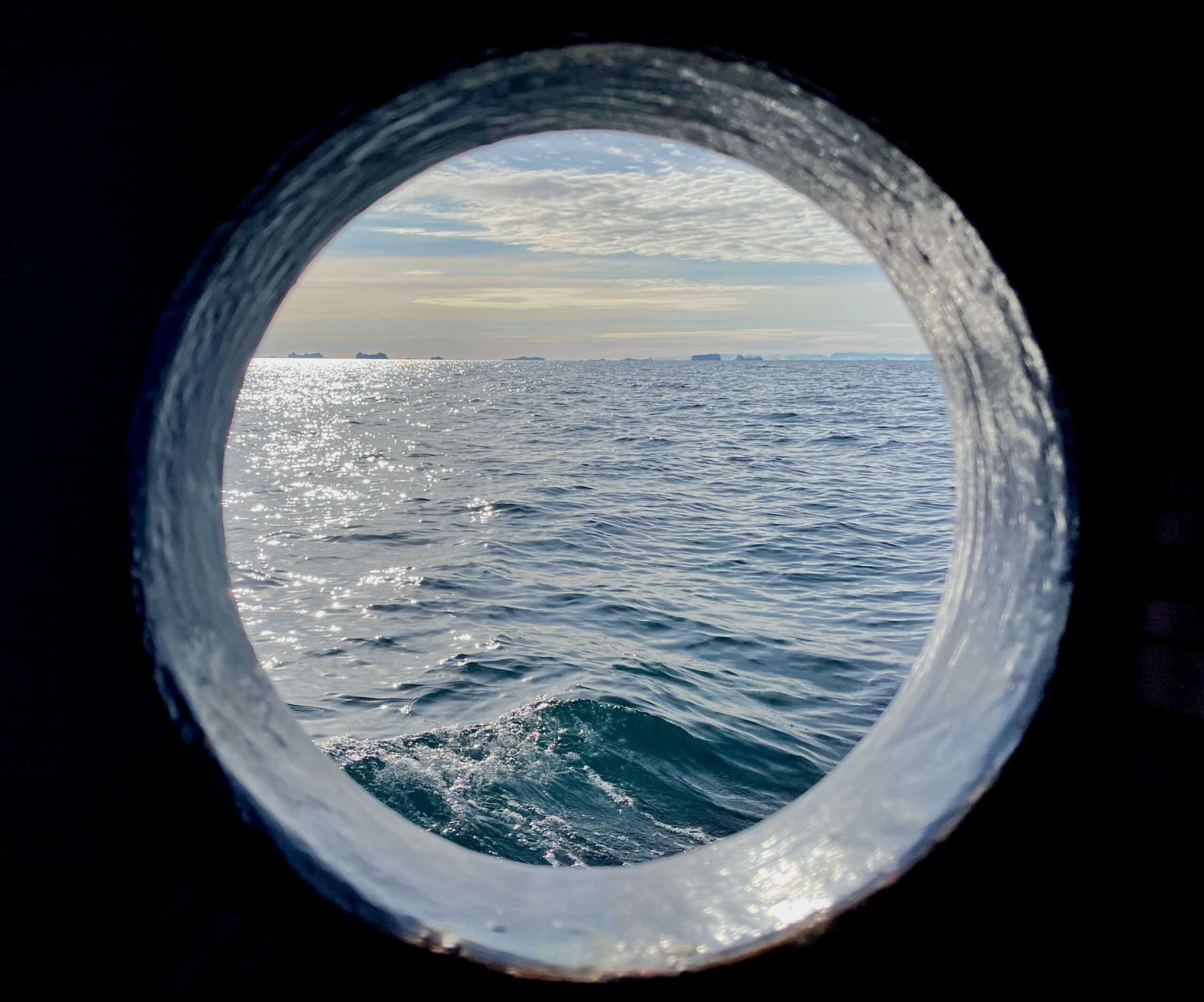 The view from a porthole.

We pressed on across Disko Bay in search of a settlement with a dock to address some mechanical issues on the boat. By evening, the basalt cliffs of Disko Island loomed over us, obscuring the well-hidden entrance to Qeqertarsuaq. Known in Danish as Godhavn, this town has a beautiful natural harbor tucked under steep cliffs, a perfect place to ride out a gale and make repairs. 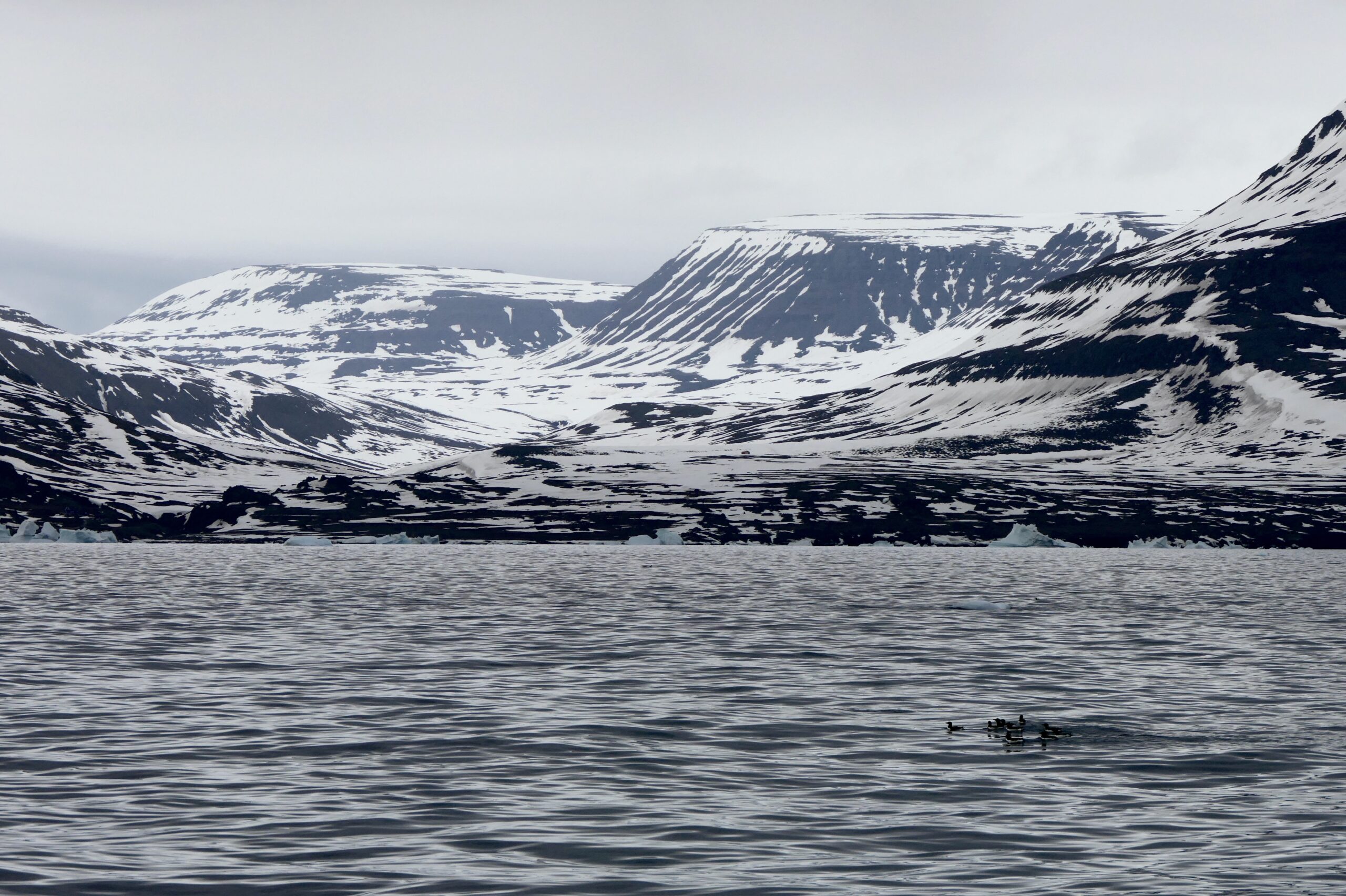 Next to Greenland itself, Disko is the largest island in the region, a rugged landscape with mountains over 6,000 feet high and a substantial glacier. Today we hiked to a cove that evoked Tolkien’s Middle-earth, ringed with waterfalls that pour into a translucent bay. Delicate meadows and basalt rock formations encircle Kuannit, Greenlandic for the flower angelica, whose seeds are warmed by nearby hot springs.

The town of Qeqertarsuaq is completely cut off in winter, due to unstable ice between Disko Island and the Greenland coast. By summer, a black-sand beach collects icebergs, which tower at the end of every street, as if waiting to be asked in for dinner. Descending toward town on foot, we emerge from snow flurries into a dazzling world of light. Sun sparkles on a broad path across the bay, illuminating icebergs, while silver threads of meltwater wind down bluffs toward the sea.

Disko Island is drawing billionaire mining speculation as a possible source of minerals required for the transition to cleaner energy sources. This feels ironic, of course, here in this rare and wild place, home to people who harvest food directly from the land and waters around them. Greenland has no private property. When I watch a fisherman spreading capelins out to dry on a smooth granite island, I assume he’s chosen this spot because it is well suited to drying fish, not because it belongs to him. Hunting and fishing continue to sustain these communities, despite the disruptions of climate change. 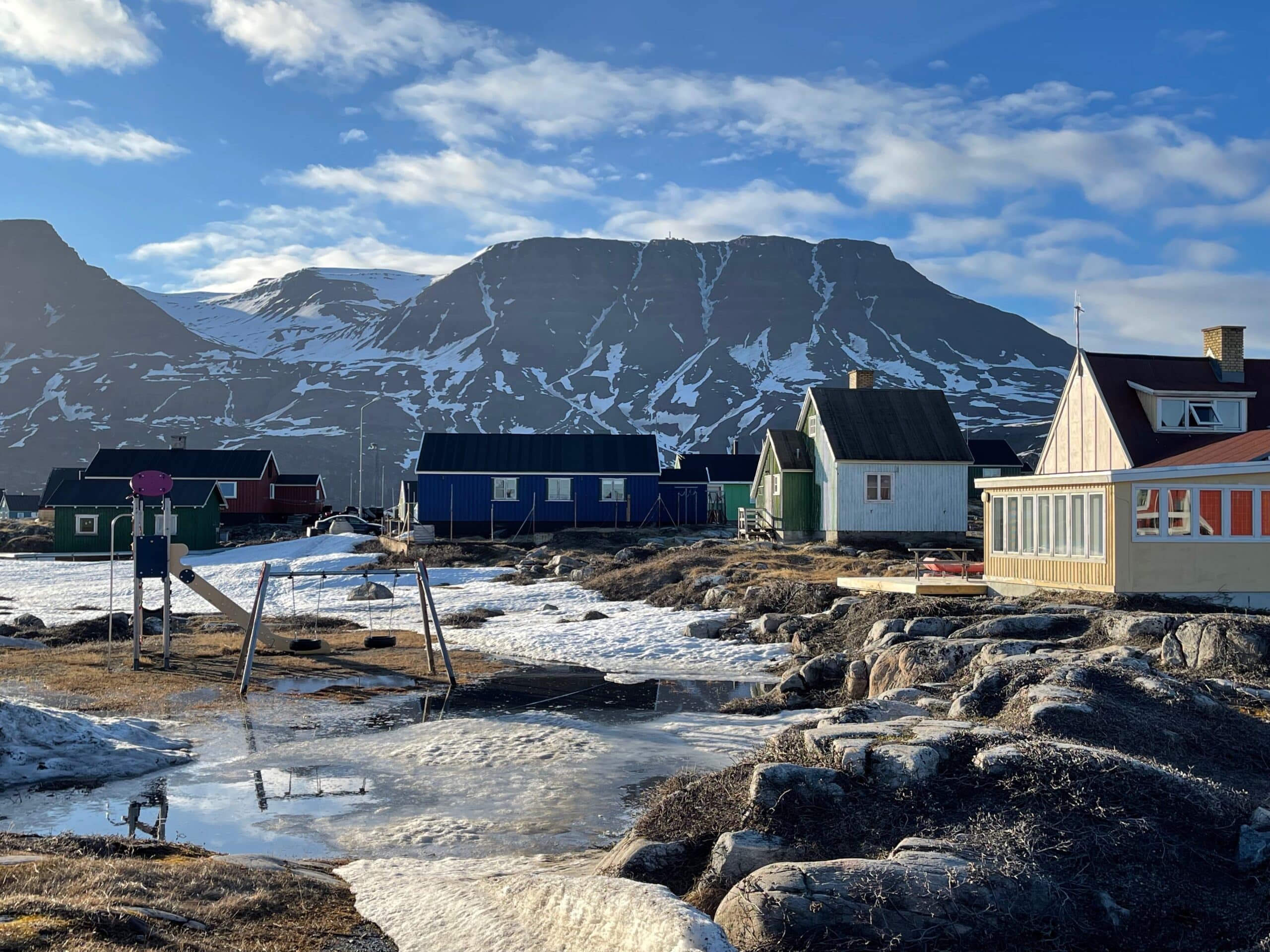 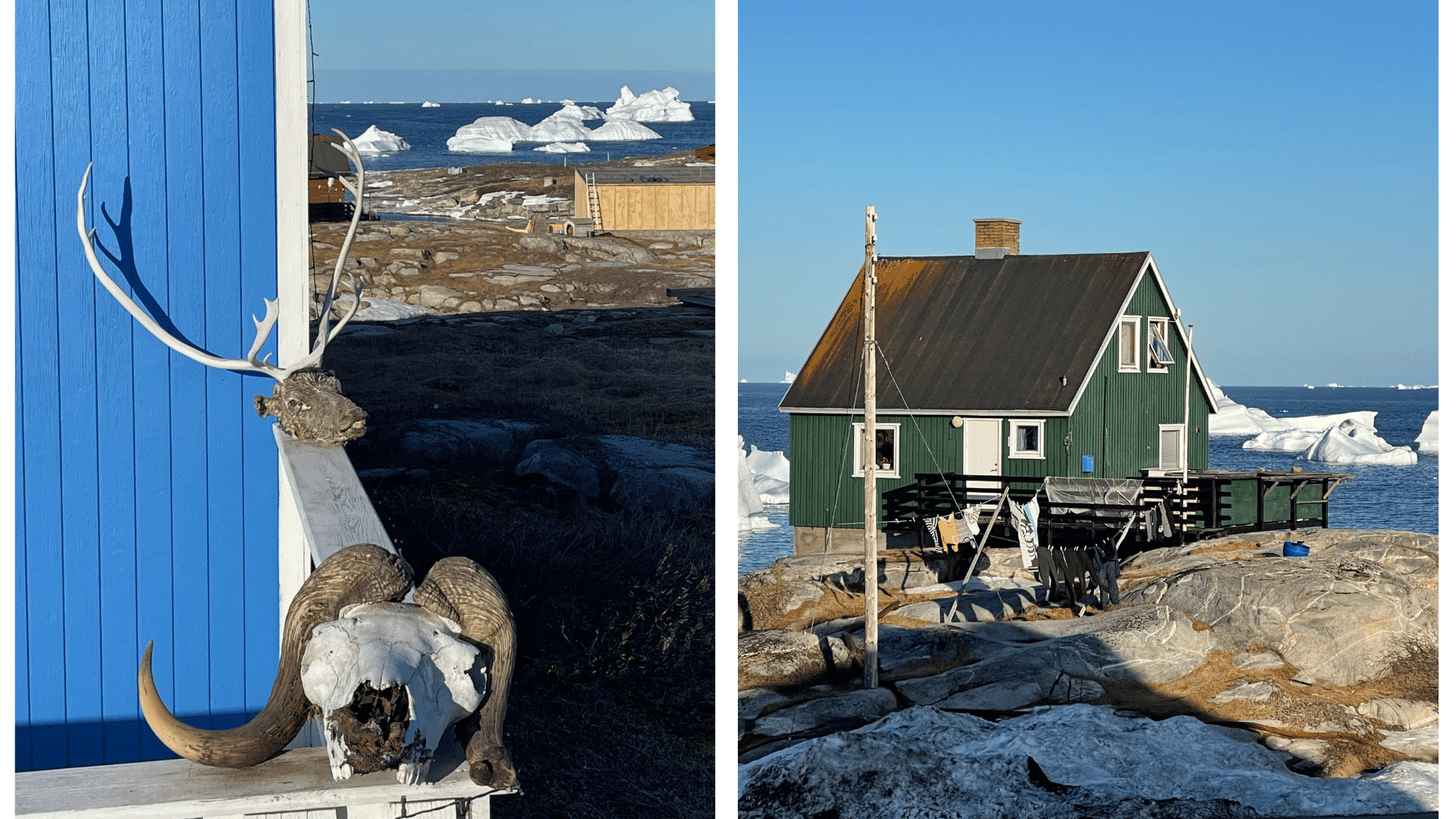 We visited a small museum in Qeqertarsuaq, and I was drawn to Inuit artifacts, among them an unassuming amulet carved from driftwood, a precious resource in a land without trees. It could have been the remains of a simple wooden doll, one without limbs. The Greenlandic docent explained that this amulet possessed strong magic, and that someone who could not handle its magic in their home gifted it to the museum. I long to hear more, to learn from people who know this environment intimately. I wish for strong magic to protect this place.

My first tantalizing glimpse of Greenland came from 36,000 feet up, traveling home from COP26 in Glasgow, with a report on the changing cryosphere tucked in my bag. It detailed how human choices are transforming the Arctic at a faster pace than anywhere else on Earth. This loss no longer feels abstract. We have been humbled and enchanted by ice, dodged it and drunk it. Disko Bay will be with us always, a memory of shimmering sculpture on the move, carried in by a rising tide. 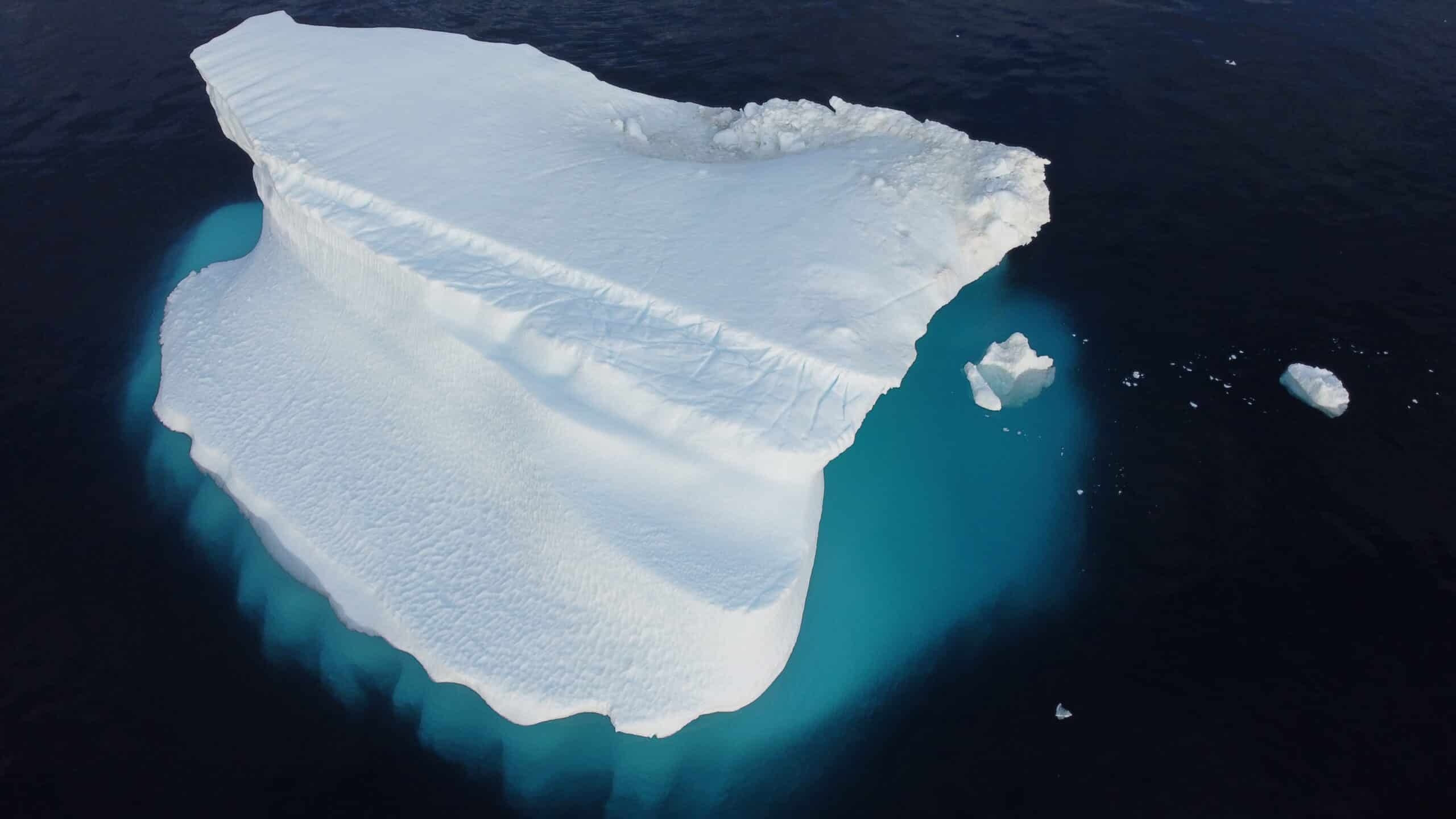 An iceberg as seen by a drone.

With special thanks to:

My father, Peter Plumb, whose persistent Arctic dreams brought us together, and my daughter Zia, who dreams of a future with a stable climate and healthy oceans. Thanks also to the crew of SkyDancer, Nick and Estella, who welcomed our family aboard.

The Ice at the End of the World by Jon Gertner

Bestiarium Greenlandica: A Compendium of the Mythical Creatures, Spirits, and Strange Beings of Greenland edited by Maria Bach Kreutzmann