DISASTERS TAKE OUR BREATH AWAY. When we are shocked by wonder or horror, our fingers shoot over our mouths as if to stop breath from falling out. When we say, Oh my god, you won the lottery, or an Oscar, or the neighborhood watch found your cat, or someone you admire is accused of something terrible, and the minute you hear it, you understand it could be true, or you see photographs of the siege of Aleppo or the drought in Madagascar or Uighur and Rohingya camps, you are stopped in your tracks. In Iceland, when the Fagradalsfjall volcano began erupting in March, people stood at the edge, gaping at the glowing lava, as if to see, was it really so? Breath has to do with believability. The more unbelievable something is, the more we reach for our mouths.

On April 20, Indian prime minister Narendra Modi addressed the nation, saying that the second wave of the coronavirus had hit us like a storm.

Tsunami. Typhoon. Toofan. Numbers that take your breath away. Over 400,000 infections a day. Thousands of daily deaths. People gasping outside hospitals. Mothers carrying their dead sons in cycle rickshaws. Wives giving CPR to husbands in autos. A young man outside a crematorium asking a photographer to take a picture of him with the fume in the sky, because that fume is his mother. Hospital signs that read: “We regret we are stopping admission in hospital because oxygen supply are not coming.”

The Nazis called the chemical they used to murder millions in their death camps Zyklon B. German for “cyclone,” Zyklon was developed as a pesticide by Fritz Haber, who had already created the devastating chlorine gas used in the trenches of WWI. In Benjamín Labatut’s stunning nonfiction novel When We Cease to Understand the World, he describes how the Germans praised Haber for “the extreme elegance of the eradication process.” Haber was Jewish, and was later forced into exile. His creation was used to kill members of his extended family and millions of others “who died hunkered down, muscles cramping, skin covered with red and green spots . . . the young ones crushing the children and the elderly as they attempted to scale the heap of naked bodies and breathe a few more minutes, a few more seconds, because Zyklon B tended to pool on the floor after being dropped through hatches in the roof.”

My brother was born a blue baby with three holes in his heart and had to have open-heart surgery when he was two. He survived. A friend choked on a piece of meat at a conference in Amsterdam and died. Cyanosis—a blue discoloration of the skin due to lack of oxygenation. The soldiers in Flanders in 1916 turned blue because of mustard gas, bodies covered in blisters, eyes blinded, throats closing up. Code word blue.

There is a Hindu creation story that has to do with breath. When blue-skinned Vishnu, reclining on the cosmic serpent Ananta, breathes out, the world is born; when he breathes in, the world is reabsorbed within him. Creation is the lotus springing from his navel in the form of Brahma, who makes the heavens and earth, giving birth to time, to us.

Breath is taken from us and we call it suffocation, from the Latin suffocare, “to be stifled, smothered, extinguished.” Breath is returned to us, and we call it resuscitation.

In between is another feeling, something the poet Ingeborg Bachmann described in her diary in the last months of WWII in Klagenfurt, Austria. She writes about the air raids, how the days are sunny and all she wants is to take a chair in the garden and read Baudelaire, how she’s not afraid even if it looks like the end of the world, but there’s a physical feeling when the bombs drop. “Something clenches up inside me,” she writes. “Perhaps it’s sinful just to sit and look at the sun. But I can’t go back down in the shelter any more . . . . it gets so stuffy it almost makes you faint. You’re not allowed to talk because of the air but still the dull, mute masses in there are unbearable. I find the idea of perhaps perishing down there with the lot of them, like a herd of cattle, horrifying. At least in the garden. At least in the sunshine.”

For weeks, there have been photographs of crematoriums in India working nonstop. Drone shots of Delhi on fire. An inferno. People dying on streets, waiting for oxygen cylinders, mouths opening and closing like fish out of water. Doomscrolling on social media, requests for plasma, ventilators, information, ambulances, help. Even if you were in a place of safety, you might have felt a tightening in your epiglottis, that flap across your trachea that either prevents or contributes to choking.

People with certain phobias, asthma, or those prone to anxiety are intimate with this inability to let go of one’s breath. But even those of us with solid hearts and lungs will have experienced breathlessness at some point. 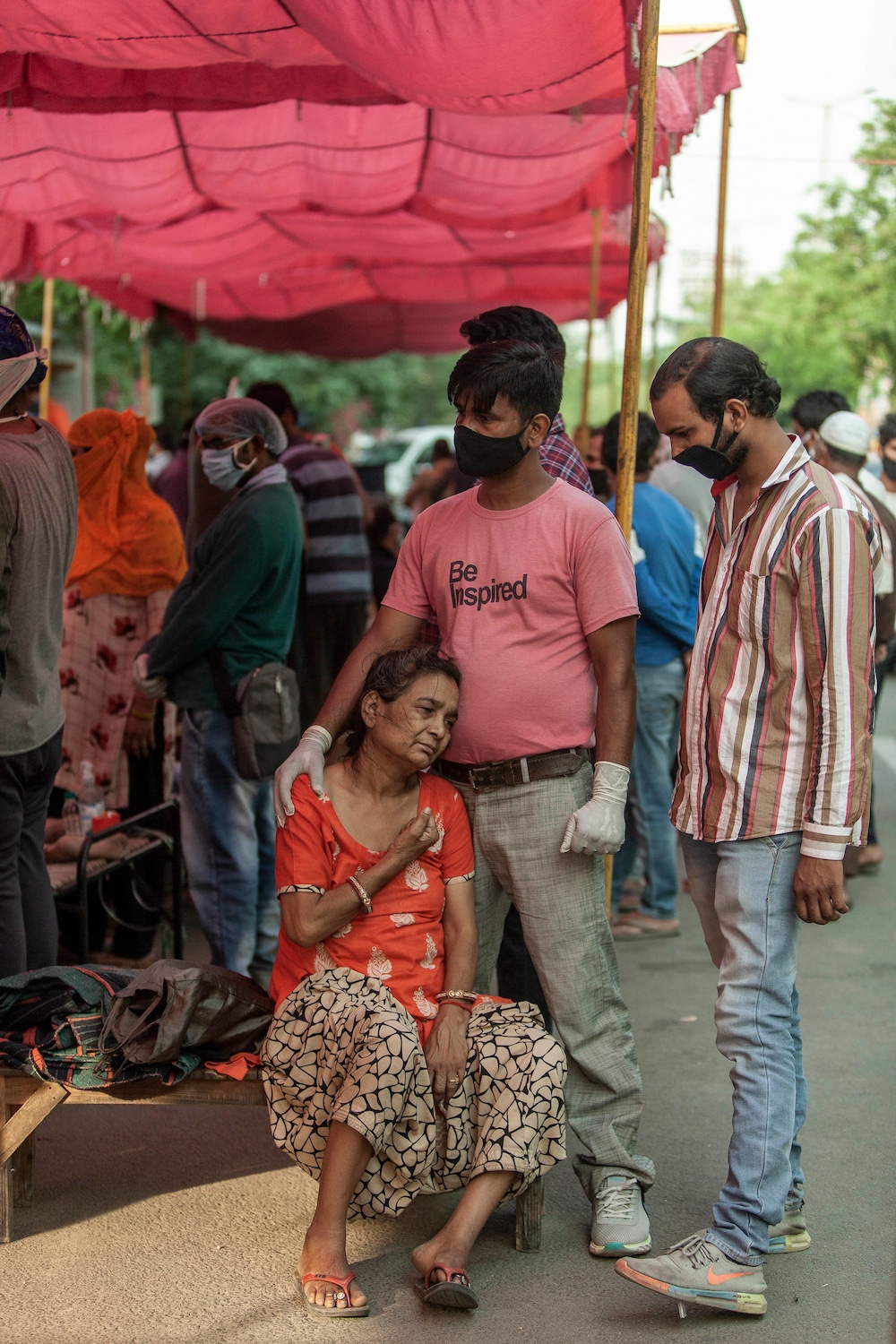 Over twenty years ago, in a dank swimming pool in Baltimore, as a graduate student at Johns Hopkins, I took a scuba diving class, thinking it would be a good backup career for a poet. But one particular maneuver undid me, the “buddy breathing” exercise—a situation where, if your cylinder empties, you motion to your buddy with a flattened hand, slicing it back and forth across your throat to signal you’re out of air. The buddy then passes you their regulator, and you take a few breaths before passing it back. Like this, you go back and forth. Those seconds when you don’t have oxygen are terrifying, even though it’s just an exercise. You must not panic. You must not rush to the surface, even though every molecule in your body wants to do just that.

For weeks, I’ve had a ghost feeling around my neck, gasping for a regulator. Seeing distraught families waiting outside hospitals, patients sharing beds and cylinders, knowing that a new supply of oxygen most probably will not be coming, that, for them, there’s no option of rising to the surface in synchrony.

In Tamil, there is a word—uyir, which means “breath, aliveness.” David Shulman’s masterful biography, Tamil, describes it as the innermost core of a Tamil person, the thing that connects the inside to the outside, individual to cosmos. The equivalent Sanskrit word might be prana. Yogis will be familiar with pranayama breath-controlling techniques. Like prana, uyir is not mere respiration, but life force. It’s what sets in motion the need to speak or sing, the cornerstone for language, existence, divinity. Most important, it has to do with the truth. Shulman writes that the notion of truthfulness is culturally determined—for the Greeks it was aletheia, “non-forgetting, unveiling, something no longer hidden.” For Tamils, truthfulness is linked to the spoken word, which, once uttered, must live out its life in the world.

I read Shulman’s book in the hills of Kodaikanal, Tamil Nadu, 115 kilometers from Madurai, the epicenter of the Pandya dynasty, where, over a thousand years ago, the Sangam poets sung lines that are still echoing across to us today:

If one can tell morning
from noon from listless evening,
the night of sleeping towns from dawn
then one’s love
is a lie . . .”

Love can take your breath away too. Hearts can skip beats. The idea of uyir might sound like spiritual mumbo jumbo with its notions of harmony and the breathing world, but we know that our bodies are dead stars, don’t we? We know that, every time we breathe, we are inhaling molecules that were previously exhaled from every other human who has ever lived. That we are interconnected across breath and time and space, which is why, even though our lives may be historically short, we are still part of eternity. We know that the hardest part of the contagion this past year has been that we are vulnerable because of the very thing that connects us: our breath.

When we say we want to catch our breath, or someone tells you to save your breath, there is a division between body and uyir. When an Indian chief minister threatens to file criminal cases against people who use Twitter to appeal for oxygen because, according to Solicitor General Tushar Mehta, “no one in the country was left without oxygen”; when social media posts are removed for being critical of the government’s handling of the crisis and people are instructed to spread positivity; and when journalists are told not to behave like vultures even though they’re just doing their jobs, we can say that uyir on the personal and national level has become endangered.

People have been finding ways to cut off other people’s uyir forever. Hemlock. Mustard gas. Sarin. The Third Reich kept its people blitzed out on a steady supply of amphetamines during the war, but their leaders had an exit plan. Cyanide pills were handed out liberally. A high dose of cyanide is cruel, efficient, seizing your breath in one to three minutes. The Indian government has blitzed its people with religious festivals, election rallies, cricket matches, and cow urine, proclaiming the war against corona won. But the Indian leaders have no exit plan. For weeks, the country has been sounding an ominous death rattle that promises to get louder and louder. Our hands are over our mouths.