EARLY ON, there was no word for “groundhog.” Neither were there groundhogs, or grandmothers, or event coordinators. There were events but they were uncoordinated like the Tunguska Event. There was nothing, but no word for it. In some ways it must have been nice, all that wordlessness, because sometimes now you meet somebody and all you can think is, Please stop talking. Our planet has become so much wordier than the other planets, although there are respites if you hang out with eagles or angels. Eagles never explain anything, and angels are no more voluble than they are visible: visibility is not their shtick.

But once in a while you meet a visible voluble being and you think, Please do not stop talking. This would never happen on Neptune. Also, with all the flowers and words for flowers, we can indulge in wildflower gossip, about how the golden alexanders are bolting, how the tansies are being insubordinate again, how the mad apples are creeping up on the obedient plant, how the purple archangel was boogying in the wind last night. (The purple archangel is anomalously visible.)

Once, I found a book of piano music by Brahms and played an intermezzo slowly, very slowly, lentissimo. I thought it sublime at that tempo, but later I heard someone on the radio playing the same intermezzo fast, fastissimo—she could have played it four times while I played it once. In this case it took four fasts to make a slow. When my father was nine, his parents had him sing “The Holy City” for church, accompanied by his four-year-old brother, Danny, pumping the pedals of a player piano. At first the song rolled right along, but then, as Danny got tired, he pumped the pedals more slowly, and Benjie had to sing more and more slowly until, right in the middle of a word—“Jerrr-ru-u-u-sa-le-e-mmm, Jerrr-ru-u-u-u-u-u”—the song stopped, and the congregation roared with laughter. Then Danny got a burst of energy again, and the song resumed and slowed down again and stopped again.

How fast is time? What is time plus time?
How many jiffies in an hour, how many soons in an afternoon?
How many fasts does it take to make a slow?

Time can seem just that erratic, with prestissimo, lentissimo, and us always having to scramble to keep up or slow down to a mortifying pace. But slow or fast or spasmodic, a song always ends. An hour is like a song in that it ends. For a while there were a lot of Triassic types going around. Montesquieu made a name for himself, as did mosquitoes. The tribes of the Warm Springs moved from their winter village to their summer village and back. Passively the icicles grew, passively they melted. Some people lost their good reputations, some people lost their canoes. Some cowboys lost their cows and then they were just boys. Nations formed, nations raged; meanwhile the giraffes were so well behaved we forgot all about them. Some people, you could tell, spent their evenings reading pamphlets entitled Why Won’t They Listen? Punctiliously the clocks kept ticking. There was a rolling hello as people appeared, and a rolling goodbye as they disappeared. The generality was perpetually replenished, but you don’t really say hello or goodbye to a generality.

For all the things that did happen, many more things did not happen. Many people did not appear; many people appeared but did not flower; Meister Eckhart flowered but did not drive a Maserati. The event that flattened all those trees in Tunguska did not flatten the folks in Delhi or Quito or Winsted, Connecticut. Even after Maseratis appeared, they did not impinge on some people’s consciousness, just as nuthatches do not impinge on some people’s consciousness. Some people never got around to reading Moby-Dick, so they never realized that everything in their lives had been preparing them to read Moby-Dick.

And all this happening and non-happening has brought us to the present hour, when you have cats running around younger than churches and trees standing there older than churches. And we are still innocent of time. After all this time, to be innocent of time. Though maybe there are some things you can’t realize until your name is Grandmother, like the tempo of time, like those grandparent types who go around insisting, “It goes so fast.” Maybe all those slows add up to a fast. Maybe it’s like we’re sitting in the garden with our little cups of water and some excited person keeps rushing around telling us, “Water is blue, water is blue, can’t you see, water is blue.” But we peer into our cups and the water doesn’t look blue—it looks clear, like a good little diluter. We add it to our whiskey, we add it to our milk, and they get clearer, weaker, waterier. There is just one thing that water does not dilute, and that is water. Water plus water plus water is blue. Sinking down, you see how very blue. 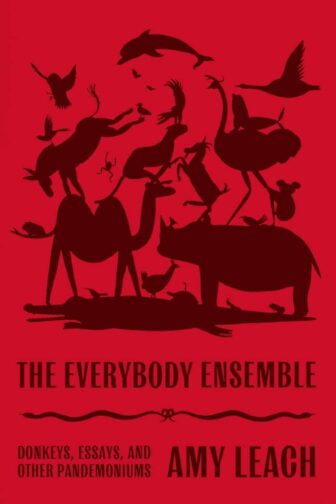 Excerpted from The Everybody Ensemble by Amy Leach. Published by Farrar, Straus and Giroux, November 16, 2021. Copyright © 2021 by Amy Leach. All rights reserved.