Speculative fiction is an unfixed term for a genre broad enough to encompass the work of Margaret Atwood, Ursula Le Guin, Kazuo Ishiguro, Octavia Butler, and Jorge Luis Borges. Readers and authors have long debated what constitutes a work of speculative fiction. Answers vary widely, but what’s nearly always agreed is its existence as an in-between space. If you imagine a venn diagram of Science Fiction, Fantasy, Alternate History, and even Horror, you might see speculative fiction squarely in the middle, dipping its toes comfortably into each neighboring circle. It’s all about conjecture, so it makes sense the term should cast a wide net.

Perhaps an easier definition would be to say that speculative fiction seduces our imagination. It enables us to consider questions and possibilities that non-fiction cannot, and, perhaps more importantly, enables us to consider answers to questions that non-fiction cannot. After all, speculation is meant to dispel the idea of fixed knowledge. And where discussions of reality fall short, speculative fiction seems to excel. Why not consider what it would feel like to exist inside of a plant, an animal, or on a planet with a belligerent climate? When we impose what we know onto what we don’t know (often what we can’t possibly know), we’re able to illuminate the ways in which we make sense of the world. When we consider realities and questions that push the limits of our comprehension, the world will always come back into focus. In fact, it often comes into focus more clearly.

It can often feel insufficient, even dread-inducing, to think about how the environment is represented through fiction. It doesn’t help that the vast majority of speculative environmental fiction leans towards dystopia. Desolated versions of future earth, plots against humanity, impossibly selfish societies all permeate this genre. It’s for good reason; these are exaggerations of what we already see. They’re meant to serve as a warning. But, as Aya De León discussed in her interview with Orion this fall, it can be nice to see heroes too. There are plenty of stories that do just that, such as Aya’s own The Mystery Woman in Room Three, but you have to be willing to look for them.

The books that I’m going to recommend are not intended to discourage addressing environmental issues and questions through the lens of reality. Rather, these recommendations are intended to serve as a reminder of the rich history of speculative fiction and its ability to persuade. They might make you feel less afraid, more inspired, more in awe. Or they might induce a sense of despair, a moment of dread. There has always been value in both. There will always be value in both. 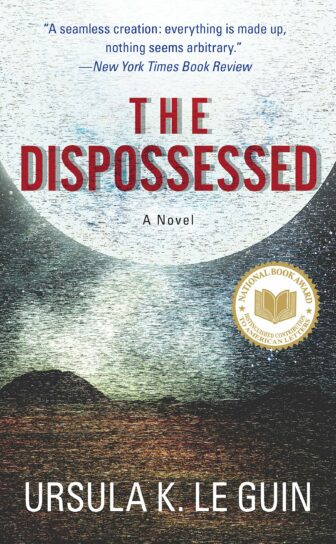 An engrossing tale by one of the greatest writers to live, The Dispossessed follows the genius physicist Shevek as he leaves his home planet Anarres, a moon settled by utopian anarchists, to travel to his people’s mother planet of Urras. Shevek’s mission is to complete his General Temporal Theory, which might unlock travel faster than the speed of light and other scientific miracles. The story takes place across two timelines, following Shevek in his present and his past, showing us why he was forced to abandon his home for the pursuit of scientific enlightenment. Ultimately Shevek finds that the Urras he has fled to, the planet of war and poverty and unfathomable wealth, is no friendlier to his work than the place from which he has run.

The dichotomy of a planet of anarchists, a planet of unimpeachable equality where even the idea of ownership is discouraged, with a rich and corrupt planet that more closely resembles our own, is unsettling and on the nose. Even the grammar and syntax of Anarres have evolved to reflect the ethos of equality, whereas Urras is unilaterally a place of individuality. The book forces us to consider major social reorganization, what it means to define a utopia, and how knowledge and science can be “owned.” And the book poses a set of questions. Can an idea be so powerful, so important, that it can transcend human selfishness? Is equality of knowledge the answer to social and environmental issues? Brilliantly wrought in lush cityscapes, sterile rooms, barren planes, and calmly articulated in Le Guin’s unhurried and succinct prose, The Dispossessed feels as pertinent and poignant nearly fifty years after publication. 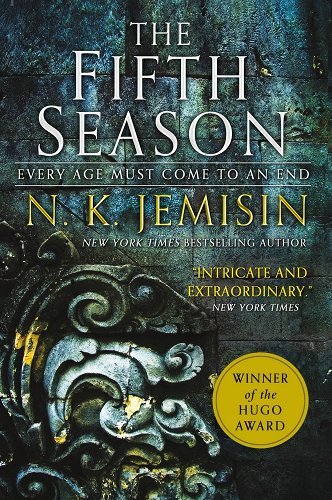 The Fifth Season by N.K. Jemisin

The first installment in N.K. Jemisin’s Broken Earth Trilogy, all three of which won the Hugo Award for Best Novel, The Fifth Season follows a host of characters navigating cataclysmic environmental conditions on a planet home to a single supercontinent called “The Stillness”. On this planet, the conventional “Mother Earth,” nurturing, kind, and gentle, has been supplanted by a “Father Earth” who is a hostile, antagonistic entity that is intentionally trying to harm humankind, mostly through earthquakes and other seismic activity. There are second class citizens who can quell earthquakes and perform sorts of magic. There are cities and towns warring for scarce resources. And, in the most viscerally apocalyptic way, there are year long, decade long, sometimes century long winters as a result of Father Earth’s malice.

The evocation of our current climate issues is unavoidable. The magic of the book rests heavily on the physical construction of its world. We not only see but we feel these treacherous landscapes. The book also posits an unconventional relationship with history. Any previous societies are derogatorily referred to as “deadcivs”; their failure to survive is all that is relevant in a world in which only survival matters. Most interestingly, though, the book begs the question of consciousness on a planetary scale. How might we consider something as big as a planet to have agency rather than reacting on a cause and effect basis? What if this shaped a new understanding of our own earth? How might we interface with our planet differently if we considered it a consummately living entity? Littered with conceit and unfathomable twists and turns, The Fifth Season is as thrilling to read as it is philosophically inspiring. The best part—the second and third installments of the trilogy are equally as riveting. 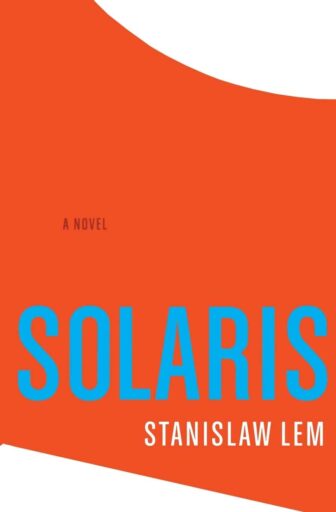 An iconic work of science fiction, Lem’s Solaris tracks the psychologist Kris Kelvin as he arrives at a research station on a foreign world. The titular planet, Solaris, is covered in a vast ocean that exists as its own unique form of extraterrestrial life. The locus of the novel is highly focused, occurring entirely on a singular, alien location that itself champions a single idea. This unknowable, living ocean interacts with the researchers, creating apparitions and constructions that defy the known laws of physics, and pushes the readers comprehension of what defines life. The novel’s preoccupation with the planet blurs the line between the religious and the scientific.

There is an eeriness to reading Solaris that is reticent of the researchers’ own experiences of being somewhere they perhaps do not belong. Spooky is a word that often comes to mind while turning the pages. Where the novel excels is in checking the ego of humanity as a collective, and in examining our humanistic response to things which we don’t understand. The researchers wrestle with destroying the ocean, interacting with it, surrendering to it. They question the privilege of their own consciousness. What if touching the surface of this ocean felt no different to that entity than touching another human’s skin? What if plucking a leaf from a tree caused a sensation no different than plucking a hair from a head? Solaris encourages us to reconsider scientific doors that perhaps seem closed, and it excites and terrifies us at the possibilities that consciousness itself might hold. 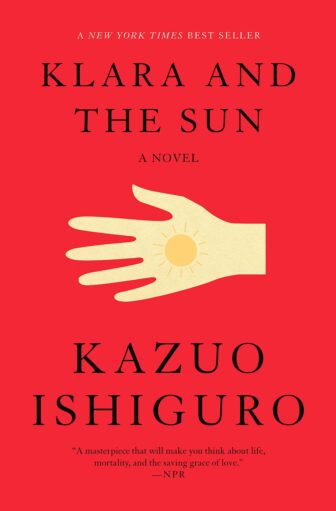 Klara and the Sun by Kazuo Ishiguro

The eighth novel of a Nobel Prize winning author, Klara and the Sun is narrated in the first person by Klara, an “Automated Friend” who is purchased by a sick and lonely fourteen year old girl named Josie. We come to know and understand this world, a not too distant version of our own, through the thoughts and exceptional observational capabilities of our non-human narrator. It’s an earth where mass “substitution” of workers by machines and AI’s has transpired, where “lifted” children whose intelligence is genetically enhanced learn at home on “oblongs” (It’s difficult here not to picture an iPad), and where the cross-roads of a seemingly inevitable future comes to light. Klara, who is duty-bound to Josie not as a servant, nor truly as a friend, but perhaps most aptly as a companion, seeks to save her from death and loneliness through any means she can.

In its themes and setting, the novel feels simultaneously an arms length away and lurking at our shoulder. It’s in turns frighteningly direct in critiquing our social trajectory, and startlingly innocent, naive almost, in its examinations of love, friendship, and belief. Klara, who is solar powered, worships the sun as a transcendent entity. She communicates with it and acts upon its perceived will through a contract others, not even the reader, can hope to fully understand. It feels child-like, irrational even, yet it also pushes us to re-examine our own relationships with nature, logic, and reason. The novel excels in equal parts with what it says and what it leaves to our imagination. We know almost nothing of our protagonist’s appearance. She has short dark hair, yes, but to what extent is she distinguishable from a human? Strangers seem to mark her as a machine, but exactly how remains unclear. The broader world, too, lives behind an imaginative film. We pick up bits and pieces, but we’re contained by Klara’s myopic perspective. This feels appropriate for a book that is so reflective of our present concerns. It’s a cup that Ishiguro lets us pour ourselves into—our hopes, our questions, our fears of what’s to come.

William Ziebold is Orion’s Digital Editorial Intern. He is completing an M.F.A in Creative Writing with a concentration in Fiction at The New School on a Provost’s Scholarship. His work has appeared in Honi Soit, Orion, and C.R.A.V.E. He lives in Brooklyn, New York.