1. The first taxidermy jackalope hoax mount dates to the 1930s.

TRUE. Doug and Ralph Herrick, of Douglas, Wyoming, made the first jackalope mount during the Great Depression, when they were just teenagers. They sold it for $10 to a local businessman, who displayed it at his hotel bar, where it soon became the talk of the town. The jackalope would go on to become the most iconic and beloved taxidermy hoax in the world.

2. The jackalope is usually made with the head of a jackrabbit and the horns of an antelope.

FALSE. Despite the animal’s legendary moniker—a portmanteau of jackrabbit and antelope—the jackalope is often made from the head of a cottontail, and mounts are rarely fabricated using the horns of a pronghorn antelope, the wider availability of deer antlers making them the preferred choice. To complicate matters, the jackrabbit (genus Lepus) is not a rabbit but rather a hare, while the pronghorn (Antilocapra americana) is not an antelope but instead an artiodactyl ungulate indigenous to North America—the sole survivor of a dozen fantastic Antilocaprid species that, before the sweeping wave of Pleistocene extinctions broke over them, roamed the territory jackalopes now inhabit.

3. A group of jackalopes is called a “herd.”

FALSE. A group of horned rabbits is a “band,” “pack,” “jump,” “committee,” or “flagerdoot” of jackalopes.

4. Jackalope milk is reputed to be a potent aphrodisiac.

TRUE. It is also true that the jackalope doe sleeps belly up, which might seem to make obtaining the milk a simple matter. However, the doe is fierce when disturbed, and few who have attempted to milk a jackalope have escaped to tell the tale.

5. Jackalopes often join in with campfire songs, singing the bass part in harmony with cowboys and campers.

FALSE. Although it is widely acknowledged that jackalopes are fine singers and do often join in the singing of campfire ballads, they invariably contribute the treble part to the harmony.

6. Jackalopes are rare because they mate only during lightning storms.

TRUE. This highly selective breeding ritual radically limits opportunities for procreation. Once a storm begins and bolts crash on the open prairie, the jackalope rises up onto its hind legs, lifts it forepaws, and cavorts erotically in a pirouetting dance that initiates mating. 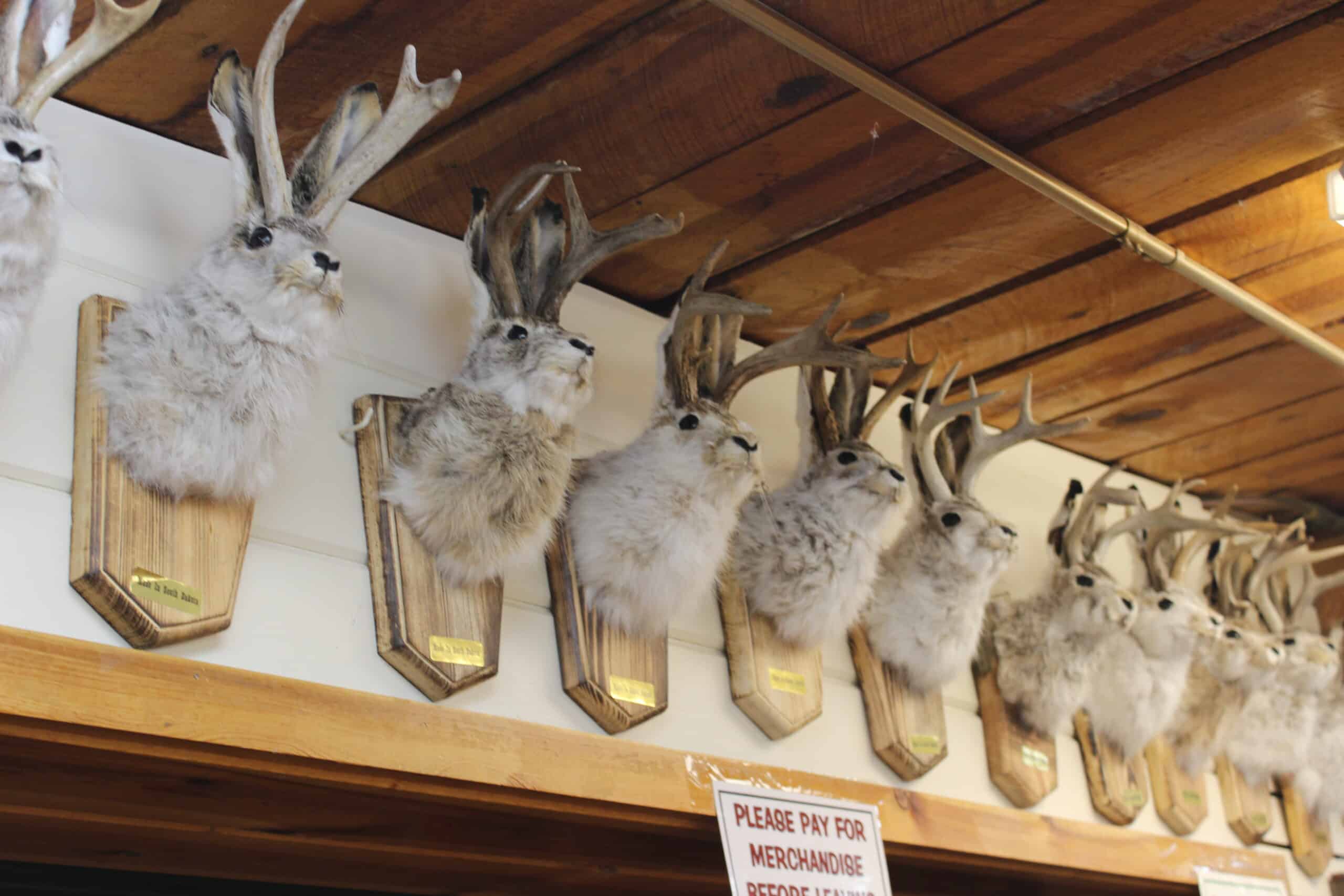 7. Taxidermists Frank and Dianne English have made almost 100,000 jackalope mounts.

FALSE. The Englishes have made far more—more than 200,000 jackalopes—all in the basement of their suburban home in Rapid City, South Dakota.

8. The Odessa Jackalopes are a team in the North American Hockey League.

TRUE. And that’s not all. We’ve got Jammin’ Jackalopes playing frisbee in Pennsylvania, Wild Jackalopes running in Denver, and Sand Jackalopes spiking volleyballs in Houston. There are skateboarding jackalopes, mountain biking jackalopes, amateur baseball jackalopes. You can visit Reno to catch the Jackalope Triple Crown fencing competition, or work on your competitive axe- throwing at Spokane’s Jumping Jackalope gym.

9. The horned rabbit has often been a subject of artistic representation.

TRUE. Images of horned hares appear in illustrated manuscripts dating to the thirteenth century. You can find them in the Louvre, Prado, British Museum, National Gallery of Art, and other repositories of fine art around the world. 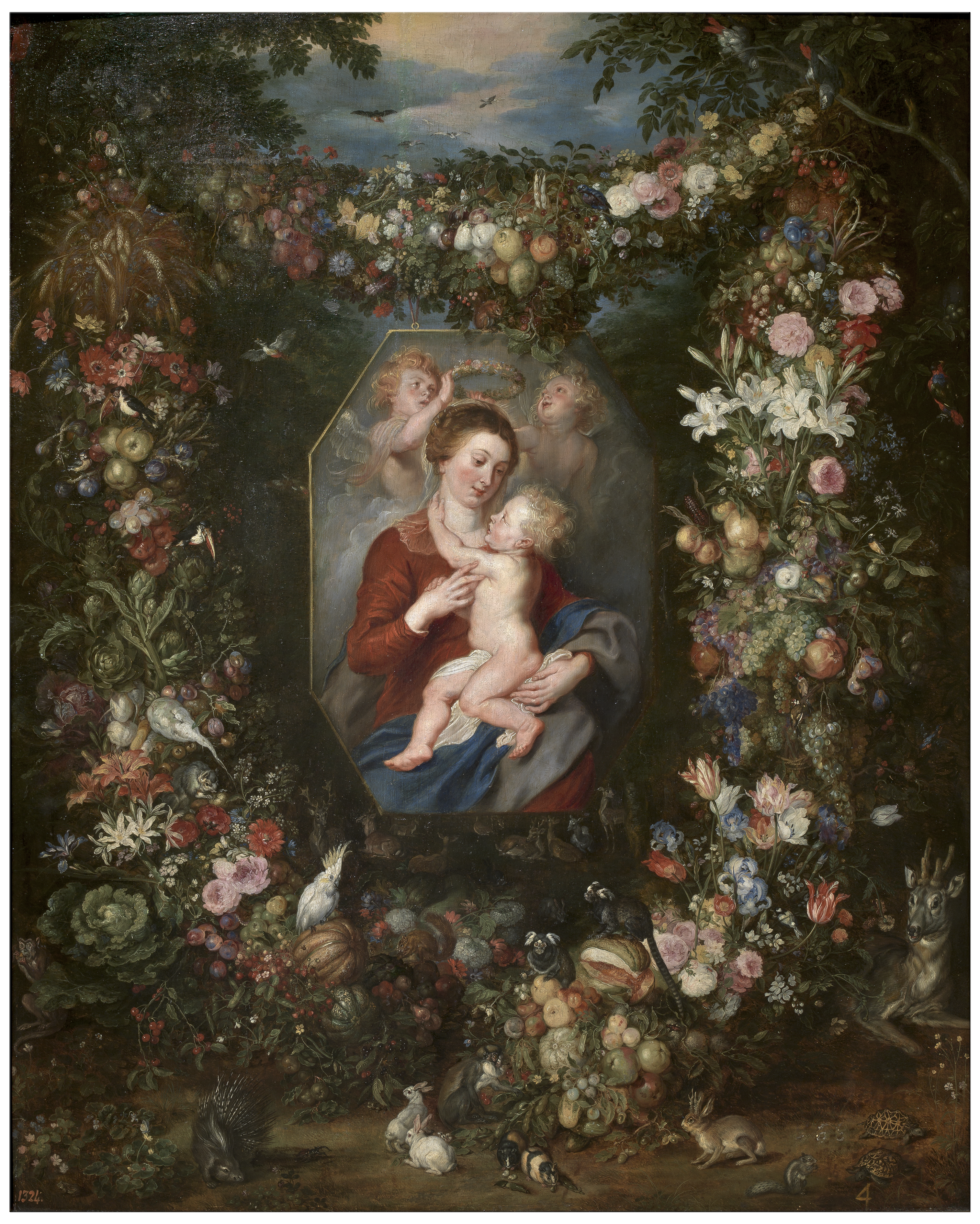 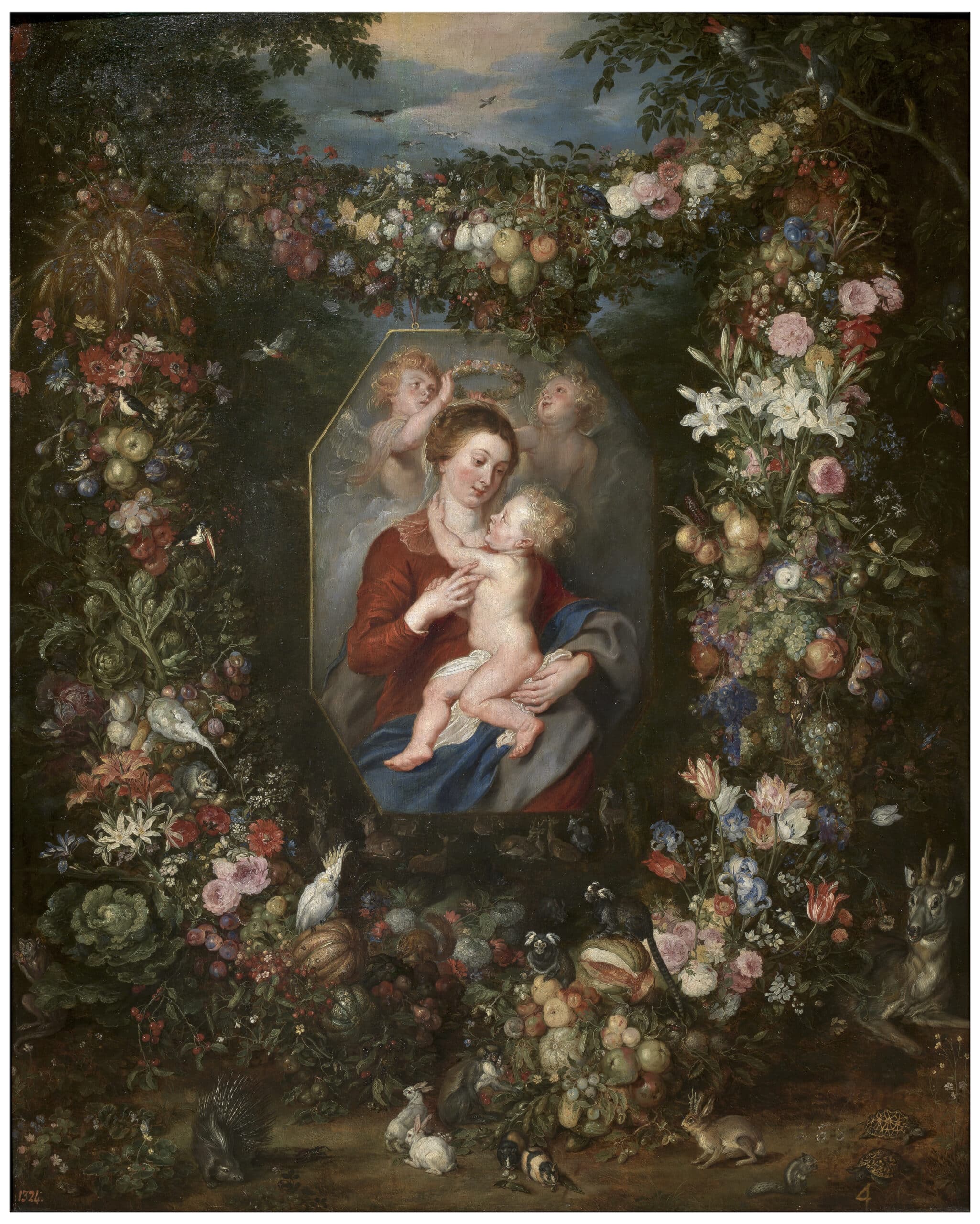 Look who’s visiting Flemish painters Jan Brueghel the Elder and Peter Paul Rubens’s exquisite The Virgin and Child in a Painting Surrounded by Fruit and Flowers, circa 1617.

FALSE. “Jackalope Rising” is a little-known song by San Francisco Bay Area death rockers The Phantom Limbs, whose “song” consists of a ten-minute cacophony of feedback and cymbal crashes intercut with sampled Orson Welles dialogue. You can experience this and scores of other jackalope songs here.

11.Buddha invoked the horned rabbit as a teaching tool to help his students ponder the nature of reality.

TRUE. In three Buddhist sutras—the Surangama, Platform, and Lankavatara—Buddha offers the horned rabbit as an allegory of that which does not exist. But, in koanlike fashion, he also suggests that the very fact that we can imagine a horned rabbit also means that there is an important sense in which it does exist. Chastising some philosophers for having “fallen into the dualistic way of thinking,” Buddha proclaims, “The hare’s horns neither are nor are not.”

12. Jackalopes have been the subject of erotica.

13. There is a strain of cannabis called Jackalope.

TRUE. This type of weed, which is a cross between the Chocolope and Black Jack strains, is said to taste of berries, sweet chocolate, and vanilla bean.

14. The jackalope is a unique species that is endemic to the American West.

FALSE. Jackalope precursors and analogues are found in the folklore of cultures from around the globe. Their cousins include kauyumaris, ňwampfundlas, rakanins, skvaders, dilldapps, hasenbocks, rasselbocks, oibadrischls, rammeschucksns, and raurakls. Prominent among these relatives is the Bavarian wolpertinger, a beast that has the head of a rabbit and the antlers of a roebuck, but also sometimes the wings of a pheasant, and/or the fangs of a dwarf boar. Bavarians are extremely proud of the role the wolpertinger plays in their cultural identity.

TRUE. The “horn” of the rabbit is a keratinous carcinoma caused by infection from Shope papillomavirus. Horned rabbits captivated European naturalists during the medieval and early Renaissance periods, and for several centuries the creature was taxonomized as Lepus cornutus, which was incorrectly thought to be a distinct species. 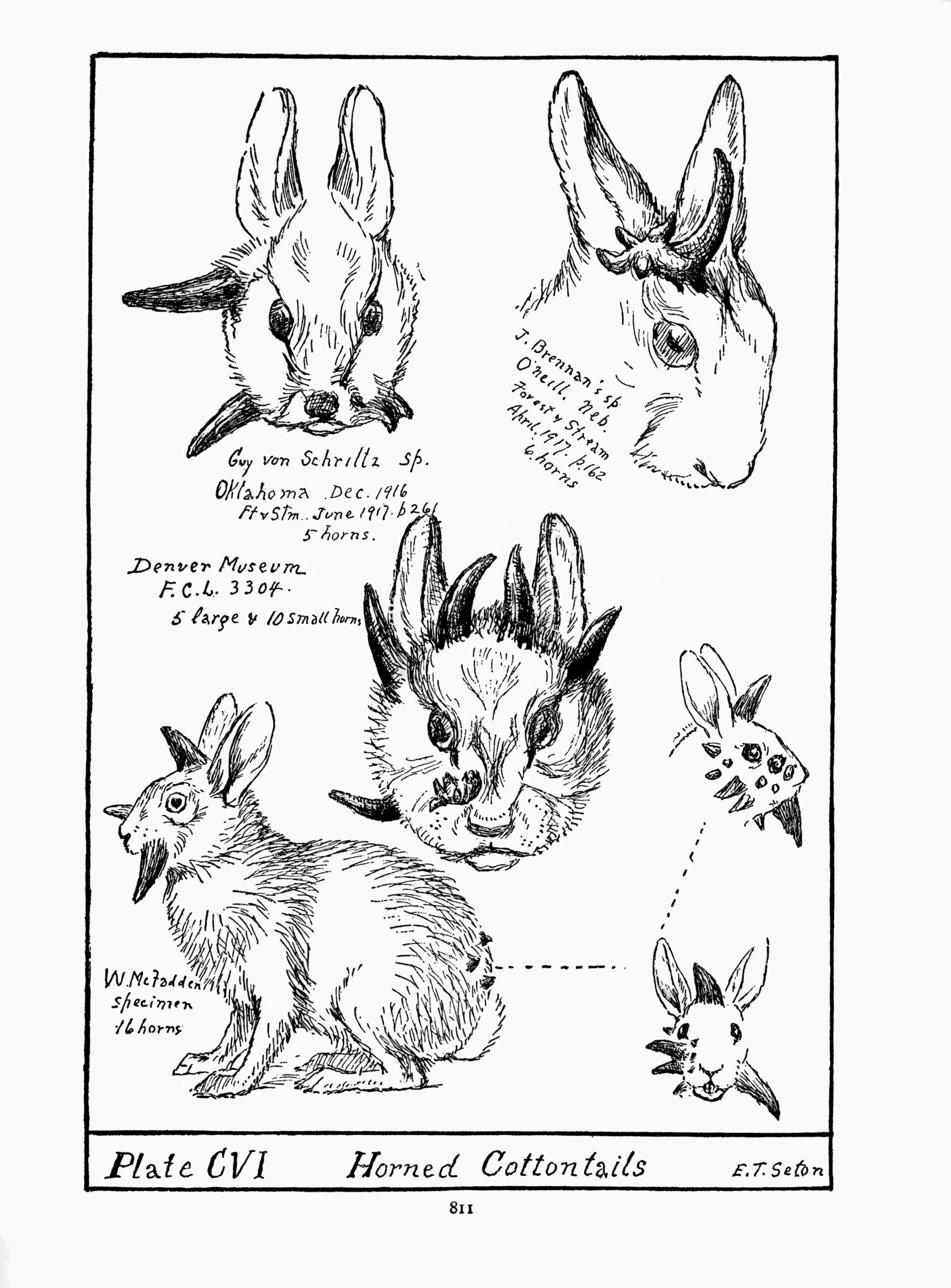 16. Papillomavirus, which causes horns on rabbits and warts on humans, is among the oldest viruses on the planet.

TRUE. The most recent common ancestor of human papillomavirus (HPV) is thought to be around 40 to 50 million years old, which is astounding considering that, as a species, humans haven’t been around longer than about 6 million years. In fact, modern humans probably received some HPV strains from our protohuman ancestors. As the title of one article put it, “Yes, Humans and Neanderthals Had Sex. And They Gave Us an STD.”

17. The HPV vaccine was developed by a renowned research scientist who happens to be the world’s greatest collector of jackalope postcards.

FALSE. The vaccine owes its existence to horned rabbits. Virologist Richard E. Shope’s research on “warty rabbits” during the 1930s advanced medical science by providing the first mammalian model of a virus-induced cancer. The work that followed, carried out by researchers including Nobel laureates Peyton Rous and Harald zur Hausen, eventually led to development of the remarkably safe and effective HPV vaccine. Incidentally, Utahn Sean O’Brien is the world’s greatest collector of jackalope postcards: his collection consists of 276 distinct cards.

18. Most HPV-caused cancers are preventable.

19. Most adolescents in the United States are up to date with their HPV vaccination.

TRUE. But just barely. The Centers for Disease Control and Prevention data for 2020 indicate that just over half of U.S. adolescents are up to date with HPV vaccination (58.6 percent), leaving millions of young women and men vulnerable to cancers that are largely preventable.

20. On the Trail of the Jackalope has been nominated for the Pulitzer Prize in general nonfiction.

FALSE: However, the locals at my neighborhood pub, Great Basin Brewery in Reno, Nevada, have nominated it for the prestigious “Yellowest Book Ever” Award. I think it has a damned good shot. 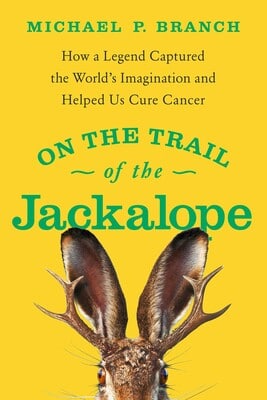 You can read more about jackalopes in On the Trail of the Jackalope: How a Legend Captured the World’s Imagination and Helped Us Cure Cancer, published by Pegasus Books on March 1, 2022.