THE FUNDAMENTAL STRUGGLE with water has never really abated since it first began on the shores of the Persian Gulf. The multiple transitions, from nomadism to sedentism, from hunting and foraging to domesticated agriculture, from small rural communities to a productive, specialized, urbanized society, were severe disruptions. But while individuals would have lived through them as gradual, incremental transformations, over the course of Homo sapiens’ existence, they amounted to shocking events. From the moment Homo sapiens, late in its history, decided to stay in one place, surrounded by a changing environment, it began to wrestle with water, an agent capable of destruction and life-giving gifts.

The reason the early story of water and society matters is that it has left deep cultural traces guiding and inspiring human adaptation ever since. For example, given the experience of early Chinese communities, it is not surprising that water myths are abundant in that culture, and have captured the role of the water landscape in Chinese identity. One Chinese myth tells of how the world formed from the body of a giant, whose blood and veins turned into water and rivers. In another, the Jade Emperor, Lord of Heaven, entrusted four great dragons to bring rain to the people. Their names were Long, Yellow, Pearl, and Black. After they disobeyed him, he entrapped them in mountains, so the dragons turned themselves into rivers, becoming the Yangtze, Yellow, Pearl, and Amur Rivers, the great historical sources of water for agriculture. These are the cultural traces of the great East Asian monsoon.

Chinese culture is not alone in recording its relationship with water. Stories from the past reflected the concerns of societies dealing with the overwhelming power of water. For example, floods are exceedingly common as a foundational myth. The Lenape, the original inhabitants of Manhattan, were believed to be descendants of the survivors of a great deluge who had escaped by riding the back of an ancient turtle while following a bird to dry land. The Navajos believed they originated from Insect People, chased away by gods that sent water to cover the land, and who had been guided by a swallow in their escape. Both found in the story of water a powerful source of identity.

When in the sixteenth century Cristóbal de Molina and Sarmiento de Gamboa spoke to those who had survived from Cuzco, they learned of the Unu Pachacuti flood, which covered the land around Quito. Similarly, Maya populations left accounts of a mythical flood that destroyed the race of men and established a new order. In Scandinavia, the Old Norse frost giant Bergelmir was the only one to survive a destructive flood, saving himself and his wife by boat. Even the aboriginal societies of Australia, isolated on the continent for fifty or sixty thousand years, in their ancient songs told of a time when much of the coast was dry land, and of how the waters came to cover it.

It is unlikely that these flood myths all refer to an actual, synchronous memory, for example that of the melting of the Last Glacial Maximum. But such a wide canon of evocative water-related stories is an indication of just how traumatic those adjustments must have been for early societies.

The stories from Mesopotamia, in particular, speak to the oldest memories of humanity’s relationship to water. In a famous tablet from Nineveh, a schematic river, the Euphrates, flows through the center of a map, and through Babylon. Below the city, the river ends in marshes, a canal, and, finally, the sea. One image, a few etched marks on unfired clay, captures the significant elements for early societies: the river and the water landscape as whole systems with the life of an organized people.

What propelled the Mesopotamian records like this one to unprecedented modern fame was one tablet in particular. It told an episode of an Akkadian epic in which its protagonist, Gilgamesh, had set out to find the patriarch Utnapishtim, “the faraway.” When he found him, Utnapishtim told Gilgamesh of how he had saved himself from a destructive flood by building a vessel, of how he had received a divine mandate to save animals, of the endless floating, of a dove sent out to seek land, of landing, finally, on the mountain in Urartu. It was Noah’s story from the Old Testament.

When Assyriologist George Smith broke the news of this discovery in 1872, it hit the public like a thunderbolt. Here was what seemed to the Victorians as independent confirmation of the biblical story, from about a thousand years before the writing of the Old Testament. The great flood, the deluge, the story of the destabilizing havoc that an immense amount of water supposedly wreaked on a prehistorical society. For forty days and forty nights, an implausibly old Noah, his family, and seven pairs of each animal on the planet floated in the ark, as God let water out from “the springs of the deep and the flood gates of the heavens.” The Akkadian story of Utnapishtim and the flood mesmerized the world. Newspapers went straight for the sensational. In a moment of lyrical abandon, the Daily Telegraph and the New York Times both ran this line: “History was jealous of Romance until last week; but then suddenly she gave to the world, by the marvelous skill of a scholar in the British Museum, a fragmentary story far more wonderful and entertaining than any work of fiction.”

That societies produced these composite allegories of the relationship between the powerful and unbridled force of the environment and human society supports one basic conclusion: the story of the struggle with water is the root of organized society, and it started when people stopped and noticed that the water around them moved.

This is an excerpt from Water: A Biography, courtesy of Pantheon Books,
published September 14, 2021. 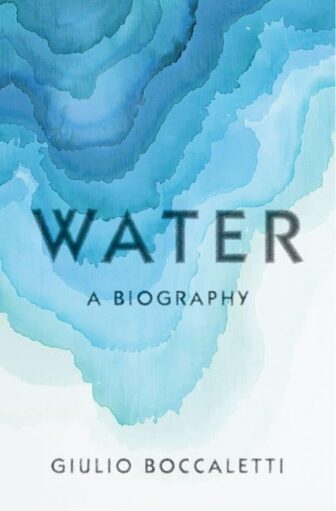 Giulio Boccaletti is a globally recognized expert on natural resource security and environmental sustainability. He is an honorary research associate at the Smith School of Enterprise and the Environment, University of Oxford. Trained as a physicist and climate scientist, he holds a doctorate from Princeton University, where he was a NASA Earth Systems Science Fellow. He has been a research scientist at MIT and was a partner at McKinsey & Company, where he was one of the leaders of its Sustainability and Resource Productivity Practice, and the chief strategy officer and global ambassador for water at The Nature Conservancy, one of the world’s largest environmental organizations. Boccaletti frequently writes on environmental issues for the news media, including Project Syndicate and The Guardian, and is an expert contributor to the World Economic Forum. His work on water has been featured in the PBS documentary series H2O: The Molecule That Made Us. He lives in London.