IN THE VILLAGE OF WAYNE in southcentral Maine, there is a potter named Molly. She has steady hands and a voice that warbles. Her home is on a narrow piece of land between lakes, and there she quarries a ton of blue-black wet clay from the backyard once every ten years. Molly draws life up from the ground, from the calls of the loons and from the community of people to which she belongs. Transmutes it into something new. When she speaks about the things she cares about, you can hear her voice trill like a stream running over stones.

It isn’t known whether Molly bought her property and found the clay and became a potter as a result, or whether she was already a potter and fell in love with the property for its clay deposit. Knowing that chronology doesn’t matter so much; another sequence of events, on a much grander scale, tells the real story of her work.

By car, Wayne is a few hours south of Mount Katahdin, the northern head of the Appalachian Mountains that spill down the eastern corridor of the continent to the Gulf of Mexico. Though still tall, the range used to strike at the horizon even more fiercely, with summits as high as the present-day Himalayas. Hungry waters and winds tempered the peaks over millennia so the hills just roll around Wayne now, though on clear days, far off in the distance you can see the white-streaked crests that are the descendants of the old Appalachians.

In an age long before Molly’s ancestors were born—about thirty-five thousand years ago—a glacier called the Laurentide Ice Sheet swelled over the continent. Earth’s falling temperatures confined water into its solid state. The glacier plowed through topsoil and entombed boulders in its belly, clawing the ground as it expanded. It rose a mile, maybe two in some spots, over Maine. The weight so heavy it pushed the earth below it downward.

About 21,000 years ago the Laurentide began to thaw, and for thousands more years it slowly exposed a depressed landscape, marked all over by deep gouges, strewn with the sediments, organic matter, and boulders that the melting beast surrendered. What the Laurentide left behind was a bowl of sunken earth, and into the bowl poured another great force, the rising Atlantic.

So there was a period between the glacial age of the Laurentide and the present day, when the land was neither covered in solid ice nor entirely unburdened. Being underwater, the region of Maine where Molly now lives was a seafloor, a depository of salt, sand, and aquatic organic matters. All of which contributed to the clay formations now found throughout the region (and throughout the continent).

Though the glacier had temporarily molded a basin for the ocean, the planet is supple so eventually most of Maine rebounded and the water was forced to flow away to lower places. At that time, land and water followed a law by which lakes and rivers filled the deepest of the leftover cavities, while the rest of the region was left to dry out. Now defined were the real impacts of the glacier. Rivers of meltwater that formed during the thawing of the glacier ran from their source toward the ocean. These rivers often dumped deposits of blended silt, sediment, mineral, and organic matter across the region. Because of these culminating events, today, when a backhoe plunges fifteen feet behind Molly’s house, it unearths a shiny blue-black material perfect for shaping pottery. 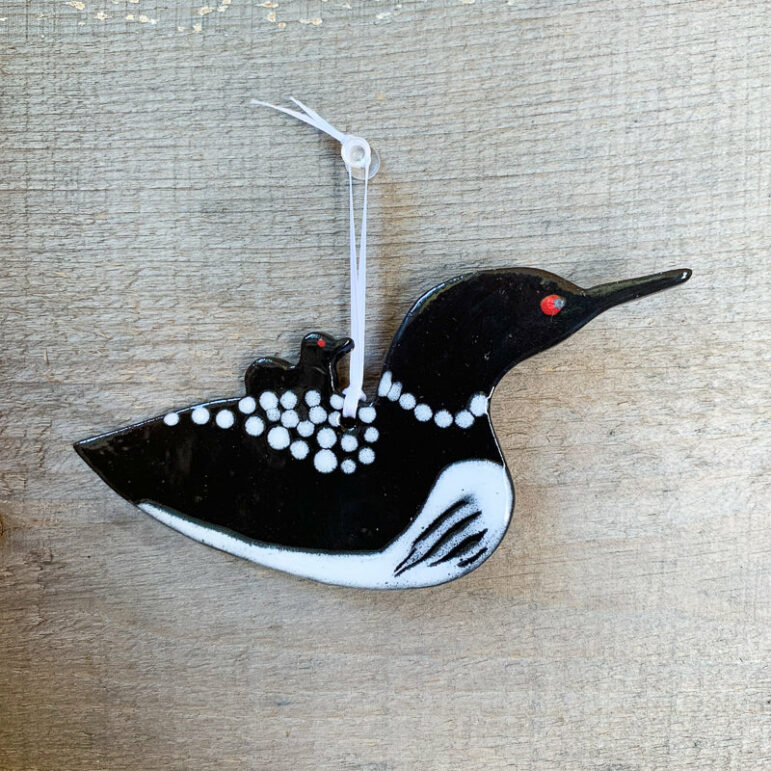 A loon and chick ornament crafted by Molly

The clay is what Molly needs. With a utilitarianism common in Maine, she likes to make things that are practical: mugs, plates, and pie dishes. Compost buckets to return apple stems, eggshells, and potato peels to the earth. Still, even with the usefulness of her products, there’s an undeniable natural aesthetic that ripples out from the finished pieces, one that echoes her love of aquatic ecosystems. With practiced strokes, she paints loons in watery blues on earthy cream backgrounds. Each winter she produces new ornaments for her customers to give as gifts, a different type with every year. Herons, chickadees, cardinals, owls, blue jays, and hummingbirds. Black bears with their cubs, antlered moose, and jumping trout. And of course, Maine’s iconic loons.

The loons’ haunting calls sift through water lilies and the mist of summer dawns, occupying space in the human imagination, even as disruption, pollution, and invasive plants threaten their survival. Wayward fishing tackle, lead sinkers, and jigs contaminate their watery homes, become poison when a bird mistakes them for the gravel they must swallow to grind food in their gizzards. Scientists report lead ingestion as the primary cause of death for adult loons in Maine.

When a loon is poisoned by lead, it is slowly erased. First it becomes unable to fly, then it loses its swimming prowess, suffering from tremors; unable to hunt, mate, or care for its young, it eventually succumbs. One more loon call slips from the water; their call echoes no more. 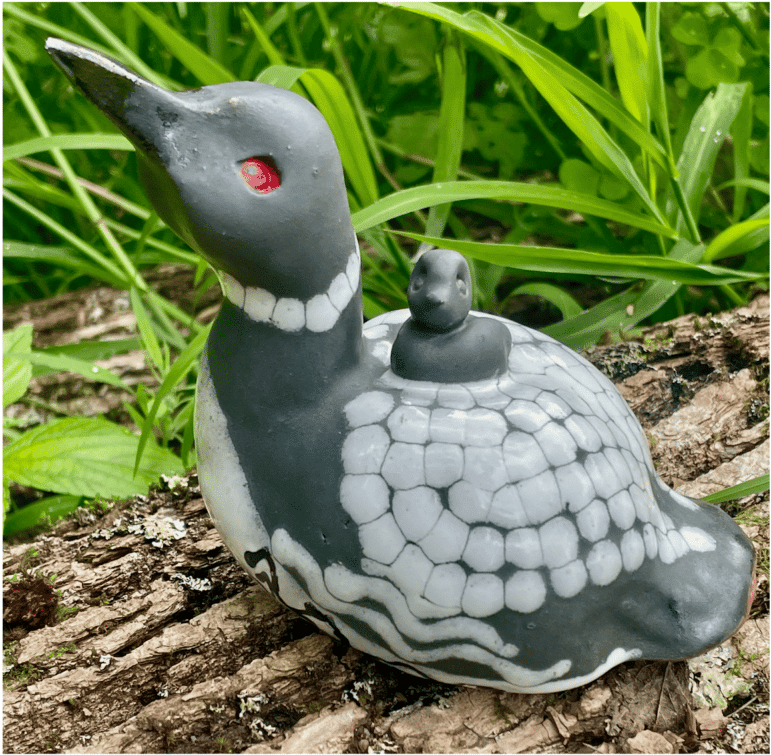 A Loon whistle crafted by Molly

BUT WHILE SOME DIE, others live. New chicks will hatch, will swim in these lakes. It is this dual sadness and hope that propels Molly’s life and work.

FOR HER, THE ENVIRONMENTAL BECOMES THE personal becomes the creative becomes the social as all her efforts intertwine. When she paints loons on her pottery, she uses lead-free products and makes her own materials instead of buying from big craft supply companies. The glaze has to fit the clay, she explains. It took her hundreds of tests and a few years to perfect a recipe that shrinks at the same rate as the clay, forming a tight bond that will endure. Molly loves the land and the formations it holds, the lakes that fill holes the glacier left and birds that call from their waters. Her esteem for the natural world helps shape the pottery she makes. And the pottery helps map the daily patterns of lives in Wayne, where it is ubiquitous in people’s homes.

As long as Molly isn’t at a local meeting to advocate for wildlife habitat, discuss water quality concerns, or advise town committees on development plans, an open flag flies from the Wayne Village Pottery sign at the foot of her driveway. Through these environmental threats and changes, Molly returns to her pottery wheel with intent. She knows any small interruption in the spinning will warp the shape she is creating from the backyard clay orbiting around the center of the wheel. Perhaps she imagines her work in her mind’s eye, waiting for the clay to realize her plan. Maybe she relies on a natural law born of geological and hydrological forces. In the back room of her studio, warmth spills from a central wood stove as loons call to each other from neighboring lakes. A murky glow fills the room. Filtered through pine branches, it slides through the windowpanes, softened by clay dust in the air.

Learn more about Maine’s loons and habitat protection efforts from:

Emily Perkins Harrison grew up in Wayne, Maine, and spent many of her childhood days exploring nature. She attended Dalhousie University in Halifax, Nova Scotia, graduating with a degree in Spanish, then spent years traveling across the country and to Costa Rica and the Dominican Republic before taking up farming in South Carolina. Emily could often be found gardening, writing, painting, drawing, and photographing the world around her. She enjoyed participating in writing workshops, including a recent Orion course with Hannah Dela Cruz Abrams. Hannah says, “Emily’s gentle voice entered our conversations with a rare and limpid wisdom that stays with you. On the page, she could span epochs and melt glaciers in a single, sublime line.” This essay was what she was working on in class.