This is an excerpt from Regenesis by George Monbiot.

While I was researching this chapter, the doorbell rang. Deliveries are usually an annoying distraction. But when I saw what the man was holding, I bounced down the stairs and flung open the door. I took receipt of a large cardboard box that contained a possible future. I asked my youngest daughter to open it, as it mostly belonged to her.

I’m sure she would have preferred a mobile phone. The contents were not the most thrilling present for a nine-year-old. There were five bags. Four of them contained flour, the fifth, rice. But when I showed her the remarkable photograph that accompanied them, and explained what it meant, she contracted a little of my excitement.

The photo was printed on a long thin strip of paper, folded in three. It opened to reveal two plants side by side, dug from the soil with their roots intact, shot against a black background. Both were members of the grass family. I recognized the one on the left. It was a modern, short-stemmed variety of wheat. The pale roots formed a thin goatee, a little longer than the plant was tall.

The grass on the right was a species I hadn’t seen before. It was taller and bushier than the wheat. Its seedheads were long and thin. But the most interesting feature lay below ground: a ginger beard of roots that ZZ Top would have worn with pride, woolly and matted, blotting out the background and twisting down to the bottom of the third fold. Using the wheat for scale, I reckoned it must have been over three meters long.

This was a specimen of intermediate wheatgrass.¹ The name is slightly misleading, as it has no close relationship to wheat. It’s a wild plant, but the specimen in the photo had passed through several generations of selective breeding by a nonprofit group called the Land Institute, which had sent me the box from its base in Salina, Kansas. Because intermediate wheatgrass is unlikely to lodge in the mind, the institute had given the plant a new name: Kernza. Four of the five bags contained flour made from its seeds.

There’s nothing inherently amazing about flour made from grass seeds. After all, most of the grains we eat come from this family: wheat, rice, corn, oats, sorghum, millet, rye, and barley are all grass. Several businesses have brought new (or old) grass seeds onto the market, such as the heritage wheats that John Letts and others have revived, or spelt and einkorn. But what enthuses me about this flour is that it comes from a grass that differs fundamentally from all those mentioned in this paragraph. While those crops are annuals, which means that they must be replanted every year, Kernza is a perennial. It persists over several years, averting the need to clear and sow the ground for every harvest. Of all the possible agricultural technologies and techniques I’ve explored while researching this book, I find this the most exciting.

Large areas dominated by annual plants are rare in nature. They tend to colonize ground in the wake of catastrophe: a fire, a flood, a landslide, or a volcanic eruption that exposes bare rock or soil. They survive, in these circumstances, only until perennial plants return and start to mend the broken land, whereupon they are usually overwhelmed.

But it’s not hard to see why our ancestors selected them. Plants that colonize bare ground have evolved to grow fast and invest much of their energy in seeds, rather than in deep roots or dense foliage, so that they can spread as far as possible before the new land closes up. Their seeds tend to be large and to germinate freely.

The problem is that in cultivating annuals, we must keep the land in the catastrophic state they prefer. Every year, we must clear the soil of competing plants, puncture or turn it, and plaster it with the nutrients required to raise a crop from seed to maturity in a few months. However sensitively it is conducted, annual grain production relies on sustaining an ecological disaster for its success. But if instead we grew perennial grain crops, we would not depend on smashing living systems apart to produce our food.

The problem is that in cultivating annuals, we must keep the land in the catastrophic state they prefer.

For the past forty years, the Land Institute has been scouring the world for perennial species that could replace the annuals we grow. With other research groups, it has assessed thousands, looking for particular features: high yield, synchronous development (so all the grain can be harvested at the same time), seed retention (which means that the grain stays on the plant until it’s harvested)2, and ease of growing and reaping (especially by small farmers).

Once they’ve found likely species, the researchers start selective breeding to raise their yields and improve their food and farming qualities. At first, they simply selected, crossed, and multiplied the individual plants with the highest yields. Now they use new technologies3 to speed up the process. Breeding of the kind that once took centuries can be compressed into a couple of decades.

Sometimes a promising plant goes nowhere. Sometimes an unpromising plant takes off. For example, the Land Institute gave scarcely a thought to a perennial sunflower called Silphium, because in the wild it produces only fifteen or twenty seeds on every flowerhead. But by casually selecting the plants that had a few more seeds than average, within eight years its researchers found themselves harvesting heads with 150 seeds.

Though Kernza—intermediate wheatgrass—is still being developed, it’s one of the first crops that the Institute has tentatively brought to market. So far, the plants have been bred to carry as many seeds as wheat does, but each one is only a quarter of the weight. The breeders hope to match wheat yields within thirty years.

Because the land remains covered for years at a time, bound by their massive roots and showered with their abundant litter, perennial grains like Kernza are likely to reduce erosion and raise the amount of carbon in the soil. One estimate suggests that, if the switch were made worldwide, agricultural soils would regain between a quarter and two-thirds of the carbon they’ve lost since they were first plowed. Ecosystems dominated by perennials, such as forests and natural grasslands, support richer and more abundant soil life than fields growing annual crops.

As their long roots draw nutrients from deep in the ground, perennial crops become their own green manures, their own herbal leys. So the land need not be taken out of production. The longer the plants stay in the ground, the stronger their relationships with bacteria that fix nitrogen, and microbes and fungi that seek out other nutrients. This means that they should, in principle, need less fertilizer. One estimate suggests that perennial systems hold five times as much of the water that falls on the ground as annual crops do.

When farmers switch from annuals to perennials, weeds are likely to be a major problem during the first couple of years, as the land can’t be plowed, and general herbicides would kill the crop. But once a perennial crop is established, its shade and litter tend to stifle weeds. Experiments with perennial energy crops suggest that no further weed control is needed. Kernza, according to some of the farmers who have experimented with it, is “highly weed-suppressive.” Given that it forms great fibrous clumps covering the soil surface, it’s not hard to see why.

Because weeding is likely to be needed only at the beginning, it might make economic sense for farmers to do it mechanically: hoeing or mowing between the rows with machinery (or, on very small farms, with hand tools) or, when the technology becomes widely available, briefly hiring a robot. The less the soil is disturbed, the fewer opportunities weeds have to take root: all else being equal, they should be easier to control in a perennial system. Of course, these deep-rooted perennials could themselves become weeds, invading other fields or persisting when farmers want to change the crop. This is one of many issues that needs to be investigated, for every new perennial plant that’s bred.

Some papers argue that plant diseases could become a bigger problem in perennial grain farming, as they might proliferate from one year to another, others that they could become a smaller problem, as stronger relationships with soil bacteria allow plants to ramp up their immune responses4. Encouragingly, the wild plants from which Kernza and other grain crops are being bred seem highly resistant to the viruses that attack annual crops.

The deep roots and tough structures of perennial plants are likely to make them better adapted to climate chaos. The perennial sunflowers I mentioned have sailed through two severe droughts, one of which entirely destroyed the annual sunflowers grown alongside them. Farmers can greatly reduce their costs: once these crops are established, they should require little in the way of fertilizer, less irrigation, perhaps no pesticides, and less use of machinery. Because the poorest farmers have generally been pushed into the poorest lands, these crops, which tend to be less demanding than annual plants, could suit them better. 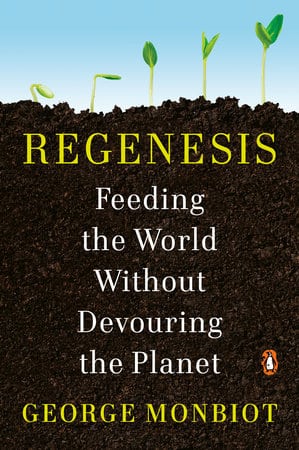 1 Thinopyrum intermedium
2 The desirable trait is known as shatter resistance
3 Such as gene sequencing, genomic prediction, and marker-assisted selection
4 The process known as Induced Systemic Resistance