THE SUMMER MY DAUGHTER WAS BORN, a crush of human displacement came to the Western Hemisphere. Civil wars that had been cascading across northern Africa and the Mid­dle East for several years suddenly boiled over, and refugees began flooding northward—first to Turkey, then into Greece, Italy, Hungary, and into the heart of Europe.

On social media, this spectacle of human trauma became interwoven with posts of my expectant pregnancy, forming a sort of family album both monstrous and radiant. Beneath each post of some murky sonogram or swollen belly awaited images that grew less tolerable as weeks went on, as my heartburn and aching legs intensified in the final trimester. These were images of young and old pressed against chain link fences, children on the shoulders of young women, and men whose faces were sunken with despair and fatigue, of inflatable rafts buckling with the weight of migrants cross­ing the Aegean.

A few weeks before my daughter was born, I awoke in the middle of the night, grabbed a paper and pen, and scrawled a message:

These are times when the riptide of humanity can overwhelm even the strongest swimmer. I hope by now you are parallel to the land, the waves pushing you gently back to shore.

These words, distilled by an anxiety deep in my subconscious, seemed to have been crafted as unconsciously as my daughter’s tiny body itself.

One month after her birth, the images of the refugee crisis were eclipsed by one that, decades from now, will surely encapsulate this moment of human sorrow, that of a drowned toddler face down on a beach. There is not a single parent who has looked at that photo and not felt the gut-hollowing sensation of witnessing their own child’s death.

For many of us, what is so disturbing about the times in which we find ourselves is this sense that, rather than being some spasm of ethnic conflict, the geopolitical shock that began with the Arab Spring is but a leading edge of a longer shadow that will cast over our children’s lives.

More humans are now displaced than in any time in human history, driven from their home­lands by conflicts precipitated by a changing climate. The germ seed of civil war and genocide is drought, famine, flood, and fire. The embers that became the Arab Spring were lit by the match of climate change; after all, drought had precipitated the spiraling food prices in Tunisia, the same year Tarek el-Tayeb Mohamed Bouaziz lit himself on fire, touching off revolts across northern Africa.

For Americans, the specter of migrants fleeing poverty and war abroad advanced at a much faster pace than any perceived threat of climate change. That was, until 2017, which brought a succession of climate events that marked a shift from an era when climate change could be seen as some far-off event, to something in present tense, something that had begun to feel deeply personal. There was Hurricane Harvey, closely followed by Irma, Katia, and Maria. Oregon’s Multnomah Falls was on fire. Flames consumed the historic Sperry Chalet at Glacier National Park.

The summer of 2017, I went to a friend’s wedding in the California redwoods, stopping on the way to visit cousins in Sonoma County. It was 107 degrees, and as we sat flattened by heat, joking about a Texan bringing her terrible climate, I thought of how the same characteristics that give wine country its quaintness—the narrow, winding roads, tight valleys, fringing forest—could also bring terrible suffering. Years of drought followed by heavy rains had left standing tinder across the hillsides.

Two months later, the fires came. I watched as my cousin and family friends evacuated, as homes crumbled to ash, as the steel skeletons of buildings melted. Heartsick, I wrote my daughter a second postcard—a memory of the hills of wine country. It was an act of mourning, but also one of tribute to a place of great meaning to me. Its writing gave me solace, because it allowed me to give words to what I felt: the warmth of memory, the fear of a future out of our grasp, the deep love for my child and the billions who will live in a world I do not recognize.

I wanted others to feel that solace, to give name to grief, to send a dispatch to future generations to let them know that we saw what was happening, and that though we may have felt powerless to fight against this riptide of fate, we held them close in our hearts as we were dragged out to sea.

In that spirit, I joined with my dear friend, Jessica Gath, a performance and visual artist whose work takes many forms, all of which are born on currents of love. We invited other artists—people who process the world through making—to create their own postcards in the face of the naked truths of climate change. We asked them to join us in a written and visual chorus to the young people dearest to us and to everyone on Earth, now and in the future.

You can see what came out here: intimate and urgent messages written for loved ones and for people we will never know. Physical objects that may, themselves, become all that’s left of the world we know today. Wish You Were Here is a collection of postcards from beloved places to the people who will never know them. It is meant to presage the passing of these places, to mourn them, to celebrate them while they remain. What will you miss? Of what will you sing? 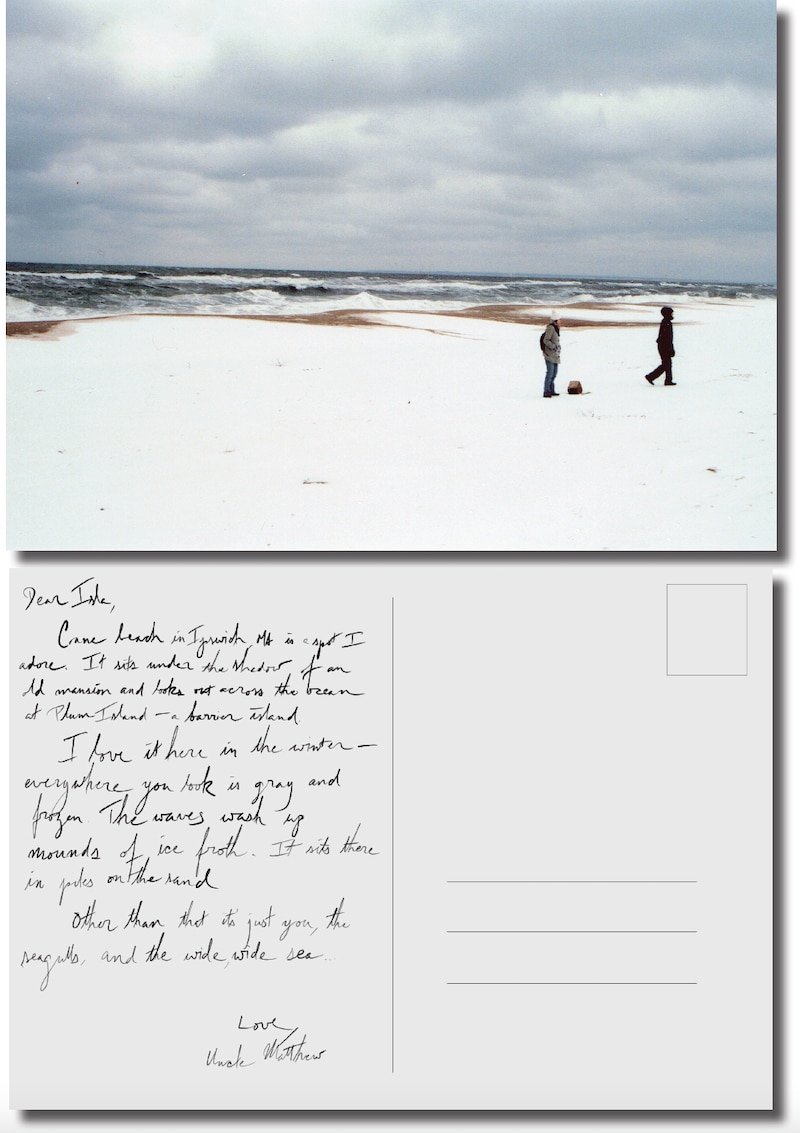 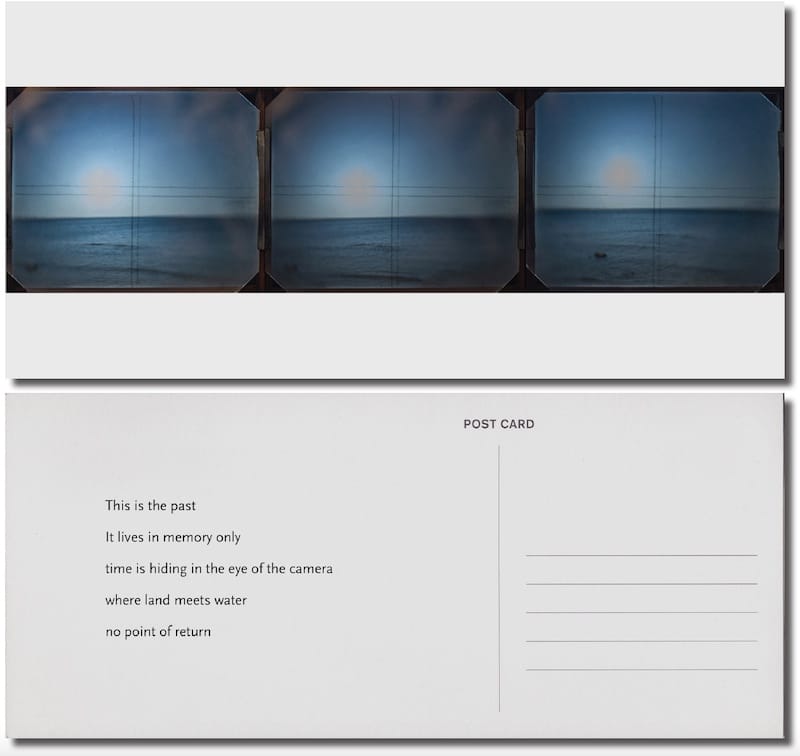 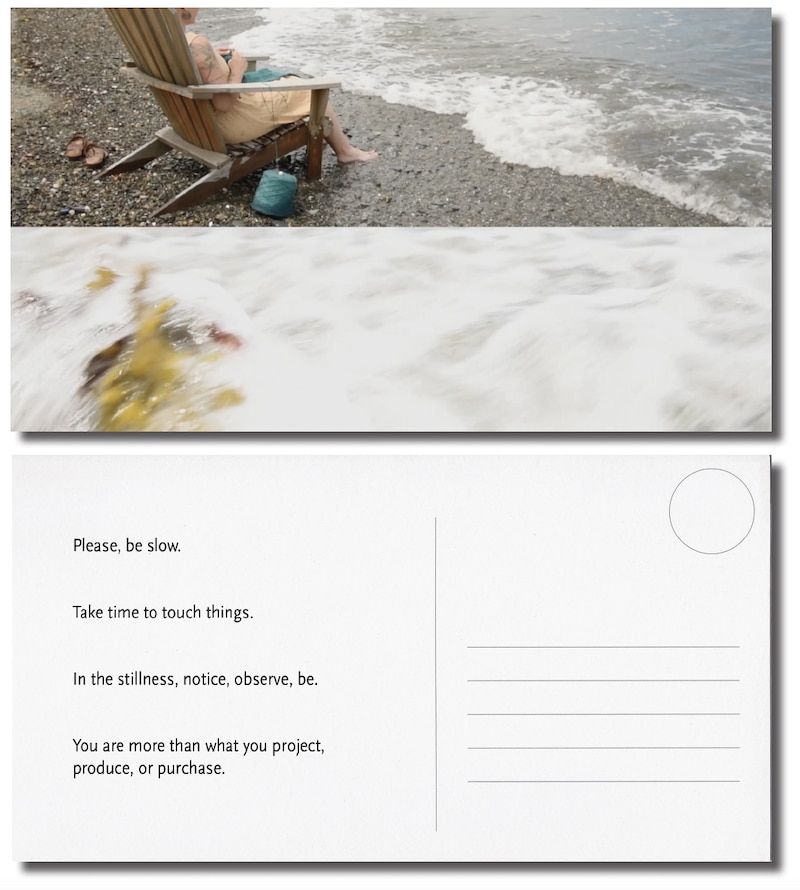 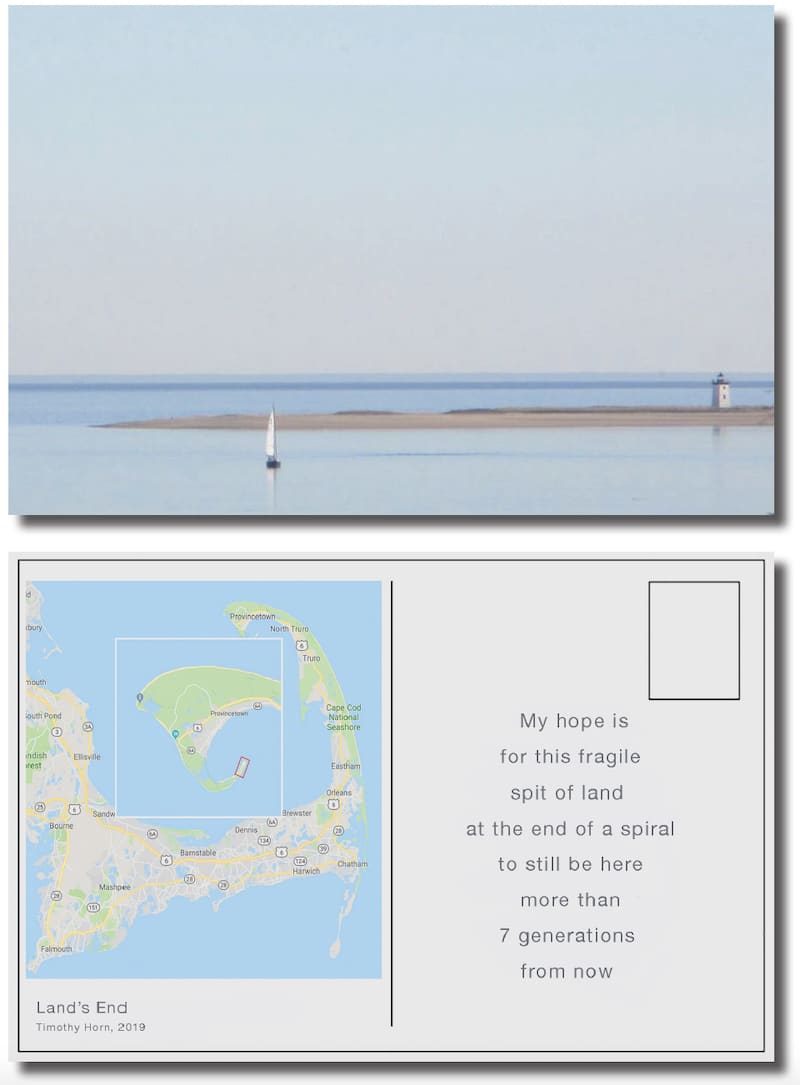 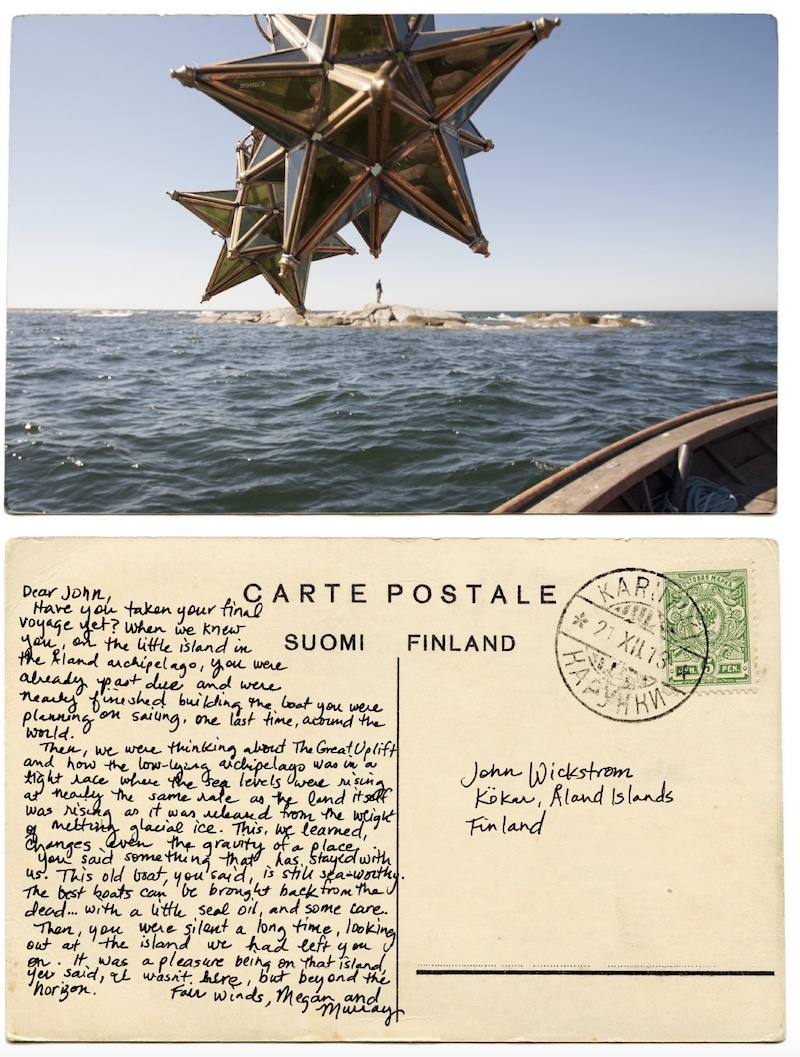 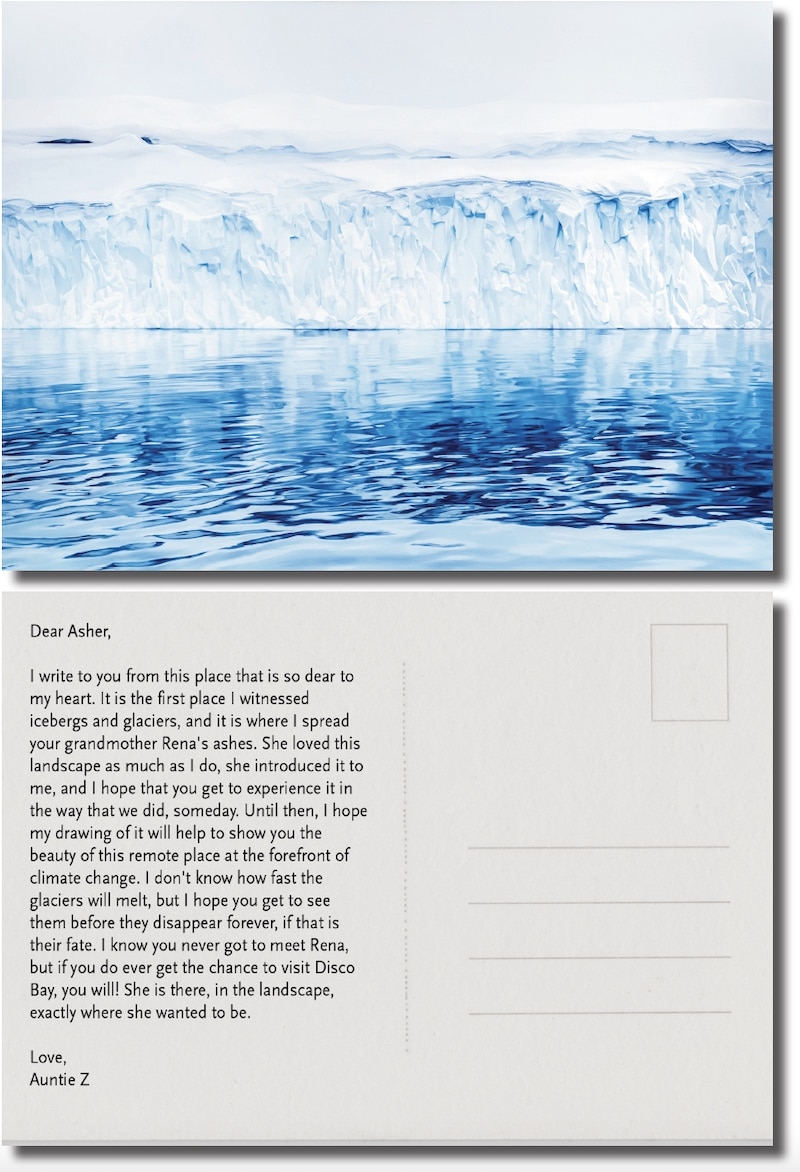 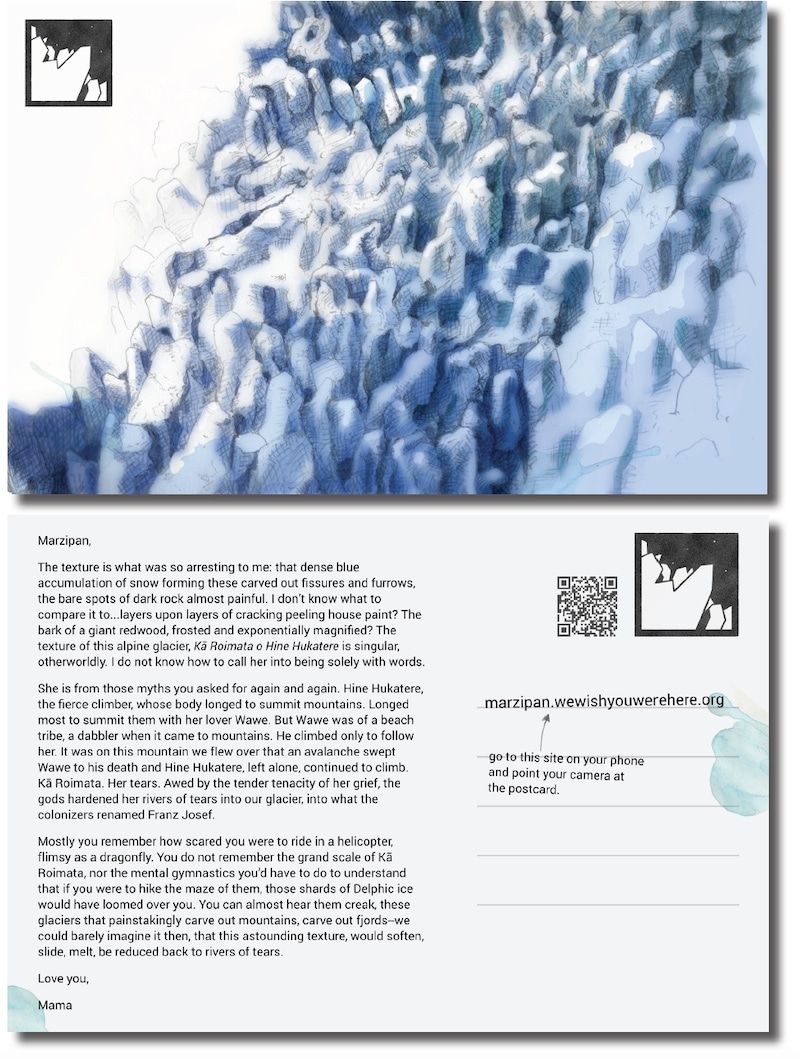 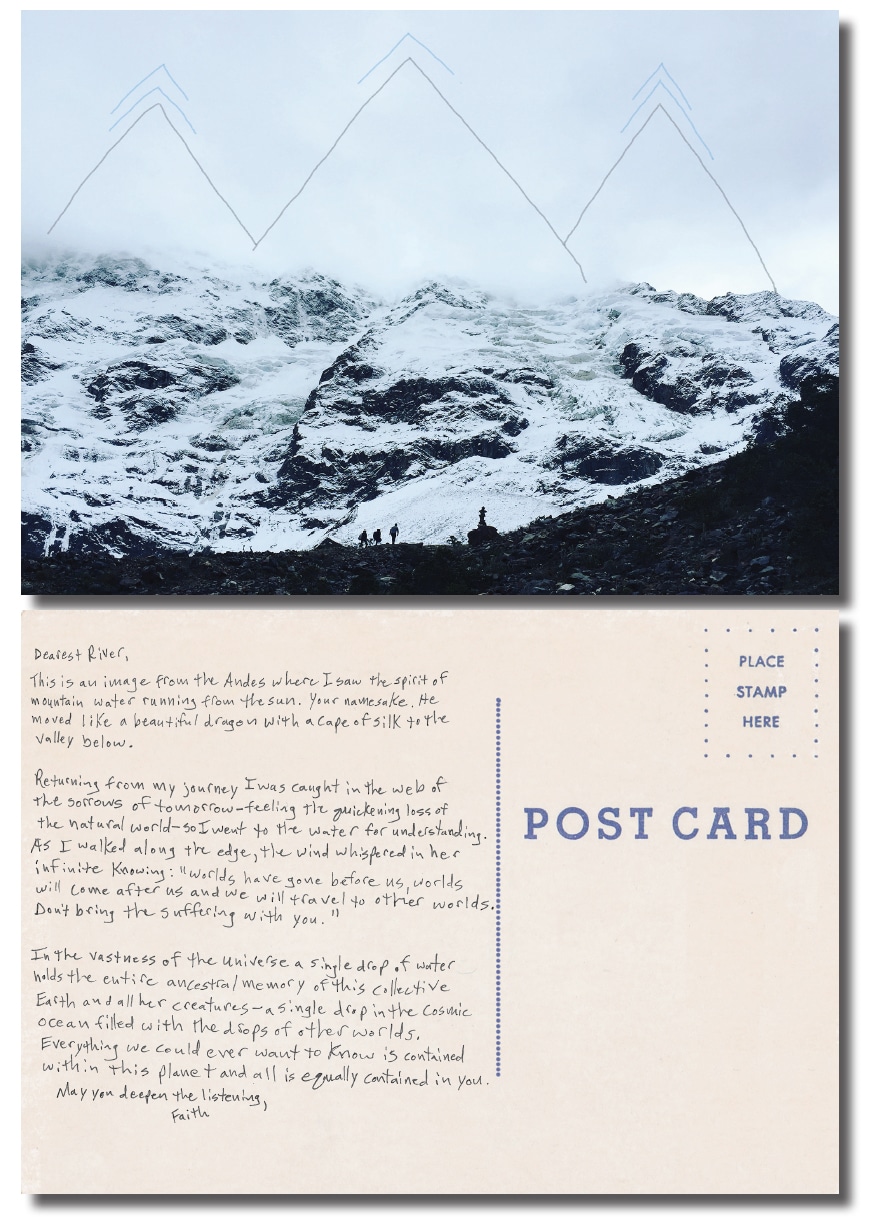 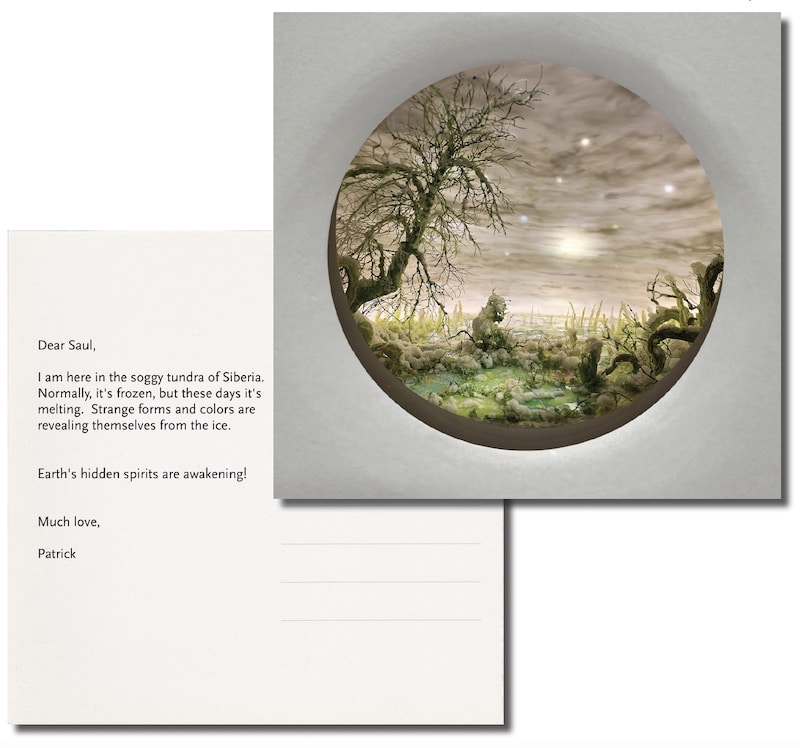 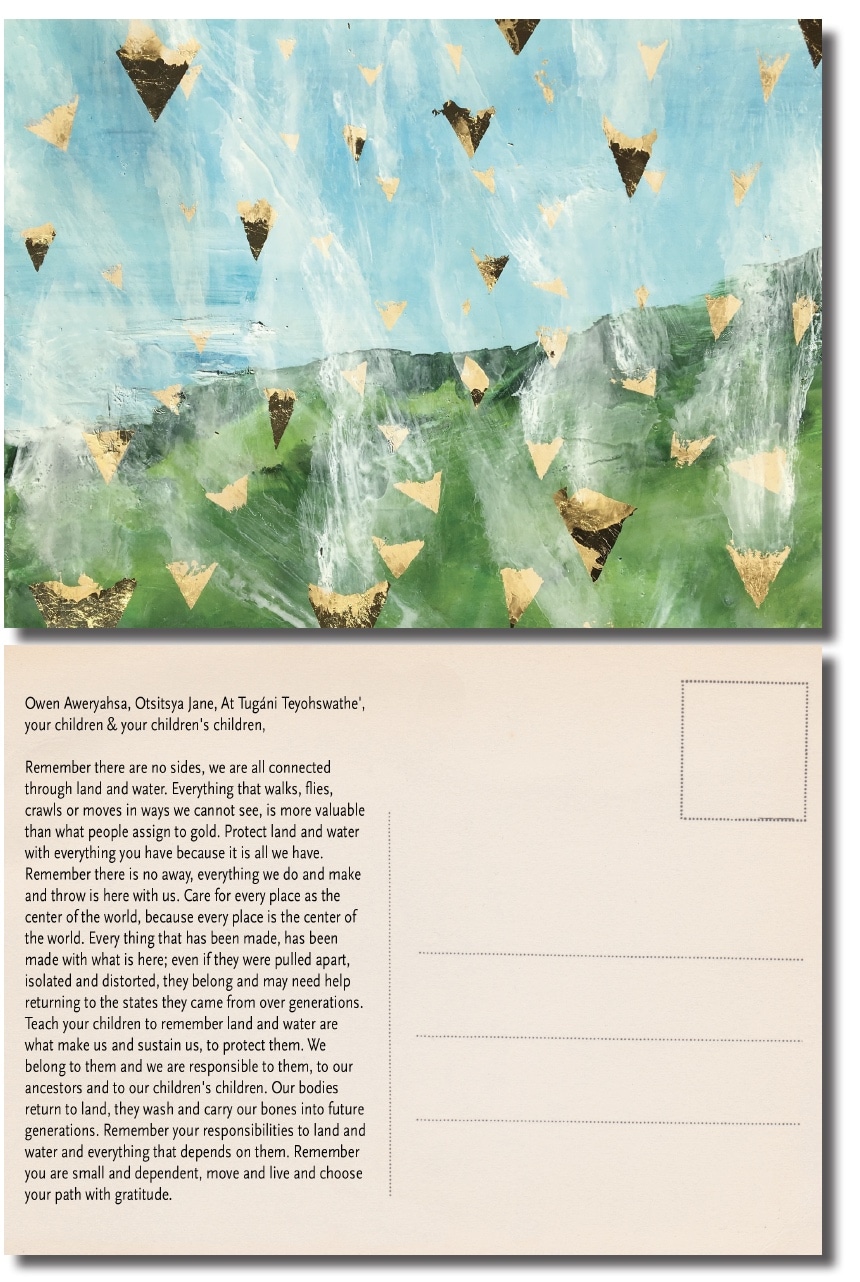 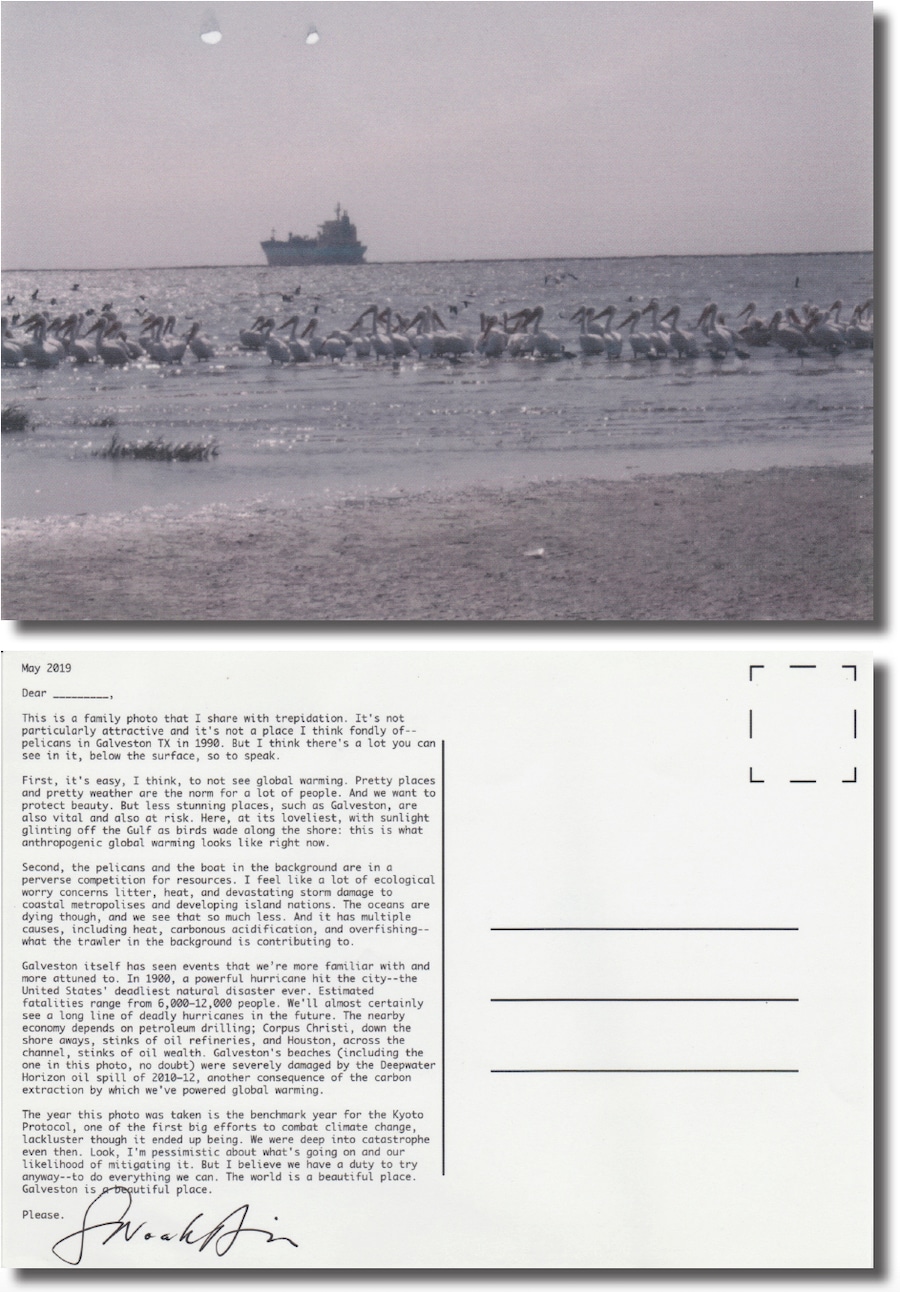 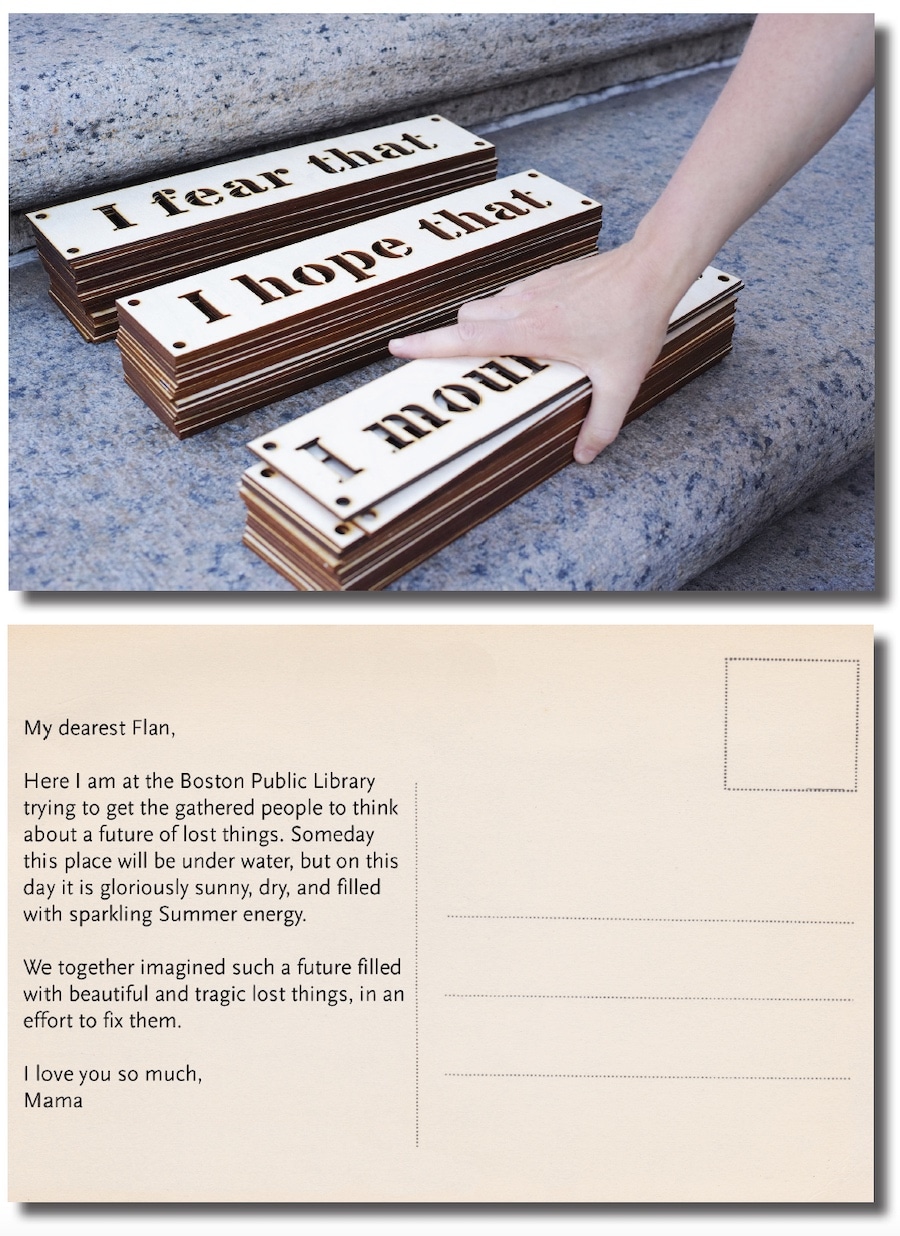 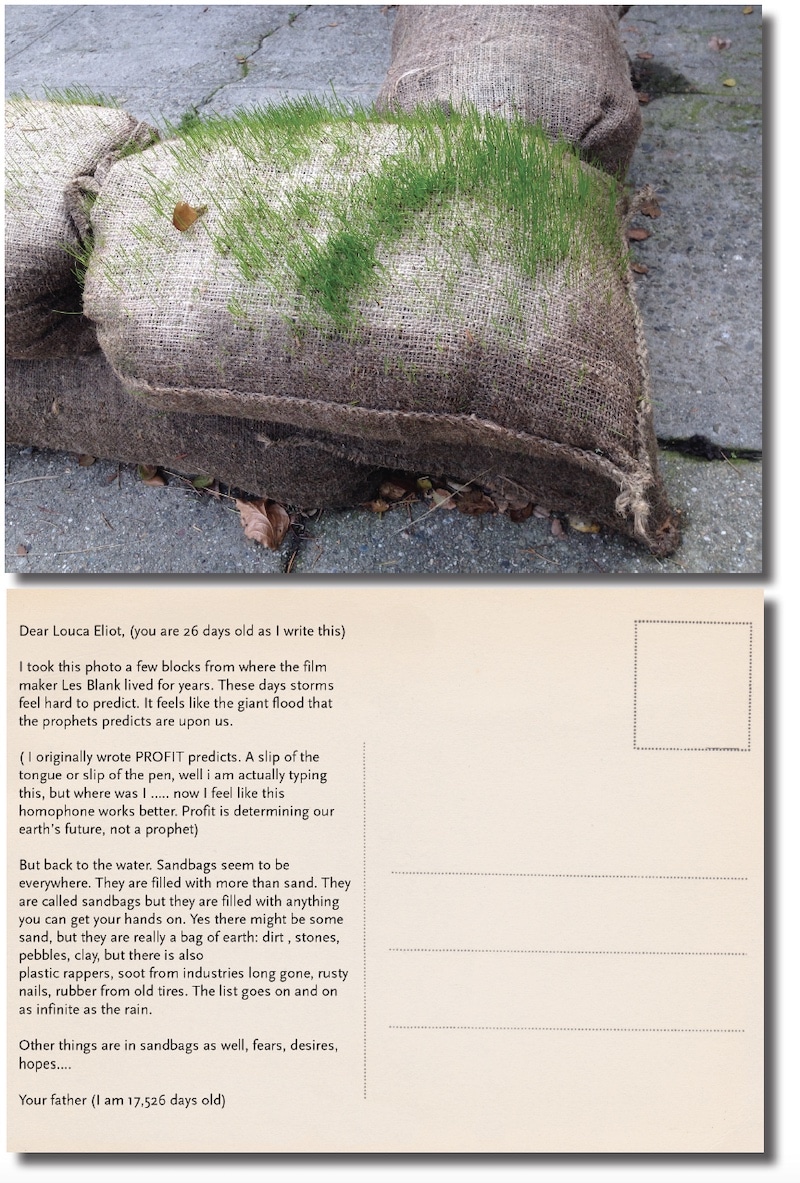 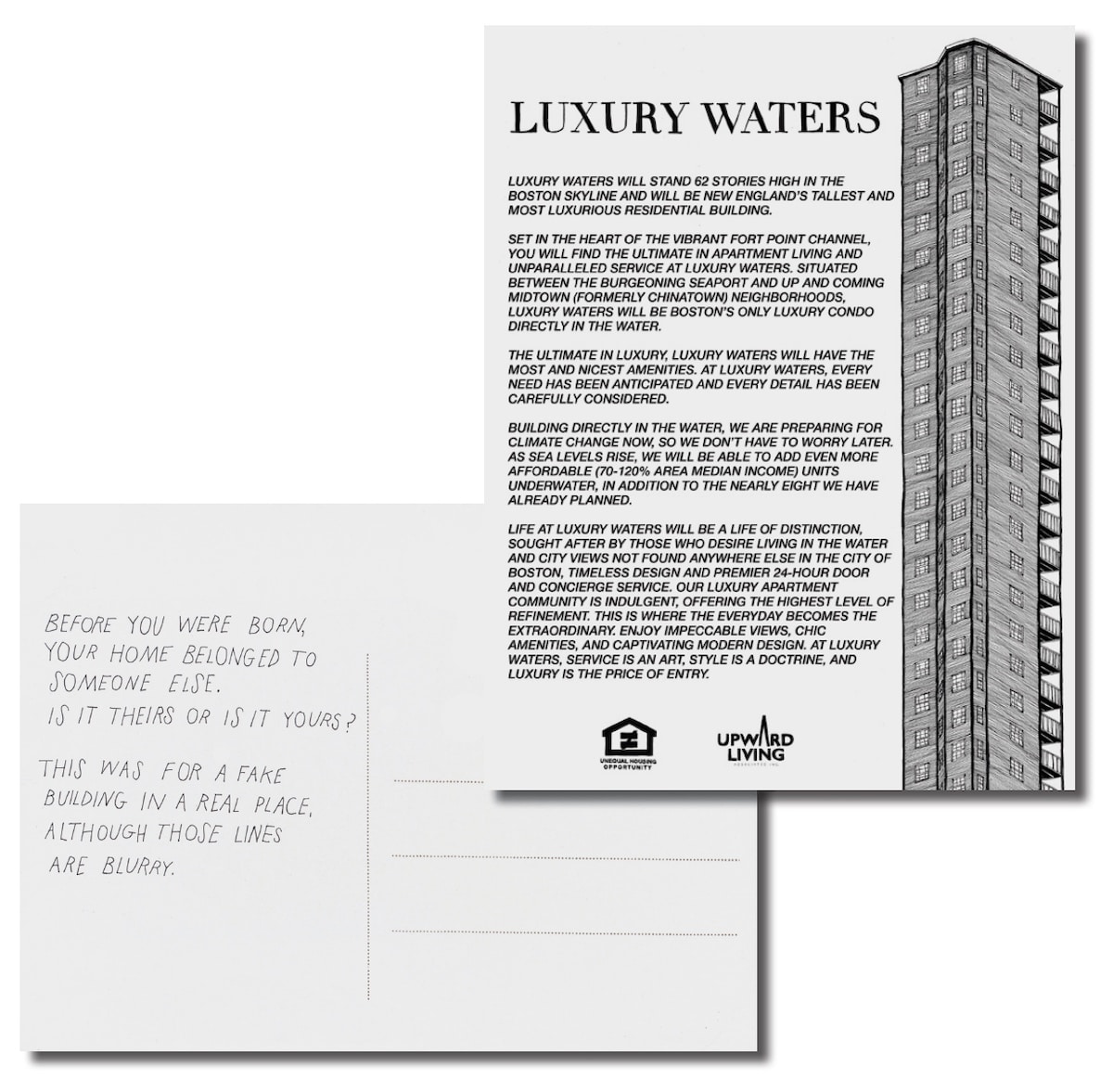 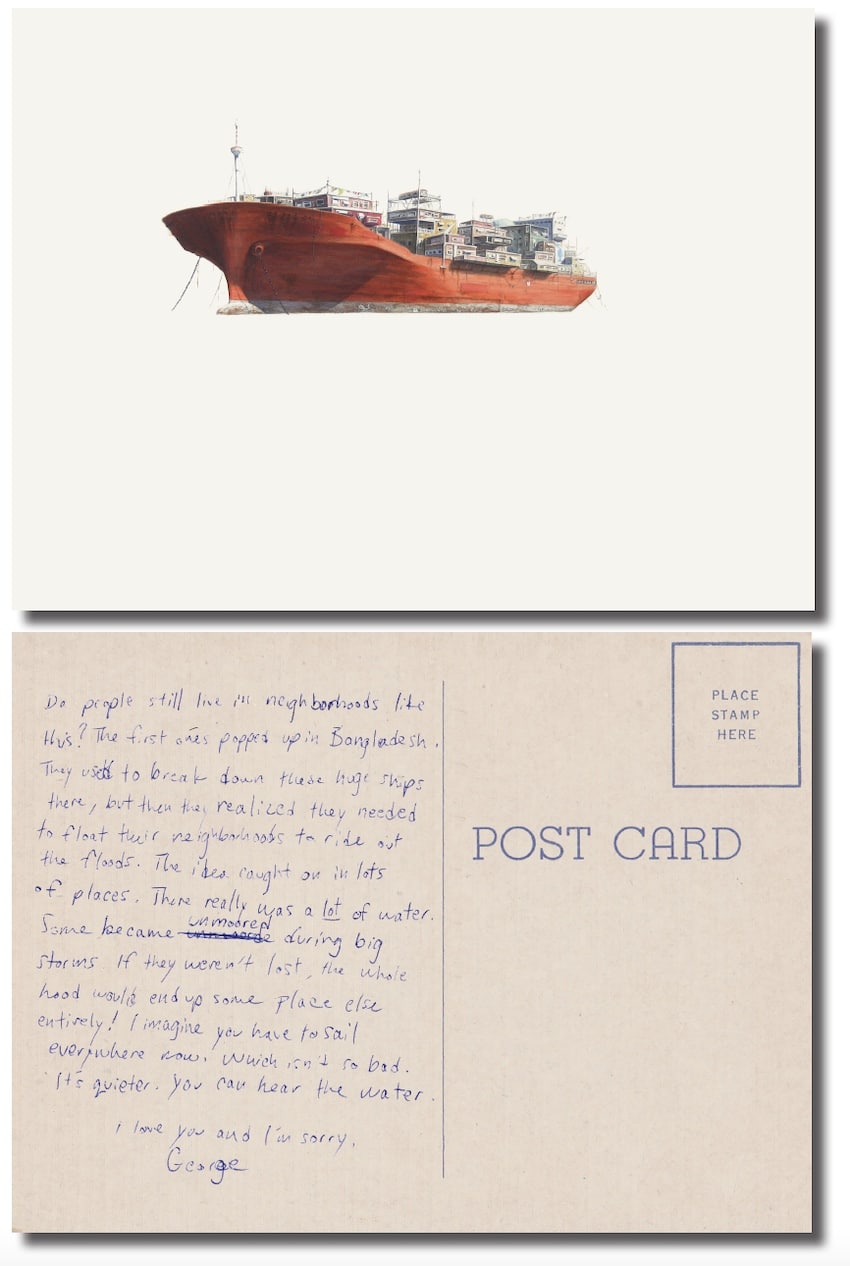 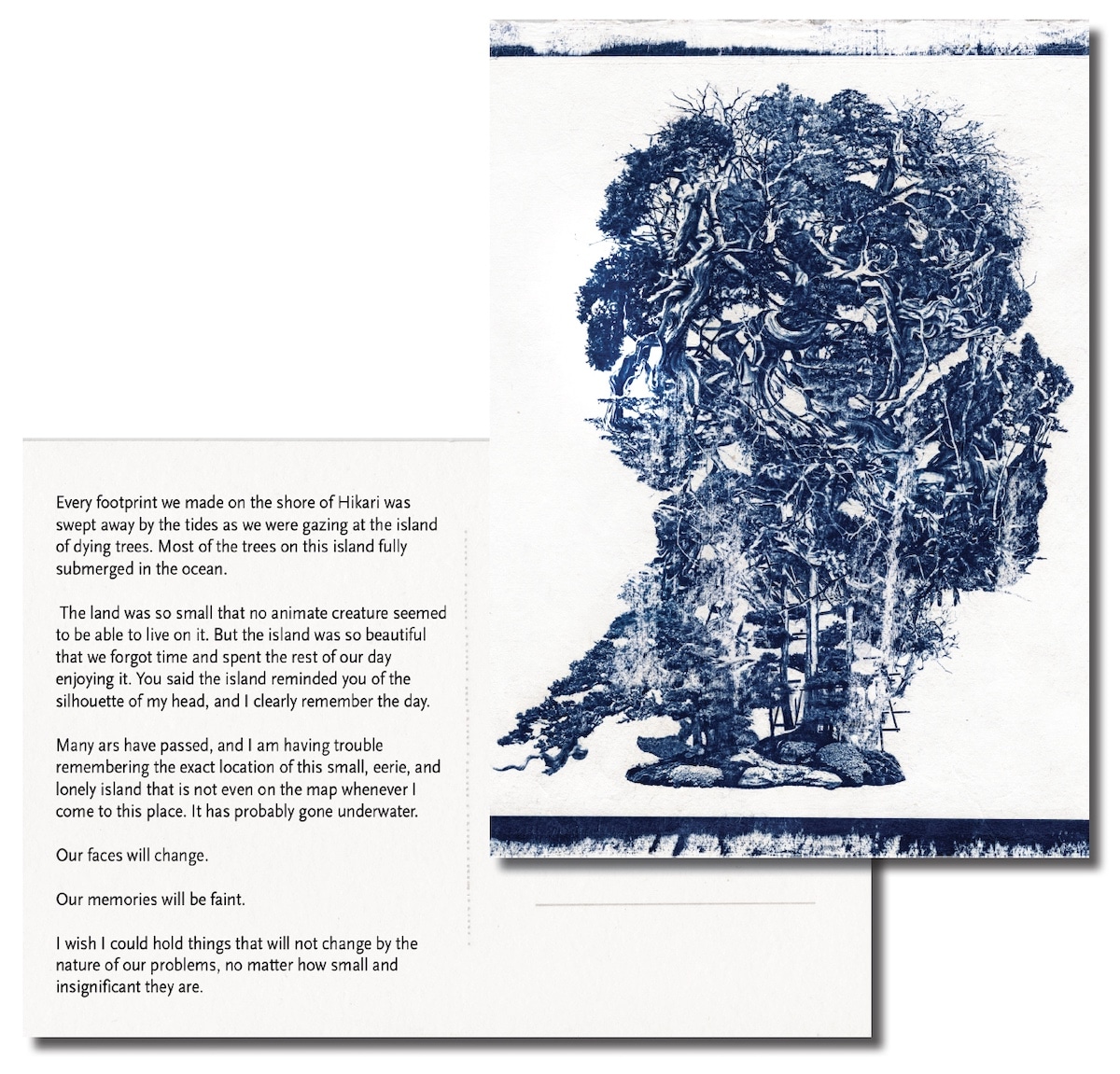 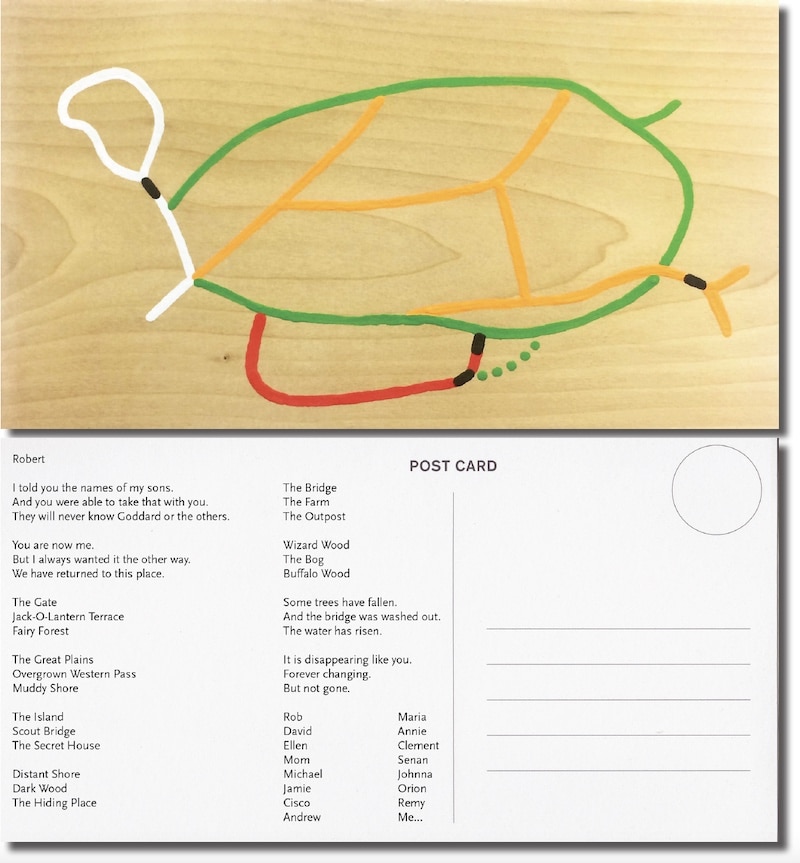 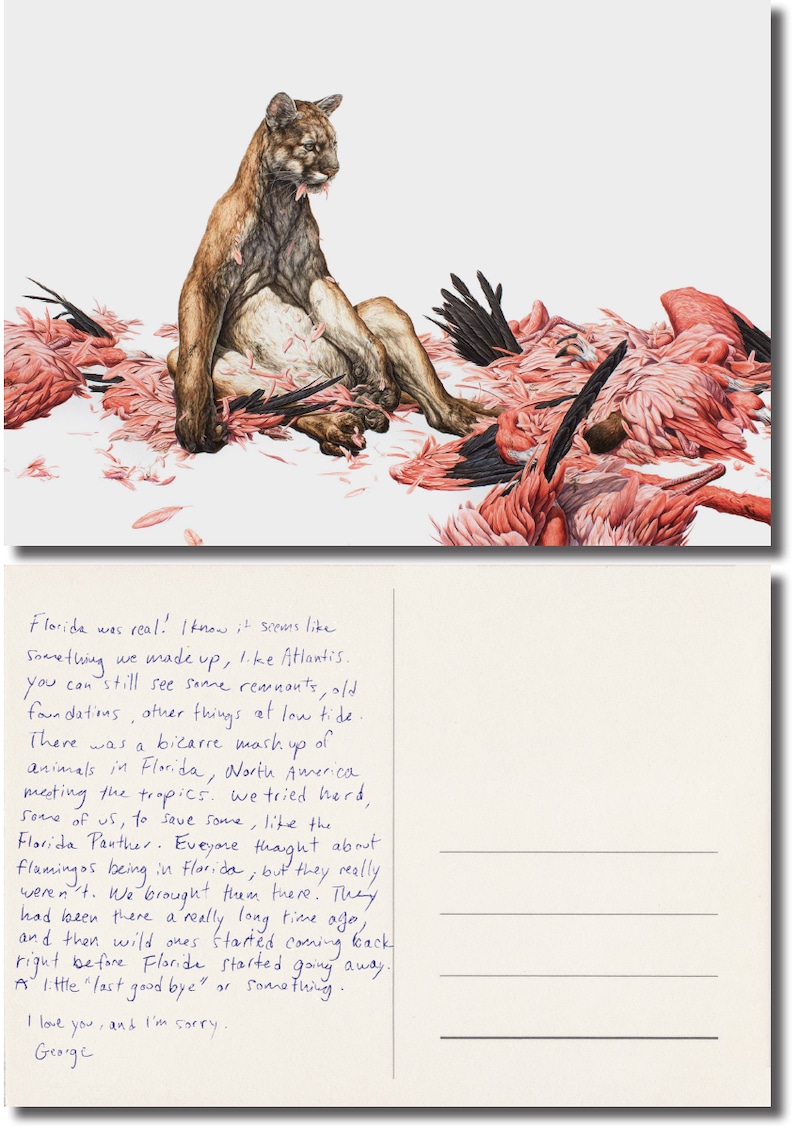 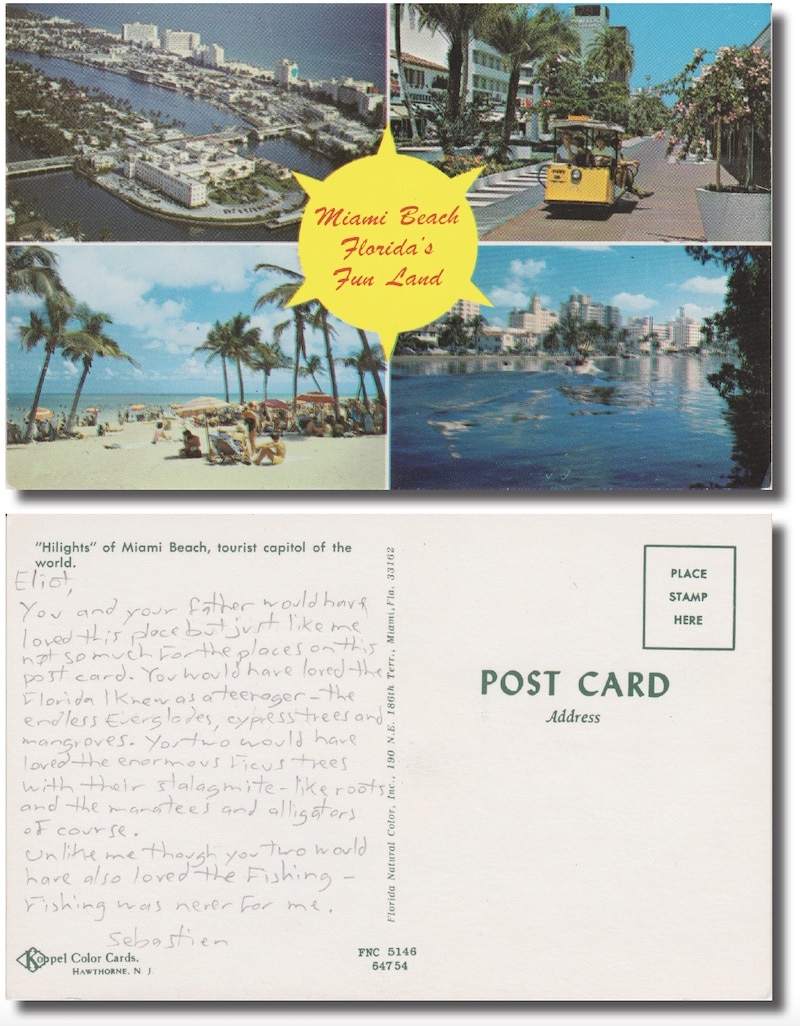 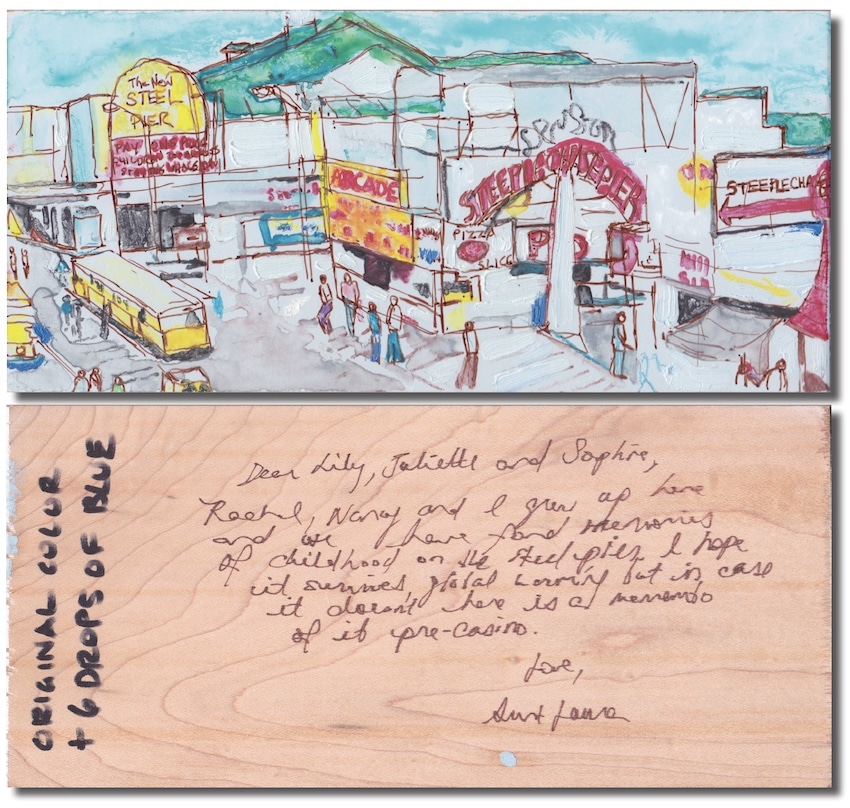 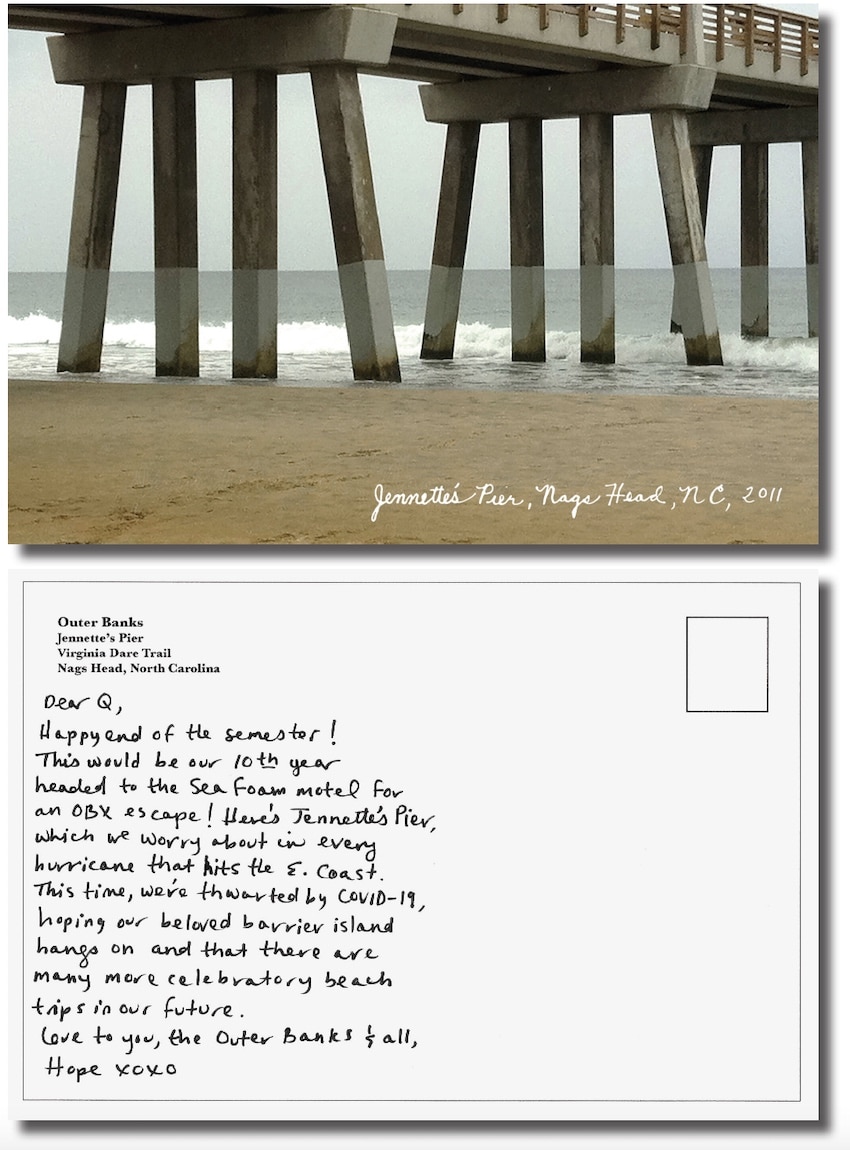 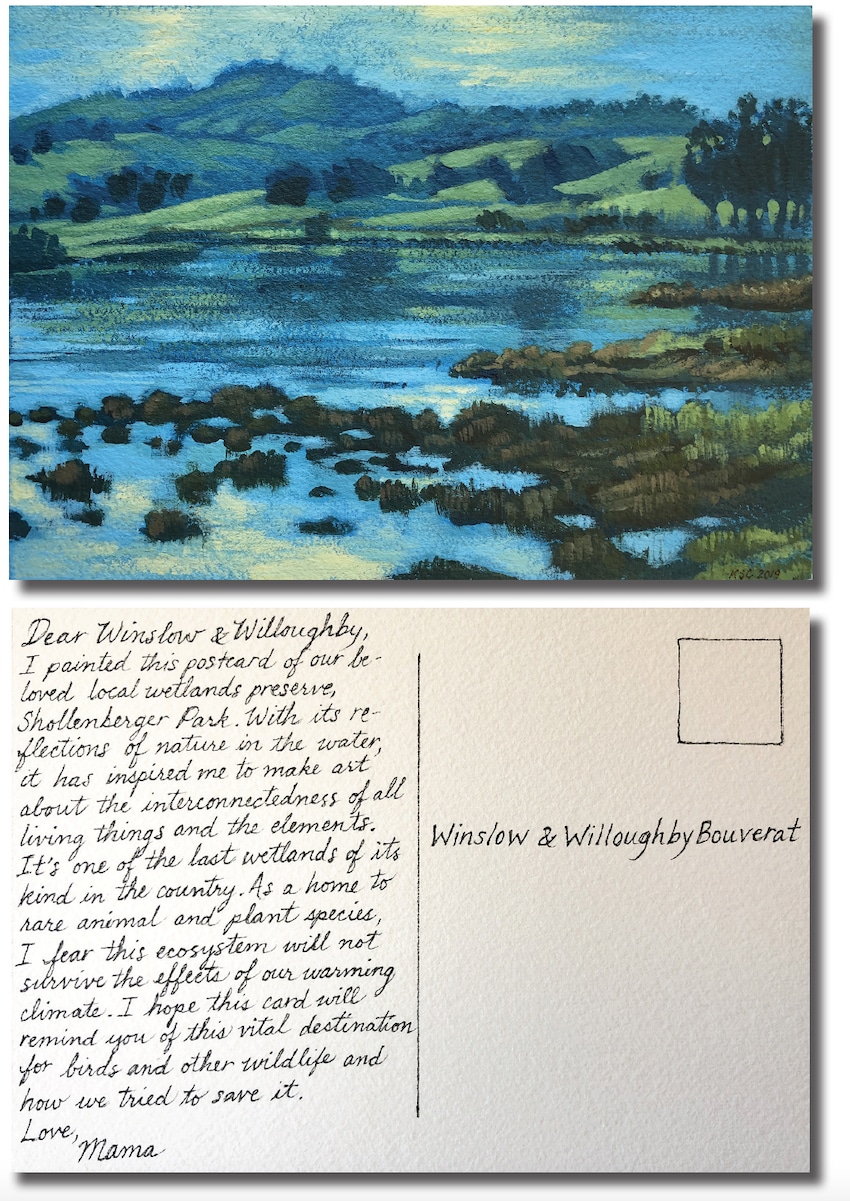 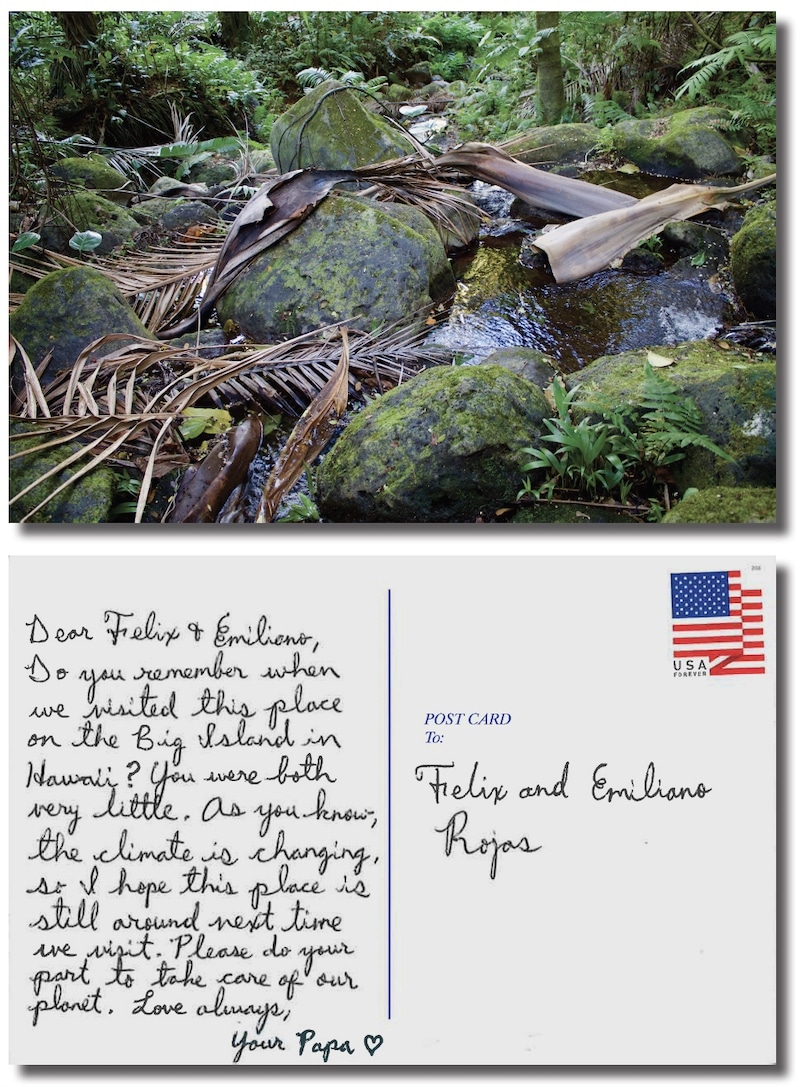 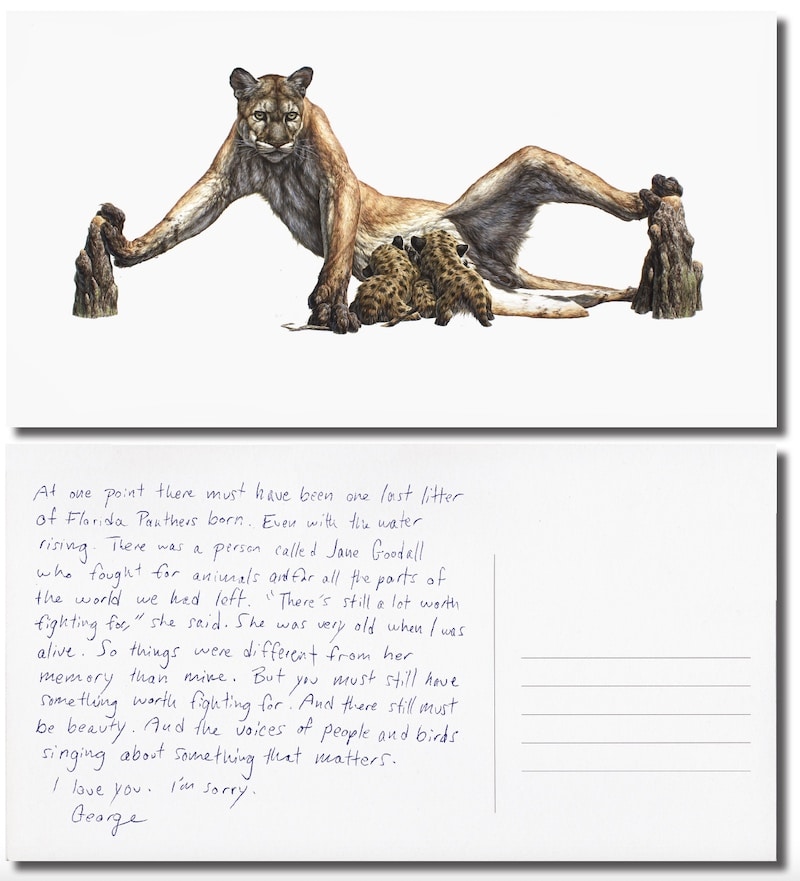 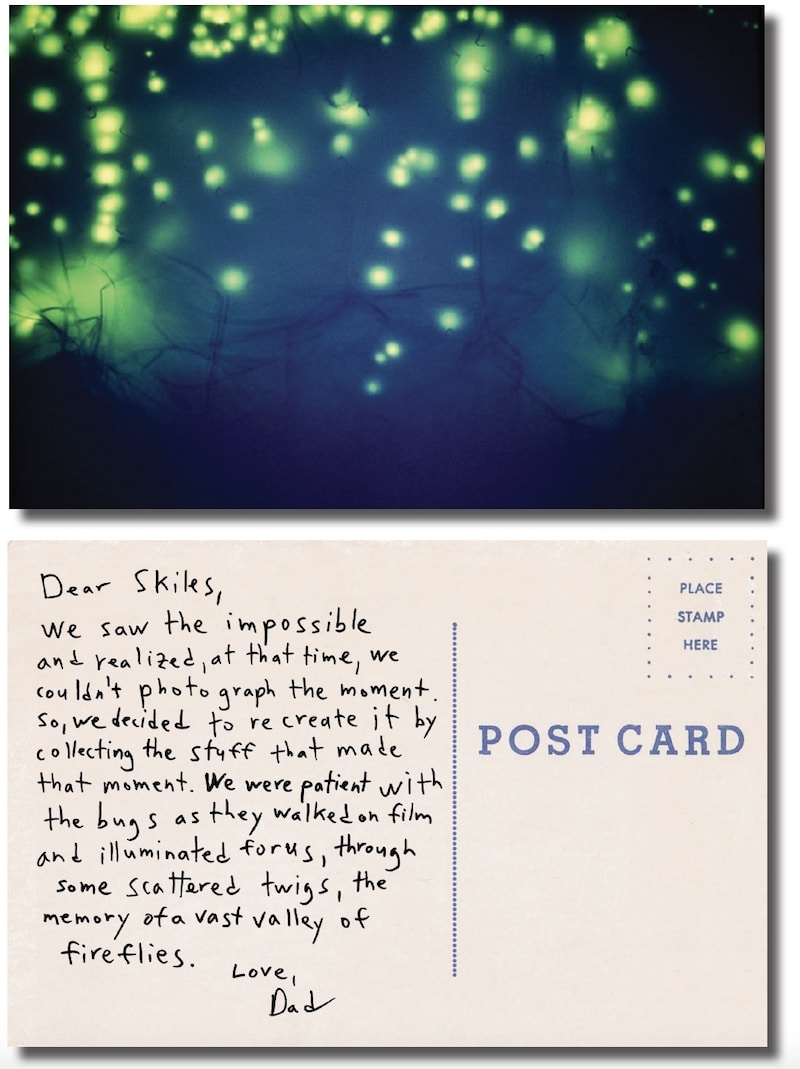 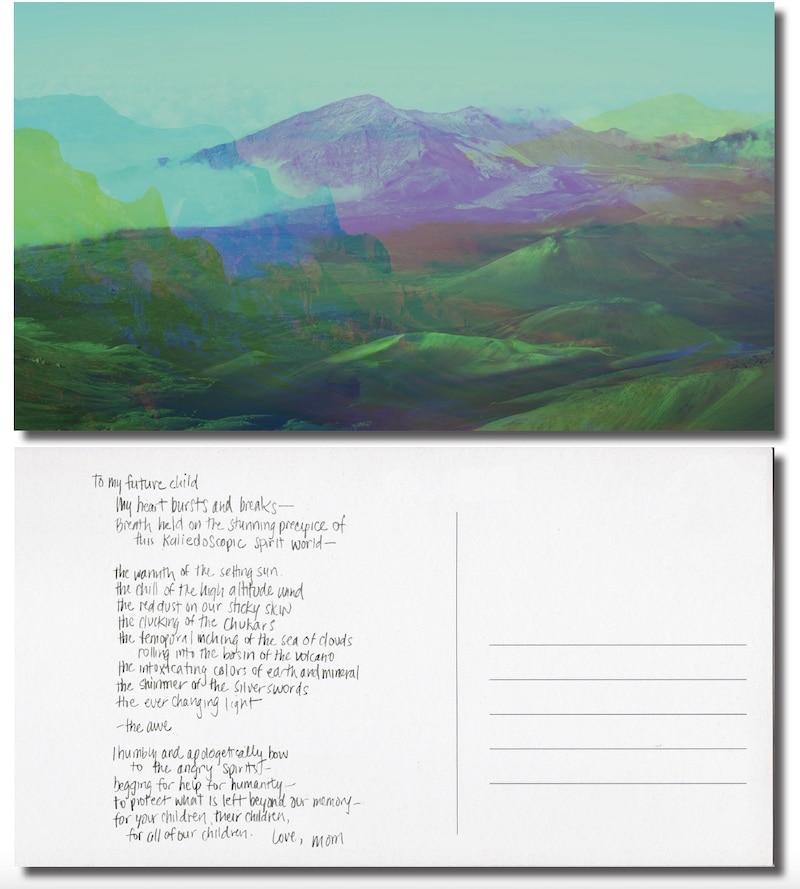 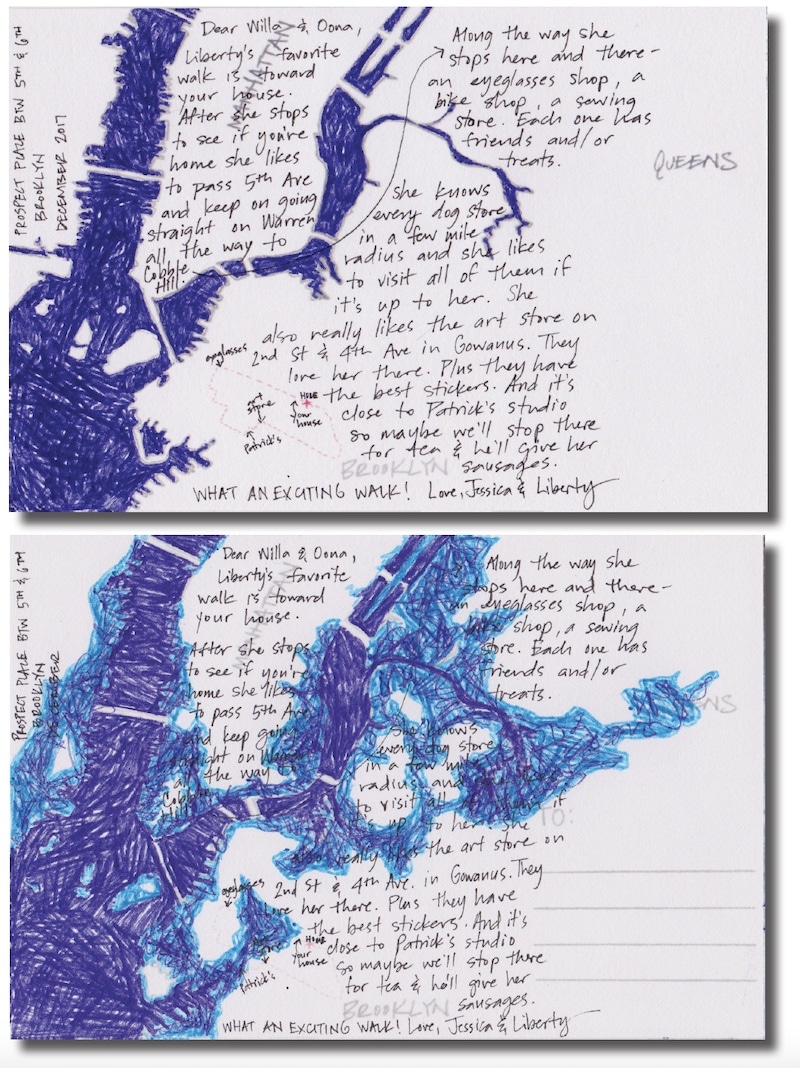