AT THE RESEARCH STATION, I’m greeted by calls to safety, five pages of instructions provided by the H. J. Andrews Experimental Forest, two of which are laminated. There are exhortations to slow down, to drive no faster than fifteen miles an hour, to not walk alone at dawn or dusk for risk of cougar encounters. Clear directions are posted at waste disposal sites to not contaminate the surrounding area, and the debris flume used to study erosion dynamics during landslides is festooned with warnings: OFFICIAL USE ONLY. Inside the laundry room, each dryer has a sign taped on it reminding you to clean the lint cage before and after use, lest a spark ignites a fire, lest you send the entire Willamette National Forest up in smoke.

I’ve come here to spend two weeks writing, surrounded by an old-growth forest a few hours east of Eugene, Oregon. More accurately, I’ve come to write inside my climate-controlled, heated-floor apartment that abuts an old-growth forest. I’ve come to escape the city for a bit, a city where I’m constantly on alert for dangers, only to find that there are just as many things here that can kill me, too.

Much of the work at the research station is executed in the name of safety: charting the deepest point in Lookout Creek during heavy rains; plotting the physics of debris during a flood; finding reclusive spotted owls and encouraging the doomed species to breed. Even the microscopic examination of decay inside a fallen tree begs the question: How quickly does everything fall apart?

In science, safety is paramount, and yet this is no requirement for art. To the contrary, work that “plays it safe” too often panders to those in power, and the most visceral art is not created from a place of safety. Although art that is risky is generally considered positive, risky science is not.

I am a safe queer to invite to a research station, funded by federal money. I am white. I pass as a cis man in public, especially in my hiking clothes. I am quiet. My art exists largely on the page, which can be dangerous. But so far my art has not been particularly safe. It looks at the quiet realities of lives like mine, how lives like mine exist in rural spaces, how lives like mine often fly under the radar for safety. As a writer and an artist, I hold strong to the belief that art is necessary to change the status quo, to confront power, to force it to reckon with the realities of the other. But my work does not always do this; it doesn’t even usually do this. It doesn’t feel risky, like the work of artists I admire most for putting a stamp on the world.

Soon after being diagnosed with AIDS in 1985, the artist David Wojnarowicz embarked on a solo road trip to the southwestern United States. At one point, he recounts driving a stretch of desert highway while playing a risky game:

“I play games with the road to shake myself up, at times squeezing my eyelids closed so that I drive quarter-mile stretches without sight and it becomes a fight to open my eyes before the side of the road overtakes me. It’s as if a second person is sitting within my body at the wheel. The body that holds the wheel understands the danger that mounts by the moment and the second body smiles in the dark interior of the first. When the eyes finally open, they reveal nothing new about the world except a slight shift in landscape proving that increased mortality teaches me nothing.”

Wojnarowicz’s paintings don’t get much attention compared to the rest of his work, and it’s easy to see why. They lack the fierce immediacy of his films and photographs, like Fire in my Belly (1987), which caused an international incident in 2010, when the Smithsonian censored the film, part of which showed ants crawling over a crucifix. But his paintings, whether on purpose or due to the medium, are reminders that even the most provocative artists can also be meditative.

One such painting, WATER (1987), depicts a coal-fired power plant on the horizon painted in muted blues and oranges. Over this background are a half dozen or so circles framing scenes of gay sex, frogs, and sperm, something he describes “like looking into the interior of something, like looking at a spot of blood and seeing the cells. For me the circles are like cells that contain information. . . . I see them as microscopic views, and I also see them as telescopic views.”

WATER holds both a macro and micro view of science within its floating orbs. “That says something to me about surveillance,” Wojnarowicz goes on to say. WATER is a work about opening up pockets in the environment for queer life to thrive, in full view of the telescope or microscope. And yet, this painting would not be the first to come to mind when thinking about work that draws its power from the land. This kind of art often remains limited in the popular imagination, limited to simple descriptions of waterfalls, photorealism, paintings of trees, Andy Goldsworthy’s arrangements of rocks and leaves, Robert Smithson’s Spiral Jetty. Work like this is meant to spur its audience to remember how important nature is, but only when it’s separated from the human subject. It’s safe, because humans are nowhere to be seen.

Though surface-level safety protocol in the field of science sometimes obscures a much larger planetary moment of, say, climate risk, to perform quality scientific work, safety is critical. A wounded scientist cannot complete a good experiment, though I suppose neither can an injured artist, although when they do, it’s usually arresting, like Hannah Wilke’s documentation of her losing battle against lymphoma in Intra-Venus (1992–1993), or Catherine Opie’s Self-Portrait/Cutting (1993), in which the bright red cuts on her back make up a childish illustration of a happy family. Safe science is good, vital. Safe art is boring.

After a week of walking through the research station’s ancient forests, one day I drive to Wolf Rock. When planning my trip, I didn’t realize I’d be scaling a mountain, the approach being a forty-five-degree angled dirt road. I drove past large piles of brush covered in black tarps, a miniature quarry, and orange signs warning of oncoming logging trucks. Not a single other person. I kept going. 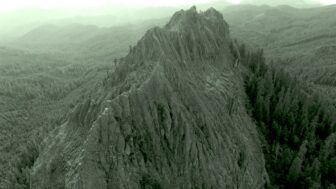 Back home, in Portland, whenever I left my home, I felt unsafe—rationally or not—and so I sought out the tranquility of the natural world, the comparative safety of the woods. Of course, there are other dangers here in the forest, but I’ve come to think that danger and safety are not directly related. For any reliable scientific experiment, rigorous testing must be required to establish causation, but feelings of danger don’t always, or even usually, decrease as safety increases. As I acquire more trappings of a middle-class life, do I feel any less vulnerable, less in danger? I wonder whether safety is actually a quantity pinned to health, survival, and well-being; and if not, what else might it measure?

There came a moment when I doubted what I was doing, and then the sheer rock face of Wolf Rock looked up in front of me and I broke into a smile. At one point, I turned around. It was worth it to feel increasingly unsafe, to see something interesting, turn around, and head back to safety.

During a period when David Wojnarowicz was experiencing severe depression and using heroin, he met up with his mentor and friend, photographer Peter Hujar. David was dissociating badly as he held out his arm of track marks, “like a long-distance scientist showing another scientist a weird animal relic.” Instead of offering sympathy, Peter told him to keep away if he continued using: “I won’t be friends with you if you’re going to do that.” Peter reached out and rubbed David’s arm. Harsh words, gentle touch. David wrote that he never used heroin again.

There are limits to the dangers we put ourselves in and still survive. We need friends to call us back, individuals and communities who will step in and care for us when we’ve gone too far. Especially for artists whose experiments are too risky to be supported by institutions—universities or museums—these relationships are the only HR available to hold us accountable for the risk we pose to ourselves.

On my way back from Wolf Rock, I stopped at a stream and found a rock that had been polished into a perfectly smooth cradle. Despite the fact that it was October, I undressed, set the timer on my camera, and after some ungainly splashing around in the freezing water, I took a picture of myself. Until that moment, I’d never seen a body like mine in a nature photograph. For some, to perform such an action would be too unsafe. For me, after I put my clothes back on, I looked again at this clearing I had known only for fifteen minutes and felt like it belonged to me in a way it hadn’t before. Though I’d felt incredibly unsafe and shaky while taking the photograph, skinning my knees on stones, now, having gone through the experiment, I felt transformed. Perhaps that’s what safety really is, not the quick fix of a hard hat or guided trip, but, rather, a variable to be measured over time, something we must pass through and remark upon, and, ultimately, to leave behind on the way to making work that will shape the world.

Callum Angus is a trans writer and editor currently based in Portland, Oregon. His first book, A Natural History of Transition, is out in April from Metonymy Press. More of his work can be found at calangus.com.