Eric Wagner writes about science and nature from his home in Seattle, Washington, where he lives with his wife and daughter. His writing has appeared in High Country News, Scientific American, Smithsonian, Audubon, Slate and elsewhere. He has a Ph.D. in Biology from the University of Washington for work he did on penguin behavior at the world’s largest colony of Magellanic penguins, in Punta Tombo, Argentina.

The Piccolo and the Pocket Grouse

I. NIGHT BLACKBIRD SONG, for two piccolos (one doubling on flute) and three percussion (1999) The piece starts with a bang, as the long, drawn-out cry of piccolos brings the listener Continue reading → 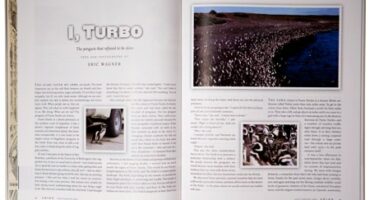 THE SCARS COVER MY ARMS, my hands. The most impressive are on the soft flesh between my thumb and forefinger, two-inch-long seams, angry and pink. I’d use them to get sympathy, Continue reading →

WAYNE JOHNSON KNOWS what you think of him. He knows that you think he’s a killer, a bum, a drunk, a thug, a savage. He knows because he reads his press, Continue reading →