Winona LaDuke is an American activist, environmentalist, economist, and writer, known for her work on tribal land claims and preservation, as well as sustainable development. In 1996 and 2000, she ran for vice president as the nominee of the Green Party of the United States, on a ticket headed by Ralph Nader. A Native American with Ojibwe ancestry, she is the executive director of both White Earth Land Recovery Project, which she founded at White Earth Reservation in 1989, and Honor the Earth, which she founded with Indigo Girls Amy Ray and Emily Saliers in 1993. LaDuke became an activist in Anishinaabe issues, helping found the Indigenous Women’s Network in 1985. She became involved in continuing struggles to regain reservation land lost since in the 19th century. The WELRP holds land in a conservation trust for the benefit of the tribe. Winona’s editorials and essays have also been published several times in national and international journals and newspapers. Some of her books include The Sugar Bush, Daughters of Mother Earth: The Wisdom of Native American Women, and The Militarization of Indian Country.

IN A DINE CREATION STORY, the people were given a choice of two yellow powders. They chose the yellow dust of corn pollen, and were instructed to leave the other yellow Continue reading → 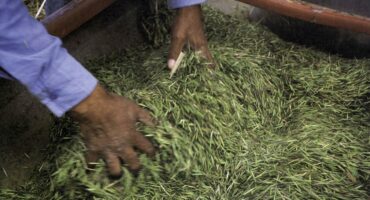 AS FALL TEMPERATURES CHANGE on the White Earth Reservation and the mist lifts off the lakes, the Ojibwe take to the waters. Two people to a canoe, one poles through the Continue reading →