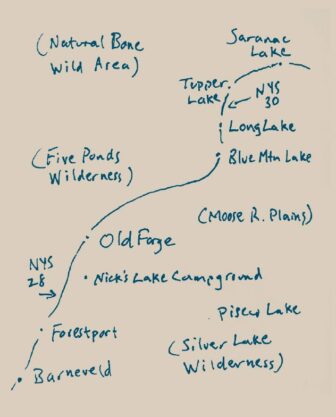 Comment: A return to places I’d been as a young person—Burlington, VT (having ranged first through that city with companions met on the road), Comstock, NY, and the old Great Meadows Prison there, and Albany, where I’d lived in the 1960s and 1970s. Found shelter in Burlington from Hurricane Gloria in a movie theater (Kiss of the Spider Woman, The Ploughman’s Lunch).

I’d wanted to ride across the Adirondacks and David Warren came with me as far as DeRuyter, company for the first forty miles, and then turned off to go back home—Ithaca—a different way, a wide bow south to Otselic Center and then the climb up from Marathon and the Tioughnioga. Hundred mile day for him. Central New York was low rolling hills, a mile for us every five minutes. First night I camped at the state park at Chittenango Falls. The ranger only worked weekends, he said, said during the week he taught high school at Cazenovia. I ran programs there, I said, eight years earlier. I’d fallen half in love with one of the teachers and I asked did he know her. Just the name, he said. And he said I should get an Access Pass, the State’s program I’d not known of—free park admission to disabled New Yorkers—and he gave me a form to give to a doctor. Two nights on, tenting at Old Forge, I dreamed that the town near which I’d lived in the Maritimes—St. George, New Brunswick—was both a town and the top floor of a building; one got there on switchback roads or rickety staircases, either way, both ways. What memory was, I thought later—a sunny picture and then the clearer picture of several rooms. Another Giscombe lived in town (in the dream) and someone showed me a picture of a white girl with “strawberry” blonde hair and a thin face, an old photograph of her as a child. In another, in the town archives, she was with her parents—the father was very dark-skinned and his long hair was in tufts, like grey cumulus clouds, and he had a “lantern” jaw. But the mother was plump and white, pasty in fact, and had one arm. The girl’s name was Daisy, my mother’s name. Apparently I was disabled—the prosthetic arm noted at Chittenango Falls—and I’d considered this as I’d ridden into Old Forge. South Africa was in the news and my sister, in the dream, visited me in town cautiously, wondering if St. George was “like Pretoria.” At the end of the dream it was on fire and volunteer firefighters raced through the switchbacks in rusty pick-up trucks and others took the stairs two at a time but—it was revealed—only the forest, which surrounded the town, was burning. I’d stayed in Barneveld, the second night, with Scott Collins and Rosette Schureman, Rosette pregnant, all of us loose. They still had the dairy then. Leaving Barneveld I swung up into the mountains through Forestport and Woodgate and three days later crossed into Vermont on the Port Kent ferry. Followed the lake south then and then the Champlain Canal—Fort Ann, Fort Edward—to the Hudson River. Sidewall on the rear tire had given out on Blue Mountain Hill and it took two hours and all the patches I had to mend it—at Western Auto in Tupper Lake, least favored of the chain of Adirondack lake towns, I’d bought new tubes and a low pressure gumwall but then limped all the way to dinner at the Hotel Saranac, in Saranac Lake, twenty-five miles on my patches, which held, the daylight holding as well because it was still summer.

From a series documenting several years (1980–2021) of multi-day cycling tours.