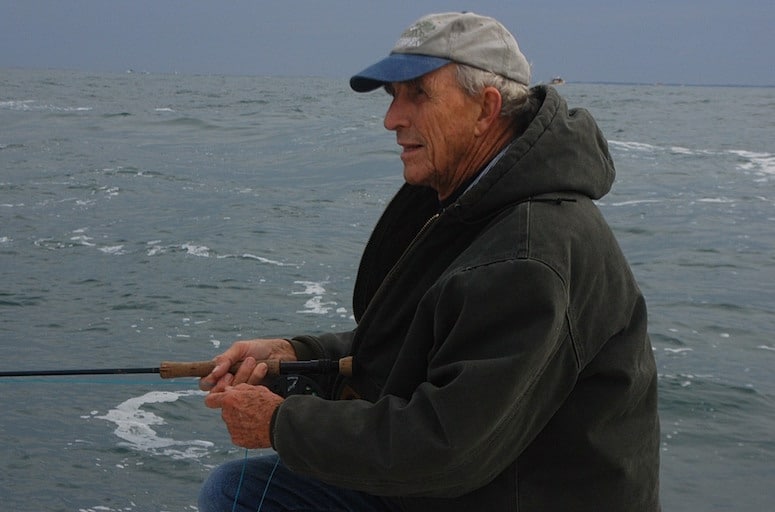 Peter Matthiessen, a longtime friend and advisor to Orion, passed away one year ago on Sunday. Orion author Carl Safina, who knew Matthiessen (they are both from Long Island, New York), offers this remembrance.

I first encountered Peter Matthiessen’s writing when I was around fourteen years old. I’d get off the bus at my suburban Long Island junior high school, head to the library before class, and peruse the writing and photography in books like The Tree Where Man Was Born and Sand Rivers and try to imagine a life lived in such wondrous adventures and with such words.

Fast forward about a decade. A new girlfriend has just come back from Brazil and recommends a book that she hands to me: At Play in the Fields of the Lord. Oh, sure, I think—Peter Matthiessen. A year later I am hiking in the Himalayas and I have with me a little paperback I’ve found in a Kathmandu bookshop, used: The Snow Leopard, by Peter Matthiessen.

About a decade later, while working on my first book, I recall a couple of passages from Matthiessen’s Men’s Lives. One phrase about “a New World gone prematurely old” works perfectly as a quote in a passage I am writing. My editor and I agree that it would be great if we could get an endorsement of my book from Peter Matthiessen for the back cover. I write to him, and to my delight he obliges with a postcard and a kind note about the book.

A year or so after that, I am speaking on a panel about book writing and there, also speaking, is Peter Matthiessen, the giant himself. He is tall, steady, imposing even in repose. He’d always seemed larger than life and now, here and present, he really looks larger than life.

Peter had a fierce reputation that preceded him (the word passed on mostly by editors and publishers), but in the fifteen years or so that I knew him I found him almost inexplicably kind, considerate, and gracious. When we fly-fished together here on Long Island—which is mainly what we did together—we also watched and commented on the many seabirds, sea ducks, and migrating shorebirds.

Though we loved the same place, Peter was from an earlier time and had known it differently. He seemed a kind of timeless character, an elder grown wise without growing old. Peter had sensed enduring truths and sent deep taproots into them, and through those roots he seemed to draw his own inner life. The rhythms and wisdoms in nature. The necessity of paying attention within and without. The folly of short-sightedness. He was deeply committed to Zen practice and teaching, but sufficiently committed to the world to be a vocal and much-felt proponent of justice and conservation.

As a role model, Peter was untouchable. I was always a little tongue-tied around him until the last couple of times I saw him, when I finally let myself relax in his presence. He was my hero, yet I didn’t want to idolize him. That would have been both poor form and bad for my own writing. I didn’t read absolutely everything he wrote, and what I read I didn’t equally love. I thought I sensed in his later nonfiction his own impatience with it, as though he was in a hurry to get back to shaping his novels. (Peter’s nonfiction had thrilled and inspired me, but to him, the real writing was fiction writing. Once, on the way to my boat, he began speaking of the freedom in fiction; in nonfiction he felt confined.)

Peter really was an outsized human being—equipped with an exceptionally sharp mind, a big heart, and a piercing memory, with wide experiences and deep convictions. In comment and in action, Peter stayed committed to fiercely held ideals of quality, integrity, and honesty. He disappointed some friends, he told me, by declining to provide endorsements for their books specifically because they were friends. Objectivity had a value that Peter was unwilling to let mere friendship undermine.

He practiced Zen on a spiritual plane but his pursuit of rightness was sometimes literal and material. A friend told of a time Peter was driving to Montauk in poor visibility and struck a deer. The deer ran off, but Peter could see that it had a broken leg. He pulled over, tracked the deer into the woods to where it had collapsed, and with his hands he ended its suffering.

The last time we went fishing, a day filled with the migratory energies of fishes and birds of autumn, Peter told me that being there on his home waters filled him with homesickness. Quibbling over the word, I queried whether it was more a yearning than homesickness. But Peter wasn’t one to choose words casually, or to use a word that wasn’t exactly the word he intended. Perhaps he was responding to time’s unconquerable tidal retreat. He’d known and loved a different time. We may travel a while together, but we journey alone.

Peter died of leukemia at age eighty-six at his home in Sagaponack, Long Island, on April 5, 2014. The opportunity to know Peter for about fifteen years or so was a gift in my life. I find myself thinking of him frequently, sometimes recalling the comfort of his woofy, measured voice, thinking about him when I find myself on distant shores and landscapes he chronicled in an earlier era. Sometimes I catch myself thinking of him while I’m writing, and when I do I recall again that he set a very high bar for writing sentences, working authentically and originally, living with intent, and valuing one’s time on Earth.

Carl Safina’s book The View from Lazy Point won the 2012 Orion Book Award. His seventh book, Beyond Words: What Animals Think and Feel, is forthcoming in July by Henry Holt and Company. He is founding president of The Safina Center (formerly Blue Ocean Institute), and co-chairs the Center for Communicating Science at Stony Brook University.